Invasion of the (Out-of-State) Body Snatchers

This Halloween, you don't have to go far to hear tales of haunted happenings down at the old graveyard.

Cemeteries can be scary places. But sometimes the dead have more to fear from the living than the other way around.

Take Moses Austin, a pioneer and entrepreneur who played important roles in the founding of both Missouri and Texas.

The gravesite of Moses Austin in Potosi

He helped develop the lead mining industry in Southeast Missouri as well as founding Potosi, the county seat of Washington County. He is better known as the "Grandfather of Texas" because he helped arrange for his son Stephen Austin to bring American settlers into Texas during the 1820s.

Moses Austin is buried at Potosi, while Stephen "The Father of Texas" Austin rests in peace at -- appropriately enough -- Austin, Texas.

But folks in Texas wanted to see their "grandfather" relocated to the Lone Star State. In April 1938, an attempt was made by Texas to snatch his body. Sources vary on exactly what happened, but we know that the invasion was unsuccessful and that Moses now rests under a large concrete tomb to prevent any more grave robbing attempts. 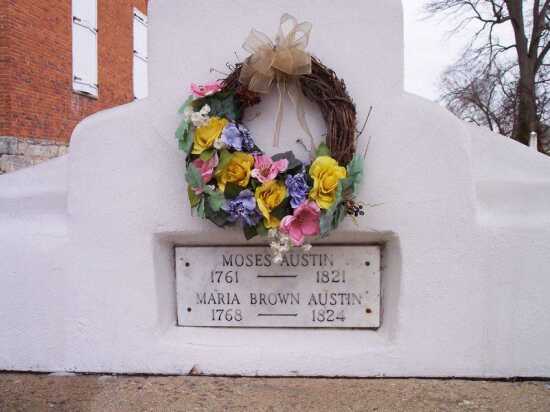 Daniel Boone, however, wasn't so lucky. That poor man has never been able to Rest In Peace.

First he was buried in 1820 next to his wife Rebecca at a pastoral family cemetery near Marthasville, Missouri.

But the folks in Kentucky weren't too happy that their pioneer hero ended up in Missouri. They wanted him back. In 1845, Daniel's remains were relocated to a cemetery in Frankfort, Kentucky, under somewhat dubious circumstances.

Some have speculated that the body snatchers grabbed the wrong body, or that they left behind some of the remains. As usual, the historical truth is sketchy, but it appears likely that Daniel is now buried in two states.

A bronze plaque was erected commemorating Boone's not-so-final resting place in Missouri. Unfortunately, the plaque had the wrong birth information, and the illustration of him wearing a coonskin cap was incorrect (that was Davy Crockett). And then there's the final insult: earlier this year the plaque was stolen for scrap.

The dead just can't get any respect from the living.