Top Ten state parks I'd like to see created

This week's announcement of the naming of Missouri's newest park, Current River State Park, led me to think about other state parks, conservation areas, or public trails that I'd like to see developed.

Missouri has lots of interesting places already on public land that could easily be developed and promoted into popular state parks. Likewise, many historic and scenic places are currently privately owned but would make excellent parks. I'm sure the landowners would like to hold on to these special places (and for good reason), but there's always the chance they could be persuaded to sell in the future.

So with that in mind, here's my Top Ten list of local places that I'd like to see developed into tourist attractions:

Did you know that Perry County has a waterfall? And not just a puny trickle, but a real honest-to-goodness waterfall featuring a sharp drop over sandstone rocks into a plunge pool and deep canyon. It's privately owned, but the area is a de facto park with easy access from County Road 910 north of Perryville. 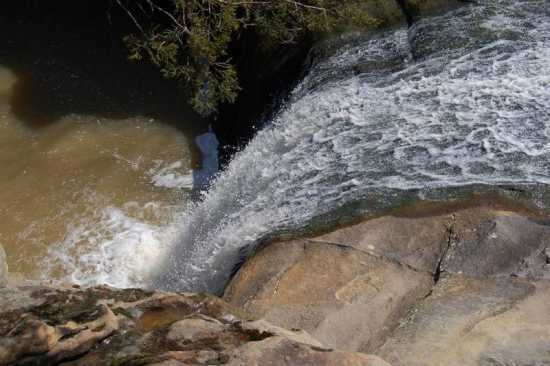 When I visited recently, I didn't see any "No Trespassing" signs, purple paint, or locked gates. I did find some litter and trash suggesting that Falls Branch Falls is a popular hangout. The county road fords the creek (known simply as Falls Branch) and a well-worn trail leads downstream to the head of the waterfall.

Missouri hit a home run when the Katy Trail was developed. This rails-to-trails project across central Missouri has revitalized several small towns. By reusing a discontinued railroad line, the state was able to build a long-distance bicycle trail on the cheap.

But we've got something in Southeast Missouri that could be developed into a trail even cheaper. It's something we rarely think about: the Diversion Channel Levee. Stretching from Greenbrier in Bollinger County to the Mississippi River, many segments of the levee already have an access road along the top that would make an excellent bike trail. 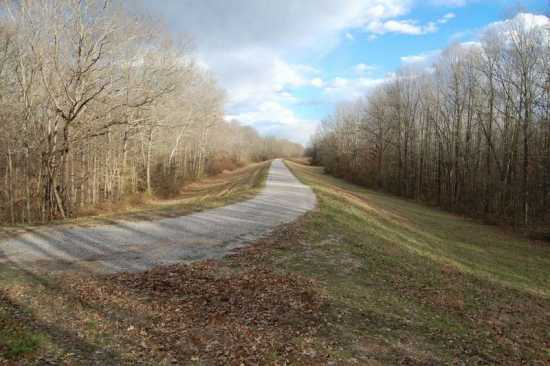 This is the western end of the Diversion Channel Levee at Dark Cypress Conservation Area in Bollinger County.

The Little River Drainage District, which owns and maintains the channel and levee, doesn't have recreation as part of its mission, and probably wouldn't be too keen on this idea. But a trail would give visitors an up-close look at the Diversion Channel, a cornerstone of one of the most ambitious drainage and reclamation projects in history. Best of all, it would cost practically nothing to establish this trail.

Speaking of trails, the Bootheel might have the opportunity for a Katy Trail of its own. Union Pacific has discussed the possibility of abandoning the railroad line between Malden and Lilbourn. While it's not clear if the abandonment plan is still on the table (it generated local opposition in 2006), the line could easily be converted into a trail.

The terrain west of New Madrid may not seem very scenic at first glance (it's flatter than a pancake), but anybody who has seen The New Madrid Fault Finder's Guide knows that the Bootheel is filled with sand boils and other remnants of the New Madrid Earthquakes of 1811-12. With that in mind, the Malden-Lilbourn trail could be promoted as the "Earthquake Trail" passing through the epicentral region of the one of the worst earthquakes in American history.

During the 1800s, Missouri was dotted with water-powered mills. These were the business and social gathering places of their time, but many have been lost over the years. Perry County features the ruins of a surprisingly large mill along South Fork Saline Creek near Brewer.

As the name suggests, the Old Burnt Mill was lost to a fire. But the stone walls of this massive structure remain on private land visible from County Road 840, just off Route NN. 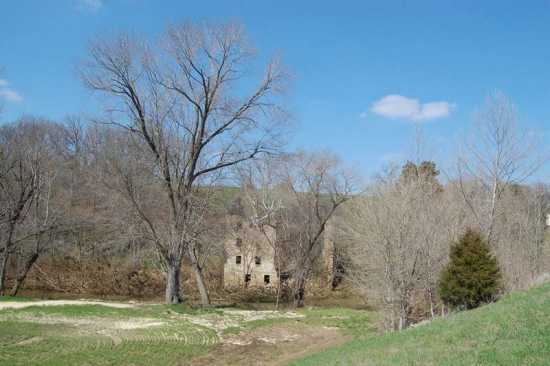 The mill was at the site of a ford along Three Notch Road, the oldest road in Missouri, first used in the early 1700s to connect the lead mines at Mine La Motte with the Mississippi River. This is Missouri's most historic highway and some stretches can still be driven on modern-day county and state roads. Old Burnt Mill and the nearby stretch of Three Notch Road would make a fine historic site.

The mill at Burfordville isn't the only place bearing the name "Bollinger Mill." The Bollinger family built at least two other mills: the first at Zalma on the Castor River (since lost), and a second near Sedgewickville on Whitewater River. The Bollinger Mill near Sedgewickville, also called Dolles Mill after it changed ownership, is still standing and can be glimpsed from County Road 238, just off Route EE. The mill is abandoned, however. 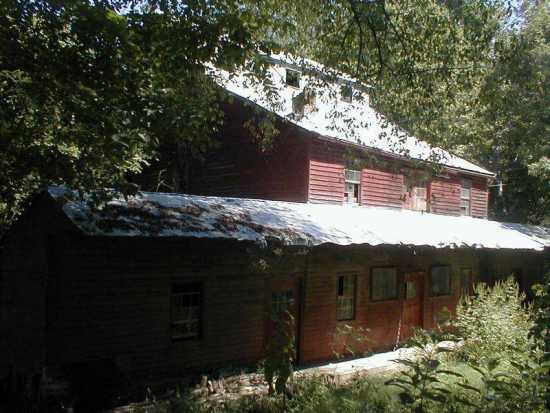 Nearby is a large steel truss bridge over Whitewater River. Since mills were social gathering places, it was common to have mill-and-bridge combinations. The bridge recently failed an inspection and is now barricaded against traffic. Built in 1913 by two companies from St. Louis, Stupp Brothers Bridge Co. and Miller & Borcherding, the Dolles Mill Bridge is one of the last of its kind in Southeast Missouri. (As an aside, Stupp Bros. is still in business and continues to build steel bridges, among other things.) 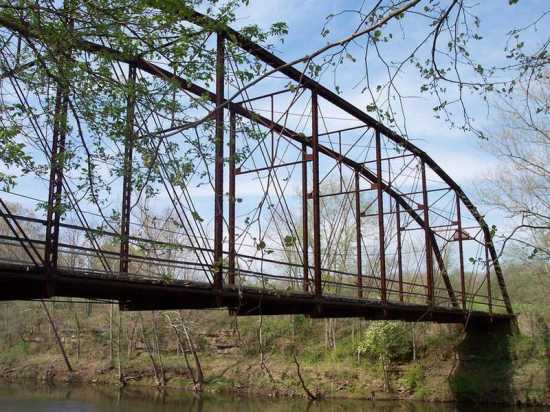 Both the mill and bridge could make easy targets for a successful historic preservation project.

While the Mississippi River has several public boat ramps above Cape Girardeau, there is a gap north of Trails of Tears State Park. Hines Landing, an old settlement beyond the end of Route CC in northern Cape Girardeau County, would make a perfect river access point. County Road 535 dead-ends just short of the river here, but at present there's no way to cross the railroad tracks and reach the river bank without trespassing. 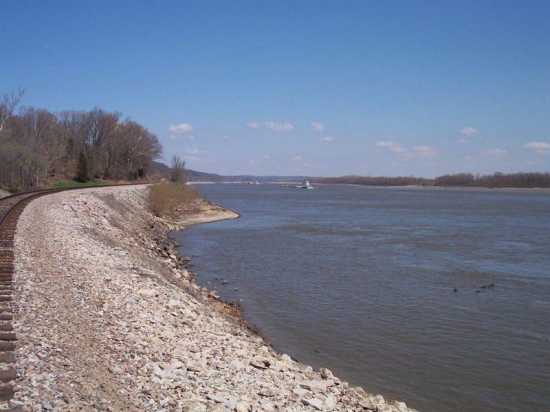 Hines Landing provides a panoramic view of the river.

South of Ste. Genevieve, not too far upstream from the Highway 61 bridge over Saline Creek, lies the site of Missouri's first industry. Early settlers took advantage of a salt spring along the creek to provide desperately needed salt for preserving meat. The salt works was a major enterprise and played a key role in Ste. Genevieve history.

Some artifacts from the salt works are on the display at the Ste. Genevieve Museum, but the actual site is privately owned and not accessible to the public.

One of the most scenic drives in Missouri is along Route E in Madison County, which provides an alternate route between Fredericktown and the Arcadia Valley. While some of the land along Route E is national forest, it's difficult to enjoy the scenery because of a lack of places to safely park.

Take, for instance, this small shut-ins that sits immediately next to the road opposite St. Francis River: 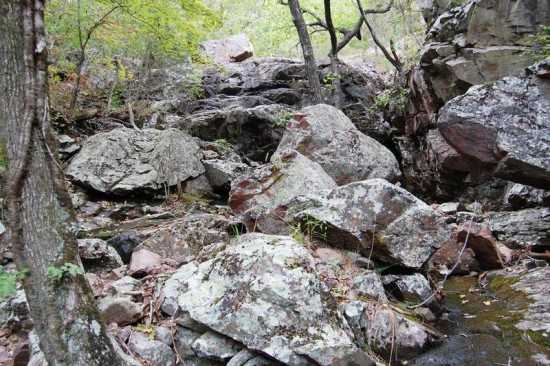 The only way to explore it is to park on the narrow shoulder and hope that passing motorists are paying close attention to the road. With some parking areas and marked trails, this whole area could become a crown jewel within the Mark Twain National Forest.

When traveling southwest on Highway 25 past Delta, it's always such a shock to see the talls bluffs of Hickory Ridge tower over the surrounding flat farmland. It's not hard to imagine the bluffs forming the centerpiece of a nice Delta city park or conservation area.

The junction of the Ohio and Mississippi Rivers at Cairo, Illinois, is a key site in American geography and history. While the Illinois bank already has Fort Defiance Park, some of the best views are from the Missouri and Kentucky shores. Combining all three sides into a public park would make for a spendid "interstate park" -- or even a national park. 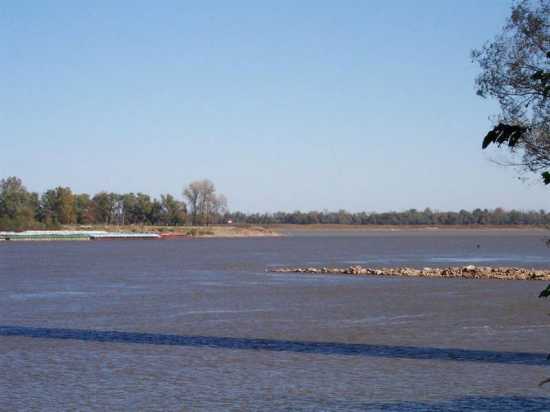 The Missouri shore, at a place long known as Birds Point, provides an excellent vantage point for the confluence of the Ohio.

Are there any other places you'd like to see developed into state parks or conservation areas? Let me know.