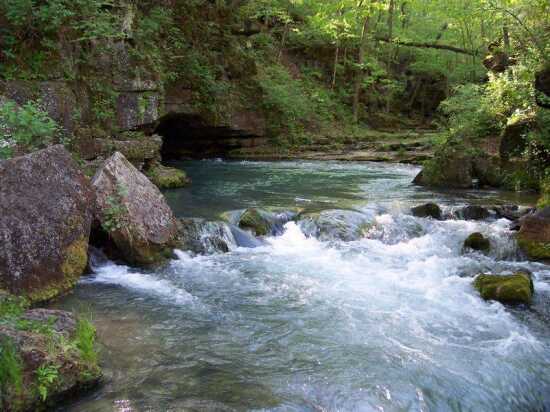 With an average daily flow of 222 million gallons, Greer Spring is beat only by Big Spring (286 million) and Mammoth Spring (234 million). However, Mammoth is located on the Arkansas side of the state line (by only 500 feet), so that means Greer Spring reigns as Number Two among Missouri springs.

Water emerges from a cave entrance at the head of a deep ravine and then cascades down a spring branch before entering the Eleven Point River. 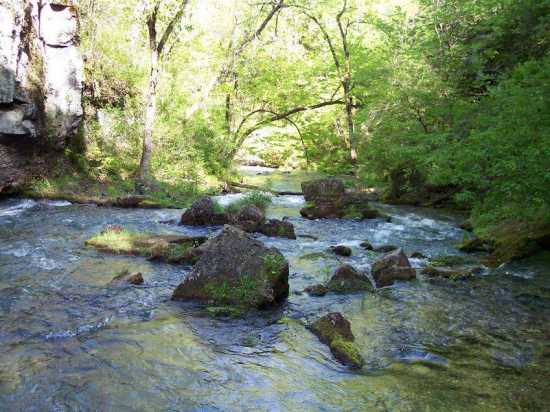 Dropping over 60 feet over the course of a mile-and-a-quarter, the spring branch is quite wild. It's too dangerous for boating. For that matter, just walking across the slipppery rocks is a nerve-racking experience. 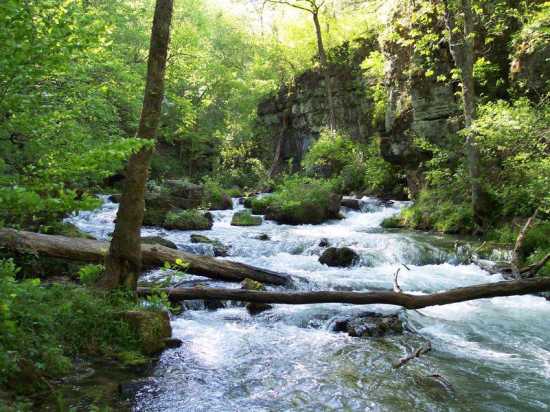 The spring branch provided plenty of power to operate a mill, an opportunity seized by Samuel Greer who built a mill here before the start of the Civil War. The narrow ravine didn't provide any room for expansion, so Greer constructed a new mill in 1899 at the top of a ridge, three-quarters of a mile away. This required building a series of cables to convey power from the spring water. It was a crazy scheme, but it operated successfully until 1920 when the mill became obsolete by cheaper methods of making flour.

Curiously, the spring itself was sold to Cape Girardeau's own Louis Houck in 1904. The Dennig family took over control of the spring and mill property in 1922, using it as a private retreat. An attempt was made by Anheuser-Busch to open a bottling plant here, but public outcry eventually led to the purchase of the spring by the Forest Service in 1993.

As part of the sale, the Dennig family negotiated to retain exclusive rights to the mill for 20 years, so the mill property remains off limits to the public until 2013. The spring itself, with a one-mile hiking trail from Highway 19, is open to the public during daylight hours. 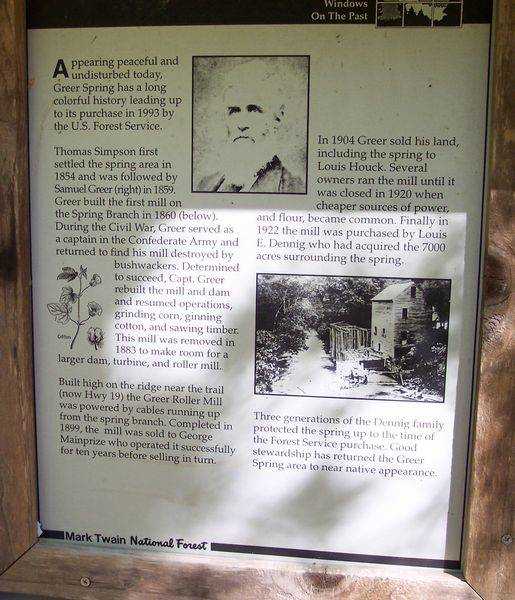 The information panel at the trailhead describes the history of the mills.

Despite the distance from Cape Girardeau, these three places (Falling Spring, Cupola Pond, and Greer Spring) offer more than enough reasons for a roadtrip.

Take Highway 60 west from Van Buren to Winona. Make a left on Highway 19 South and follow this roller-coaster road for roughly 18 miles until you see the Greer Spring trailhead on the right. The trailhead is located along the top of the ridge after crossing the Eleven Point River.

What: Second largest spring in Missouri

Where: Oregon County, south of Winona