Take, for instance, the original site of Greenville, county seat of Wayne County. The town was founded because of easy access to St. Francis River, but the river constantly flooded Greenville and other towns.

To control the river, Congress authorized the construction of Wappapello Dam, completed in 1941. However, this meant that Greenville had to move, as it would be located within the upper reaches of Lake Wappapello.

The entire town was relocated to "New" Greenville, two miles to the north. Left behind were streets, sidewalks, steps, alleys, and foundations. These traces still remain: 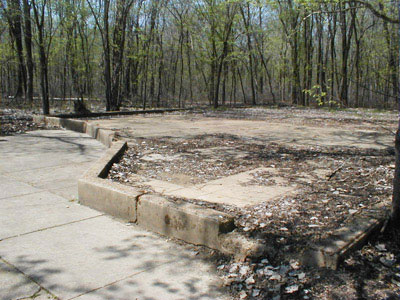 Foundation from a storefront along Timmons Street 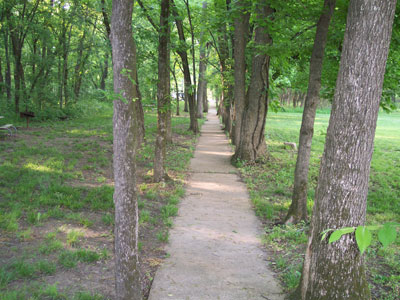 A sidewalk to nowhere 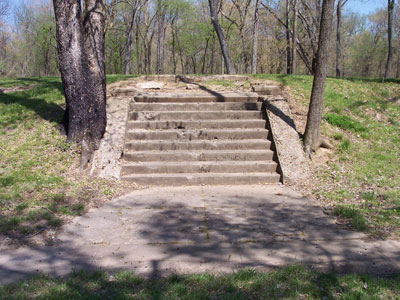 Steps leading to the site of the courthouse

What's left of the town can be visited by walking along Memory Lane, a one-mile trail that follows some of the the original streets. The site is listed on the National Register of Historic Places and is part of a U.S. Army Corps of Engineers recreation area. 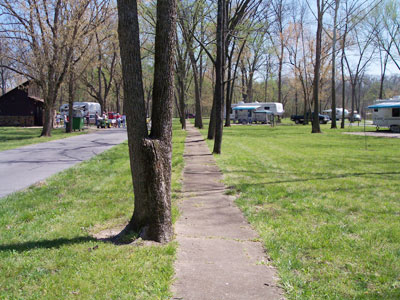 From Cape Girardeau, take Highway 34 west through Marble Hill and follow it all the way to the junction with US 67 at Silva. Turn left and take Highway 67 south through Greenville and continue two more miles to the turnoff for Old Greenville Recreation Area on the right (if you cross the bridge over the lake, you've gone too far.)

According to Google, Old Greenville is just under 70 miles from Cape Girardeau.

(I'll cover these in future blogs)

* Johnson Tract Trail, a 5-mile hike that passes old homesteads along an abandoned road east of Old Greenville. The trailhead is on Route D.

* Sam A. Baker State Park, one of the first state parks in Missouri

* Lon Sanders Canyon, a shut-ins within the outskirts of Piedmont

Designation: Listed on the National Register of Historic Places