Before the Taum Sauk Reservoir collapse, Johnson's Shut-ins was one of the most popular state parks in Missouri, sometimes requiring long waits at the entrance gate during summer weekends. When the park closed, many people were eager to find an alternative swimming hole for those hot summer days.

The crowds made a beeline for the next best thing, Castor River Shut-ins near Fredericktown. What had been a secluded park quickly became one big party spot during summer weekends.

Johnson's Shut-ins reopened this month on a limited basis, but Castor River Shut-ins has been discovered, and it's never going to be the same.

When I visited last weekened, the parking lot was overflowing and several groups of partygoers were carting around large coolers of adult beverages.

If you like to party, this is definitely the place. If you want to enjoy nature, however, I'd recommend staying away during the summer. 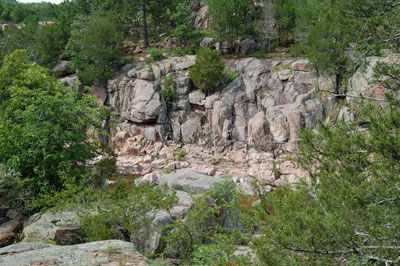 The first glimpse of the shut-ins from the trail

The shut-ins are some of the most spectacular in the state, featuring pink granite rock instead of the usual blue-gray rhyolite seen at Johnson's Shut-ins. Castor River is generally a flat, placid stream, but here it cascades through jumbled granite boulders. Over the years, the river has attempted to erode through the hard granite, but has only been able to cut a narrow channel, creating the shut-ins. 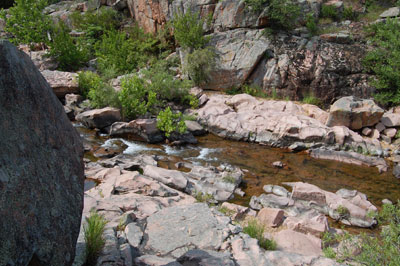 It was difficult, but I managed to take some photos of the shut-ins without any raucous partygoers. 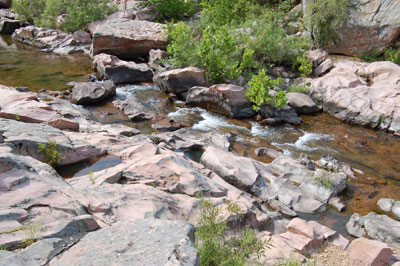 Here is a close-up of the water. The flow isn't quite as good as at Johnson's Shut-ins.

This area is part of Amidon Conservation Area, a large tract of public land that also includes the former sites of two mills (Hahns Mill and Mill Shoals Mill) and part of the old road between Jackson and Fredericktown (now County Road 208). 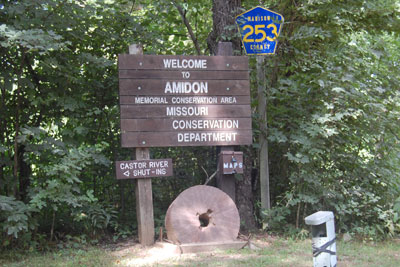 The entrance sign to the conservation area, featuring a millstone from Hahns Mill

These directions follow a somewhat roundabout route, but the roads are well-maintained and well-marked.

3. Continue on Route HH for 6 miles until the T-junction with Route J, and then turn left.

4. Stay on Route J for a couple miles and then turn left at the intersection with Route W.

5. Drive on Route W until the pavement ends, and then bear left on County Road 208.

6. While on CR 208, keep your eyes peeled for the Amidon Conservation Area sign and make a left on CR 253.

7. Take CR 253 until you see the parking area on the right. From here, the trail to the shut-ins is an easy one-third of a mile walk.

Note: Some maps show other roads that appear to be shorter. However, two of these, Madison County Road 249 and Forest Road 2145, dead-end at private property and no longer connect. Another, Bollinger County Road 928, requires fording Castor River. Finally, Madison County Road 208 does connect with Highway 72 to the west, but requires a sharp right turn from the highway that is easy to miss, and doesn't shave off much distance anyway.

This route takes advantage of the interstate and then cuts across using scenic back roads through Bollinger and Perry counties.

2. Turn left on Route KK and continue west until the roads ends at Highway 51 in Bollinger County.

5. From here the directions are the same as above: Continue to the end of pavement on Route W, bear left on CR 208, and then turn left on CR 253 at the conservationa area sign.

Claim to fame: Only granite shut-ins in Missouri