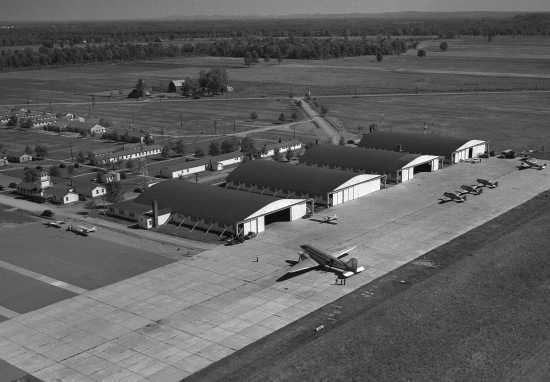 From December 1942 to March 1944, Harris Field was home to eight barracks, a headquarters building, a mess hall, PX and infirmary, as well as athletic facilities and an obstacle course to keep the cadets fit. (Southeast Missourian archive photo)

With Imperial Japan expanding across Asia and Hitler's Third Reich conquering Europe, American war planners knew that our military would soon need pilots. Airfields popped up all across the country, including several in Southeast Missouri.

In 1943 the military built Harris Army Airfield - now Cape Girardeau Regional Airport - turning farmland south of the Diversion Channel into a virtual city with dozens of hangars and buildings. By the time the military started drawing down its pilot training programs in 1944, Harris Field had produced over 2,500 military aviators and would serve as the temporary home to over 1,000 military aircraft while the government auctioned off its surplus equipment.

Chester Army Airfield, which is now Perryville Municipal Airport, churned out pilots from 1942 to 1944.

The Cape, Perryville, and Sikeston airports were all known as Primary Pilot Training. Cadets flew two-seater aircraft before moving on to the next level of training which was Basic Pilot Training.

From 1943 to 1945, Malden Army Airfield's four training squadrons honed the aspiring flyboys that had graduated primary training, teaching them more advanced skills such as formation flying, landing at night, and how to use the radio before moving on to the next step: advanced training. Glider pilots and troop transport pilots also trained at Malden.

When the Korean War broke out, the Air Force started pilot training up again at Malden Air Base with the 3305th Pilot Training Group during the Cold War period from 1951 to 1960. Famous trainees to come through Malden include Apollo 13 astronaut Jack Swigert (former Capt., USAF) and Maj. Robert H. Lawrence, Jr., Air Force test pilot and NASA's first black astronaut.