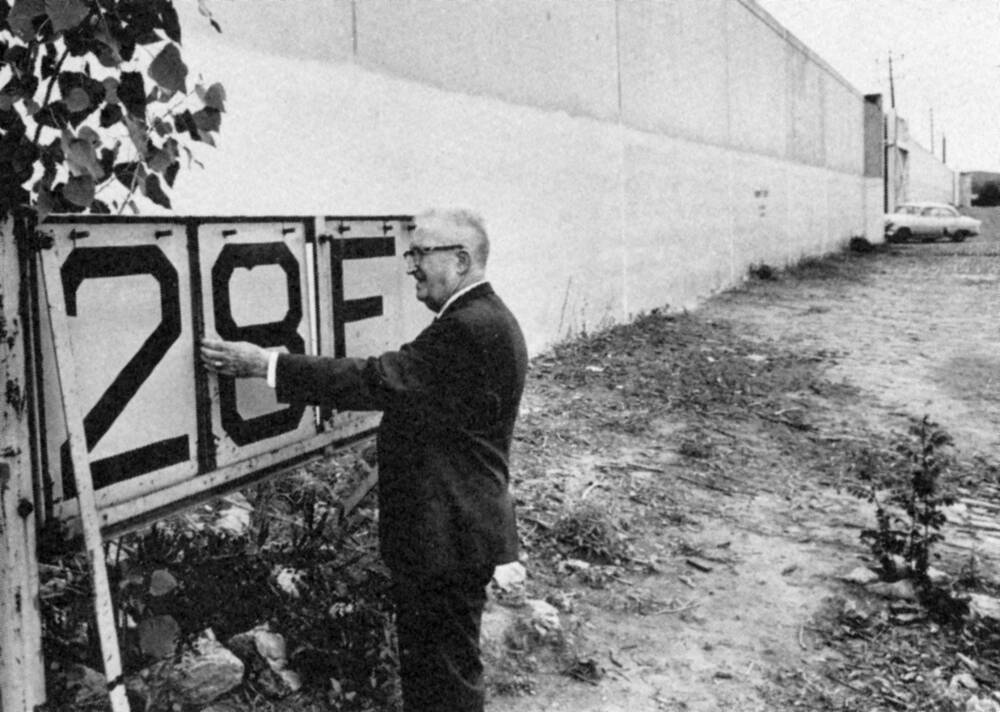 Lee L. Albert posts for the last time the Mississippi River stage outside the floodwall. The scene was in 1965. Mr. Albert died Sept. 26, 1972. (Southeast Missourian archive)

Lee L. Albert passed away Sept. 26, 1972, at the age of 91 years. For 40-plus years he was Cape Girardeau's official weather and river observer.

Along with recording the daily weather and river conditions at Cape Girardeau, he also preserved this city's history. He completed a hand-written book of his reminiscences just two weeks before he died. It would take almost another decade for his work to make it into print.

Lee L. Albert, who for more than 50 years has served as port warden and weather observer for Cape Girardeau, will begin Saturday a once-a-week feature for The Missourian entitled, "Do You Remember?"

Taking from his vast store of knowledge of the city accumulated in a lifetime residency, Mr. Albert will describe places and objects of other years that once were widely known.

Time has taken its toll on many of these, and they will not be remembered by those of younger generations, but to all they will bring a memory and a glimpse of Cape Girardeau as it once was.

We believe Missourian readers will take delight in these unique recollections of an esteemed senior citizen.

Do you remember the Frank Cans Ice Cream Shop? Mr. Albert tells about it Saturday. 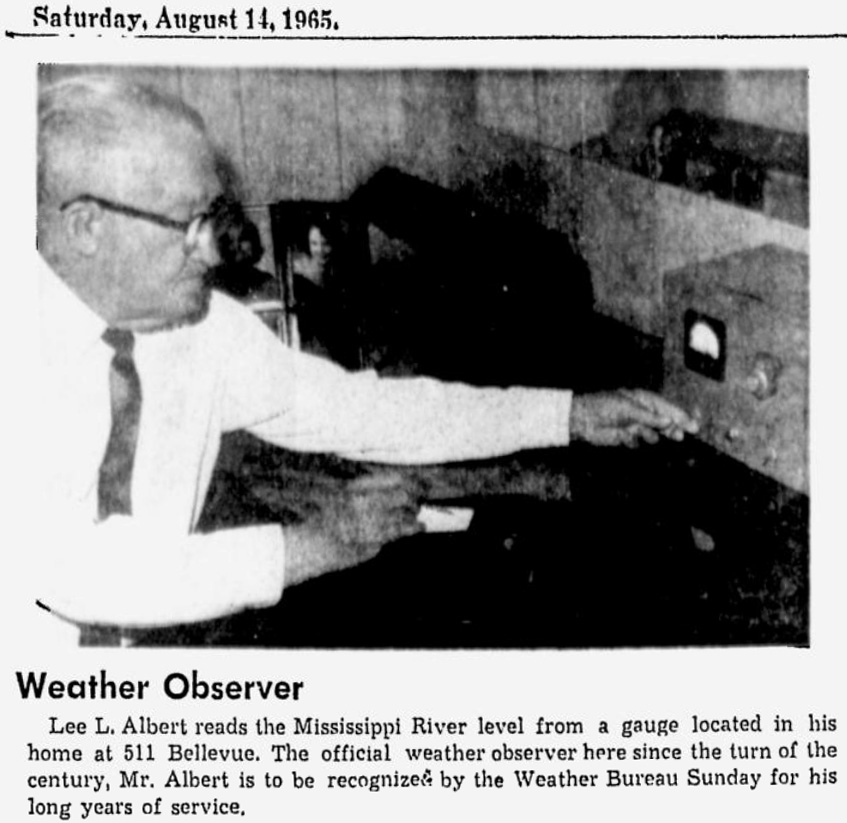 ALBERT TO GET WEATHER BUREAU AWARD

In the citation, signed by Bureau Chief Robert M. White, Mr. Albert was honored "For having faithfully served as cooperative weather observer at Cape Girardeau for over 32 years without a break in record."

The Albert family has been recording Mississippi River stages since the early 1900s when Lee's brother, Walter Albert, first took the position. After his death, the job was passed on to another brother, Irvin Albert, who transferred it to Lee Albert, who has held the post up to the present.

He explained that all of the talk about a "spring rise" and the floods caused by "melting snows" is more tradition than fact. He illustrated his point by saying, "If you have a trough and a bucket of water, and you pour that water into the trough gradually, it'll all run off with no trouble; if you take the same bucket of water and that same trough, and this time just dump the water into it, then you'll have a flood. That's the way it happens on the river: when there's a lot of rain in a short time, you're going to have high water."

The veteran weatherman hesitates to make predictions about the Mississippi because "if someone in Illinois throws a washtub of water into the river, that's going to throw your guess off."

As soon as a visitor enters his home, Mr. Albert shows him with pride the instrument with which he "reads" the river's level. Placed in his apartment several years ago, the instrument is about the size of an old-fashioned — pre-transistor days — radio. By fiddling with the dials he gets an accurate reading of the water level — down to a tenth of a foot.

He explained that a float in a well-shaped structure on the river fluctuates with the river's height, sending an electronic signal to the device in his home.

This, he said, simplifies matters greatly. Before the electronic device was installed, he had to go down to the river each day, climb 10 or 12 steps, push open a heavy iron door (after thawing the lock in the winter months) and then take the reading.

As if this wasn't enough trouble, after a rapid rise in the river he would have to shovel out the accumulated silt before the scale could be read. In the winter, Mr. Albert continued, ice would have to be broken off the gauge with a pick. Despite all of these handicaps, the weather observer never has missed a day reading the gauge.

Mr. Albert said his most exciting moments came during the spring floods of 1943, when Cape Girardeau almost lost its power plant to the river. He explained that several levees in Illinois were dynamited to relieve the intense pressure building up, and the river rose alarmingly. He was the coordinator between the main office in Cairo, Illinois, and has the job of keeping Girardeans informed of sudden changes in the floodwaters.

Partly because of his advance warning, enough men and sandbags were on hand to combat the rapid increase. During the three-day crisis, he said, his phone was ringing constantly with people calling for the latest predictions.

"While not all my moments have been happy," he added, "none have been regretful." Widely known as a river observer, Mr. Albert said it is not unusual for him to be called at any hour of the night by people saying, "Me and thish here buddy o' mine have thish bet about the flood of 1888. Can you help us?"

Mr. Albert also has the reputation of a local historian and his remembrances are featured in The Missourian every Saturday.

In summation he said, "I've had lots of pleasure over the years watching the river and its changes."

A family tradition ends today and with it ends more than 80 years of downtown weather and river observances in Cape Girardeau.

Lee L. Albert, 511 Bellevue, reported his river and rain readings to The Southeast Missourian this morning for the 12,520th time (and that doesn't include almost 2,000 Sundays for which he reported to the U.S. Weather Bureau in Cairo, Illinois), over the past 40 years, but left a saddened news room when he revealed it was his last day on the job as official weather observer.

"It's with regret that I retired," said Mr. Albert. "I've been doing it regularly since 1928, and have enjoyed the work and the people connected with it."

The Albert family has been recording Mississippi River stages since the early 1880s when Mr. Albert's brother, Walter Albert, first assumed the position. After his death, the job was passed on to another brother, Irvin Albert, who transferred it to the present Mr. Albert.

Haydin A. Fox, meteorologist in charge of the Weather Bureau at Cairo said today that a replacement would not be sought.

"We'll use the rain report from the Federal Aviation Agency's Flight Service Station at Cape Girardeau Municipal Airport," said Mr. Fox. "And we have an automatic 'telemark' river gauge to get that information."

Mr. Fox explained in detail how the "telemark" gauge would work.

"We dial an unlisted telephone number, which hooks into the automatic equipment," he says. "The equipment gives off a series of four beep signals, which gives us an accurate reading."

"We really hate to see Mr. Albert go," continued Mr. Fox. "It's just not going to be the same. We won't be talking to him every morning... And, we'd a lot rather talk to him than listen to a bunch of beeping sounds."

Mr. Albert's pleasant voice will be missed by this writer, in more ways than just receiving weather news. During the baseball season, Mr. Albert, an avid St. Louis Cardinal fan, always remarked on the game the night before, having sat up late to listen to broadcaster Harry Carey's play-by-play report.

Mr. Albert first became interested in weather observing at the turn of the century when his brother, who was then observer, became ill, and the job of reading the reports fell to Lee. And, in 1929, it became a full-time job.

Twice in the past three years, Mr. Albert has been the recipient of awards for his work. The first was in 1965, when he received the Weather Bureau's Jean Campanius Holm Award for "having faithfully observed as cooperative weather observer at Cape Girardeau for over 32 years without a break in record."

As late as 1967, he was presented a "length of service" award from the U.S. Weather Service.

Mr. Albert's wife, Susie, has been a faithful helper in giving the weather report. Many times, it was her cheery voice that reported the day's findings to The Missourian.

The final years on the job were easier ones for Mr. Albert, with his modern gauge, located in his home, which allowed him to read the river level, down to one-tenth of a foot.

The gauge worked much the same as the "telemark" gauge. A float in a well-shaped structure on the river which fluctuates with the river's height, sent signals to the device in the Albert home.

In earlier years, Mr. Albert had to make a trip to the river each day, climb 10 to 12 steps, push open a heavy iron door (after thawing the lock in the winter months) and then take the reading.

And when a rapid rise occurred, he would have to shovel out accumulated silt before reading the scale. During the winter months, ice would have to be broken off the gauge with a pick.

Despite these handicaps, the weather observer never missed a day reading the gauge.

Mr. Albert was born April 9, 1881, in Cape Girardeau. His father, Sebastian B. Albert, was an immigrant from France and his mother was Rosa Miles Albert. Lee Albert once recalled the family lived in a rambling 12-room house at 1107 Broadway when he was a child.

He attended St. Vincent's Parochial School, St. Vincent's College and the Old Normal School, now Southeast Missouri State University. His first position was as a clerk at the newly organized First National Bank around 1900 when it was located on Main between Broadway and Themis. He then was a cashier at the Bank of Kelso before beginning his position with Farmers and Merchants Bank.

He also worked as a steamboat agent, in the general mercantile business, as a Cape Girardeau port warden, in the wholesale flour business, in trucking and as an agent for Saint Francis and Southeast hospitals.

In notes for his memoirs, he wrote, "I did have the opportunity to be a part of many of the early businesses which have developed into the backbone of Cape Girardeau's economy."

The memoirs referenced above were published in the summer of 1981. His daughter took the longhand manuscript to Jane Stacy, director of alumni services at Southeast, asking for the university's aid in publishing it. Stacy helped secure partial funding through a state grant and then turned the project over to Juan Crites, director of public services, for editing and design. 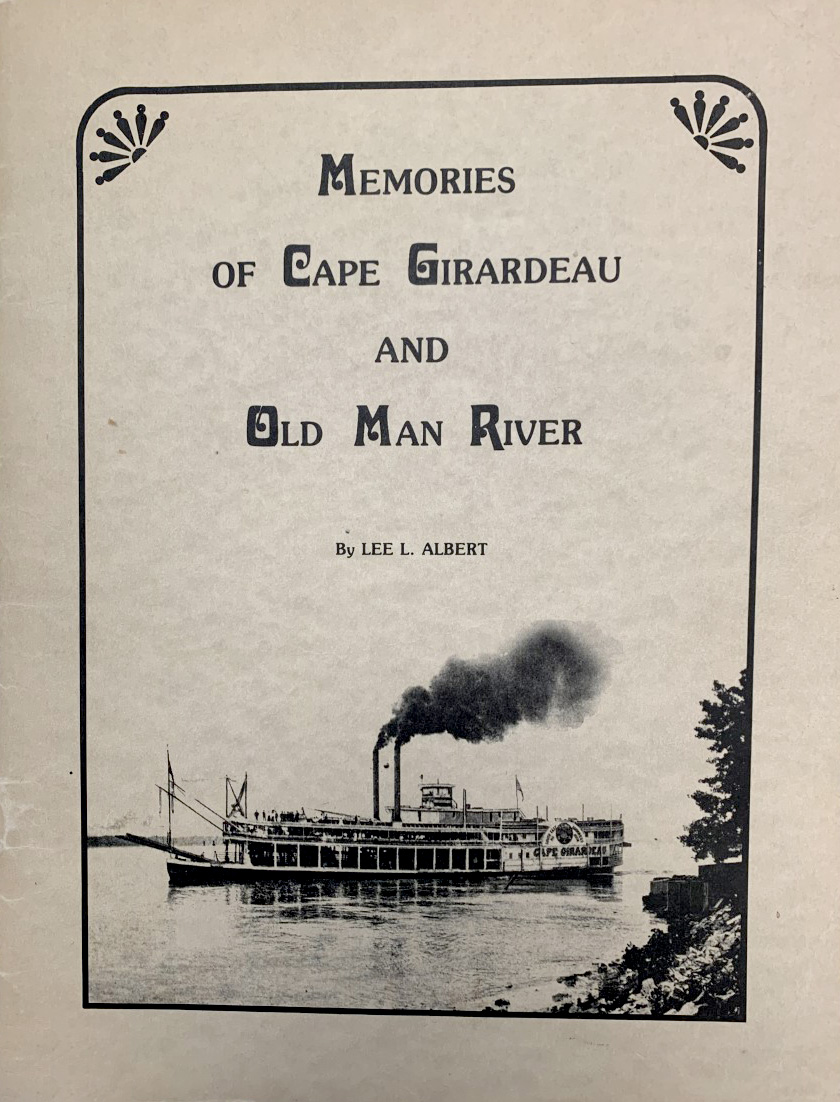 "Memories of Cape Girardeau and Old Man River" included stories and photos of a Cape Girardeau long gone. The book, too, is a thing of the past. I haven't found any organization currently selling it.