The exhibit explores the life of the 18th president, who was born in 1822, specifically his many connections with Missouri.

Cape Girardeau's ties to Grant are well known. It was here Grant took command of the Southeast Missouri Military District in August 1861. And before departing for Cairo, Illinois, Grant inspected Cape Girardeau's forts, then in various stages of construction.

Apparently, that connection to the Civil War general was still deeply felt at the time of his death in 1885, so much so that a memorial was ordered placed in the record book of the Court of Common Pleas. The ornate artwork still exists, and Cape Girardeau County Archive Center director Marybeth Niederkorn was gracious enough to provide a photograph of it. 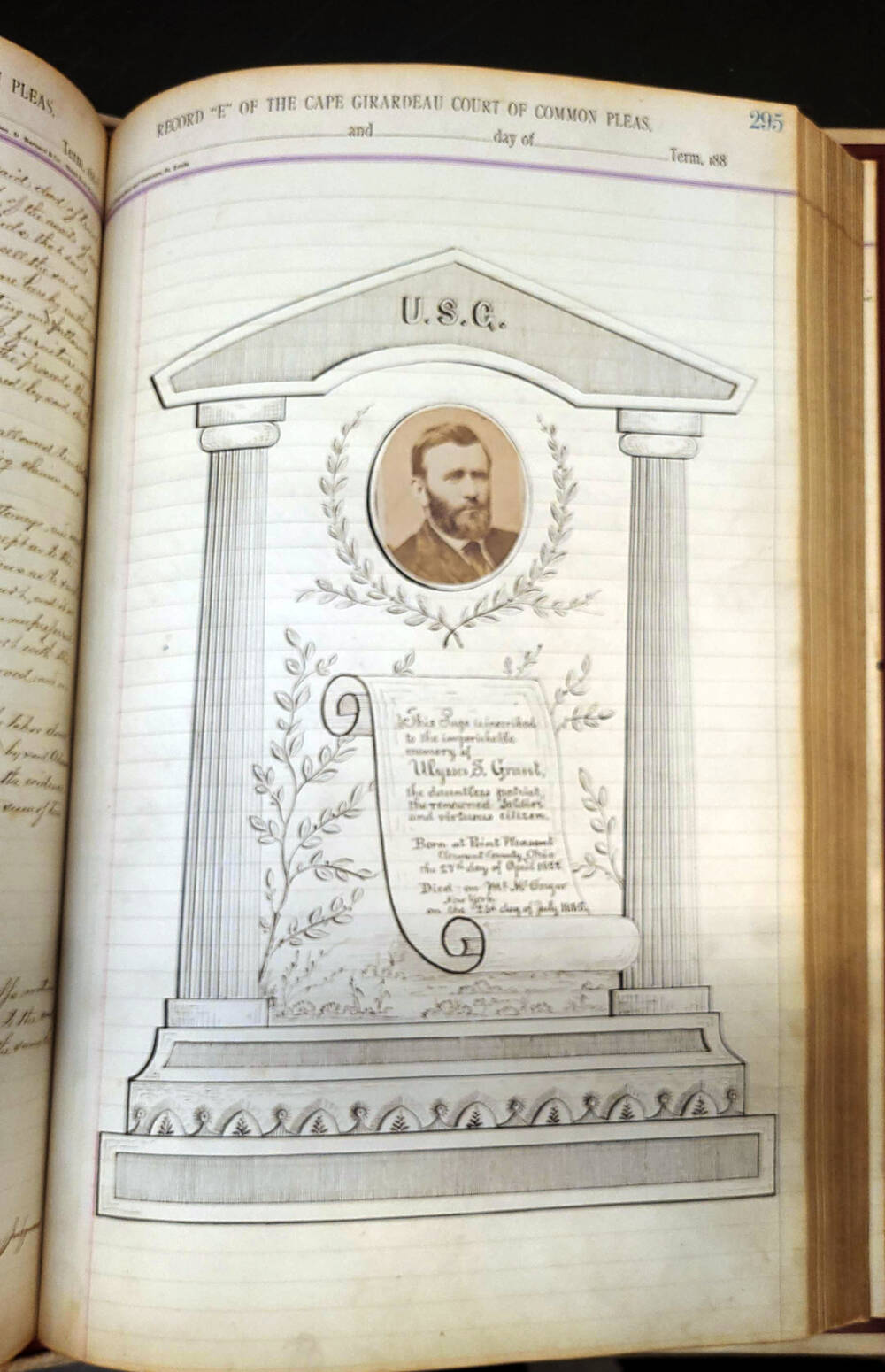 Here are the two stories published in the Southeast Missourian about the memorial, drawn by an unknown artist.

* * *
ARTIST WHO DREW GRANT'S PICTURE IN RECORD BOOK IS NOT KNOWN

Attaches of the Cape Girardeau Common Pleas Court are making an effort to determine the author of a pen and ink sketch of the late President U.S. Grant, made in a record book on order of the court on July 23, 1885, the day that Grant died.

The drawing was discovered by abstractors in searching the records, and F.A. Kage, clerk of the court. Kage, who was sheriff at the time the drawing was made, remembers when it was ordered, but said he does not recall who made it.

Robert L. Wilson was judge of the court and Edward H. Engelmann, clerk.

The drawing, which is exceptionally well done, has an inscription at the bottom which reads:

"This page is inscribed to the imperishable memory of U.S. Grant, the dauntless patriot, the renowned soldier and virtuous citizen.

He forgot to sign his name, and so, 90 years later, his identity is still a mystery.

An item in today's Out of the Past — 50 years ago — mentions a search for the name of an artist who composed a pen and ink drawing that encircled a photograph of President Ulysses S. Grant. The drawing was entered into the Common Pleas Court records here on July 23, 1885, the date of Grant's death, as a memorial to the former President and Civil War general who ordered construction of Civil War forts in Cape Girardeau.

Attaches of the court set out to find out who the artist was when abstractors, searching through court records, happened upon it. Their efforts, however, apparently went unrewarded as no mention of results of the search was made in subsequent issues of The Missourian.

The memorial drawing is still in existence today, neatly filed among the pages of court transactions during 1885. The preceding page among the bound records deals with general court proceedings of the day, and the revers of the drawing continues in the longhand writing style used by clerks to record court activities.

The drawing, a welcome break in a volume nearly void of any illustrations, is drawn directly on the lined court pages, and features an oval-shaped sketch (actually, a photograph - Sharon) of Grant surrounded by detailed greenery, all within portico columns. A scroll beneath the photograph denotes the page as a memorial and states:

"This page is inscribed to the imperishable memory of U.S. Grant, the dauntless patriot, the renowned soldier and virtuous citizen. Born at Point Pleasant, Clermont County, Ohio, the 27th day of April, 1822. Died on Mount Gregor, New York, on the 27th day of July, 1885."

Attaches interviewed various townspeople who may have had knowledge of the artist, but no one could recall his name. Clerk of the court in 1925, F.A. Kage, was sheriff when the court ordered the drawing to be entered, but he could not remember the name of the man or woman who performed the deed.