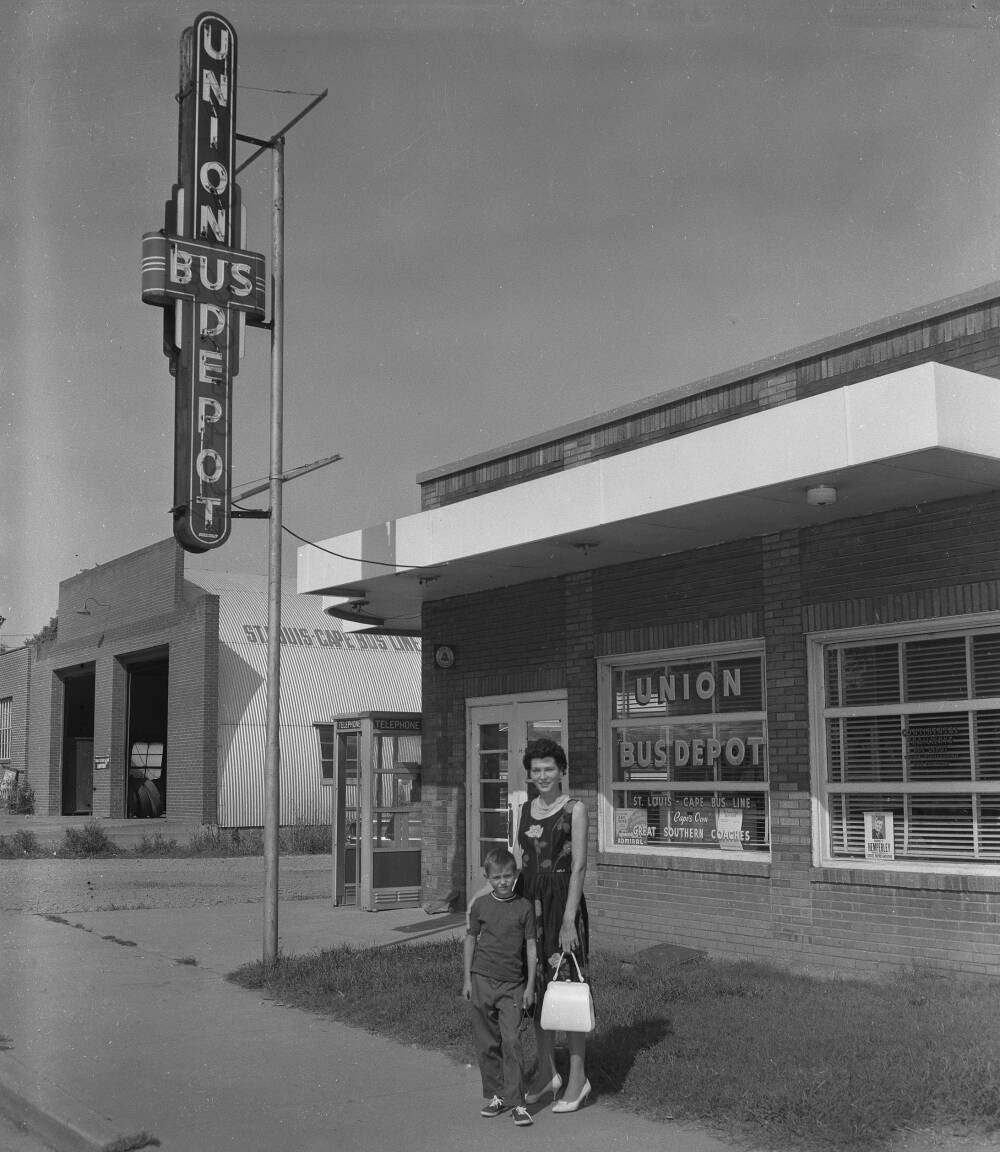 Mrs. Lois Travis and her son, Earl, 8, wait in front of the Union Bus Depot on Frederick Street in August 1960 to catch a bus for St. Louis. The depot served Cape Girardeau travelers from 1947 to 1990. (G.D. Fronabarger ~ Southeast Missourian archive)

The narrow streets of Cape Girardeau's downtown business district were apparently crowded with vehicles in the years immediately following World War II. So much so, that the city fathers sought ways to lessen traffic.

Among their ideas: Take interstate and intercity buses off Broadway, Main and Spanish streets by asking transportation companies to move their terminals off of Broadway and transfer most of the cross-town traffic to Independence Street. The city presented its plan to representatives of the bus companies -- St. Louis-Cape Bus Line, Great Southern Bus Line, Southeast Missouri Bus Lines, Southern Bus Lines and Dixie Greyhound Lines -- in March 1946.

The plan met some push-back from Judge James A. Finch, an attorney representing St. Louis-Cape Bus Line and Great Southern Bus Line, who said the city could designate the routes buses should travel in the city, but it couldn't say where terminals would be located. The other bus officials agreed to cooperate with the city, but stressed that no changes could be made at that time, citing continued war restrictions. And the city seemed to agree that this was a long-range plan.

And nothing was done...

Buses continued to use Broadway for terminals, although Southern Trailways did attempt to purchase land at the southwest corner of Themis and Middle streets in May 1946 as the site of a new depot. Unfortunately, residents of the neighborhood didn't like the idea and petitioned the City Council to refuse its permission to build there.

Finally, after months of inaction, the city decided it had waited long enough for bus lines to respond to their request to move off Broadway and in January 1947 fired the first salvo in its transportation war.

DEPOTS OF CAPE BUS LINES WILL HAVE TO MOVE

Evidently vexed with failure of major bus companies to remove their depots from the busy streets of the city, the City Council passed an ordinance in Monday’s session requiring them to locate their terminals along Independence Street and to use Independence for the major part of their travel in the city. The ordinance becomes effective in 10 days.

As to allowing more time than the 10 days for compliance with the new measure, the members indicated that there might possibly be a chance that this could be worked out. It will mean that all the bus lines doing an interstate or intercity business will have to move their depots.

The ordinance, for which all council members voted, in the three readings, directs that no bus line shall use a terminal except along Independence Street, westward from Spanish Street to the western limits. The north line of the area is fixed as a straight line 150 feet south of Themis Street and parallel to it, and the south line is set as 150 feet north of Merriwether Street and parallel to it. Merriwether is a block south of Independence and Themis is a block north of the dividing street.

The ordinance sets out that bus lines running machines as on Highways 74 and 61 shall use Independence Street, for incoming and outgoing buses, and that those coming over the traffic bridge shall use the most direct route from the bridge to terminals (on Independence Street).

The measure also sets out that the bus firms shall not use sidewalks or other public property for loading and discharge of passengers. This will mean that street and sidewalk loading will not be permitted.

The ordinance sets up a maximum fine of $100 for violation, when the measure is in effect, a $100 fine being possible for each day of violation.

Council members pointed out that a conference was held last year as to removal of bus depots from Broadway and other busy streets, but nothing has resulted up to the present from that action.

The Missourian reported two weeks later that the City Council heard from only Elmer A. Strom, a local attorney for Greyhound Lines, following passage of the ordinance. Strom asked the city to delay its enforcement, saying Greyhound, with a terminal at Broadway and Ellis Street, had a lease on the building "with considerable time yet to run." He also pointed out that there were few available locations on Independence Street, the thoroughfare the city wished buses to use.

The article gave no indication that city officials were swayed by Strom. In fact Commissioner Frank Batchelor "declared that following a city-bus lines conference in 1946 no action at all was taken by the companies." Commissioner Phillip H. Steck agreed "that cooperation with the city has been poor," and "Mayor R.E. Beckman said ... bus companies (had) talked on an occasion or two of taking some action, but that nothing (had) been done to correct the traffic problem."

Things came to a head the next month.

Heralded by a statement that “This ought to show that we mean business once in a while,” (Emphasis added. - Sharon) the City Council without scant discussion, at its meeting Monday afternoon, ordered immediate enforcement of an ordinance passed early in January that provides bus companies must locate their terminals along Independence Street for the major portion of their travel in the city.

The motion that enforcement begin was made by Commissioner Frank Batchelor, who observed, “They haven’t paid any more attention to us than if we were Charlie McCarthy here without Edgar Bergen.”(Emphasis added. - Sharon)

The ordinance, Mayor R.E. Beckman said, applies to all of the inter-city bus lines operating in the city. None is located within the prescribed limits set by the council, and most of them are on Broadway….

The City Council's order did exactly what was intended: It stirred action.

Fearful the city would force bus terminals away from downtown Cape Girardeau and out along Highway 61 (Kingshighway), the Retail Merchants Association passed a resolution requesting the council defer enforcement of the ordinance until "facilities were available." Further, they pledged to help the city and bus companies find a solution to the problem.

Merchants had a big stake in the conflict. Many enjoyed increased foot traffic when buses unloaded passengers on Broadway. They feared that out-of-town shoppers would choose to spend their paychecks elsewhere, if buses discharged passengers on Kingshighway rather than bring them all the way downtown.

The same day downtown merchants entered the fray, St. Louis-Cape Bus Line and Great Southern Coaches surrendered to the city's threats, announcing plans for a union depot on Frederick Street, in the block between Themis and Independence.

NEW BUILDING BOUGHT BY ST. LOUIS-CAPE BUS LINE FOR USE AS DEPOT

The new V.W. Dyer building on North Frederick Street, designed as a bus depot, was in process of being sold today by Mr. Dyer to the St. Louis-Cape Bus Line and the Great Southern Coaches for use as bus depots and terminals. The brick, one-story structure is located on the east side of Frederick Street and a half block north of Independence Street. This makes it eligible for use under the new city ordinance meant to line the bus depots along Independence or within half a block of it.

The property includes an entire frontage on Frederick of 140 feet, with the building occupying approximately 40 feet, at the south portion of the frontage. The space north of the building has been roughed in as a parking space.

The structure, of brick construction, has spacious windows in the front and on the north side. A marque was constructed at the front and along the north side. The floor has not been put in, and workmen today are installing the plumbing. The ceiling remains to be completed. Dyer started the building last year and little work has been possible this winter.

Mr. Dyer said today the depot should be an excellent one, with its proximity to the downtown sectors and to Independence Street. It is five blocks from Main Street and 1 1/2 blocks from Broadway.

That union depot went into service in August 1947. 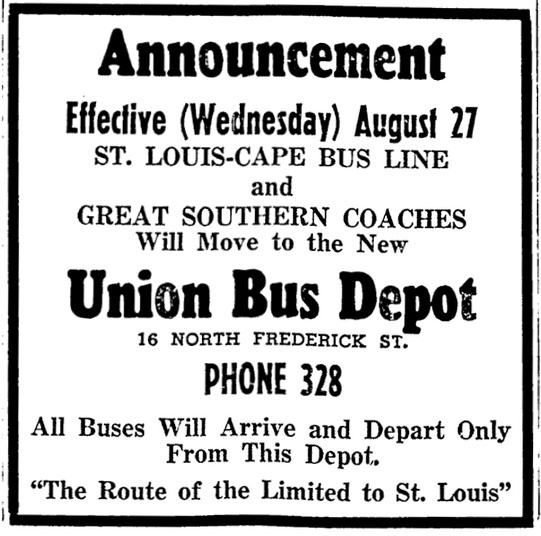 With that announcement that St. Louis-Cape Bus Line and the Great Southern Coaches would move off Broadway, the city softened its stance, delaying enforcement of the bus ordinance which was set to begin March 1, 1947. According to Mayor R.E. Beckman, the bus firms were finally “cooperating 100% with us and the matter will be ironed out to everybody’s satisfaction."

That cooperation included talks among the representatives of Southeast Missouri Bus Lines, Greyhound Lines, Southern Bus Lines, Inc., Carbondale-Harrisburg Bus Line, Scofield Bus Line and the Frisco Transportation Co. regarding the possibility of building a large terminal to serve those lines. Those talks led to the construction of a Union Bus Center on the east side of Spanish Street, between Independence and Merriwether streets, across from the Midwest Dairy Co. plant.

Construction of the terminal began May 6, 1947, and it opened July 21, 1947. With the near-record flooding that spring, it's a wonder the structure opened when it did. 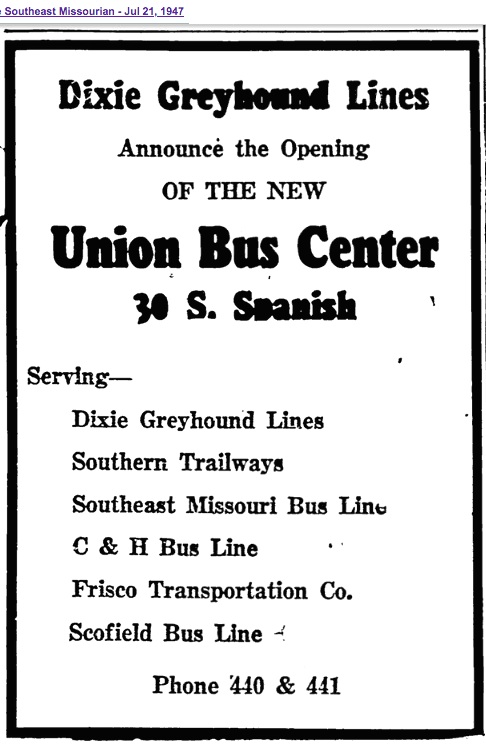 All buses load and unload off the street at the new terminal so as not to hamper traffic. Loading platforms are located on the west (front) and south sides of the structure. The lot also contains space for taxicab parking. The building has a 50-foot frontage and is 32 feet in width.

Greyhound moved its offices Sunday night from the building at 735 Broadway it had occupied since 1942 and on which it has a lease. The Broadway building has been sub-leased by Greyhound to C.L. Houser, who had the ticket office and restaurant, and who will now operate the Dixie Dairy Bar and restaurant in the location. The structure, owned by Anton Haas, has a Broadway frontage of 35 feet and is 100 feet long.

Here today for the opening of the terminal were J.W. Cable of Memphis, Tennessee, assistant to the president of Dixie Greyhound, and George Byers of Jackson, Tennessee, chief passenger agent for Southern Bus Lines. The latter line has not operated schedules since early June because of a strike, but negotiations looking to a settlement of the dispute are underway. The company has moved its offices from the building at 119 Themis St., from which Southeast Missouri Bus Lines and the Frisco also operated. Carbondale & Harrisburg and Scofield operated from the Broadway terminal.

Opening of the terminal and removal of the lines from the Broadway terminal leaves but two lines still operating from a Broadway terminal. They are St. Louis-Cape Bus Lines and Great Southern Bus Lines, which are served out of a building at 725 Broadway. The former line has purchased a new terminal on Frederick Street, but the structure has not been completed. 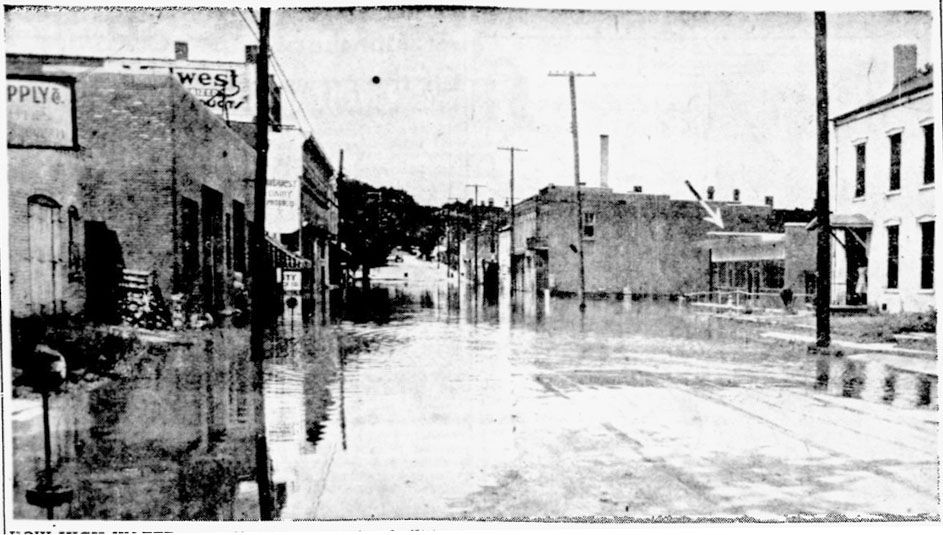 How high water may affect transportation facilities in and out of town is shown in these pictures of the area on South Spanish Street where the new bus terminal, opening this week, is located -- further proof that flood protection is needed in the riverfront area. Looking to the north, the picture was taken during the recent high water, shows the Spanish and Independence Street intersection with the arrow indicating the new bus station. (Below), the bus station surrounded by water, but still has a few inches of freeboard. (Southeast Missourian archive) 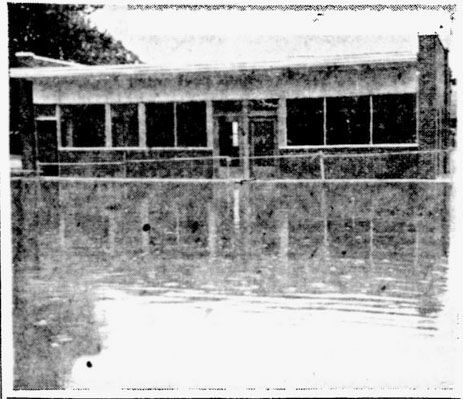 More history of buses and bus terminals are available here: