Who can resist a story about triplet calves born on a farm near Oak Ridge? Their cuteness is almost overwhelming.

I certainly couldn't skip past this article without reading it. And the tale is even more enticing because I'm privileged to be friends with several relatives of the subject of the article: Willard Goodson. 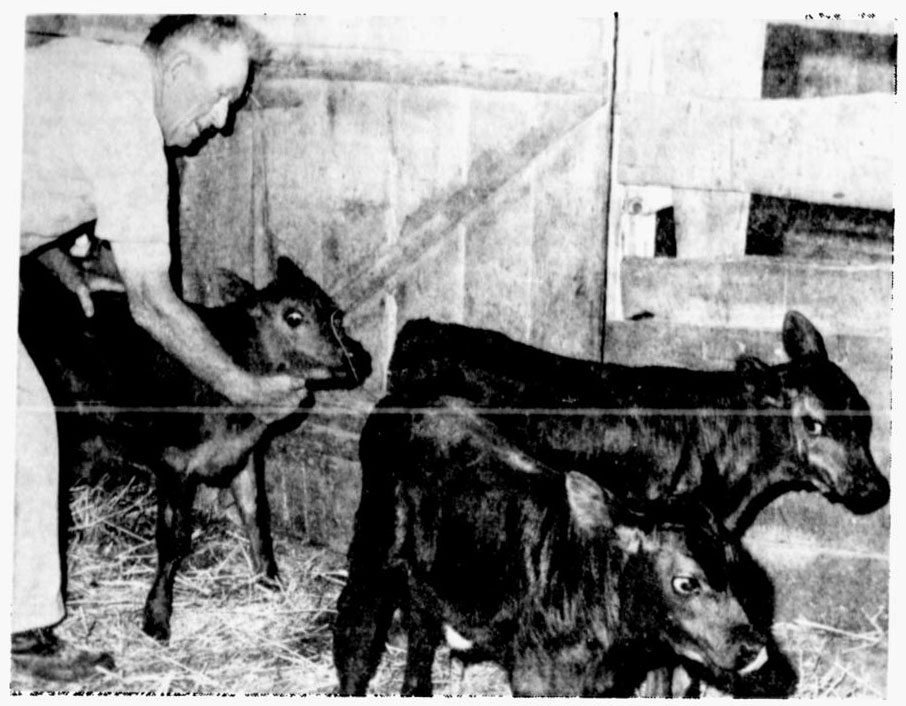 Unafraid, but equally uncooperative, the triplet calves born to a Holstein cow owned by Willard Goodson of Oak Ridge refuse to line up for their baby picture. It was the first set of triplets Mr. Goodson has seen in 64 years of farm life. The calves' daddy was an Angus bull. (Southeast Missourian archive)

For a cow to have healthy triplets, the odds are so slim that for practical purposes it could be said that it is impossible.

But impossible or not, a Holstein cow owned by Willard Goodson, who farms east of Oak Ridge, has produced a healthy set of triplets.

Mr. Goodson said the first of the three was born the evening of June 29. "She had one and I figured that was it. But Friday morning, on the way to a hay field, I saw She had two more. I couldn't believe it."

The Holstein, which had been bred to an Angus bull, apparently had no trouble in calving, Goodson said.

Mr. Goodson, 64, said this is the first set of healthy triplets he has seen in a lifetime of farming. Multiple births occur occasionally, but seldom is more than one calf normal.

Clare Engle, extension livestock specialist for the three-county area, commented that the occurrence of twins is less than 1%, and he'd hate to try to calculate the odds against a cow having triplets.

"Multiple births are more common in dairy animals than in beef breeds," Mr. Engle state, "but even twins is a rarity."

Mr. Engle said the only other set of triplets he could think of was a set born of a cow in Oklahoma in the early 1960s.

"I think that was a Holstein cow too," he said.

Today's rarity may be common in the future, however. Mr. Engle said a considerable amount of research is being conducted over the country to find ways to induce cows to have multiple births.

The goal is to develop a means by which a cow can be induced to have twins regularly.

"It is not difficult with hormones to induce a cow to have a multiple pregnancy," Mr. Engle said. "What is difficult is finding a way to limit the pregnancy to two calves and insure that both will be normal and healthy.

He said it is not yet possible to do this consistently, even under laboratory conditions, but predicted that in the future cattle raisers will be able to double the calf crop routinely.

A brief search online shows that the chances of a cow having triplets is 1 in 100,000, although none of the information I read offered the source for those odds.