Last concrete of I-55 between Cape Girardeau and St. Louis poured

After years of planning and work, the last bit on concrete of Interstate 55 between Cape Girardeau and St. Louis was poured 50 years ago. On July 12, 1972, there was no fanfare, when the last concrete fell into place, completing an unbroken ribbon of hard pavement from Cape Girardeau to St. Louis.

Oh, the interstate wasn't complete. A number of items were still on the to-do list, such as blacktopping of shoulders, installation of signs and guardrails, and seeding and fertilizing the median. But daylight could be seen at the end of a long, long tunnel.

Here's how the "closing of the gap" was reported in the Southeast Missourian on Thursday, July 13, 1972:

The concrete strip of two-lane highway connecting St. Louis with Cape Girardeau was completed Wednesday afternoon, leaving only small bits of paving at rest stops and ramps to be done before the late August opening of the last portion of Interstate 55 between the two cities. Here the massive pavement-laying operation is 25 feet from completion just north of the Route FF overpass east of Fruitland. (Southeast Missourian archive)

A few minutes after 4 Wednesday afternoon, wet concrete spilled over from the front of a paving machine onto already-dried concrete and the twin ribbons of Interstate 55 concrete became whole from here to St. Louis.

The linkup came without fanfare or celebration and, except for a few extra people watching the work, was a routine operation.

Among the bystanders there was talk that there should have been a golden spike or a small time capsule to bury in the last bit of wet cement -- something -- but there was nothing special about the event.

One of the cement finishers was heard to remark that there should have been a barrel of beer on hand for the occasion of finishing the paving of I-55, but ice water was all there was.

One of those on hand to watch the last bit of concrete poured was District 10 Highway Engineer William H. Shaw of Sikeston. To him the last bit of paving was more than routine, but still not cause for celebration.

"There's a lot to be done yet," he commented. Several ramps have to be paved yet and the rest area north of Oak Ridge has to be completed.

The shoulders have to be constructed and blacktopped. Signs have to be erected, guardrails installed and the median and sides seeded and fertilized.

Hopefully, this can all be completed in the next five or six weeks.

"We may be able to open the highway by the end of August," Mr. Shaw said. "It depends on the weather. A week of rain would make the job run a week later."

But at least the mainline paving is completed now. Watching the operation brought back memories for another observer, Garland D. Fronabarger of Cape Girardeau, who helped build old Highway 61 from Fredericktown to Cape Girardeau 50 years ago.

Today, the paving is laid by a crawler-type machine which spans two lanes, laying the concrete as it creeps forward. Only at the linkup did the giant machine leave the work primarily to men with shovels, tampers and finishing tools.

The machine can crank out more than a mile of double lane highway per day.

"Back then we were lucky to get 200 to 300 feet per day," Mr. Fronabarger recalled. "I drove a solid wheeled truck and we did good to haul two loads of gravel out of Whitewater Creek to the paving site each day."

Motorists of today might dispute Mr. Fronabarger's statement, but he considers the building of Highway 61 some 50 years ago as more important than I-55 today.

"It was the first pave road in Southeast Missouri," Mr. Fronabarger said.

While I-55 can't win the distinction of getting Missouri out of the mud, it is nevertheless a milestone in transportation for Southeast Missouri.

And while the construction workers on this project did not celebrate the final patch of paving, motorists will certainly be gearing up to celebrate when the highway does open in a few more weeks. 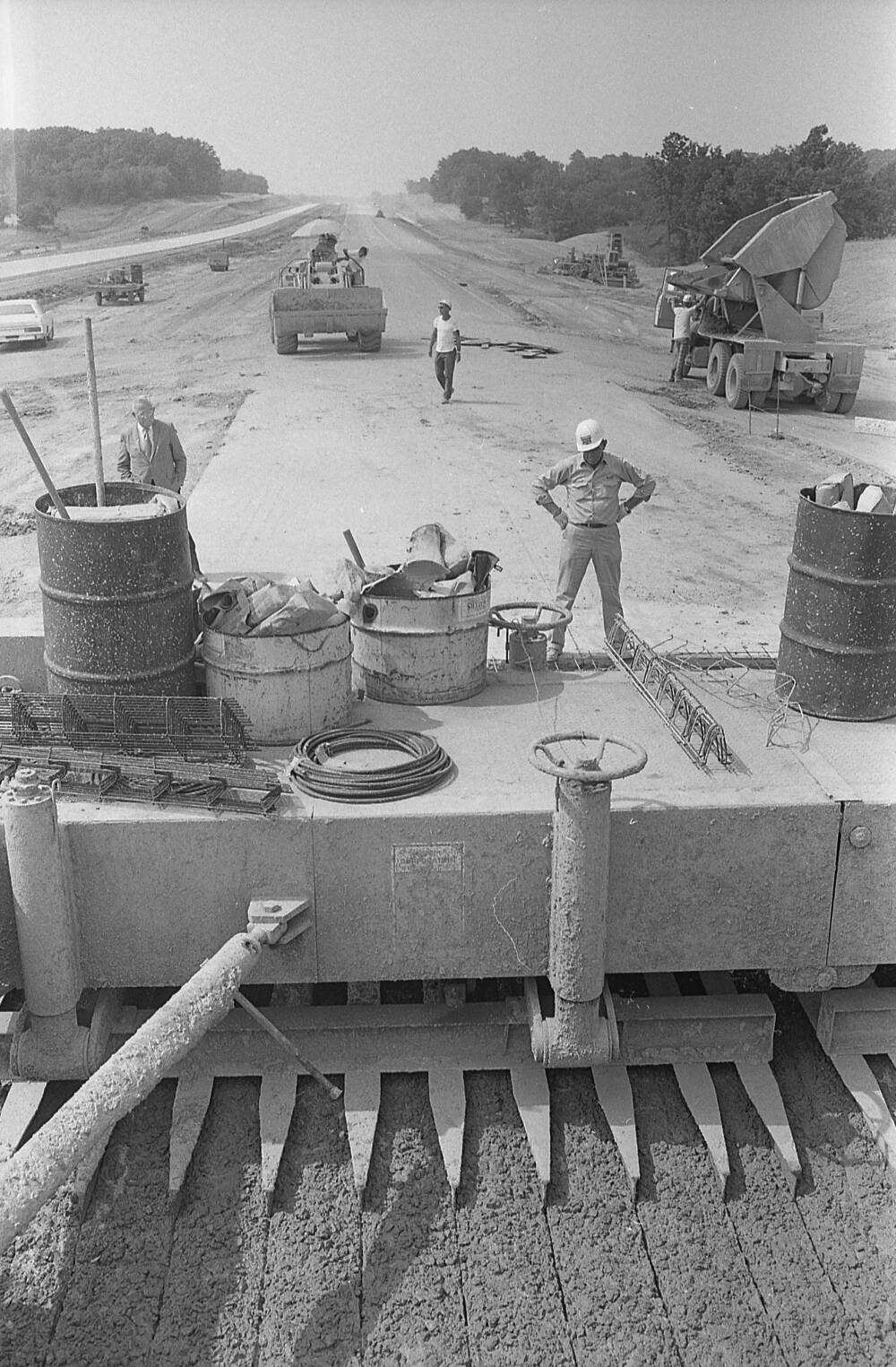 This is a close-up of the last pour of concrete (on I-55). (Southeast Missourian archive)

Thursday's final pour of main-line pavement culminated 11 years and 3 months of I-55 construction between Scott City and St. Louis.

The contract for the first section of I-55 pavement was awarded on April 21, 1961, and actual construction began a short time thereafter.

Dedication of the first section was held on Sept. 8, 1963, with Gov. John M. Dalton, who died last week, as the speaker. He cited the safety factor of interstate highway, explaining they are more than twice as safe as the old routes they replace.

Subsequent to this first contract, numerous others were awarded. When I-55 is opened in the stretch from Fruitland to Brewer in late August, only one main portion will remain between St. Louis and Memphis, Tennessee. This is a 12.73-mile section from South of Hayti to near Cooter.

Construction of this final section is expected to be completed in the fall of 1973 under a $14 million contract held by R.B. Potashnick Construction Co. of Cape Girardeau. Twenty-five percent of the work on bridges and structures along this section has been completed. Penzel Construction Co. of Jackson is contractor for this work.

Here are a few other photographs taken by an unknown Missourian photographer the day of the last concrete pour on I-55 between Cape Girardeau and St. Louis. 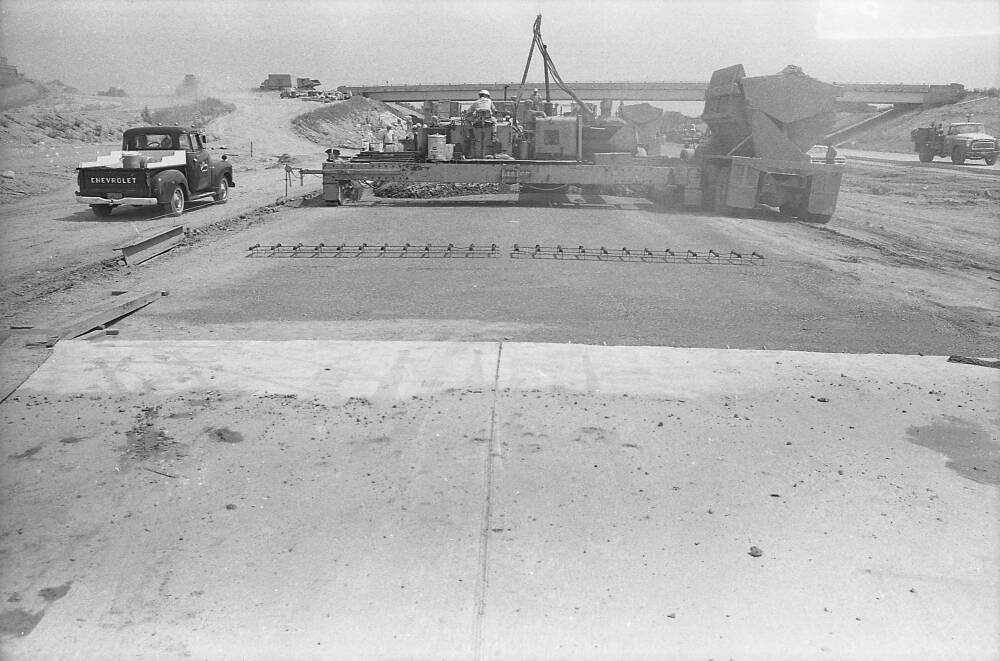 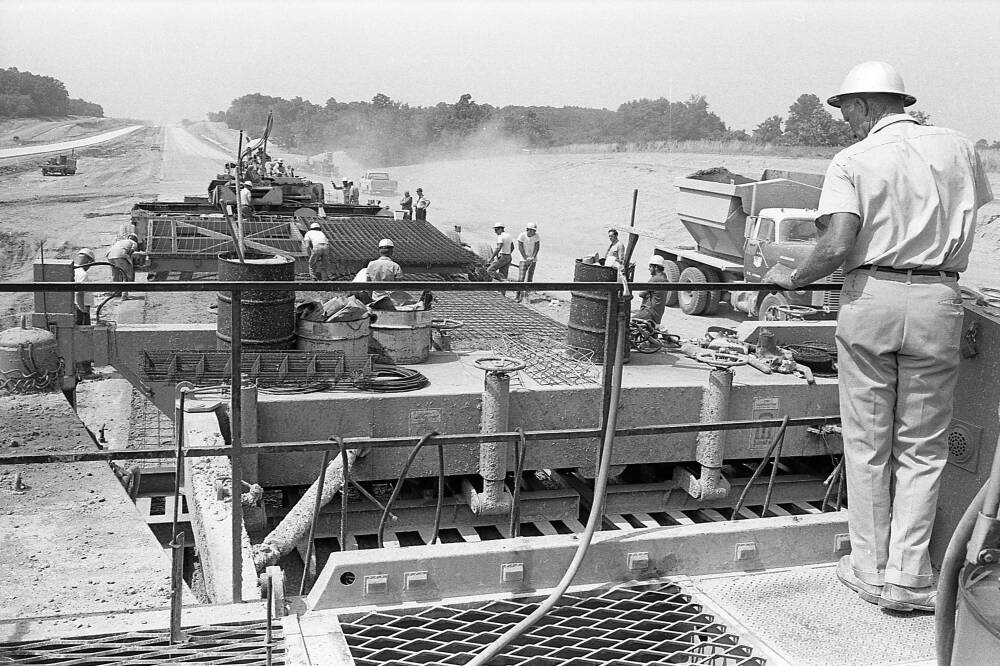 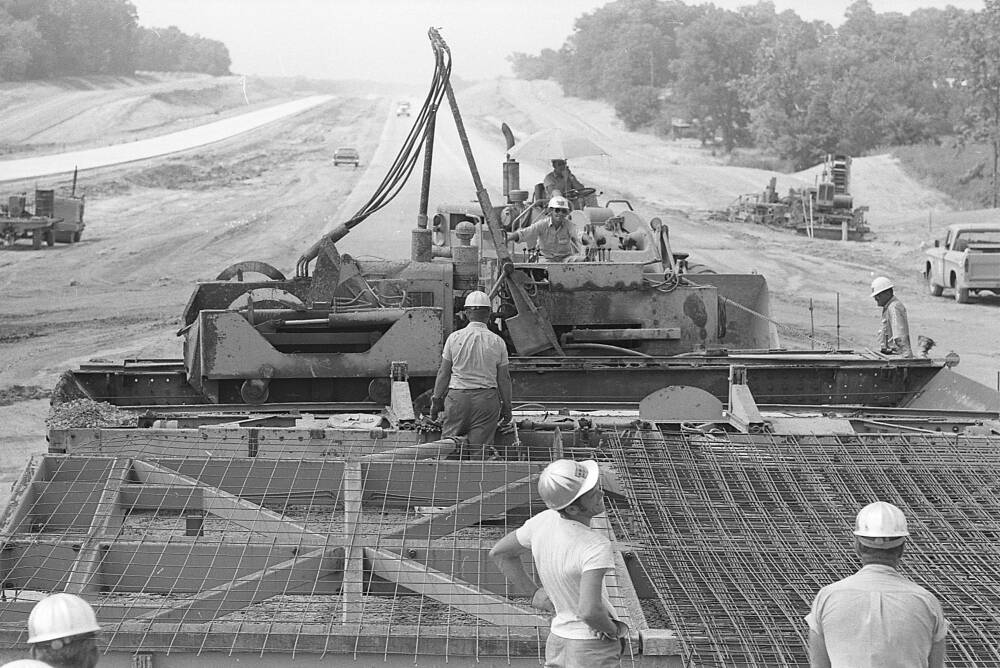 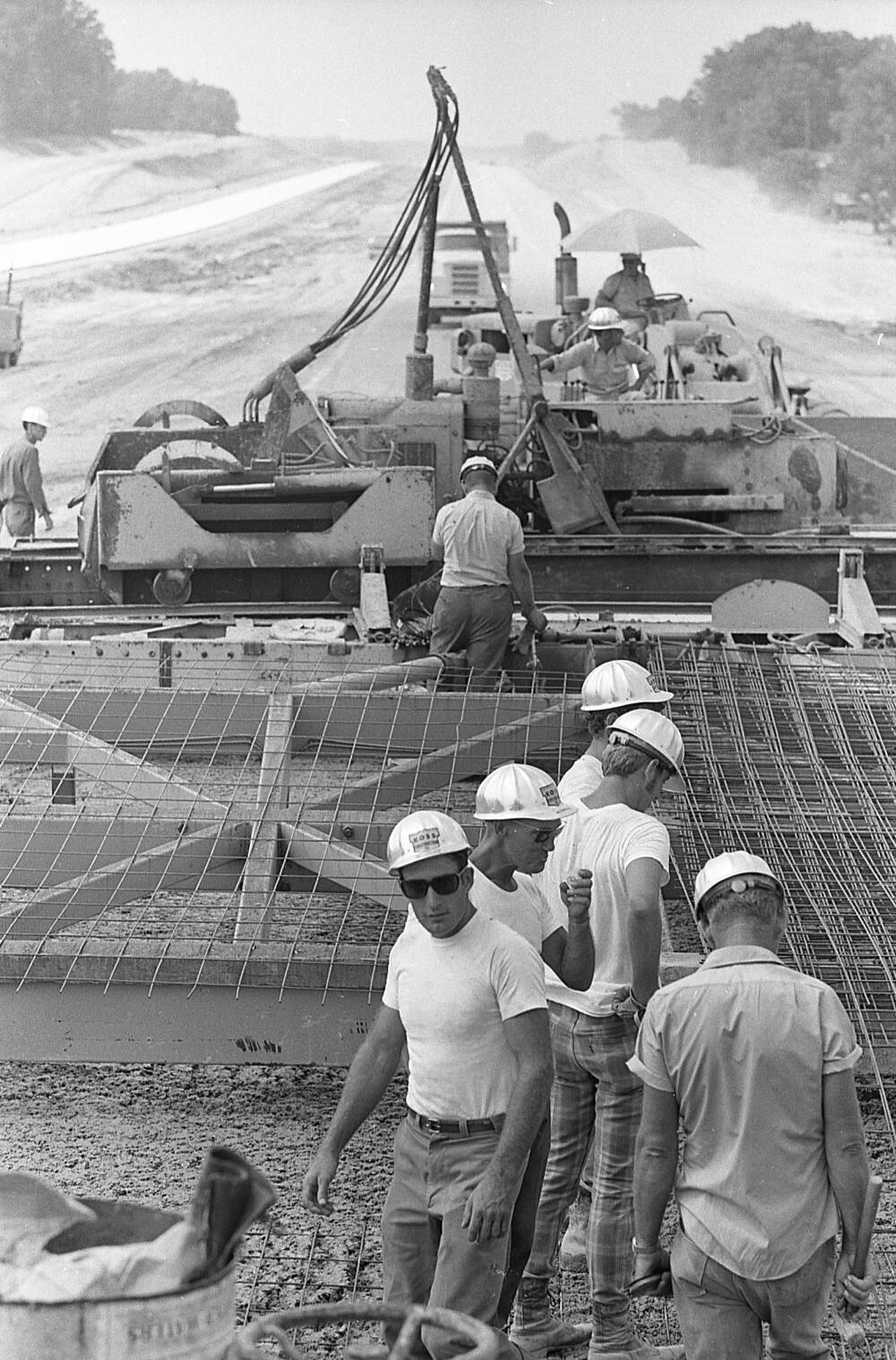 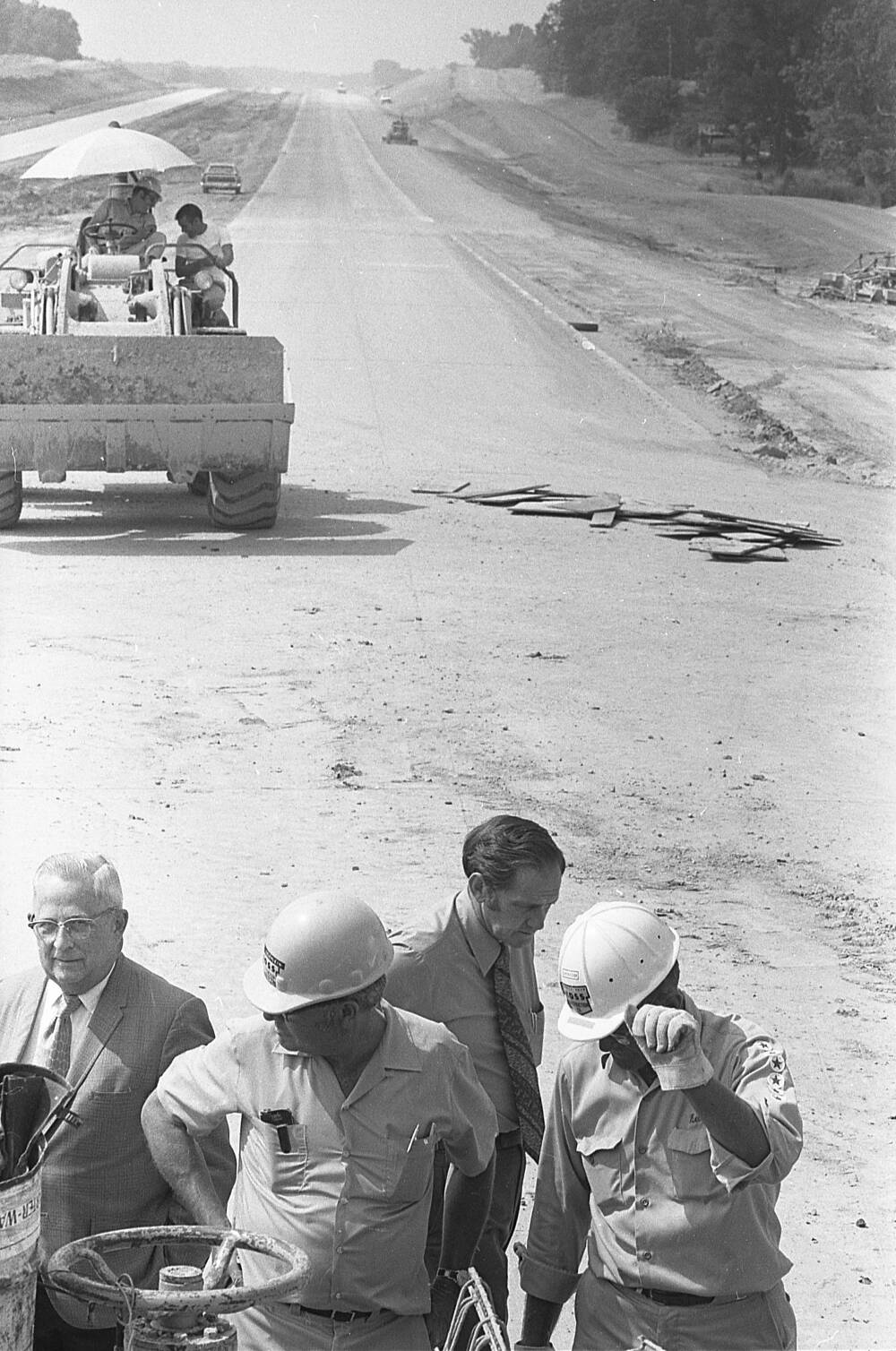 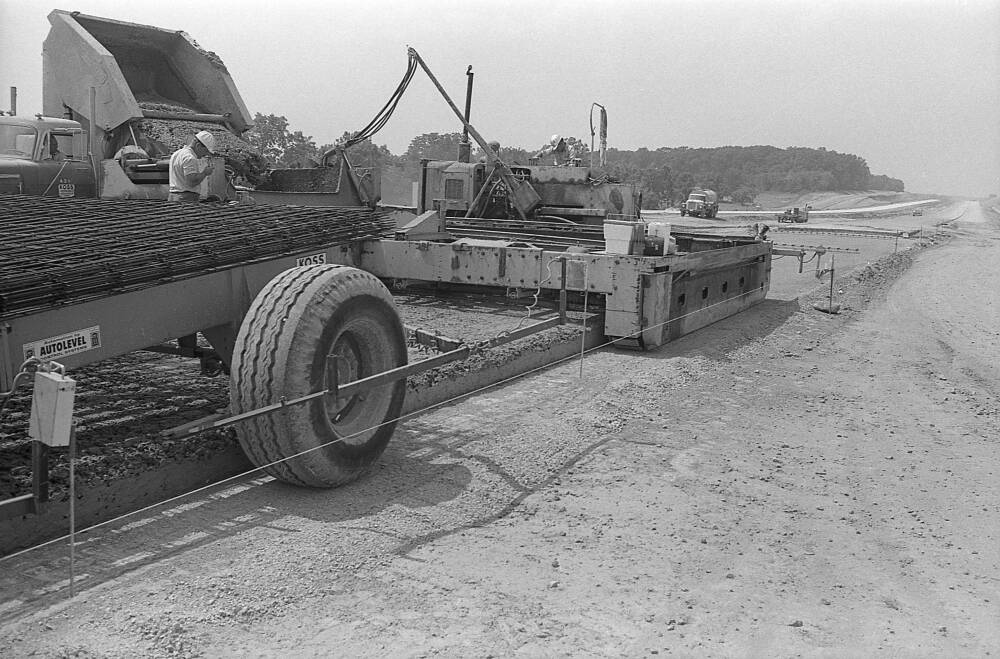 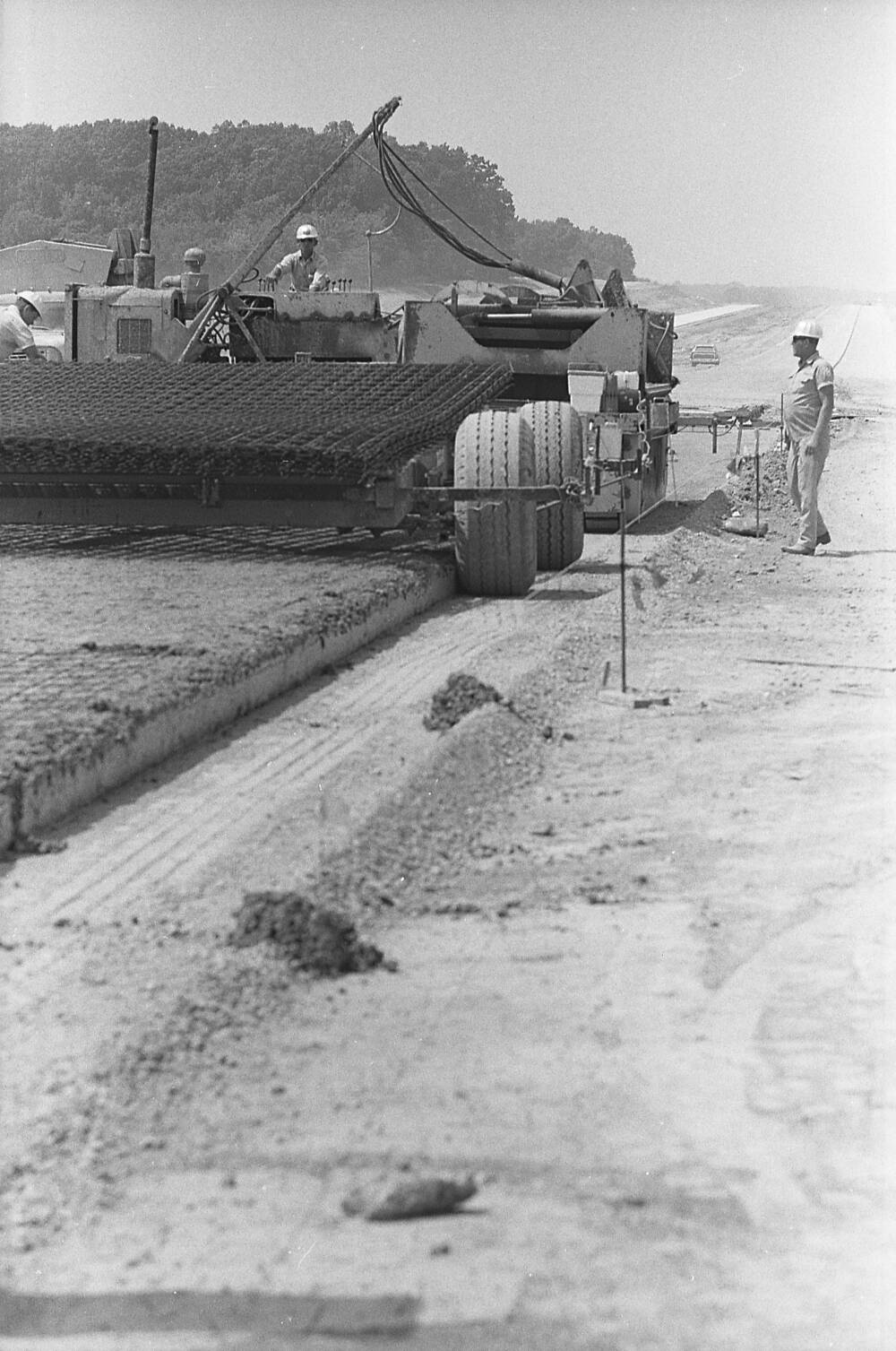 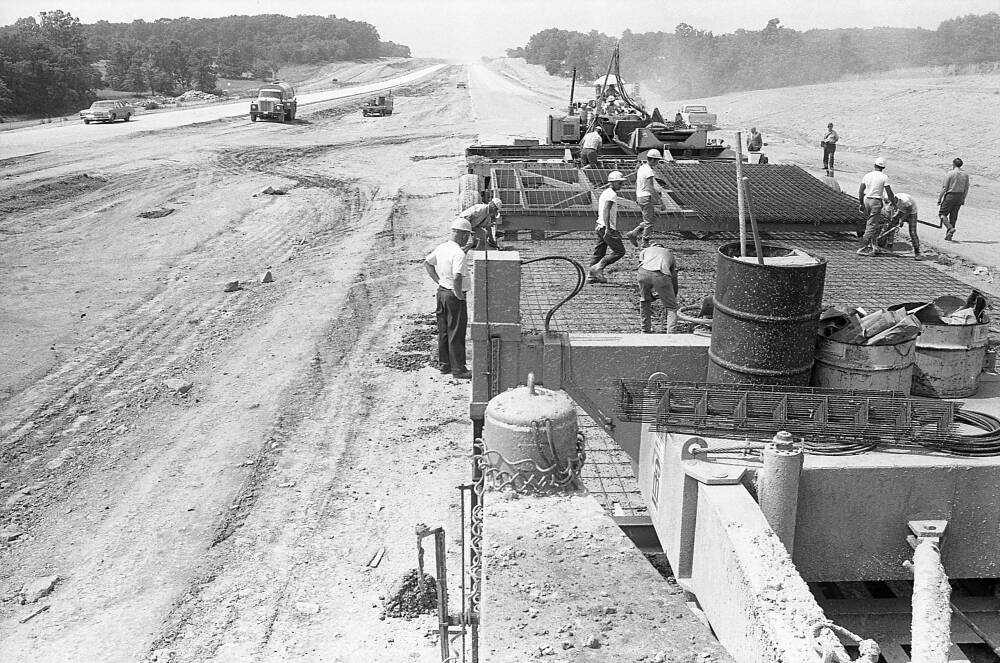 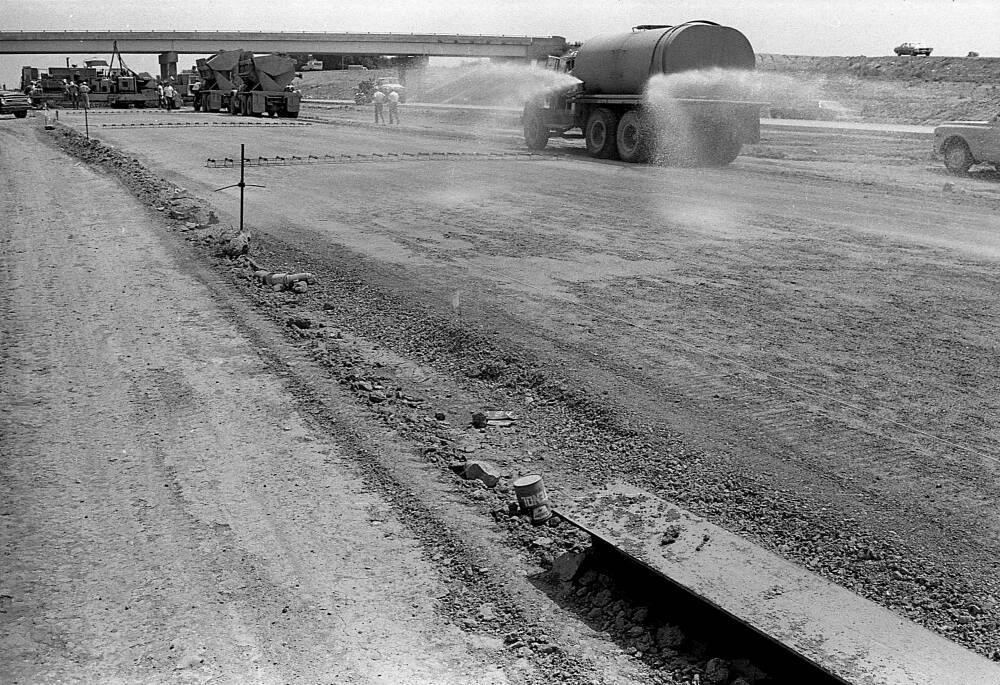