The structure that houses Shivelbine's Music store at 535 Broadway has a long history that includes a saloon, hotel, sewing machine shop, furniture store, hardware store and, finally, a music store.

The separate commercial spaces that make up Shivelbine's took on their current dimensions 75 years ago. In December 1945 the owners of Excelsior Furniture & Music Co., 533 Broadway, purchased the building at the southeast corner of Broadway and Frederick Street, with plans to join the two spaces. Architect for the renovation was Bernard Bloom of St. Louis, and work began in early 1946. The remodel was completed in May 1947. 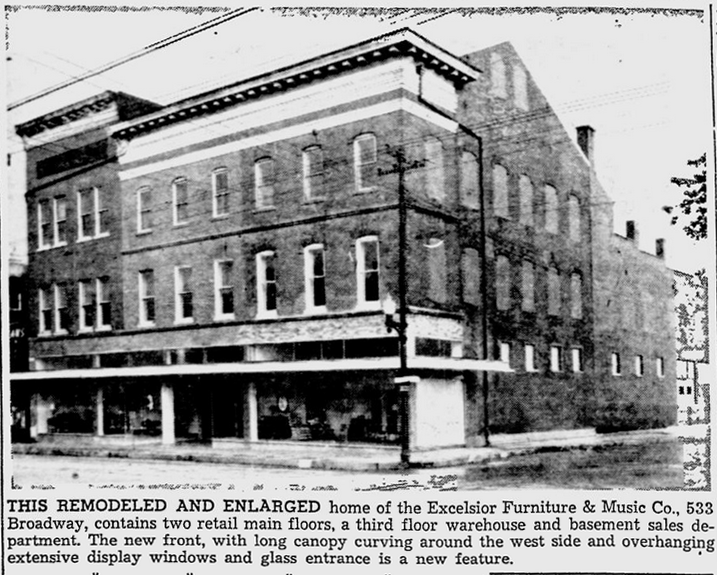 With work virtually completed, the extensively remodeled and elaborately furnished and stocked building of the Excelsior Furniture & Music Co., 533 Broadway, was formally re-opened today, marking completion of a project which began early in 1946. The greatly expanded unit, covering three main floors and a basement, adds a new retail significance to the community with its seven carefully arranged departments, serving a modern merchandising trend in addition to the general main floor area. Formal opening, beginning today, will run through Saturday.

Two main floors on street level and above and the basement are retail spaces, the third floor being utilized for warehouse space. Of particular interest in the new plan are the piano, lamp, kitchen, linoleum, carpet and rug and sleep departments and the Drexel room, these arranged on the floors in a manner most inviting to the retail trade.

The remodeling project consisted of opening the walls between the company's two buildings, supporting them with steel girders, with a feature being addition of a new front with windows deepened to 11 1/2 feet. New plate glass was installed with the entrance made 13 feet wide and filled with Herculite plate glass doors and side lights, making it possible to stand in the lobby and view any part of the main floor. A canopy five feet wide was installed on the building's front, curving around the Frederick Street corner to show window depth. A neon tubing strip will illuminate the company's name on the canopy's face. Show window interiors are in paneled plywood, with the floors to be covered shortly with marbleized rubber tile and dark green terrazzo to cover the lobby entrance. French doors are arranged in the windows' solid background.

The stairway was removed from the center of the main floor and installed at the rear east side, this appointed with wrought iron railing and blue-green carpet.

Removed from the east side the store office was placed at the rear center of the main floor, with another office being added on the rear west side for officials. Aisles are covered with dark green Jaspe linoleum, supplemented by smaller aisles with rubber matting. The officials' office was paneled with oak and a green twist carpet will be placed on the floor. Windows on the west side were closed and smaller openings filled with glass brick.

The office is elevated 8 inches above the store floor, with this and display niches equipped with florescent lighting. Walls and woodwork of the first floor are a pale green, with the woodwork enameled a pale gray. Concealed picture molding is installed on all walls 6 feet above the floor. Rest rooms and a drinking fountain have been provided.

Walls and ceilings of the kitchen and appliance departments are a semi-gloss white. Both floors have circulating air ducts with outlet fans for circulating air and intake ducts in the lobby, with the outlets on Frederick Street. A rear stairway has been installed to the bedding department, illuminated with indirect incandescent lighting. A room, 24 by 45 feet, at the department front has been redecorated for display of 18th Century and period furniture. The steel beams are covered with paneled molding and equipped with concealed lighting, while a grey-blue wall-to-wall carpet covers the floor, matching the walls painted a light gray.

The carpet department was moved from the east side of the building to the central part and enlarged. It contains floor rug display racks and wall racks for display of broadloom carpeting, with scatter rugs displayed on islands and wall racks. The north end f the center section contains dining room and dinette displays, with the east side devoted to bedroom displays of modern and traditional maple and the rear being utilized for linoleum displays. Woodwork and walls on this floor are painted an off-color white and dark green Venetian blinds are used at the windows.

Additional shop space has been provided at the rear of the ground floor by cutting through a partition wall. New footings were placed under all piers and floor joists leveled and braced. The former office space on this floor will be used as a gift department.

The firm now known as the Excelsior Furniture & Music Co. was started June 22, 1906, by Al Brinkopf, occupying the east 25 feet of the present location, and was remodeled in 1910 and extended back to the alley. In 1911 Henry Kimmich joined the firm and has been with it since. The building was again remodeled in 1916 and 25 feet more added to it.

It was incorporated as the Brinkopf Furniture & Undertaking Co., and operated by this firm, with Al Brinkopf as president and manager until 1923 when the company stock was purchased by A.E. Stewart, Ed Menard and Henry Kimmich, each with one-third interest. This group operated the furniture business until 1926 when controlling interest was sold to William Vedder and William Huebel, with Mr. Kimmich retaining his stock.

C.W. Bauerle became manager when in 1934 he, Robert Bauer and E.J. Bauerle acquired the Vedder and Huebel interests. Arthur R. Folsom bought the Bauer interest in 1936.

The sales force is composed of Mr. Bauerle, Mr. Kimmich, Arthur R. Folsom Jr. and Robert Schultz, with Mrs. Bauerle acting in advisory capacity as decorator and office overseer. Other employees are Otis Brennan, Paul Weber, Martin Robinson, Charles East, Milo Travelstead and George Griffin. The firm does an extensive business throughout this district and in southern Illinois.

Excelsior Furniture & Music Co. was sold by Mr. and Mrs. C.W. Bauerle and Arthur R. Folsom to a new company headed by Dean McNeil in 1953. The Bauerle company retained ownership of the building, leasing it to McNeil. The latter changed the name of the store to Excelsior Furniture Co. He operated the store until the summer of 1958, when he closed it after being unable to come to terms on a new lease agreement with the owners of the building.

The space apparently was vacant for a short time.

James H. Lee operated his Cape Ace Hardware store in that structure from 1961 until February 1969, when it was purchased by William L. and Leland J. Shivelbine. Lee closed his store and the Shivelbine brothers moved Shivelbine Music Co. to their building in August 1969.

If you'd like to read more about Excelsior Furniture & Music Co. or Shivelbine's Music Store, check out these blogs: