Retired Missourian photographer Fred Lynch recently emailed me with the suggestion that I feature Harlan "Dutch" Schrader and his Rose City Rides in this blog. He even provided an article written about Schrader and his business, published in the 1968 Missourian Achievement Edition.

Schrader established the company in 1946 and, with his wife, continued to operate it through the spring of 1974. Schrader died in November of that year. 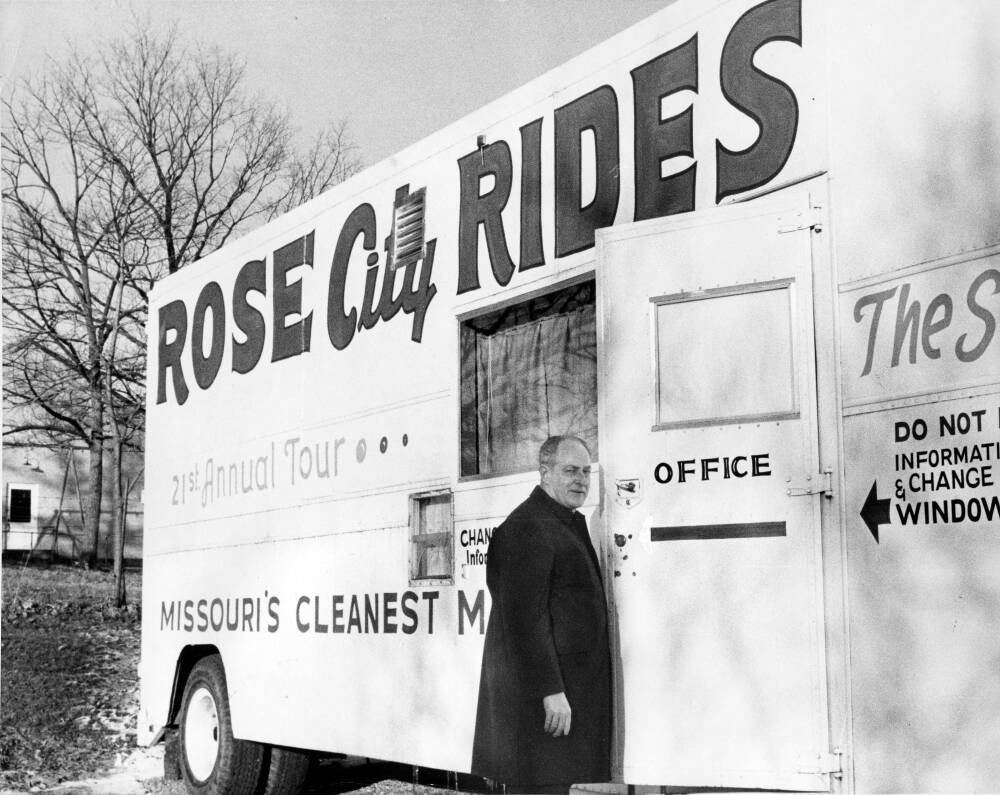 Soon the Rose City Rides, locally owned and operated, will be on the road for its 22nd season. Entering his office which travels with the Rose City outfit, is the owner-manager, H.L. Schrader. The Schraders live on Kage Road and most of the equipment is wintered there. (Bill Hampton Jr., Photography ~ Southeast Missourian archive)

"Rose City Rides" stirrings means spring is here or good old summertime is at hand. It means fun for the youngster and the older set too.

It means a bit of Cape Girardeau is on the road, with employment offered to men and women. The season is a long one and already the 1968 preparations are noted.

H.L. Schrader, backed from the home base by Mrs. (Marticia "Marty") Schrader, runs the entertainment units. If you want to name Mrs. Schrader correctly, call him Dutch Schrader. Folks will know who you are talking about.

The Schraders, including their two daughters, live on Kage Road, in the Kage School section of the city.

How did the Schraders pick the Rose City name? It came from the fact Cape Girardeau is known as the City of Roses. Schrader often ask him how come the name. Mr. Schrader likes to advertise his business and the city and the Rose City name works wonders.

His aggregation is heading into its 22nd year. The company is booked virtually complete for the spring, summer and fall.

The beginning was small, with Mr. Schrader starting with the use of two rides. He got the idea for playing at the smaller picnics. One thing lead to another and the outfit continued to grow. A run of good, steady assistants and the fact the equipment was kept in good condition led to more bookings.

Now the Rose City company annually appears at larger events in eastern Missouri as well as in this immediate area.

Rose City at times has 40 people on the job, depending upon the location, crowds and the like. Mr. Schrader has a working list of 118 individuals. They are called in when needed.

A small force was called in this month for the main readying work. The boss man likes to get a dependable force together just before the season opening, to put the equipment into shape in a short time. Then the paint is fresh and things are ready to give the boys and girls a ride or otherwise entertain them.

With inflation what it is, prices of tickets have moved up in the past five or 10 years. Transportation costs, insurance, labor and supplies have moved up and the ticket windows have to adjust their performances accordingly.

People like the type of entertainment the Rose City people furnish, and the crowds have been good.

Rose City now has 11 rides and 20 concessions. This represents a lot of preparation, and a lot of work when the day or the weekend comes for a move. Mr. and Mrs. Schrader still get a kick out of the performances by the show. Mrs. Schrader now spends about all of her time at home with the daughters when the show is on the road.

Most of the appearances are for a half week or an entire week.

Sometimes immense crowds show up for the Rose City people to serve. Schrader recalls one year at a Missouri town about 100,000 tickets were handled in a week's run, with the bulk of the rides enjoyed on a single day and evening. Advance tickets had been bought by school pupils and others, and the main run of the tickets was put to use in the one day. Needless to say it was a tiring day. It was estimated 74,000 tickets were offered during that record day.

Some of the company employees stay on a long time. Mr. Schrader said the veterans include Si Darling of Montgomery City, who has been with Rose City all along. He is a merry-go-round man, and he keeps coming back each spring.

Early in the spring the company will appear at shopping centers with rides and in April the main season will get going. The outfit regularly appears at the American Legion's annual public picnic in Cape Girardeau.

The top man of Rose City says going back to many of the eastern Missouri cities represents a homecoming for the force. The people have visited many of the communities each year.

The Schraders keep most of their equipment on their home tract on Kage Road, where a large permanent building houses nearly all of the big outfit.

Harlan L. "Dutch" Schrader, 3107 Kage Road, who for 28 years operated Rose City Rides, died early this morning at Chaffee General Hospital where he had been a patient six days. He was 56 years old.

Mr. Schrader established Rose City Rides which play at small fairs and celebrations all over the eastern part of Missouri. He was a veteran of World War II, and a member of Trinity Lutheran Church, Louis K. Juden Post of the American Legion and the Forty-and-Eight organization. He was also a member of the Outdoor Amusement Business Association and the Missouri State Association of Fairs.

The body is at Brinkopf-Howell Funeral Home where friends may call after 3 Tuesday afternoon. Service will be held at 10 Wednesday morning at Trinity Lutheran Church. The Rev. Oscar A. Gerken, church pastor, will officiate and burial will be in Memorial Park.

Marticia “Marty” Schrader, 89, of Cape Girardeau passed away peacefully Monday, Nov. 23, 2015, surrounded by her daughters and son-in-law, at Chateau Girardeau in Cape Girardeau.

She was born March 25, 1926, in Commerce, Missouri, to J. Edwin and Freida Will Blank. She and Harlan L. “Dutch” Schrader were married April 14, 1950, in Cape Girardeau. Their ceremony was performed by the Rev. Arno H. Franke, pastor of the Evangelical and Reformed Church, of which she was a member. They had been married 24 years when Dutch passed away Nov. 18, 1974.

During World War II, she worked as a welder in Kaiser Shipyard No. 3 in Richmond, California. Upon returning to Cape Girardeau, her employment included the former International Shoe Factory; the former Woolworth Store; and the former Rose City Rides.

In addition to her husband and parents, she was preceded in death by two brothers, Harry and Freddy Blank; an infant brother; and an infant sister.

Visitation will be from 10 a.m. to service time Wednesday at St. Andrew Lutheran Church in Cape Girardeau.

The funeral will be at noon Wednesday at the church, with the Rev. Mark Martin officiating.

Memorials may take the form of contributions to the Alzheimer´s Association or the American Cancer Society.

Online condolences may be sent to the family by visiting mccombsfuneralhome.com.