Bartholomew Cousin, secretary of the Cape Girardeau's founder, Louis Lorimier, may be one of the town's greatest mystery men.

From his long-missing will, the contents of which were quoted by earlier historians, we know he was born March 18, 1767, three leagues west of Cherbourg, France, to Marin Cousin, a farmer, and Magdaline Pienot, his wife.

We also know from his will that he departed France in 1791 for the West Indies. It is believed he settled in Cape Girardeau in about 1793. Historians say he was well versed in French, English, Spanish and Latin. He is credited with preparing the first plat map of Cape Girardeau in 1806.

Cousin died in Cape Girardeau in 1824 leaving a large estate, including his home here, which he bequeathed -- along with its furnishings -- to Agatha Steinbeck, Louis Lorimier's daughter. Along with the will that disappeared decades ago from the county's files is the whereabouts of Cousin's final resting place. Most likely he lies in an unmarked grave in Old Lorimier Cemetery.

My interest in Lorimier's right-hand man was sparked recently by several articles I found while researching the Out of the Past. Seventy-five years ago saw the demolition of Cousin's log home, which had survived, hidden by later additions. Curiously, articles published just days apart in the Southeast Missourian in 1946 present another mystery. They give two different locations for the house, the first on Spanish Street, between Themis and Independence streets, and the second on Spanish, south of Independence. With help from several historians, I've concluded the correct location was on the east side of Spanish, just south of Themis Street.

The Cape Girardeau County Archive Center supports this through a deed abstract: "Deed Book H, entry 513, page 58, 20 June 1832. John CROSS and William GARNER, executors of the last will and testament of Agatha STEINBECK, deceased, to James P. FULKERSON. For the sum of $20, Lot No. 8 in Cape Girardeau, bounded on the North by a lot sold to A.P. ELLIS, East by a lot of Gibonney & Dlashmutt, South by Independence Street, and West by Spanish Street, being part of the lot on which Bartholomew COUSIN formerly resided. Sold at public sale on 2 June 1832 to satisfy county court order of March term 1832. Signed: John CROSS, W. GARNER. Witness: Benjamin BACON (JP). Received 21 Jun 1832."

Also supporting this conclusion is an entry in a 1945 City Directory. Nancy Key and her son, Rudolph, are listed as residing at 38 N. Spanish St., and we know from a 1946 article they were the last occupants of Cousin's house before it was razed.

Here are the articles that have caused so much confusion for the last 75 years.

OLD BUILDINGS BOW OUT TO LET NEW ONES RISE

Razing of two large old dwellings on the east side of Spanish Street in the block south of Independence Street, owned by the Juden-Houck-Frissell estate, has started in order to make the area available for use as a parking lot.

Representatives of the estate reported the parking lot, to be 150 feet long and 130 feet wide, is being planned for 100-car capacity and will be for free use of tenants of the estate and their customers. Patrons showing purchase slips from tenants operating stores will receive free parking and a plan for making a nominal charge of 10 cents to others is being worked out...

Dwelling of another day

The two dwellings being razed are many years old. One, the brick, was the old T.B. Morrison place, and the history of the other is a little vague, but it is one of the older frame structures remaining. During the past few years the places have been used by low-price rooming establishments.

Another dwelling on the same (east) side of Spanish Street, but a block farther north and located just off Themis Street, is to be razed shortly. This dwelling and the buildings on the southeast corner of the Themis Street intersection are owned by Dr. A.G. Juden. Application has been made to the Civilian Production Administration for a permit to erect a one-story office structure on the site. Plans also are being made to remodel the corner building, to be temporarily occupied by Southern Trailways Terminal and formerly used by the Cape County Social Security Commission. Negotiations are pending for retail tenants for this structure.

Now, it appears, the end of time has come in Cape Girardeau for others of the city's older structures. Workmen are completing the razing of a large two-story brick building at the southwest corner of Sprigg and William streets to make room for a brick building being erected by the Cape Tire Tread Co.

Still another old frame dwelling located on the north side of Broadway just east of Pacific Street, is to be razed soon, it is reported. It is adjacent to the new Esquire Theater, now under construction. Another old dwelling being torn down is located on Good Hope Street between Fountain and Middle streets. This razing is making way for the Cape Transit Corporation's new terminal. Just a few weeks ago the old Adams House in the 1100 block on Broadway was razed to make room for a new structure to be erected later.

Another of Cape Girardeau's old landmarks, like several others in recent months, is disappearing to make room for modern structures. This building is an old two-story dwelling located on the east side of Spanish Street, just south of Themis Street.

The property was purchased some time ago by Dr. A.G. Juden, who is razing the dwelling to make room for a new office structure.

Originally the house was a one-room log structure built back about 1810 by Bartholomew Cousins, a civil engineer, who really did a lot of work for the city's founder, Don Louis Lorimier, although he is not definitely credited with actually laying out the original community. This house was his home for years.

This Mr. Cousins was credited with being quite a personality. He acquired considerable land from Lorimier and was one of the prominent men of that 136-year-ago period. There is no record of when he died nor where he is buried, but he is presumed to have died about the time that Lorimier succumbed and rests somewhere here in an unmarked grave, which never has been found. Cousins, besides being an engineer, was a lieutenant of Lorimier.

Cousin's daughter, Agatha (actually, Lorimier's daughter. - Sharon), inherited the property from her father and moved a slave family into it. Later it was bought by Daniel Steinbeck (Daniel was Agatha's husband. - Sharon), who remodeled it and then it passed to the ownership of a Dr. Grisham, who made further improvements, for 50 years it has been occupied by white families. Rudolph Key and his mother, Nancy Key, who occupied the dwelling for 24 years, only recently moved.

As the years went by the house was added to and for many years it has had two floors. As workmen tear away the more modern cloak the original construction has come into view.

Today the old logs of the original part of the dwelling were visible as the more recent additions to the house were torn away. While not very long, the longest not more than 10 feet, they were heavy and about a foot wide and about eight inches thick. Some of them were in short sections around the windows, and all were put together with pins, rock and clay. They were not in a very good state of preservation, most of them having started to decay. 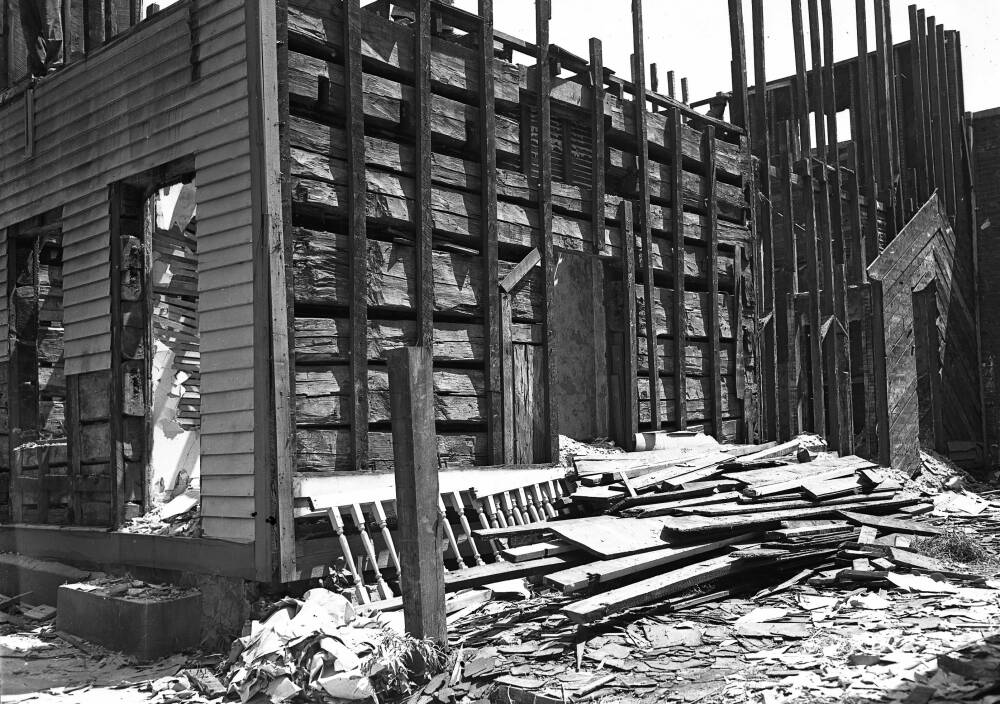 The picture above shows the old logs in a 136-year-old dwelling on Spanish Street, just south of Independence street, being razed by Dr. A.G. Juden to make room for his new office building. The logs were part of the original structure erected about 1810. (G.D. Fronabarger ~ Southeast Missourian archive)

One of the hewn poplar logs from the ancient Cousin house on South Spanish Street, was obtained by curator A.S. Duckworth for the State College museum. The old house is being razed to make way for a modern building.

Joe L. Haas also secured a short section of log, evidently poplar, and it is on exhibit at The Missourian office.

Of Barthelemi Cousin, who occupied the house, and was Don Louis Lorimier's secretary and interpreter of German, French and Spanish, Houck's history of Missouri says: "Cousin, the most conspicuous resident of the post, resided not far from Lorimier near the corner of the present Main and Themis streets, in a small log house. The road along the river was then called 'Rue de Charettte.'"