What do William H. Escue and White Mule have in common?

Not a thing, except for articles about each that appeared in 1921 in consecutive editions of the Southeast Missourian. So, even though there's no real connection between the two, I found both articles interesting enough to share them in a blog.

Published June 2, 1921, in the Southeast Missourian:

"Cape Girardeau people are the kindest I have ever known," says William H. Escue, sailor and soldier of fortune, who has sailed the Seven Seas, tramped on every continent, rubbed shoulders with cannibals on the South Sea Islands, and finally, at the age of 76, has arrived here, where he is satisfied to let the long trail end, he says.

About six Sundays ago, according to Escue's count, he arrived in Cape Girardeau, a little "down on his luck" and was employed by George P. Marsh to do odd jobs around the Marsh residence at Fountain and Independence. His work was satisfactory and he liked the town, so he stayed. Finally, he sent for his tool chest, which contains, besides numerous ship tools, souvenirs from all parts of the world — a tomahawk from Oregon, where he owned a homestead in the early days, an opium pipe he wrenched from a Chinaman in Asiatic seas, pictures and newspaper clippings from all parts of the United States, and many other interesting relics. Last night, he mounted his old sea telescope, and let neighboring children look at the stars through its lenses.

Although he fought in both the Civil and Spanish-American wars and is now about 76 years of age, he speaks apologetically of being unable to take an active part in the late World War, sorry that he has missed some of the world's excitement. "Will," as they call him, is never better satisfied than when he is telling of the many voyages upon which he says he has sailed in search of adventure. He has been in three shipwrecks, once off the southern coast of Oregon in the '70s, then again in the late '90s, when the "Old Mexico" went down off the coast of Alaska, and for the third time in '98, when "The City of Spokane" struck an uncharted rock in the Behring Strait. He had a narrow escape from drowning in the last wreck, being forced to cling to a piece of driftwood for several hours before being picked up, he told the reporter.

Escue is familiar with practically every large port of Europe. Speaking of Brest, France, he mentioned the great walls, the park overlooking the bay, and the striking features of the town, which are so well remembered by the majority of the A.E.F. (American Expeditionary Force) He can vividly recall wild scenes of gambling at Monte Carlo, although he contends that he was only a spectator.

At one time, he was a member of the Salvation Army in London, and claims to be as well acquainted with parts of London and Liverpool as he is with Cape Girardeau. He tells of visits to Five Points and faithfully describes the scene of William Booth's first mission, which he often attended while in London. He expresses a great liking for London, but says that it is too much trouble to get around there, mentioning, for illustration, that one can get on a street car and ride three hours without getting anywhere. He also confesses a great dislike for Plymouth and Amsterdam.

One time, while in an African port on "the British Isles," he made up his mind to try his fortune in the diamond fields of Africa, and deserted. However, he never reached the great Kimberly mines, but was captured and thrown in jail at Capetown, Africa, as, under English law, it is an offense to desert a boat on which he has been signed as a sailor.

At another time, a boat on which he was sailing, was stuck in the black mud of the Ganges River, and the only thing they could do was to wait until the water rose again. Melbourne and Sidney, Australia, are mentioned by him as being fine towns, although he is well acquainted with several towns of that continent, having tramped across the entire country at one time.

Probably William Escue's most interesting tales, if it is possible to judge which are the most interesting of the many wild, adventurous tales that he tells, are the stories of experiences on the South Sea Islands. His favorite islands are "Babe" and some of the Solomon Islands, where he has sailed on pearl-buying expeditions. He tells of transactions, which has witnessed, where a dozen bandanna handkerchiefs were traded for teacups full of pears. Bebe Island, he says, at one time was ruled by a medium-sized man of English descent, who had 36 wives...

Although Will is a hard worker, he was impressed with the indolent habits of the South Sea Islanders, claiming that all the native men have to do is sit in the shade and fan, while the numerous wives do the necessary labor. Usually his male listeners interrupt him, while he is orating on the many beautiful features of the island and its fine breeze, inquiring the nearest way there, so that he has to stop and explain that it is directly on the road to Australia from the Philippines. The cannibals and the white ants are the worst things on the islands, he says, and of the two the ants are probably the worst, as they eat everybody, while the cannibals only pick on missionaries.

When the Alaska gold rush was on, Escue started for the Klondike, but never reached there, because he saw an opportunity to make some "easy" money, carrying packs from Die over the White Pass on the way to Crater Lake. Several of his old friends, with whom he used to drink at Clancy's in Seattle, died in the Klondike, he says. He accounts for his good luck in escaping several dangerous Arctic whaling expeditions, by the fact that he was sly and never got drunk, and they never could "shanghai" him as they did others.

On May 2, 1915, he left Astoria, Oregon, in a small skiff and with the exception of 185 miles, where the boat was transported across certain mountain ranges by railroad, the entire trip was made by streams to New Orleans; probably one of the only trips on record of the kind, from Atlantic to Pacific, he says. He had started for Rio Janeiro, and intended to stop at Panama to visit a son he has living there, but circumstances caused him to postpone the remainder of the trip, so he stopped over in a southern state and put in a cotton crop, which failed, like many others. That is why he is here in Cape Girardeau. After roaming over all the world, he has chosen this town as one of the fairest spots of all, and seems contented to call this home, he contends.

Escue claims to be of Scotch and Indian blood, and delights to speak, America's tongue. However, he admits he may be of that race of men of whom Robert W. Service speaks when he says,

"There is a race of men who can't fit in,
A race that can't stay still,
So they break the hearts of kith and kin,
And roam this world at will.

They range the field and roam the flood,
And they climb the mountain's crest
There's is the curse of the gypsy blood,
And they don't know how to rest."

I have attempted to find more information on Mr. Escue, but have been unable to do so. 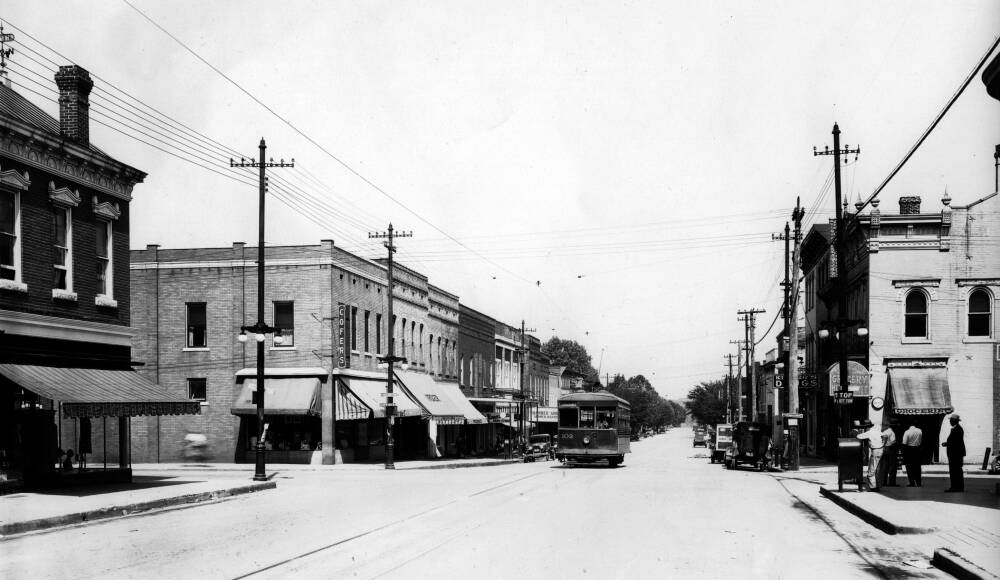 This photo was likely taken between 1923 and 1934. It shows Good Hope Street, looking east from near Sprigg Street. (Southeast Missourian archive)

Published June 3, 1921, in the Southeast Missourian:

"White Mule," corn whiskey, is becoming so plentiful in Cape Girardeau that kegs of it are being left in the streets. (Recall that nationwide Prohibition was in its second year when this article was published. - Sharon)

Passing along South Middle Street, near the intersection of College Street, Wednesday a son of Louis Hopper, residing in that neighborhood, saw a keg sitting in the weeds, just a few feet from the street. He investigated and finding the keg contained some sort of liquid, reported to older people, who found that the keg had nearly three gallons of corn juice.

The finding was reported to Chief (W.J.) Segraves, who "arrested" the keg and took it to the police station, where it has been placed under lock, to be held for further investigation. It will probably be turned over to United States Commissioner (Russell) Dearmont later.

Chief Segraves stated this morning that he has two men, living in the vicinity where the whisky was found, under suspicion of being the owners of it. He says he believes the men he suspicions are bootleggers, but he can take no action until he catches them with the goods. He is watching them closely, he said.

Speaking of "White Mule," a Good Hope Street druggist said this morning that he believes there is more whiskey being sold in Cape Girardeau at present than at any time in the history of the city.

Persons, whom he says he suspects of being bootleggers, come into his drug store daily and ask for pint bottles and stopper corks. He says he cannot imagine for what other purpose they would want that particular size bottle unless it is for measuring outs something that is sold and as so many intoxicants are seen on the streets in Haarig every night he is led to believe that the bottles are wanted for bootlegging purposes.

This druggist says a night never passes but several intoxicated persons come into his place of business and stagger around and that this condition continues to grow worse.

A professional man who happened in about the time the druggist was talking of the drunkenness said that conditions in Haarig have nothing on a certain residence district of this city. He says he has noticed many persons going into a certain house in the southwest part of the city every night after dark, for a week or more, and he is of the belief that "white mule" is being dispensed there.

Other persons in he same vicinity say that they have noticed persons leaving the house in question in a staggering condition, which has left them to believe that some sort of an intoxicant is dispensed there.