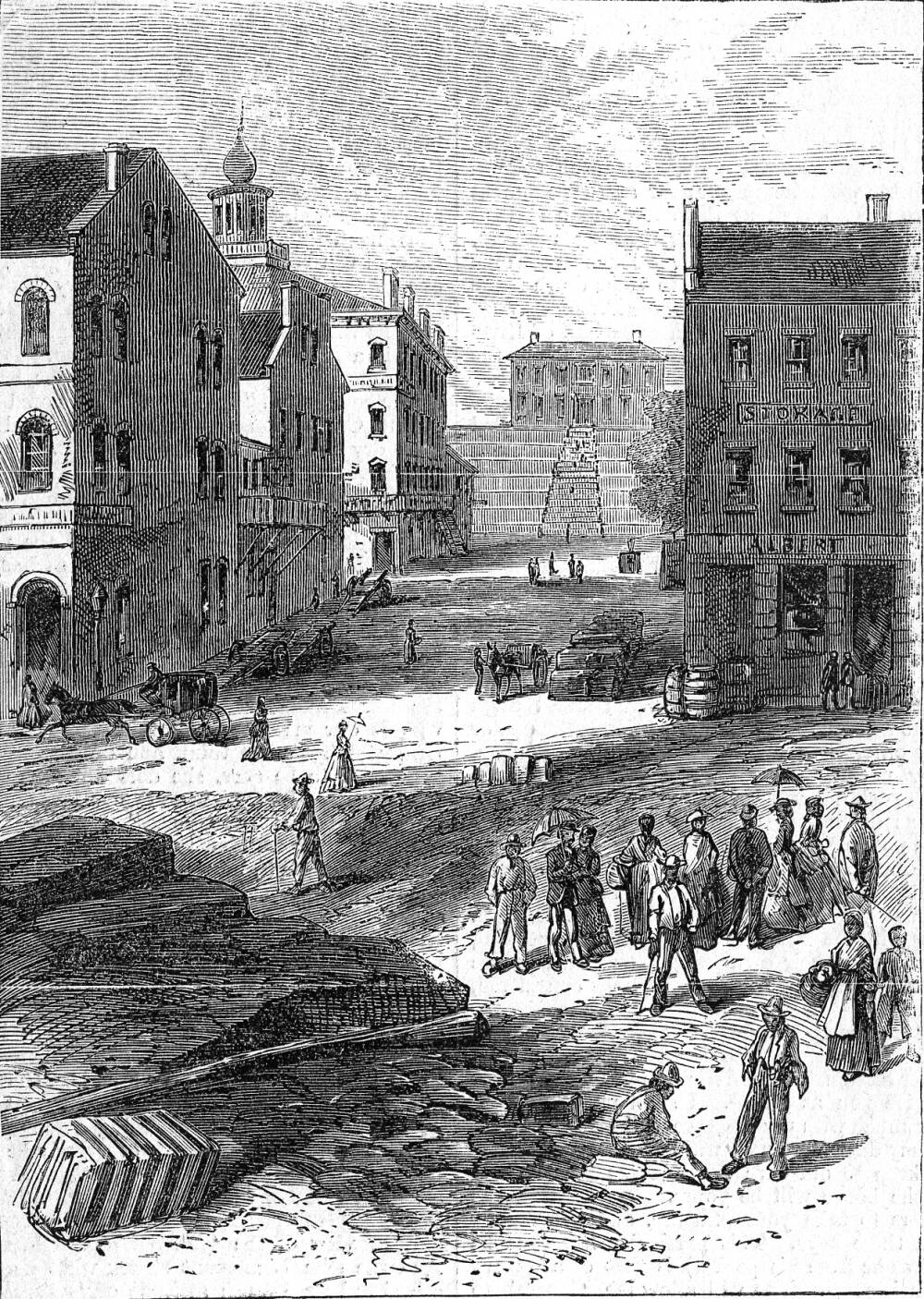 One of the earliest views of Cape Girardeau is this line drawing, which came from a circa 1870 magazine. It shows Themis Street at the riverfront, with the Common Pleas Courthouse — devoid of its wings, portico and cupola — high on a hill in the background. (Southeast Missourian archive)

Working just across the street from the old Common Pleas Courthouse, I've been taking a lot of interest in the work going on in Ivers Square, where Penzel Construction and other contractors are renovating the courthouse and the former public library and building a whole new city hall linking the two historic structures.

I am my father's daughter. He was a carpenter by training and always took a great deal of interest in construction work. I can recall him sitting on our front porch on South Sprigg Street, binoculars raised to his eyes, watching the construction of the Bill Emerson Memorial Bridge. I, in turn, am avidly watching the men and women in hardhats creating a new Cape Girardeau City Hall.

While the history of the Carnegie library in Ivers Square is well documented, the same can't be said for the old courthouse.

J. Henry Caruthers, by my count the 15th judge of the Common Pleas Court here, tried to remedy that in the 1940s, when he produced a booklet aptly titled "History of Cape Girardeau Court of Common Pleas."

The booklet tells of the establishment of the court in 1851, as well as the tax imposed on residents in 1854 to raise the $2,500 needed to construct the brick courthouse. As Caruthers noted, no plans of the original, rectangular-shaped structure have survived, but we know it was erected by Cape Girardeau builder Joseph Lansmon and measured 65 feet by 36 feet. It originally boasted no tower, cupola or east portico. All those would be added later, along with wings on the north, south and west sides.

Caruthers is silent on when Lansmon completed the courthouse or what dedication ceremonies were like.

But some 67 years after it was built, Henry D. Bruihl of Oak Ridge recalled that his mother, Anna Weise Bruihl, was the first girl to dance in the courthouse at the dedication. Here's her story.

Published June 3, 1921, in the Southeast Missourian:

FIRST TO DANCE IN COURTHOUSE

Henry D. Bruihl, a petit juror in Common Pleas Court, became reminiscent while talking to other jurors and friends in Courthouse Park Thursday morning and related some most interesting incidents.

Speaking of the courthouse, (Bruihl) said his mother, Mrs. Anna Weise Bruihl, attended the dedication ceremonies at the completion of the building and had the honor of being the first to girl to dance inside it.

The dedication ceremonies were most elaborate and, after several speeches were made, a dance was held in the room now occupied by the Common Pleas Court.

Mrs. Bruihl was then 14 years old and was employed in the home of a family named Ingram. Mrs. Bruihl's father was Herman Weise, who had come to this country from Germany, and, although he came from a wealthy family, his relatives disowned him for leaving Germany and when he returned there to claim his share of his parents' estate he was told to go back to America, that there was nothing in Germany for him. He returned here without sharing in the estate.

Compete for the honor

The Ingrams were very wealthy and having no daughters of their own to attend the dedication service and compete for the honors of being the first girl to dance in the building, they dressed Miss Weise in a elegant outfit, showered all the jewels of the family on her and took her to the service, determined to see that she should be the honored one.

There were several other girls and young women also competing for the honor, one of whom came from a wealthy family, who was "on the outs" with the Ingrams.

When Ingram learned that his adversary was endeavoring to win the honor for his own daughter, he became more interested than ever in Miss Weise and used every influence to have this honor fall to Miss Weise.

When the speech-making was over, the floor cleared for the dance and the orchestra started the music, an alert young man in the audience rushed to Miss Weise and the pair started to the dance floor, making her the honoree of the occasion.

Mr. Bruihl says his mother relates that affair quite often, especially when new friends come in and anything is mentioned about the courthouse in Cape Girardeau.

Mrs. Bruihl is still living, having recently passed her 81st milestone. She makes her home with her daughter, Miss Belle Bruihl, now 61 years old, on the old homestead near Oak Ridge.

Mrs. Bruihl is helpless at present, having suffered injuries about two years ago in a fall that paralyzed her lower extremities and since that time she has been unable to walk. In fact she cannot turn over in bed, members of the family having to move her.

But, despite her infirmities, she is enjoying life and sees only the bright things, complaints never being uttered by her. Her husband, the late Henry Bruihl, died in 1898. He was one of Cape Girardeau County's most substantial citizens in his days, having served as representative in the State Legislature, as sheriff and as county judge. While a representative he worked diligently for an agricultural state college, seeing the great benefits to be derived from it. He was a farmer himself and always worked for the interests of agriculture, not only in this county, but throughout the state.

Mrs. Bruihl passed away Jan. 28, 1924 (although her tombstone at Zion United Methodist Church Cemetery at Apple Creek says 1923). Her obituary is devoid of reference to her historic claim to fame.

Mrs. Anna A. Bruihl, 84 years ago, widow of the late Henry Bruihl, died at the home of her son, Henry D. Bruihl, near Oak Ridge, at 5:45 a.m. today. Death was caused by infirmities of advanced age.

Mrs. Bruihl was born near Schnurbusch, Perry County, Jan. 12, 1840, (daughter of Christian and Augusta Weise) and had made her home in that and the Oak Ridge community all her life. She was married to Henry Bruihl on Sept. 18, 1858. Bruihl was active in political circles in Cape Girardeau County and held several important county jobs, including sheriff and collector. He died in March 1898.

Since her husband's death, Mrs. Bruihl has been making her home with her children. She was said to have been the oldest resident of the Oak Ridge community. She is survived by five children, and eight others preceded her in death. The surviving children are: Henry D. Bruihl. Mrs. Gussie Tucker and Miss Belle Bruihl of near Oak Ridge, Mrs. Will Hays of St. Johns, Washington, and Mrs. G.W. Penny of Jackson.

Funeral services will be held Tuesday at the Methodist church near Appleton. The Rev. H.E. Roos of Cape Girardeau will have charge of the services. Interment will be in the cemetery there.