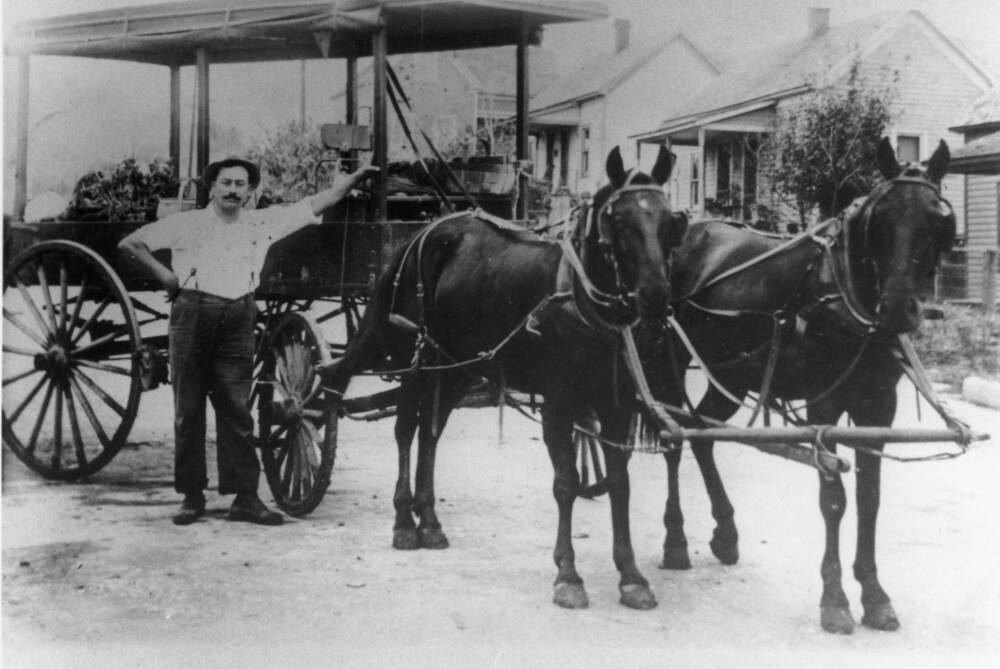 The section of Cape Girardeau known as Haarig -- the Good Hope Street area -- is historically thought of as being the German section of town.

But the area was also home to several Italian families. One notable family residing and working in the area was the Sciortino family: John (shown above); his wife, Josephine; three daughters, Rose, Angela and Catherine, and two sons, Joe and Paul.

In a submitted article published in 2006 in the Southeast Missourian, Elroy F. Kinder of Cape Girardeau, the husband of one of John Sciortino's granddaughters, provided some family history:

"Many of our senior citizens who shopped (in Haarig) the 1920s and 1930s remember the John Sciortino Fruit Market that was located on the north side at 612 Good Hope next door to Bierschwal's meat market. Some may also remember his wagon and horses that delivered and peddled fresh fruits and vegetables and also picked up produce from the riverboats that stopped here on their way downriver delivering from the Soulard market in St. Louis. The store closed in 1939...

"John Sciortino immigrated to America from Palermo in 1899 to join his brothers already in St. Louis. After working in the Soulard market in St. Louis and hearing that Cape Girardeau would be a good place to live, he came here in 1910 and began his business.

"Shortly afterward, he returned to Sicily and returned with his new bride, Josephine. They lived and started their family in rooms above the market until he bought a large two-story brick home on the southwest corner of Morgan Oak and Frederick streets, now the location of Brenda's Place. It was removed in 1968 after both John and Josephine had died. Some items, including the fireplaces, are now in the Glenn House.

"My heritage is three-quarters German, and in 1962 I married John and Josephine's sweet, dark-haired, black-eyed granddaughter, Mary Susan Sciortino."

The Southeast Missourian newspaper published a number of articles about the family. Here are a few.

Sciortino Fruit Co. has opened a fruit store at 621 Good Hope St. and will have on hand at all times the finest produce to be had.

Five Men and One Woman Pass the Test

JACKSON -- Six persons, one of them a woman, were admitted to citizenship by Judge Frank Kelly in circuit court today.

Hilarious Schmittzehe, South Benton Street, Cape Girardeau, a native of Germany, stood the examination well, and answered all questions put to him.

Gustav A. Schmittzehe, also a native of Germany, was admitted to the rights of citizenship. He said he offered to enlist in the army during the recent war, and waived all exemptions. His conduct was praised by Kelly.

Andrew J. Schmittzehe stood an excellent examination (and) was readily admitted by the court.

John Sciortino, fruit dealer on Good Hope Street, Cape Girardeau, was admitted to citizenship after Charles Moeder and Robert Vogelsang, also of Cape Girardeau, testified for him. He has been in this country for a number of years. Sciortino declared emphatically, however, that Gov. Hyde makes all the laws of the state and city of Cape Girardeau.

Mary Pruente and Frederick Heitman were admitted after passing a successful examination.

F.W. Amack represented the U.S. Bureau of Naturalization at the hearing.

The Harry C. Wasem home, corner Frederick and Morgan Oak streets, one of the finest homes in the south part of Cape Girardeau, was sold this week to John Sciortino, Good Hope Street fruit dealer. Wasem, it is reported, will give possession abut Sept. 1, at which time he will leave for Texas. Sciortino will occupy the house as soon as possession is given. The sale was made through Deevers & Braun Realty Co. 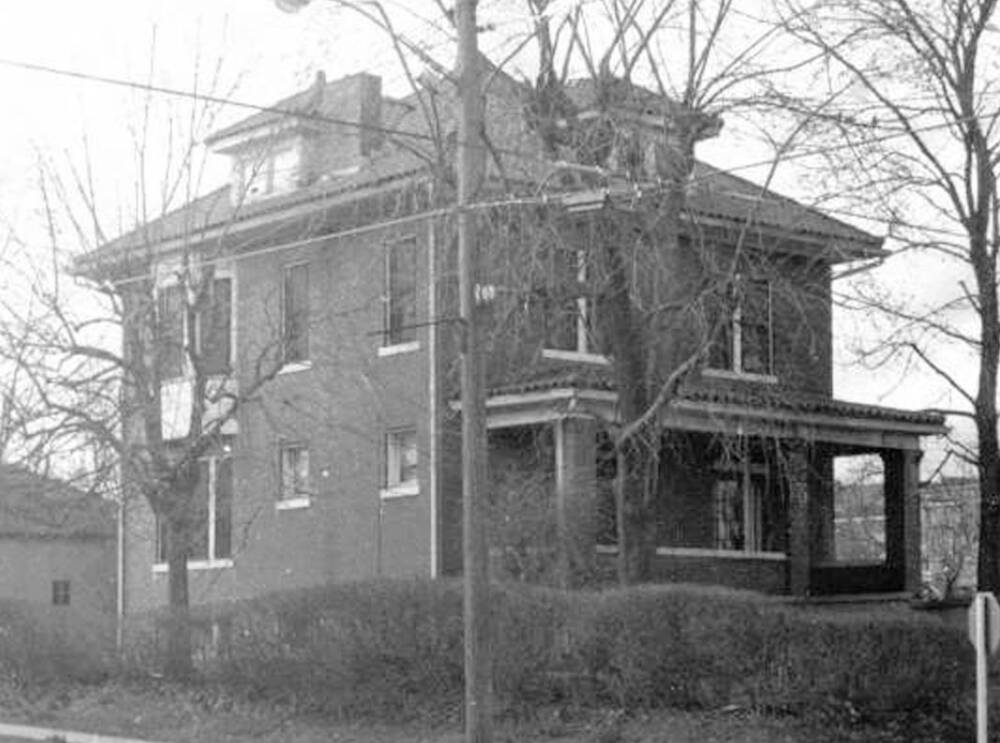 Winding up 29 years of service first in the fruit business to which he later added a grocery line, John Sciortino Monday turned over management of his store to Mrs. Lester Rhodes and son, Lester Jr., who have purchased the stock and will continue to operate the store at 612 Good Hope St.

Mr. Sciortino, who has been in ill health for over a year, causing him to be away from the store during that time, has no plans for the immediate future except to rest. His two daughters, Misses Rose and Catherine, have managed the store the past year. The family lives at 339 S. Frederick St.

Before coming here in 1910, Mr. Sciortino was connected with a wholesale fruit house in St. Louis and worked in this territory. On one trip to Cape Girardeau he so liked the town that he decided to remain and go into business.

Setting up a small store at 621 Good Hope St., Mr. Sciortino first handled only fruit. After six months in that place, now the location of the Southeast Savings and Loan Association, the fruit store was moved to its present site, where it has been since.

As the years went by Mr. Sciortino gradually added a line of groceries. During the span of years, the retiring grocerman has seen many merchants come and go in that business section and at the time of retirement was one of the few remaining retailers in the Good Hope Street district.

(NOTE: The frame building housing the Sciortino market continued to be used as a grocery, restaurant, clothing outlet, etc., until it was torn down early in 1960. The city had deemed the structure unsafe and asked its owners -- the Blattner estate -- to remove it. -- Sharon) 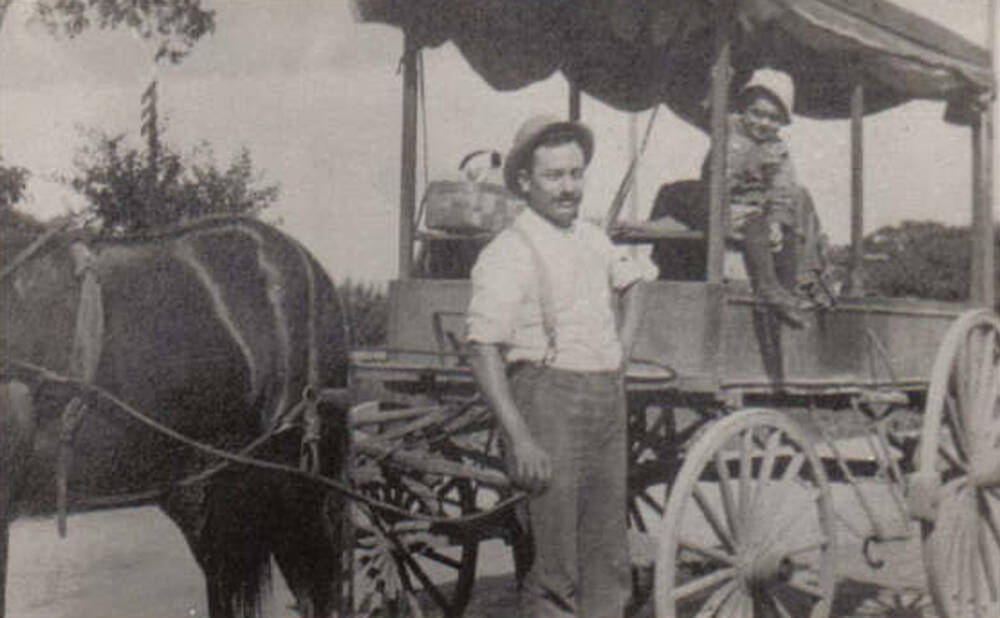 John Sciortino, 61 years old, for 28 years a fruit merchant in Cape Girardeau, died of paralysis at his home, 330 S. Frederick St., at 4 o'clock Friday afternoon. He had been in poor health for four years, and suffered a stroke Sunday night.

Coming to Cape Girardeau 30 years ago, he was actively engaged in business until Oct. 1, 1939, when he sold his store at 612 Good Hope St., and retired from active work. The family has resided at the South Frederick Street address for 17 years.

Mr. Sciortino was born at Palermo, Italy, June 26, 1879, a son of Joe Sciortino and Rose LaMontia. He came t America when 12 years old, and during his lifetime crossed the ocean to Europe five times.

One trip was for the purpose of going into the Italian army, in which he served 18 months, and one trip was to be married. Mrs. Sciortino was before her marriage Miss Josephine LaMontia, and they were married Feb. 22, 1906.

He first worked in America for a wholesale fruit firm in St. Louis, then was sent by the company to Marion, Illinois, to open a fruit market. While there a salesman told him of the merits of Cape Girardeau, and he decided to come here and start his own store.

Mr. Sciortino was a member of St. Mary's Catholic Church and of the St. Joseph's School Association.

Funeral services will be conducted Monday at 9 a.m. from St. Mary's Church, with the Rev. H.F. Schuermann in charge. Burial will be in St. Mary's Cemetery.

Members of the parish, of the school association and the Knights of Columbus will meet at the Walther Funeral Home at 8:15 o'clock Sunday night for recitation of the rosary.