Did you ever hear the story about the inebriated man who rode a borrowed horse up the south steps of Common Pleas Courthouse Park and then reversed himself and rode the nag down the east steps?

I thought of that tale recently when I ran across a photo of some brawny college men pushing and pulling a 1908 Ford automobile up the front steps of Academic Hall in 1946. Here's the story, and I apologize that the image reproduced from microfilm isn't better. 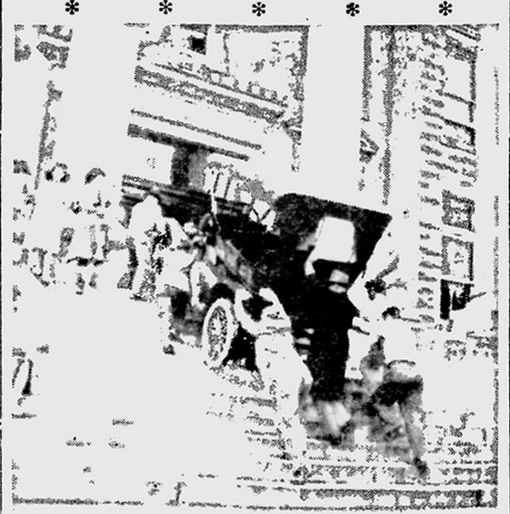 AN OLD AUTO GOES TO COLLEGE

Quite an engineering feat posed itself for members of the Black Mask Dramatic Club Thursday afternoon when, after a lengthy search, they finally found a 1908 model automobile to use in their production, "I Remember Mama," one of the highlights of the State College homecoming.

There was no way to bring the vehicle in the back way, and the front entrance to staid old Academic Hall looked like quite a haul, but appeared the only solution. With faculty and scores of students as onlookers and kibitzers, brawny arms of men students half pushed and half carried the machine up the two small flights of steps on the walk and then up the larger ones at the building's entrance. (The accompanying photo illustrates the task.)

It was rolled through the front doors and up the stairs to the auditorium. Although carefully measured beforehand, it was found that the aisle in the auditorium was too narrow, so the auto was lifted to boards across the backs of seats, after which the huskies got beneath and proceeded to carry it down the aisle and onto the stage.

The car, a 1908 model Ford, belongs to M.B. Craig, 617 College St., and is in perfect running order. It was originally purchased in 1909 by Dr. H.L. Cunningham. He traded it in and in 1913, Mr. Craig bought it, continuing it in operation until 1926, when he purchased another machine. Kept in a garage at his home, he views it as a relic and as such, keeps the motor, the original, incidentally, in exact tune.

What's that you ask? What happened to the inebriated man on the borrowed horse?

MAN HELD AFTER HE RIDES HORSE DOWN STEPS OF COURTHOUSE PARK

They say horsemanship is rapidly becoming extinct since the advent of the motor car, but one Girardean apparently has set out to refute the theory.

Chester Smith, 22, was taken into custody at midnight Wednesday by Chief of Police Jesse Crafton, after the police chief had been informed that Smith had ridden a horse up the south steps of the entrance to Courthouse Park and then polished off a nearly perfect performance by riding the animal down the more difficult and longer east flight of steps.

The horse and man were resting on the Spanish Street pavement at the foot of the east flight when Chief Crafton arrived, after women living in the neighborhood had made complaints. Smith said he had been out riding. He was arrested on a drunkenness charge and lodged in the city jail.

Chief Crafton said the animal, which is said to belong to a relative of Smith, was injured and was removed to Kimmel's barn.

Regarding the Black Mask production, the May 18, 1946, edition of the Missourian noted the show was a success:

"A crowd which left but few vacant seats in the auditorium Friday night greeted with enthusiasm the Black Mask Dramatic Club's presentation of 'I Remember Mama,' opening event of the four-day (homecoming) program.

"The play was followed by an on-the-stage party by the club for its former members at which 'Mama' served coffee and sweet rolls..."