Conversations with Dr. Frank Nickell, Cape Girardeau's unparalleled historian, tend to start with a single question and eventually meander through a variety of topics.

What started as a discussion recently of the goings-on at the Kellerman Foundation, where Frank is the resident historian, drifted into a brainstorming session where suggestions for future foundation displays flew about the room like a shuttlecock in a high wind. One of the topics suggested was Cape Girardeau baseball, which naturally veered off into a discussion of local players who made it big, men like Iron County native Charles "Jeff" Tessreau, who pitched for Perryville, and Cape's own "Big Elam" Vangilder.

That discussion, along with an email query about Vangilder, sent me diving into the family's clippings file, where I discovered this gem from 1974. Only two photos were used with the story, but photographer Gordon L. McBride shot almost a whole roll of film that day. I thought it'd be a shame not to share some of those, too.

Published July 7, 1974, in the Southeast Missourian: 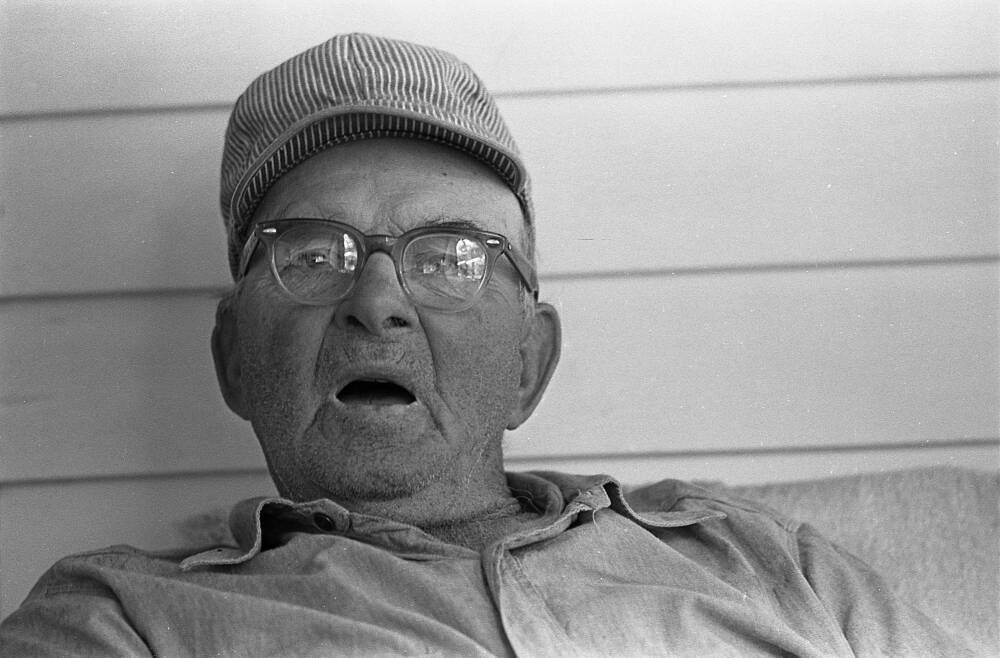 Elam Vangilder, remembering when he almost pitched the St. Louis Browns to the 1922 American League pennant and wondering what will become of the game he used to play. At 78, he's still a good hand at raking hay and remembers more about baseball in the '20s than most people can recall about the day before yesterday. (Gordon L. McBride ~ Southeast Missourian archive)

AN OLDTIMER WHO HAD A GOOD OLD TIME

They called him Big Elam and from 1919 to 1929 he was the pride of Cape Girardeau, pitching in the big leagues for the St. Louis Browns and then for Detroit. He ended his career with a record of 100-102, pitching in 367 major league games. His best year was 1922, when he won 19 games, hit .344, and the Browns lost the American League pennant to the Yankees by one game.

Today Elam Vangilder lives just outside Cape Girardeau on a 213-acre farm he acquired in 1934. He is 78 years old and supports himself with a World War I pension and the money he and his wife Helen and their son Kenny make from the farm. As he puts it, he's "just an ol' country boy."

With the semi-seclusion afforded by the farm and a scrapbook full of old glory, Elam Vangilder has remained what he always was -- someone who used to just rare back and let it fly, whether it was a baseball or an opinion.

He once bested Dizzy Dean in a game played at Charleston, Missouri, striking out 22, while Dean could only get nine of Vangilder's Capahas on strikes. Before the game Dean had called the Cape Girardeau ace, who had already passed his major league playing days, an old man and a bush leaguer.

Vangilder's own mouth once got him thrown off a team in Texas when a strategy move had Elam loudly worrying about his manager's sanity. He got a trip home for his trouble.

'Lam, as his friends call him, is fast becoming an anachronism, but one whose disbelief at the present way of life is at times a message of insight rather than ignorance. Contemplating politics, prices or a tape record, his reaction of "I just don't understand it" seems to say a lot more about those things than about him.

AstroTurf, player strikes and extravaganza scoreboards are not part of Elam Vangilder's baseball, though he's still on top of things enough to think that the Cardinals will have trouble with Reggie Smith, just like the Red Sox did. A friend brings a copy of The Sporting News, once the baseball bible, to church for Elam to read second hand. He wonders about players who can't hit .300 on a jack rabbit pool table, when his own contemporaries couldn't get into the Hall of Fame doing a lot better. 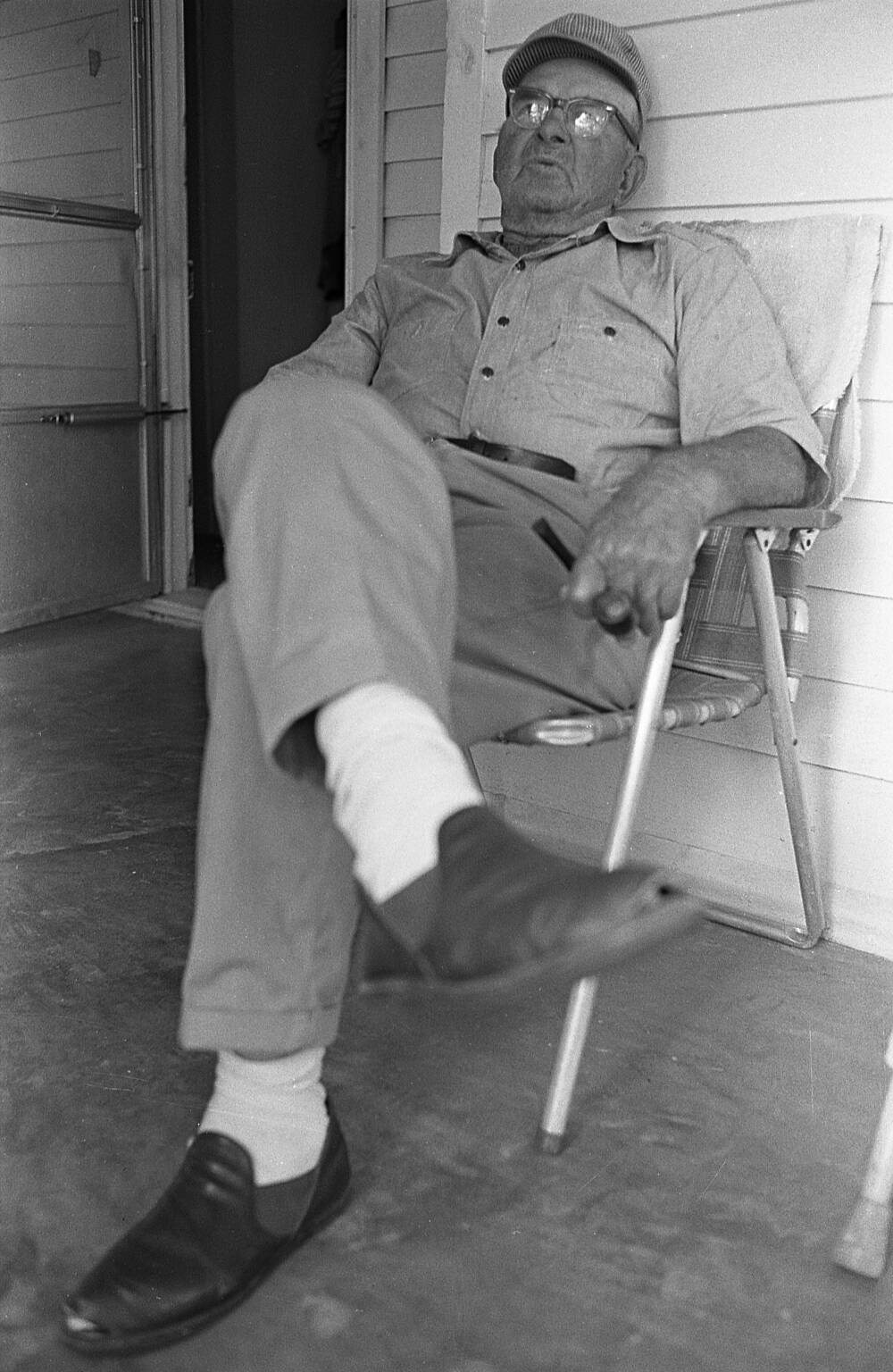 Hitting the ball "a country mile," the beanball and the spitter are terms he grew up with and used, very literally. He remembers Carl Mays, who was run out of the league because he killed a player with a beanball. Apparently Vangilder was better at just plain pitching than he was at throwing some of the underhanded tricks of the trade. In one game he took aim at Leo Durocher's pesky mouth four times but never got him.

Vangilder says, "You can't just use saliva, (on the spitball) it won't work. But some of those guys would cut strips out of their gloves and put resin in it to rough up one side of the ball and make it move a lot." There is more than a trace of disappointment in his voice when he adds, "I never could get it to work right."

Starting at the age of 15 with an area team known as the Jungle (Giants), Vangilder progressed to the Triple-I League and then to the Western League, all the while maintaining ties with Cape Girardeau's Capahas. Drafted, during WWI, he played for the Army team against the Browns in Texas, soon becoming a member of the St. Louis American League team. He continued pitching for the Capahas after the close of each of the major league season.

He played at a time when ballplayers were just that, and not businessmen. Lefty Grove, Walter Johnson, Tris Speaker, Cobb, Ruth and Gehring were all his opponents and some of them were his friends. Ruth chided him for the Durocher beanballs, advising, "You couldn't hit him with a load of shot."

Vangilder's memory is ripe with recollections of old-timers who seldom made much more than his $7,000 top salary and never worried about it much.

They played like kids in summer, seldom thinking about the approaching darkness, with winter hiding somewhere on the other side of the world.

His Capahas teammates were different from the major leaguers only in ability. They were mostly country boys who loved their baseball and who thought getting paid a few dollars to play it was the craziest thing they ever heard of. Many, when transplanted into the fast pace life of major league cities, were mistaken for characters instead of the confounded conquerors they really were.

There are stories of legendary drinkers. Vangilder pitched against the great Grover Cleveland "Pete" Alexander, who must have been snake-bitten on the ball field at least a pint worth a day. Vangilder himself has something of a reputation for slaking a thirst on a hot day, but he claims the truth is a lot drier than the stories. "I'd take a drink, I didn't care where it was, even in front of the manager," says Vangilder, "but they tell it a lot worse than it was."

There are other, more poignant tales out of that era, like one told by three old clippings in The Missourian files. The first, dated Aug. 21, 1921, reads "Jean Dale, Capaha pitcher, is given a gold watch costing $100, with inscription 'Jean Dale, Capahas, Cape Girardeau, Mo., season 1921,' and a bag of gold containing $200, by fans." Six months later Jean Dale, "idol of fans," was honored at a chamber of commerce banquet. The third story, taken from the March 26, 1942 edition, 20 years later, says "a watch bearing inscription 'Capahas, Cape Girardeau, Mo., season 1921,' is located in a St. Louis pawnshop by police. The timepiece was presented by fans to Jean Dale, a pitcher who was firing 'em over the plate."

Elam Vangilder almost died from a lung infection 40 years ago in Denver. Everyone expected him to end his ball playing days and return to Cape Girardeau "feet first," as he puts it. But he's still sitting out there on his front porch, an unsmoked pipe in one hand, resting from a morning of raking hay, and remembering how he used to fire 'em over the plate too.

Elam R. Vangilder passed away Saturday, April 30, 1977, "the only man to ever leave the baseball diamonds of Cape Girardeau and make it big in the major leagues," according to his obituary in the Southeast Missourian.

He was born April 23, 1896, in Cape Girardeau, the son of Robert E. and Ida L. Marion Vangilder. He married Helen Masterson at Jackson on April 26, 1919. He was survived by a son and a daughter, another son having died in infancy. 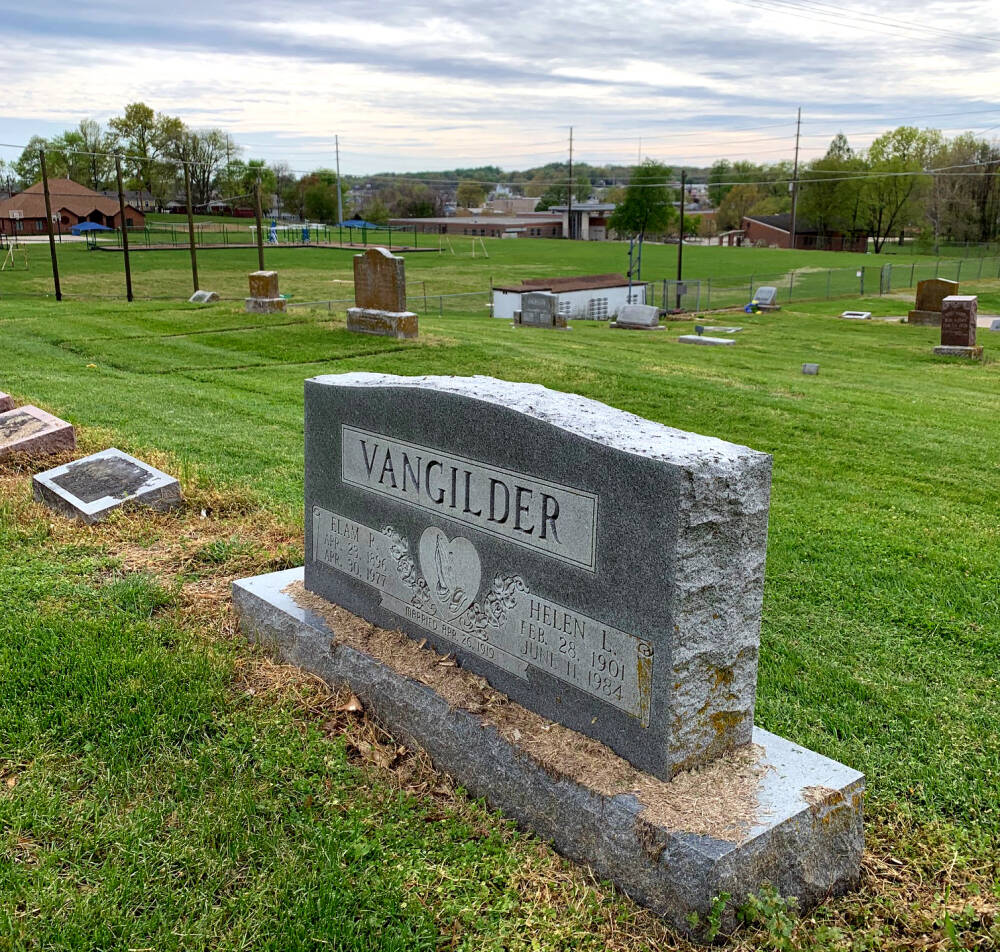 More photos of Elam Vangilder taken by Gordon McBride during this 1974 interview with Sam Blackwell may be found here.