From the archive: Home of the big chair went up in smoke in 1989

If you lived in Cape Girardeau in the summer of 1989, chances are you remember the fire that destroyed Uncle Ralph's Furniture at the southwest corner of Spanish and Independence streets.

A couple things stand out in my mind about that business and the conflagration that forced its removal from downtown Cape Girardeau to the west end.

First, this was the first time I can remember doing historical research for a front page story in the Southeast Missourian.

And, second, I recall that a victim of the fire was a massive upholstered armchair, that the furniture store's owners would use as advertising. Every day during business hours, that overgrown wing-back would sit on the sidewalk near the store's front doors, inviting shoppers in to take advantage of Uncle Ralph's huge savings.

The reason I remember that chair so well is that Big Sis and her co-workers at Griffaw Furniture Mfg. Co. built and upholstered the even-bigger replacement chair months after the fire.

Here are a couple stories about the blaze. 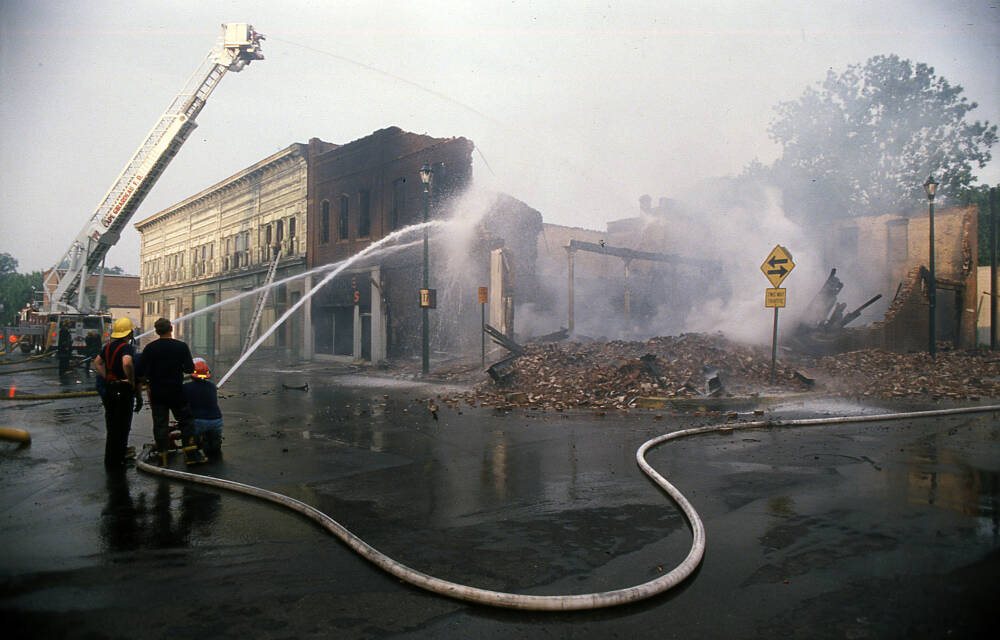 Cape Girardeau firefighters hose down the remains of a 100-year-old building this morning following a two-alarm fire that was discovered around 2:40 a.m. The building, located at Spanish and Independence streets, housed Uncle Ralph's Furniture Co. Both the building and contents were a total loss. (Mark Sterkel ~ Southeast Missourian archive)

The fire, of undetermined origin, destroyed Uncle Ralph's Furniture and the building it was in on the southwest corner of Spanish and Independence.

The building was more than 100 years old.

The fire was discovered about 2:40 a.m. when a woman who lives across the street on Independence heard the sound of breaking glass and saw flames and smoke coming from the building.

The second alarm was called in by Assistant Fire Chief Max Jauch at 2:43 a.m., when he arrived.

"The flames were already coming out of the broken windows and the side door when I arrived," said Jauch, "and I wasn't sure but what the second floor hadn't already collapsed."

Jauch said about 15 minutes later the roof caved in, allowing the flames to shoot skyward with heavy, thick smoke from the burning furniture and wood.

"It's the hottest fire I ever saw," said Fire Chief Gene Hindman. "It had the most radiant heat I've ever seen coming from a fire."

Hindman said the flames were fed by the old, dry, wooden floors and support beams and the large stock of furniture. He said the fire apparently began at the rear of the building on the side near Independence.

The chief said the heat was so intense it melted the outer jacket of a 50-foot section of three-inch hose lying in the middle of Spanish Street. The hose was destroyed.

"We tried using (one)-inch and three-quarter-inch lines on the fire, but it was like using a garden hose," Hindman said. "Finally, we had to go to two-and-one-half and three-inch hose lines before we started doing any good." 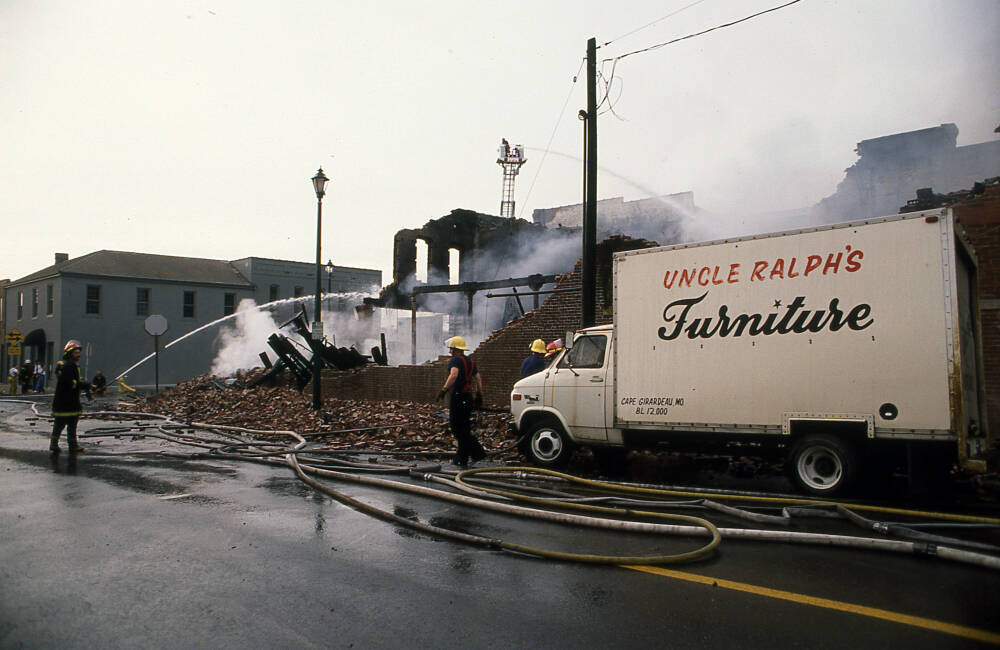 Hindman said when he left his home west of Franklin School en route to the fire, he could see the red glow in the eastern sky.

"As soon as I arrived I knew the building was already lost," he remarked.

"My first concern was to contain the fire at the fire wall between the burning building and an adjoining building on the south side. That's where we were going to concentrate all our efforts."

Hindman ordered the new 110-foot aerial platform ladder truck set up on Spanish Street to shoot an umbrella of water onto the fire to keep it from spreading to an adjoining building used as a warehouse for (Campbell) Mattress Co.

Authorities said nearly all of the mattresses stored in the adjoining building were damaged by smoke.

The chief said the fire department's platform ladder truck played a major role in helping to contain the fire in one location.

Hindman said for a while he was also concerned the intense heat from the flames might damage the two-story building on the east side of Spanish. It was renovated several years ago by John Boardman, an architect who lives across Spanish Street from the store.

"After we got some water on the fire, we got it cooled down a lot," he said.

After ordering a second alarm, Hindman moved fire apparatus and firefighters from Fire Station No. 4 to the main fire station at Sprigg and Independence as backup protection.

Men and equipment from Fire Stations 1, 2 and 3 were at the fire.

The chief said a lack of wind prevented burning embers from spreading to other buildings. "If it had been windy, it could have been a serious problem," he remarked.

The 15,000-square-foot building had no sprinklers nor fire alarms, said Hindman. 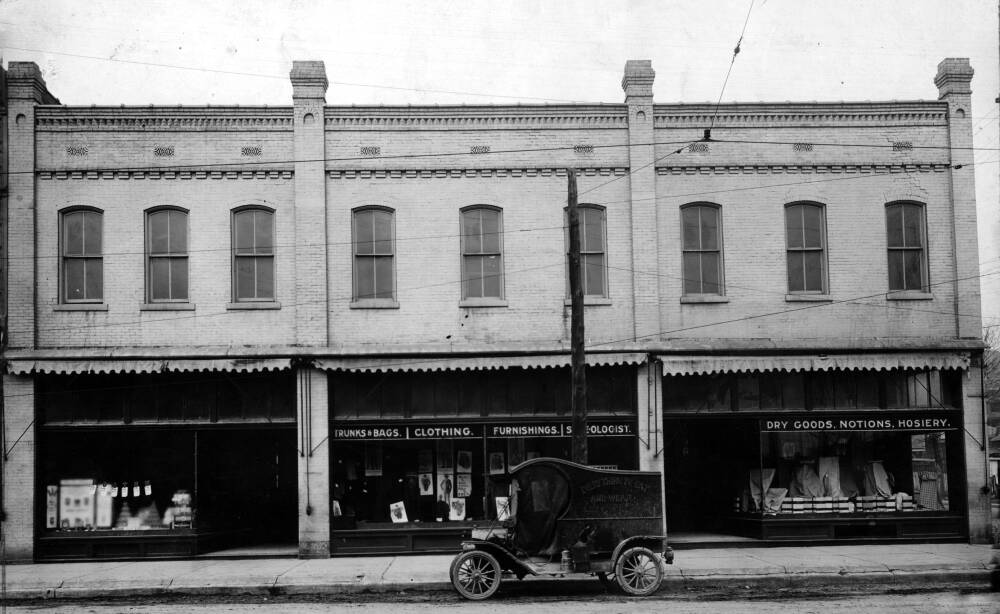 In January 1887, Louis F. Klosterman purchased the building for his "Bee" store, from which were sold groceries, dry goods and general merchandise.

In 1920, the property was occupied by Minton-Thompson Motor Co. Two years later, Albert Losse of Illmo, who had bought the building from the motor company, sold it to F. Crit Jones, a furniture dealer who went in business in August 1920.

Jones operated Jones Furniture Store at that location from either 1920 or 1922 until 1962.

In 1966, the name was changed to Downtown Warehouse.

From 1967 to 1978, the building was used by Hutson Furniture Co. as a used furniture store.

In 1979, it was leased and operated by Jim Palmer as Uncle Ralph's Furniture Store.

The fire is the third major business fire in the no-hundred block of Spanish since 1969.

In January 1969, the old I. Ben Miller building, 25 S. Spanish, which had been the headquarters and manufacturing plant for Midwest Dairy, and later used as a furniture warehouse, was destroyed by fire.

Sometime in the 1970s, fire broke out in a two-story building on the east side of Spanish in what had been known as Ruth's Bargain Barn. The building was destroyed. 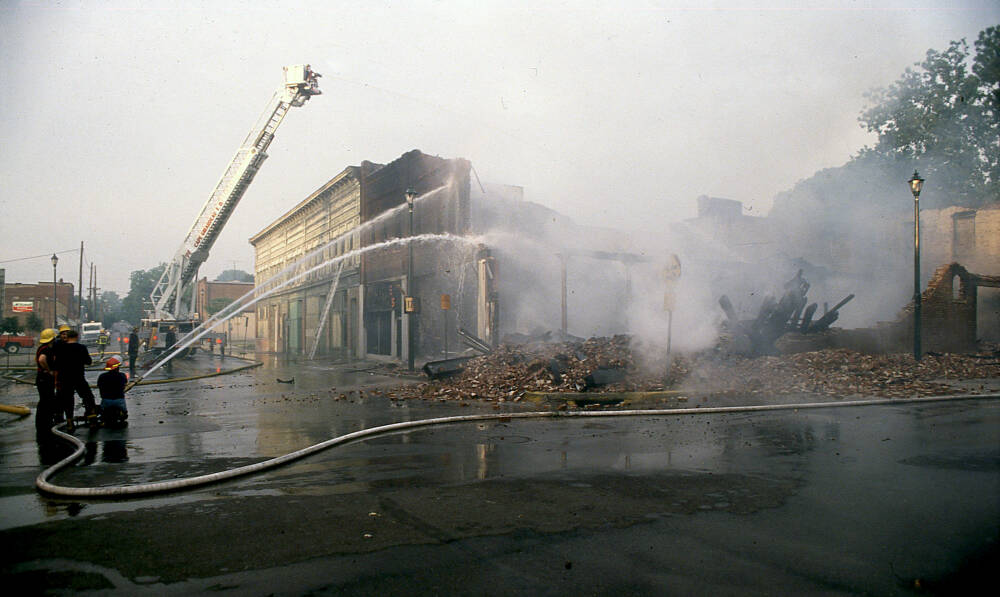 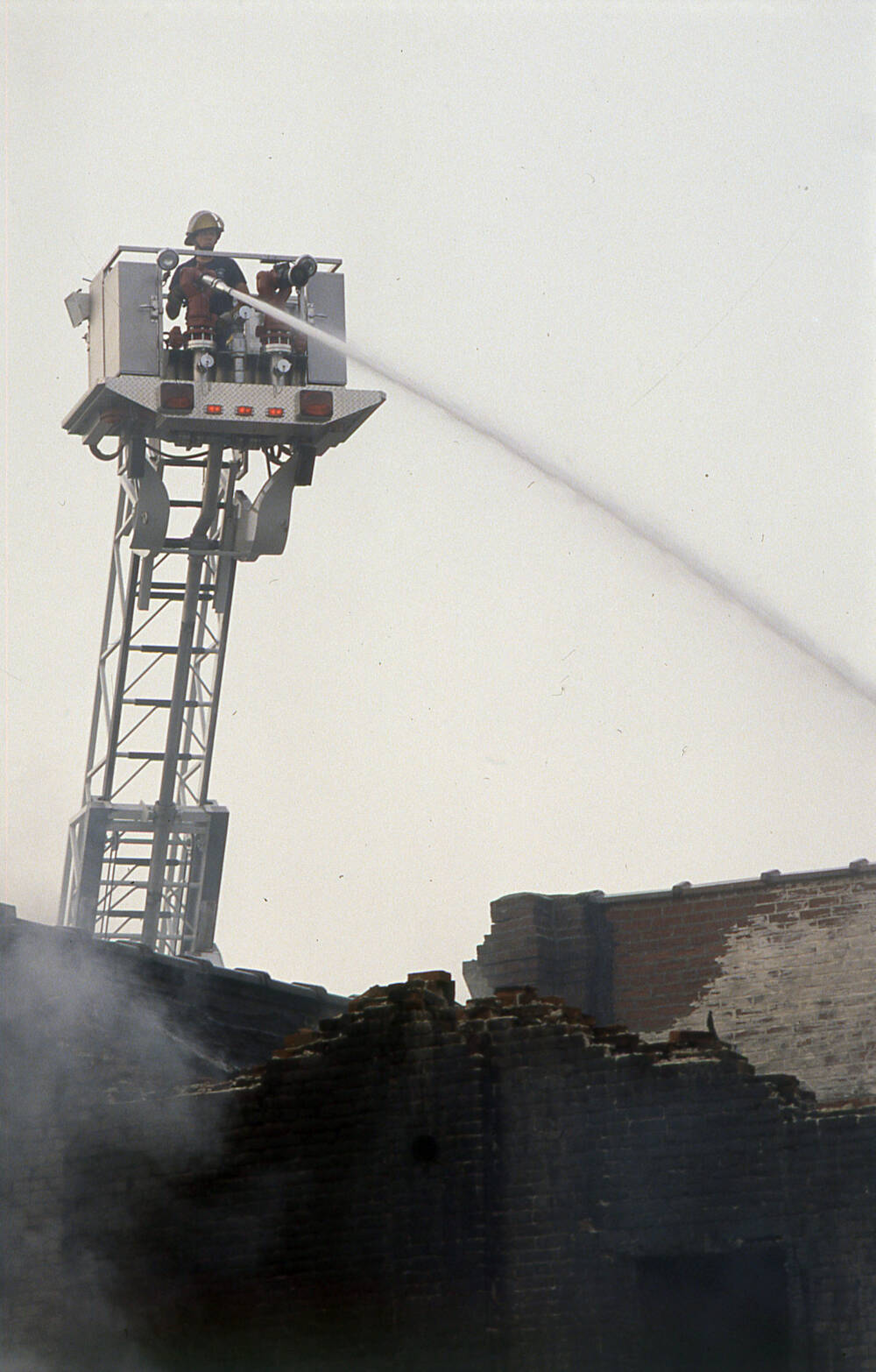 SOURCE OF BLAZE IS SOUGHT

OFFICERS OF ATF EXAMINE THE SCENE

A team of investigators from the federal Bureau of Alcohol, Tobacco and Firearms office in St. Louis was in Cape Girardeau looking into the cause of the fire Friday that destroyed Uncle Ralph's Furniture, Independence and Spanish.

"One of the local ATF agents contacted our department and asked if they could look into the fire," Police Chief Howard Boyd Jr. said Friday afternoon. "We were more than glad to oblige them; they may find something we might have missed."

Fire Chief Gene Hindman pointed out the only thing in the building that was not combustible were the brick walls and cast-iron pillars that supported large wooden beams between the first and second floor.

"The building was over 100 years old, it had wooden floors that were tender dry, and it was filled with furniture made of wood and materials that burn," he pointed out.

Hindman said the cause of the blaze has not been determined, which is why there is an investigation.

"We need to know how the fire started," said the fire chief.

The chief said it appeared the fire started somewhere toward the rear of the building in the northwest corner, near an overhead door facing Independence Street.

The ATF's evidence collection van arrived in Cape Girardeau from St. Louis late Friday afternoon. A short time later, ATF investigators put up yellow "Crime Scene.. Do Not Cross" tape around the front and side of the building.

The investigators spent the rest of the day and evening sifting through the rubble, taking samples of burned wood and subjecting them to chemical tests and analysis, and taking photographs.

A spokesman for Uncle Ralph's said the total value of furniture was approximately $150,000.

Both the building and contents were destroyed.

Because the building posed a danger to people, the fire department, after consulting with the insurance underwriters, ordered the remaining weakened brick walls demolished.

The management of Uncle Ralph's has announced they will open a temporary office on Tuesday at 109 Independence. Those who had layaways or deposits may come in or call 334-3283 for additional information.

Meanwhile, a representative of (Campbell) Mattress Co., which uses the adjoining building as a warehouse for finished mattresses and a storage area for materials to manufacture mattresses, said Friday both the stock of mattresses and materials were damaged by the heavy smoke from the fire. 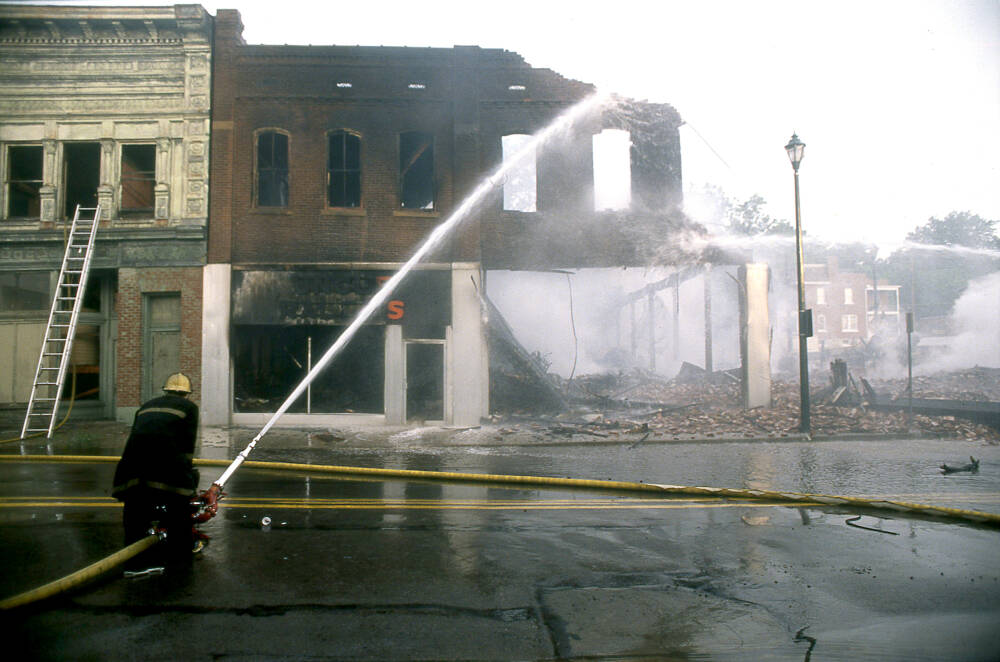 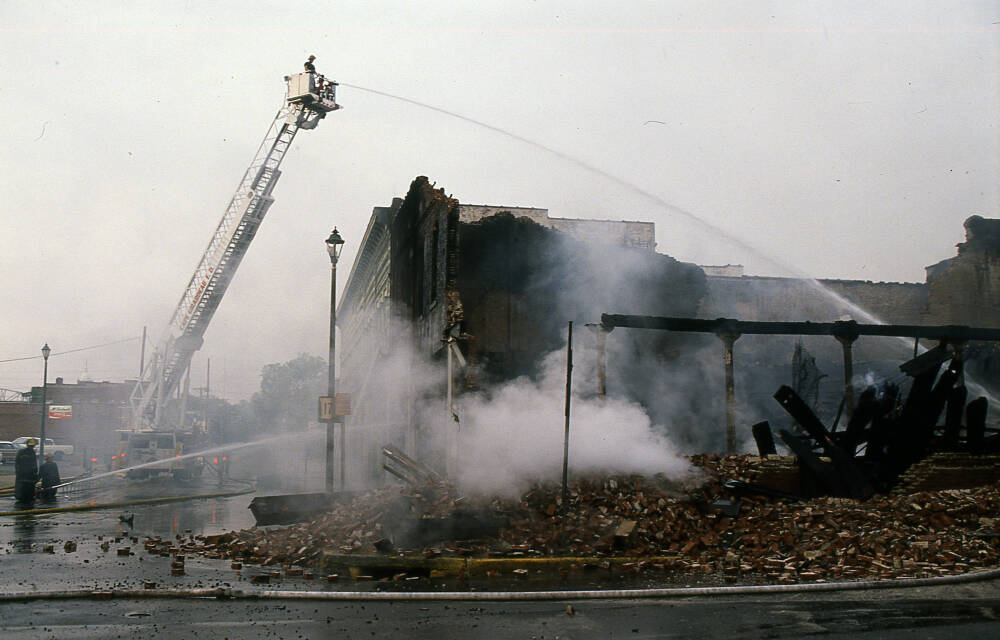 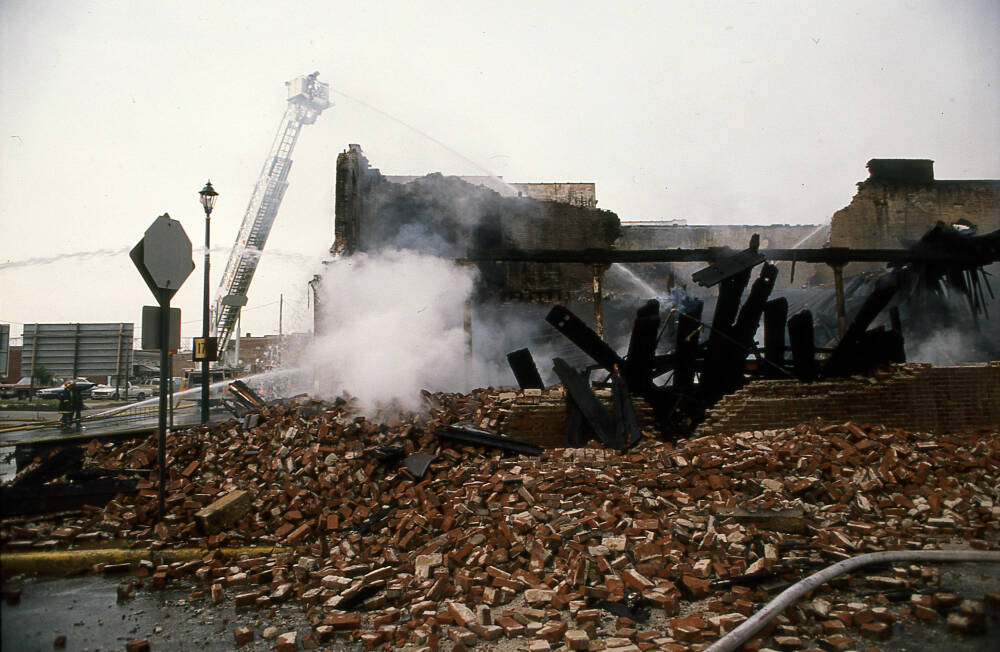 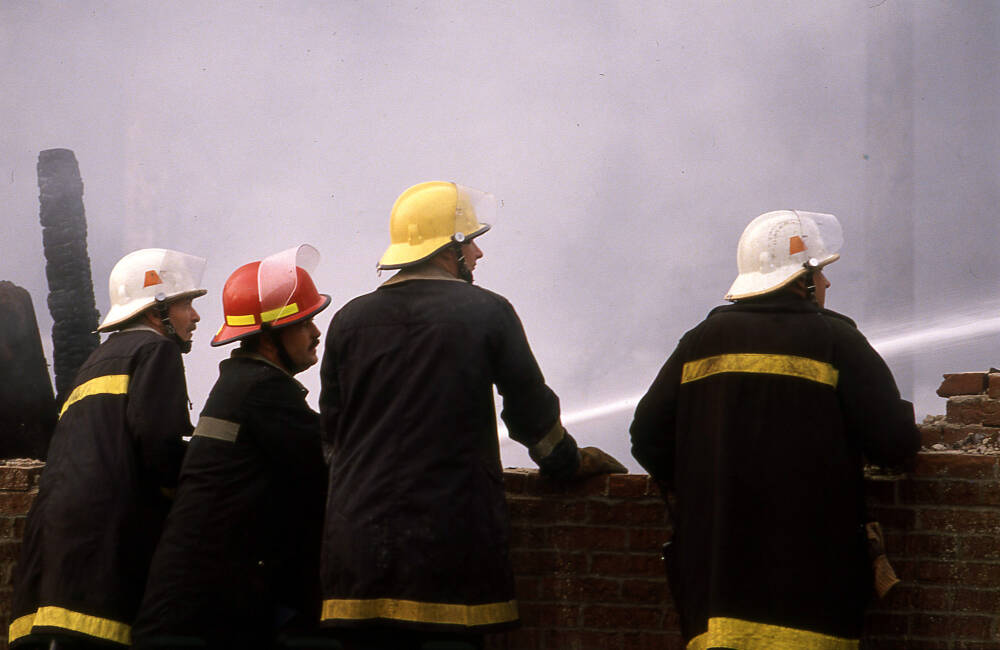 What wasn't mentioned in either of the two newspaper articles was the destruction of the big chair I mentioned above.

As I said previously, a replacement was constructed by the company my Big Sis worked for at the time -- Griffaw Furniture Mfg. Co. 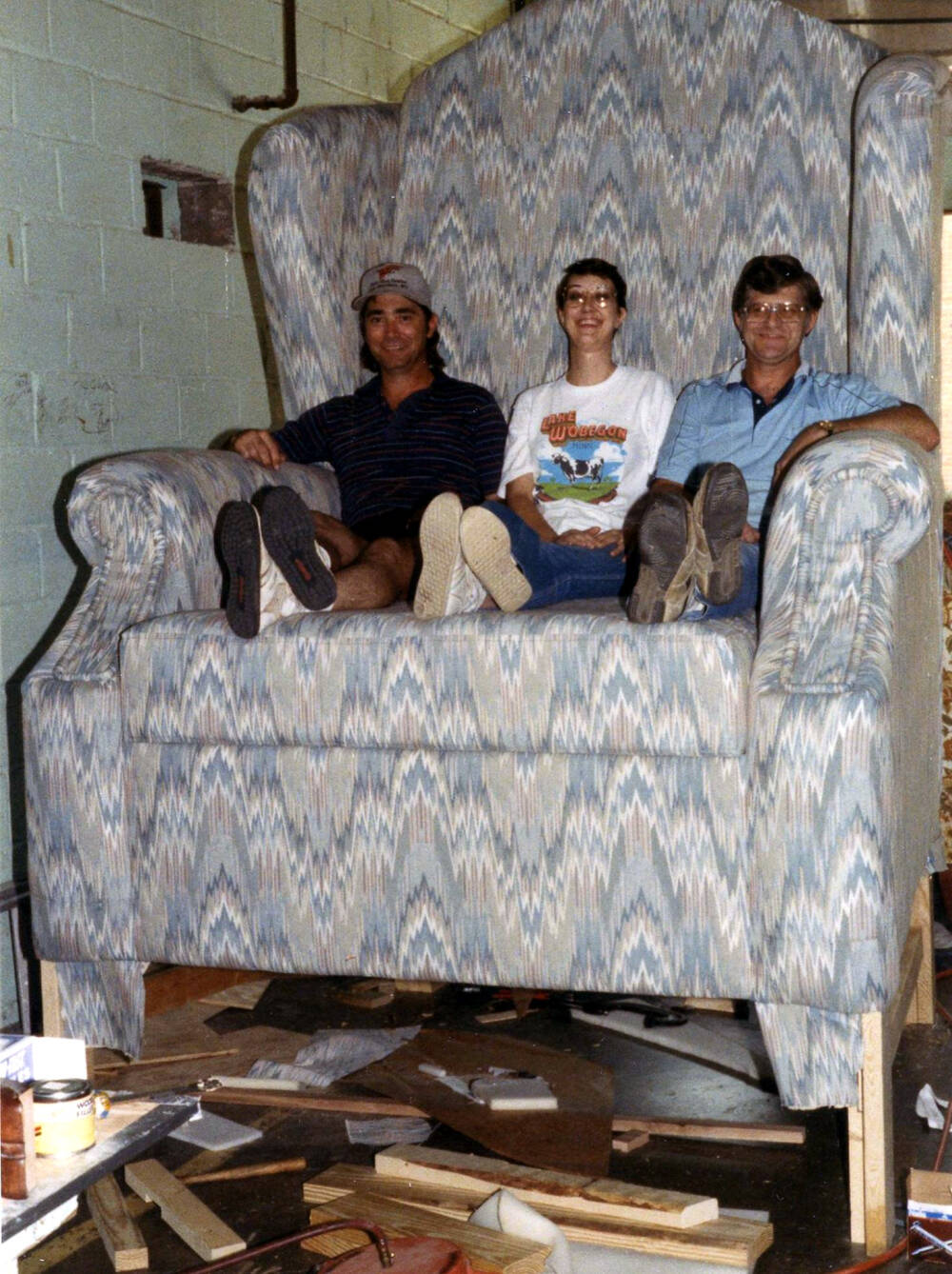 Here she is sitting in the new wing-back, sandwiched between two of her co-workers. She still works for the same family — Tom and Barb Fitzgerald — at Custom Design, a reupholstery shop on Good Hope Street.

Griffaw's completed the new chair by August 1989, and it was moved to its new home at 1739 N. Kingshighway. 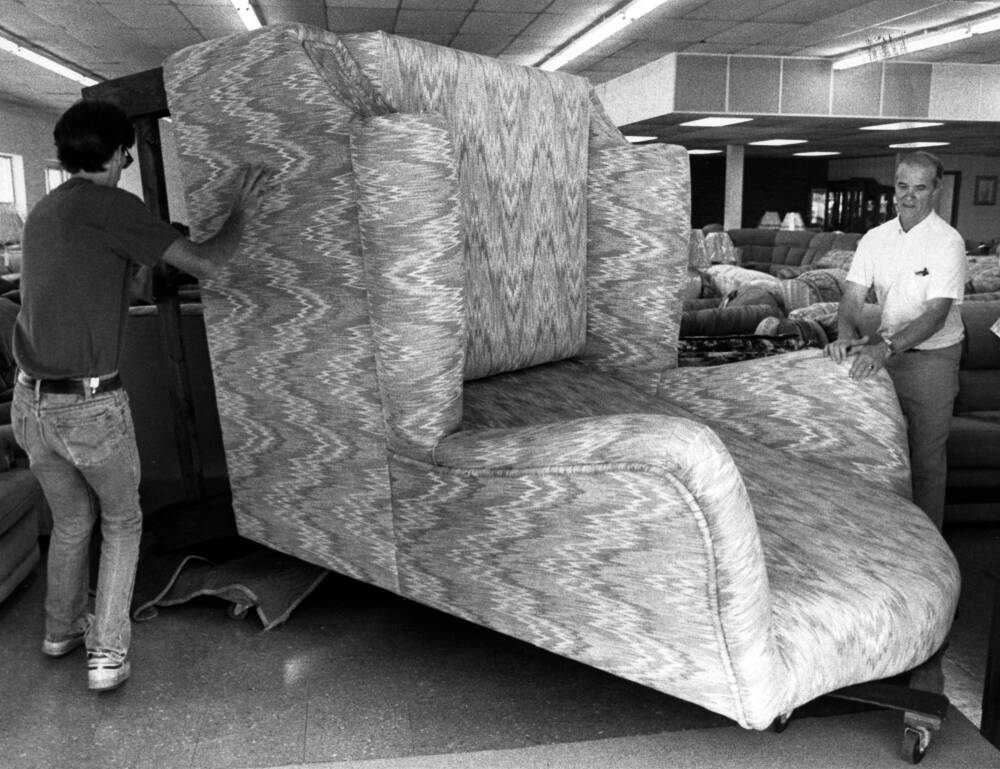 Harold Palmer, left, and his father, Jim Palmer, owner of Uncle Ralph's Furniture, move a 9-foot-tall, wing-back chair into their new location at 1739 N. Kingshighway today. It replaces a slightly smaller chair which was lost June 2 in a fire which destroyed the business at its former location downtown. Griffaw Manufacturing of Cape made the giant chair. (Southeast Missourian archive)