The original clubhouse at the Cape Girardeau Country Club was opened the evening of July 29, 1921, with a formal reception and dance. The building was constructed by Cape Girardeau contractor Will Gerhardt on the highest point on the course. The two-story structure faced east, overlooking the Mississippi River. It was rustic in appearance, with an exterior of stained cypress. Its dimensions were 61 feet by 60 feet, and two verandahs extended the entire frontage of 60 feet, on both the upper and lower floors. The clubhouse was in use until it was destroyed by fire Dec. 11, 1963. (Southeast Missourian archive)

I once told my former editor Sam Blackwell, a proficient golfer, that I would like to try playing golf just once. He smiled wisely and suggested I might want to try it more than once. Well, that was more than a decade ago, and I still haven't picked up a club. But, perhaps, the centennial of the Cape Girardeau Country Club will give me the excuse I need to try my hand.

The earliest mention I have found of the establishment of a golf course in Cape Girardeau was in May 1916. The item in The Daily Republican noted a landscape architect from St. Louis named Henry Wright was in town looking over the St. Vincent's College farm north of the city, with a view to transforming the land into golf links. That dream finally became a reality on April 3, 1921 -- a century ago -- when the first round of golf was played here on temporary greens and tees.

Published Monday, April 4, 1921, in the Southeast Missourian on Page 1:

COUNTRY CLUB MEMBERS OUT TO TRY THEIR NEW COURSE

Temporary "greens" and "tees" in place, a dozen or more members of the Cape Girardeau Country Club, recently organized with a little more than 105 members, were out to try the game.

The first full nine holes of golf to be played was a match by Fred A. Groves and Charles W. Boutin. Their score -- which probably will cause a big laugh 20 years from now -- were

Groves won by virtue of his ability to keep to the fairways and out of the "rough" to a greater extent than his rival, although both at times strayed from the straight-and-narrow.

Robert Lamkin and Norman Hely played a round in the forenoon, but kept no score. Others who played on the opening day were George Steck, Miss Mary Griffith, Bob Beckman, Walter Albert, W.F. Bergmann, Charles Black, Sam Sherman, George Bolz and Charles A. Himmelberger.

Bogey for the course has been set at 40, it was announced today by Fred Groves.

The permanent greens are to be installed later and work on the new club house is soon to start.

This view of the golf links at the Cape Girardeau Country Club, looking east, was taken in the 1920s. (Southeast Missourian archive)

An article in the Southeast Missourian's 50th Anniversary Edition gives more details of the history of golfing in Cape Girardeau.

Golf, as a sport for tired business men and others, had its beginnings in this area during the past half century and has developed much since its beginning 33 years ago. As a consequence of the organization of the Cape Girardeau Country Club on March 1, 1921, the community obtained its first golf course.

Harry L. Albert was a prime mover in the organizational days. He called the first meeting and headed a drive to secure 100 members. The drive reached its goal in eight days after the first meeting. William H. Harrison was elected first president and John P. Myers first secretary.

A sporting goods company sent a course-building expert here to assist in preparing the golf course on land purchased from the Cape Rock Park Association. Workers, with rakes and hoes, labored under the direction of Fred A. Groves, putting the land in shape. On April 3, 1921, they finished setting up temporary greens and tees.

Charles W. Boutin and Mr. Groves played the first match the following day. (Not exactly accurate. The first match was played April 3, 1921, a Sunday. - Sharon) Mr. Groves proved victorious, winning by a score of 69-73. (Again, that score differs from what The Southeast Missourian published in 1921. - Sharon) It was reported at the time that he won by virtue of his ability to keep to the fairways and out of the "rough" more than his opponent. Mr. Groves announced that "bogey" (a score near average) for the course had been set at 40. Par today is 35 and 36.

During the '20s, the number of golfers and also their ability increased.

During this first decade, Charles Cofer made the first hole-in-one on the course. In the later '20s, the Southeast Missouri League was organized, thereby establishing competition between several clubs in this area

In 1934 agitation started for another golf course and in 1935 the Hillcrest Golf Club was organized. On May 12, 1935, the club played its first match in the Southeast Missouri League, losing to Charleston at Charleston, 34-6.

On the following Sunday, May 19, the new nine-hole golf course was formally opened. The course, measuring 2,908 yards, was located on Highway 61, approximately three miles from Cape. Mayor E.L. Drum of Cape participated in opening ceremonies, attended by over 200 people.

In the first match played there, Sikeston defeated a Cape-Jackson team, 40-12. (E.L.) McClintock, Owens and Reitzel were the high scorers for Cape with three points. M.E. Lesem was the first president of the non-profit course. Golf playing on the new course was not limited to club members but was open to the public. During the war years, he club disbanded and the course was turned into farmland.

Today the third course in Cape's golf history is being built under the leadership of the Junior Chamber of Commerce (Jaycees). A financial drive was conducted this year, and the course is now under construction on a site located on the Perryville Road. It is hoped that it may be in shape for play yet this season.

State College added golf to its sports lists in 1936. During the war years and also in recent years, there has been no activity. College golfers participated in numerous meets and also in M.I.A.A. competition.

Several coveted marks have been established in the golf playing in Cape Girardeau. Clyde McDonald and Dave Howard holds the Country Club's record for low score with 29. McDonald shot his low mark in 1950 while Howard scored his last summer. Since the time when Cover made his first hole-in-one, six more have been made.

Jack Knehans holds the distinction of having made one at each of the Cape clubs and furthermore is probably the only golfer to have made a hole-in-one at the Hillcrest Club.

Harry Cole, Carl Meyer and B.I. Howard are the other players to have made the shot at the Country Club. Hoard has sunk two, and Carl Meyer's is the most recent, being made this year. Clyde McDonald has made four during his golfing career, however none was made here.

With the building f the new course with grass greens, with the improved facilities at the Country Club, with increasing interest being shown in the sport, it can surely be said the game of golf has grown and prospered during the last half century.

This is another view of the Cape Girardeau Country Club links taken in the 1920s, this one showing the clubhouse. (Southeast Missourian archive)

Here are a few more items of interest about the Cape Girardeau Country Club. All were culled from the files of the Southeast Missourian.

May 31, 1916: Henry Wright, landscape architect of St. Louis, spent the day in Cape Girardeau looking over St. Vincent's College farm north of the city and several public school grounds with a view of landscaping them; he was ordered to provide plans for country club grounds and golf links on the college farm.

June 7, 1920: About 50 representative business men of Cape Girardeau decided at the Chamber of Commerce rooms to establish a country club; the board of directors of Cape Rock Park Association was instructed to devise ways and means to accomplish this goal; the 107 acres embracing the property bought by the association, to be used for a park, country club or recreation purposes, was really in two parts; Cape Rock was situated in timberland of about 27 acres and could easily be developed into a beautiful, natural park; the balance of the land, which was adjacent to this woodland, was open, with clusters of trees scattered about it.

Aug. 18, 1920: Cape Rock Park Association last night voted to transfer 80 acres of the association's Cape Rock holding to the Cape Girardeau Country Club now being organized; the club, by its tentative bylaws, will have a minimum of 100 members, paying $100 membership fee and annual dues of $50; by terms of the land transfer, the part of the tract to be retained as park by Cape Rock Park Association will be nearly paid for, the Country Club to assume payments for the 80 acres transferred to it.

May 12, 1921: JACKSON -- Articles of agreement and decree of court for incorporation of Cape Girardeau Country Club have been recorded at the recorder's office here; the constitution and by-laws of this club were quite elaborate and covered eight pages of record; it was proposed to erect a fine club house on the grounds, to lay out golf links, tennis courts, etc., and to beautify the grounds; membership was limited to 150 men and 75 women.

July 12, 1921: A meeting of caddies was called by Fred A. Groves, chairman of the greens committee of the Country Club, for instruction in the art of caddying; there were about 70 caddies registered, and about 50 of them were badly deficient in training.

July 29, 1921: The new clubhouse at Cape Girardeau Country Club was opened in evening with a formal reception and dance.

July 1, 1922: Frank Lynch of St. Louis took up his duties as golf instructor at the Cape Girardeau Country Club.

July 4 1931: A new swimming pool at the Country Club was dedicated. A.H. Gerhardt and Son had the general construction contract, while W.H. Meystedt had the plumbing contract and the Electric Supply Co. of Cape Girardeau supplied the electrical equipment. Architect for the pool was A.F. Lindsay.

Aug. 4, 1934: Consideration was being given to constructing grass greens on the Cape Girardeau Country Club golf course; the greens at that time were of sand.

April 22, 1941: Country Club officials moved with a firm hand to put down an insurrection of 15 caddies, who staged a "stand up" strike against new regulations laid down by the club; the 15 were summarily discharged; the new rules provided that a caddy should receive 35 cents per round of nine holes instead of 25 cents, that there should be no tipping, and that caddies were to be given numbers daily and assigned to golfers numerically.

Sept. 16, 1945: Albert M. Spradling, prominent Cape Girardeau attorney, collapsed and died unexpectedly while, in the company of friends, playing a round of golf at the Country Club.

May 13, 1946: Stockholders of the Country Club went on record to make the club's property available to the Veterans Administration, if this location was selected by the government as the site for a proposed $10,000 neuropsychiatric hospital.

March 28, 1962: After not having a professional golfer on hand for years, the Country Club boasted two pros; they were a husband-and-wife team, Fred and Murle Lindstrom.

May 2, 1963: Members of the Country Club, by a straw vote of those present, approved expansion of the course to 18 holes; it was decided to purchase 64 acres of land north of the course.

Dec. 11, 1963: The clubhouse of the Country Club was razed early in the morning by flames, which firemen fought with weak water pressure and low supply; fire destroyed the 42-year-old clubhouse, but spared the nearby golf shop; the blaze was believed to have originated in the boiler room on the north end of the basement. 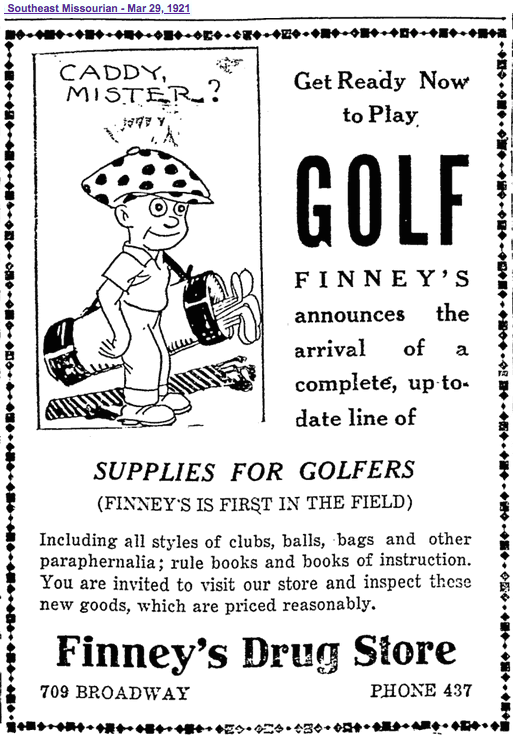