From the archive: Duels satisfied insults in pioneer Missouri

Published March 3, 1989, in the Southeast Missourian: 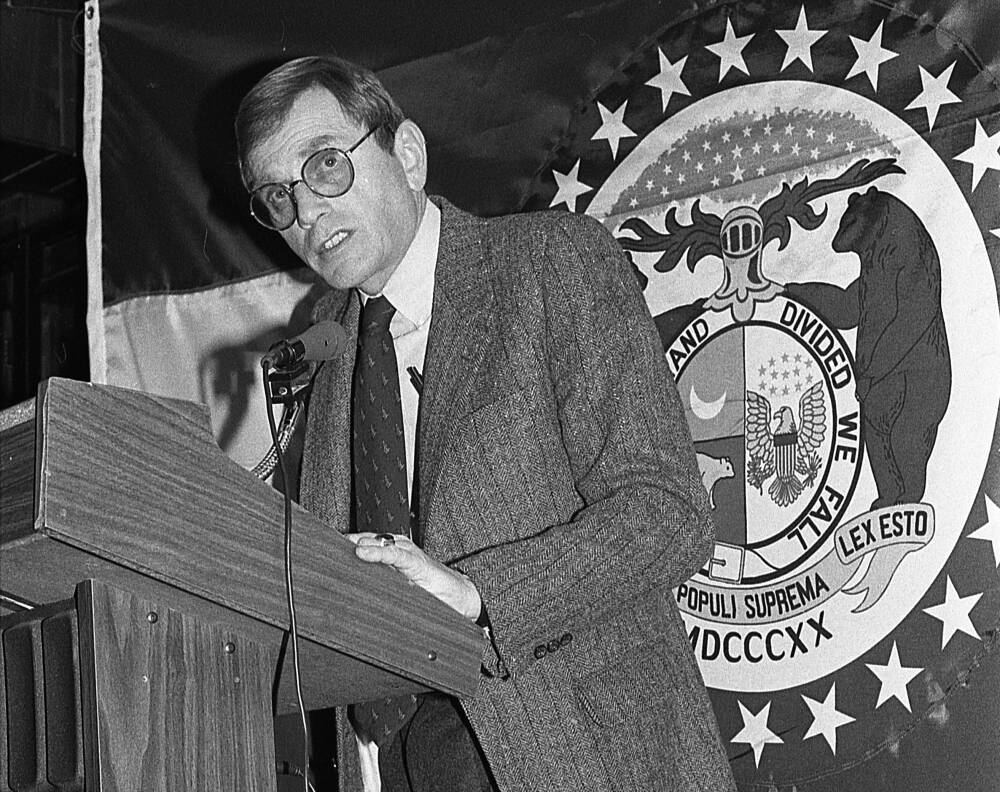 NEW MADRID, Mo. — Today, an insult may cause you to brood for a bit or prompt an angry retort. But in 19th century Missouri, an insult often sparked a duel to the death.

For Missouri's "gentlemen" of the 1800s, dueling was an accepted tradition, a time-honored means of dealing with real or imagined slurs to one's honor.

Even calling someone an "insolent puppy" could spark a deadly confrontation, according to Dr. James W. Goodrich, director of the State Historical Society of Missouri.

The Cape Girardeau area has a prominent niche in the history of dueling in Missouri, with one of the first recorded duels taking place on a nearby island, Goodrich said.

Goodrich discussed dueling in Missouri in a speech before about 100 people at the Rebecca Sharp residence in New Madrid Friday night.

The audience included representatives of historical associations, museums and others simply interested in history, from a seven-county area of Southeast Missouri.

The dinner meeting was hosted by Riley and Jill Bock of New Madrid. Riley Bock is a member of the board of trustees of the state historical society.

"The code duello was a device for determining right or wrong, in terms of honor. And honor was one of the most important personal possessions of certain Missourians during the 1800s," pointed out Goodrich.

"Dueling was an aristocratic institution. And, even though today we are distressed by its apparent and real savageness, if we condemn all of those who participated in its often deadly pursuits, then we categorize a number of prominent Missourians as criminals or fanatics.

"Remember," he added, "that these gentlemen had an exaggerated sense of personal honor."

Quoting historian Louis Houck, Goodrich said that "the fact was overlooked that in such a contest the innocent may fall and the worthless survive."

Goodrich noted that in Missouri, "politicians, lawyers, businessmen and newspaper editors" were principal participants in duels, generally "stepping off" over political affairs and personal grievances.

"One of the first duels to take place in what became known as Missouri occurred on Cyprus Island near Cape Girardeau in 1807," said Goodrich.

The duel was fought between Joseph McFerron and William Ogle.

McFerron was an educated Irishman, who taught school and served as the first clerk of the courts in the Cape Girardeau district.

Ogle, a former revenue collector from Maryland, had settled in 1806 in the Cape area, where he worked as a merchant.

"What actually precipitated the McFerron-Ogle duel remains unknown, except that the two men had disliked each other for some time," noted Goodrich.

Ogle apparently insulted McFerron, struck him in the face, and challenged the Irishman to a duel. Although McFerron had never fired a pistol, he accepted the challenge.

The two men met on the Cyprus Island sandbar; shots were fired. "Ogle fell dead from a ball to the brain; McFerron escaped injury.

"After the duel, the Irishman resigned his clerkship, but public sympathy for his side of the grievance prevailed and McFerron soon was reinstated as the clerk of the courts," Goodrich recounted.

A number of duels took place on a thickly wooded island located midstream in the Mississippi River near St. Louis. In fact, said Goodrich, so many duels took place there that it became known as "Bloody Island."

As early as 1814, there was a territorial law against dueling. In 1822, the Missouri Legislature passed a new law declaring that anyone would be guilty of murder who participated as a principal, second, abettor or counselor in a duel.

In such cases, a person would be ineligible to hold any office, civil or military, in the government of Missouri.

However Goodrich said the law was ineffective as it was not rigidly enforced.

In 1824-25, the Missouri Legislature called for public flogging of any person who engaged in a duel. However, Gov. Frederick Bates vetoed the legislation, contending "it would be in direct conflict with the feelings of the people."

Goodrich said laws against dueling remained on the Missouri books until 1977.

Benton was involved in one fatal duel. He was the chief adviser in another duel in which both principals died, and served as a second in a duel.

"He defended duelists in court, published a defense of dueling and became a noted historian of duels," said Goodrich.

"When he arrive din Missouri in 1815, a North Carolina-born, hot-blooded, tempestuous, politically ambitious lawyer/legislator from Tennessee, Benton already had been embroiled in a family imbroglio centering around a duel," Goodrich said.

The duel had involved Benton's younger brother, Jesse, and a friend of Andrew Jackson.

In the duel, Jesse had become so unnerved after firing the first shot and missing, and having to wait for the other man to fire a pistol, that he turned around just as the other gun was discharged. He was struck in the back.

The incident enraged Thomas Hart Benton, who feuded with Jackson, the "Battle of New Orleans" general who later became president.

The two men and their cohorts later fired pistols at each other at a tavern, with Benton wounding Jackson in the arm.

Missouri's most famous duel involved Benton and Charles Lucas, then the U.S. attorney of Missouri.

During the territorial election on Aug. 4, 1817, Lucas asked Benton if he had paid the tax which entitled him to vote.

Benton reportedly responded he would not answer "charges made by any puppy who may happen to run across my path."

According to Goodrich, some reports claim that Benton called Lucas an "insolent puppy."

The two lawyers were on opposite sides in a trial, and a resulting argument over the evidence in the case helped lead to the duel, Goodrich said.

However, the "puppy slur" was the incident which actually led to the duel, Goodrich said.

Pistols were drawn at 30 feet. Both men wounded each other, with Benton demanding another duel as soon as Lucas had recovered from his wound.

On Sept. 27, a second duel took place, with the two men standing 10 feet apart. In the duel, Lucas was mortally wounded, and died within an hour.

Before dying, Lucas told Benton that he forgave him and offered his hand to Benton.

Benton subsequently brooded about the duel. He destroyed all his papers pertaining to the event and never again walked onto a "field of honor."

Many prominent Americans were involved in duels, including Alexander Hamilton, Aaron Burr and Davy Crockett.

"Perhaps the acerbic Mark Twain had the best idea about demanding satisfaction on a field of honor," noted Goodrich.

Said the author, "I thoroughly disapprove of duels. If a man should challenge me, I would take him kindly and forgivingly by the hand and lead him to quiet place and kill him."

The story of the Ogle-McFerron duel has taken up a lot of space on the pages of the Southeast Missourian over the years. I know of no first-hand account, but a letter written by Elizabeth Ellis to her father, Capt. William Beckman, in Georgia a half-year after the event is as close as I can get. This copy of the letter comes from a story written by former Missourian editor Allan Hinchey in the Dec. 4, 1921, edition of the St. Louis Star:

Recently, among some old letters and records, the writer found a letter from Mrs. Elizabeth Ellis of Cape Girardeau, written to her father, Capt. William Beckman, in Georgia, giving an account of the duel, in which three shots were fired, McFerron being wounded in the first round, while Ogle was killed in the third exchange of bullets.

Mrs. Ellis, under date of March 29, 1807, writes her father as follows: "I expect before you get this you will have been told we have lost our best friend, Capt. William Ogle, a friend, indeed. He was like a brother to me.

"He caused his own death by fighting a duel. I will also inform you what caused him to fight: He and the clerk of the court and one or two other gentlemen were talking about one Mr. Sample, a Presbyterian preacher, who now lives near Pittsburgh, on the Ohio River.

"It was reported that the preacher had taken away another man's wife, and the clerk of the court, whose name is Joseph McFerron, came from Pittsburgh about two years ago. Capt. Ogle asked him if he was acquainted with the preacher. He said that he was and that the report was true, respecting his taking away another man's wife, and he began to abuse him very much and said this was not the first man's wife he had been too friendly with.

"Capt. Ogle then said the Rev. Mr. Sample was an old friend of Mrs. Ogle, and he believed she had a high opinion of him, for she had always spoken very much in his favor. And Ogle said the preacher had been at his house several times and always behaved there like a gentleman.

"Then Mr. McFerron hinted as much as if he thought the preacher had been too friendly with Mrs. Ogle, too, as it was a common thing with him. And from that it got worse, and Sunday (8th ultimo), McFerron sent Capt. Ogle a challenge. He accepted it and in the morning they and their seconds crossed the river for the purpose of fighting.

"The first shot, Capt Ogle wounded Mr. McFerron through the thick part of his thigh. The second shot nothing done. Then Mr. McFerron offered to beg pardon and the seconds left them to themselves.

"But it was not long before Capt. Ogle called for the pistols to be loaded again. The seconds tried to get him to quit, but he said that one or the other must fall before they left the ground.

"The pistols were then loaded and before the word was given, Mr. McFerron shot and the ball struck Capt. Ogle, inflicting a deadly wound from which he died."

This letter of Mrs. Ellis to her father probably is the only written report of the affair, although others have reported that hard feelings had existed between the two men for several months. It also was said that McFerron wanted to resign his office as clerk of the court because the friends of Ogle accused him of firing the fatal shot before the word was given. But his friends stood by and denied the report, so he continued in office until his death...