From the archive: The games people played

These are just a few of the toys we played with when I was a kid.

This Southeast Missourian article from Sept. 11, 1994, takes a look at the games children played in an earlier generation. 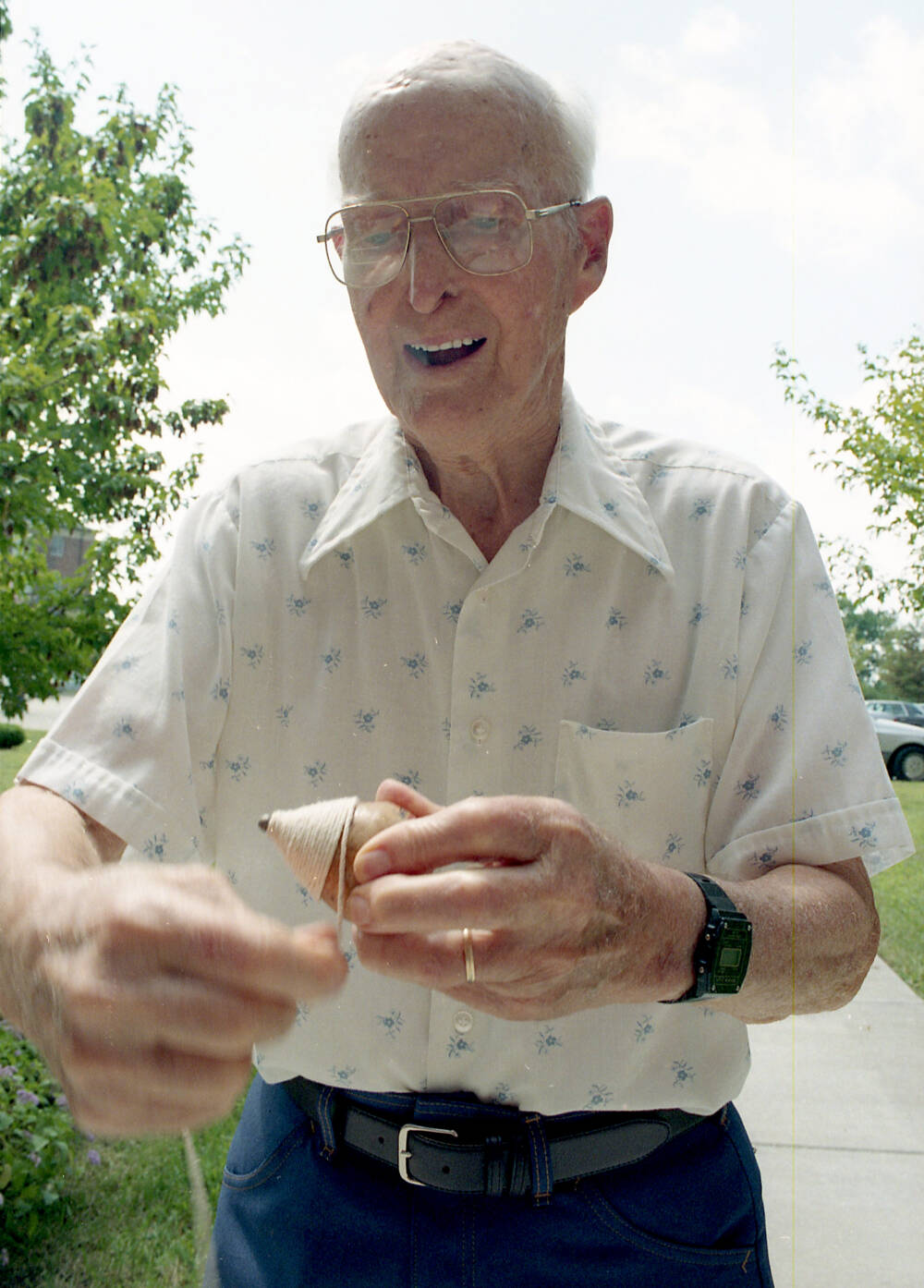 Charles Rauch wound string around an old-fashioned top he has had since he was a child. (Lou Peukert ~ Southeast Missourian archive)

Ingenuity was paramount. Most toys weren't store bought. They were homemade. Youngsters played baseball with a broom handle and bottle caps.

Clarence Smith, 87, who grew up in Illinois 50 miles east of St. Louis, remembers making his own jacks by stringing corn into little rings.

"We made our own entertainment," recalled Smith, who today makes his home in Chateau Girardeau.

He and several other Chateau Girardeau residents recently reminisced about the games they played.

Charles Rauch, 85, grew up in Morehouse. "We played marbles." Players shot with a taw. "That was your big marble."

Rauch inherited about 15 to 20 of the old quartz marbles from his father. "If you bruise them, it makes a moon in them."

Rauch also flew kites. "I always made my own kites." All it took was a little string, newspaper and some sticks.

He also spent time spinning wooden tops. He still has some wooden tops. With a quick tug on the string, he recently sent one spinning onto the Chateau Girardeau sidewalk, prompting smiles from fellow residents like Dot Seibert, 87.

"I'll tell you it's not that easy," said Seibert, admiring Smith's skill. 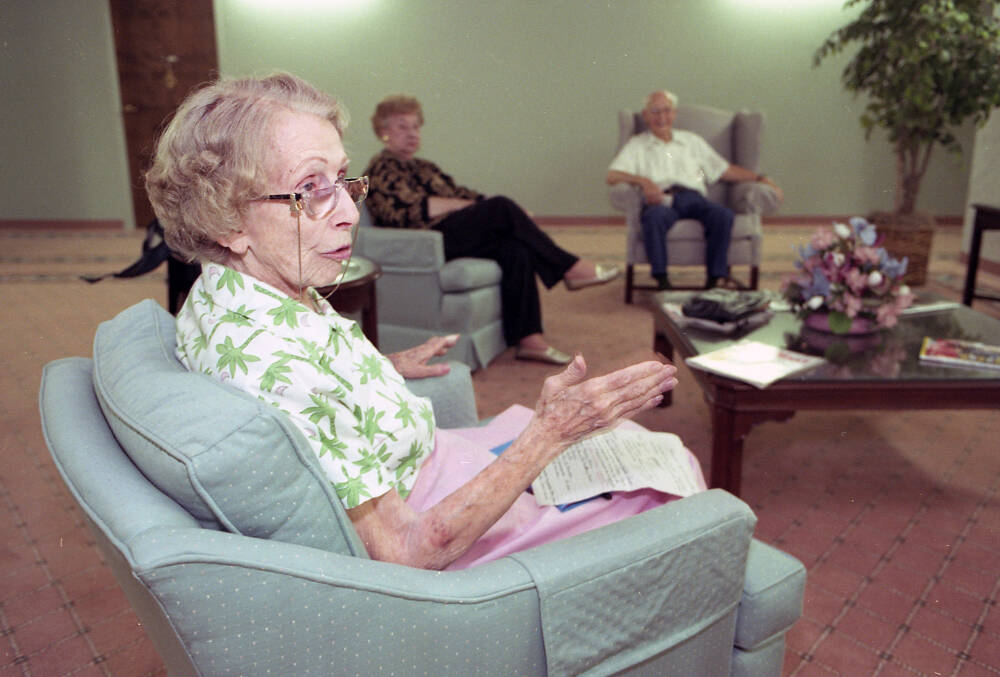 Dot Seibert told of games she played as a child while growing up in St. Louis. (Lou Peukert ~ Southeast Missourian archive)

Seibert remembers playing street hockey with the other children on the streets of her St. Louis neighborhood. A crushed can served as a hockey puck. Part of a broom handle, outfitted with a piece of rubber hose on the end, served as a hockey stick.

Singing games like "London Bridge" and "Here We Go 'Round the Mulberry Bush" were popular pastimes.

Pogo sticks were also fun, although Seibert recalls her mother didn't want her to bounce around on one.

When Seibert was growing up, homemade stilts were popular. "That was fun for Halloween," she said.

Empty milk bottles made for a great game of "spin the bottle." A player would spin the bottle and when it stopped, "you got to kiss the girl or guy opposite you," explained Seibert.

Like other children, she enjoyed jumping rope. "Double Dutch was hard."

Blind man's bluff, a variation on the old tag game, was also a favorite when Seibert was growing up.

Rauch played cowboys and Indians. A bamboo stem made a perfect "pea shooter."

"That was all papa would let us play," said Mary Rauch. "Card games were a sin."

Hopscotch was a big game in her neighborhood, the numbers drawn in chalk on the sidewalk.

Seibert also played the game. A broken plaster of Paris statue provided Seibert and her childhood friends with the marking material to turn sidewalks into hopscotch when there wasn't any chalk available.

Ken Carter, 87, grew up in St. Louis playing "tippy." A short piece of wood with pointed ends was placed on the ground. A player would strike the object with a wooden paddle, causing it to bounce up. While it was in the air, the player would attempt to hit it like a baseball player would a pitched ball.

People played checkers, as well as a game called caroms.

Caroms was played on a square board, which had four cloth, web pockets, one in each corner. Players attempted to get wooden rings into the pockets in a game somewhat similar to pool.

Today, such games are largely memories. "My granddaughter couldn't imagine what we did without a television," said Mary Rauch.

But for Mary Rauch and the others of her pre-TV generation, the games of old were loads of fun. And nothing compared to a good game of hopscotch. 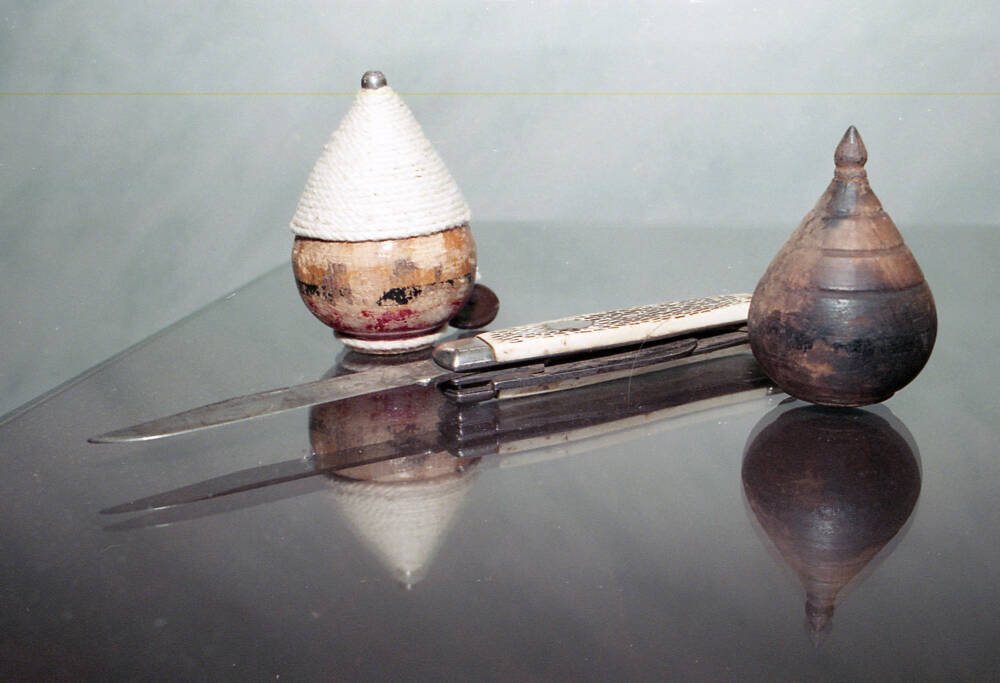 Pocket knives were used to play a game called mumble peg, and tops were dropped while spinning in an attempt to knock over other spinning tops. (Lou Peukert ~ Southeast Missourian archive)