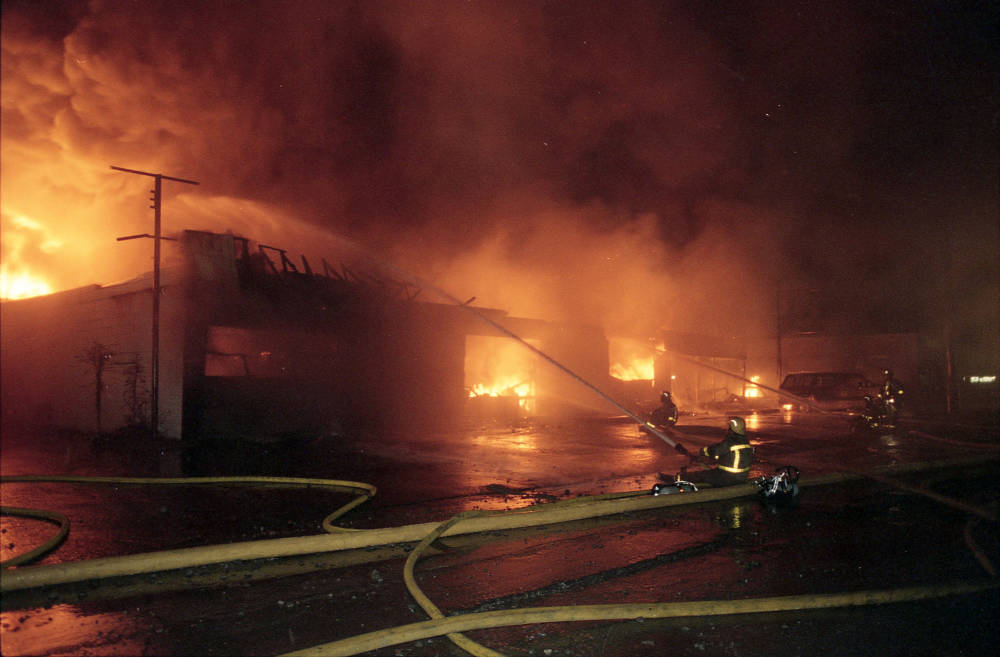 Despite the damage to his building complex at 2301 William, Vernon "Pee Wee" Rhodes said Plaza Tire will be open for business this morning.

"This won't affect us too bad," he said. "We'll conduct business as usual."

Rhodes was surveying the damage to the Plaza Tire building Sunday morning. Rhodes, the founder of the 32-year-old business, also was providing information about the building and its contents to fire investigators who also were on the scene near the intersection of William and Kingshighway.

Meanwhile, fire crews remained at the site Sunday morning to extinguish hot spots in the smoldering ruins of a Cape Girardeau business.

About 10,000 square feet of the 40,000-square-foot complex was destroyed in the blaze, including the building that housed Lanter Company, a courier.

Much of the complex that wasn't burned, had water damage. A cleaning crew worked much of Sunday to rid the buildings of water.

Rhodes said at least 6,000 tires were in the section of the complex that burned. He said 2,000 of the tires were truck tires and the remaining were high-performance tires.

Rhodes also said a farm tractor and a 1934 Franklin automobile were inside the building when it caught fire. Four new lifters also were in the building, he said. 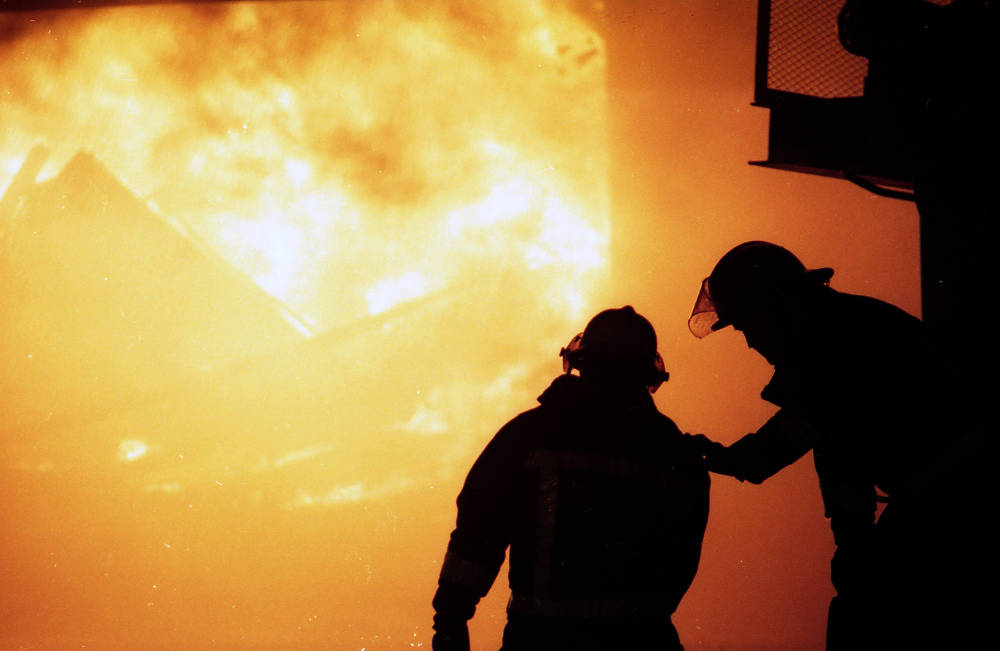 Firefighters from across the region arrived to battle a blaze engulfing the Lanter Company and part of Plaza Tire at the intersection of Williams and Kingshighway Saturday night. The fire began around 9:00 Saturday night and continued through Sunday morning. (Chris Stanfield ~ Southeast Missourian archive)

Two Lanter Company vehicles were destroyed in the fire and a third was damaged. The section of the complex the company leased at 226 Linda was burned to the ground.

The manager of the courier company, Richard Welker, was uncertain Sunday what all was in the building when it went up in flames.

"We'll still be up and running Monday morning," he said.

Welker said he was preparing to sign another two-year lease on the structure. On Friday, he discussed the lease with Rhodes over a cup of coffee.

"I guess I won't be doing that after all," Welker said.

Investigators from the state fire marshal's office, the Cape Girardeau Fire Department and the federal bureau of Alcohol, Tobacco and Firearms sifted through the burned-out rubble Sunday morning trying to determine the cause of the blaze.

"I can't say much at this time," said Bruce Thurlo of the state fire marshal's office. "There's still a lot of work to be done here."

Thurlo said there would be a lengthy investigation. He said Sunday investigators don't suspect foul play.

"We had about 100 firefighters and 15 apparatus," said Chief Robert Ridgeway of the Cape Girardeau Fire Department.

No bystanders were injured in the blaze, but one firefighter suffered a broken hip and leg when a burning wall collapsed.

Three other Cape Girardeau firefighters also were transported to the hospital suffering from smoke inhalation and strain. They were released early Sunday morning.

Investigators said a cause might take weeks to determine.

They were busy Sunday interviewing owners and employees of the businesses, sketching diagrams of the damage and taking pictures of the rubble. 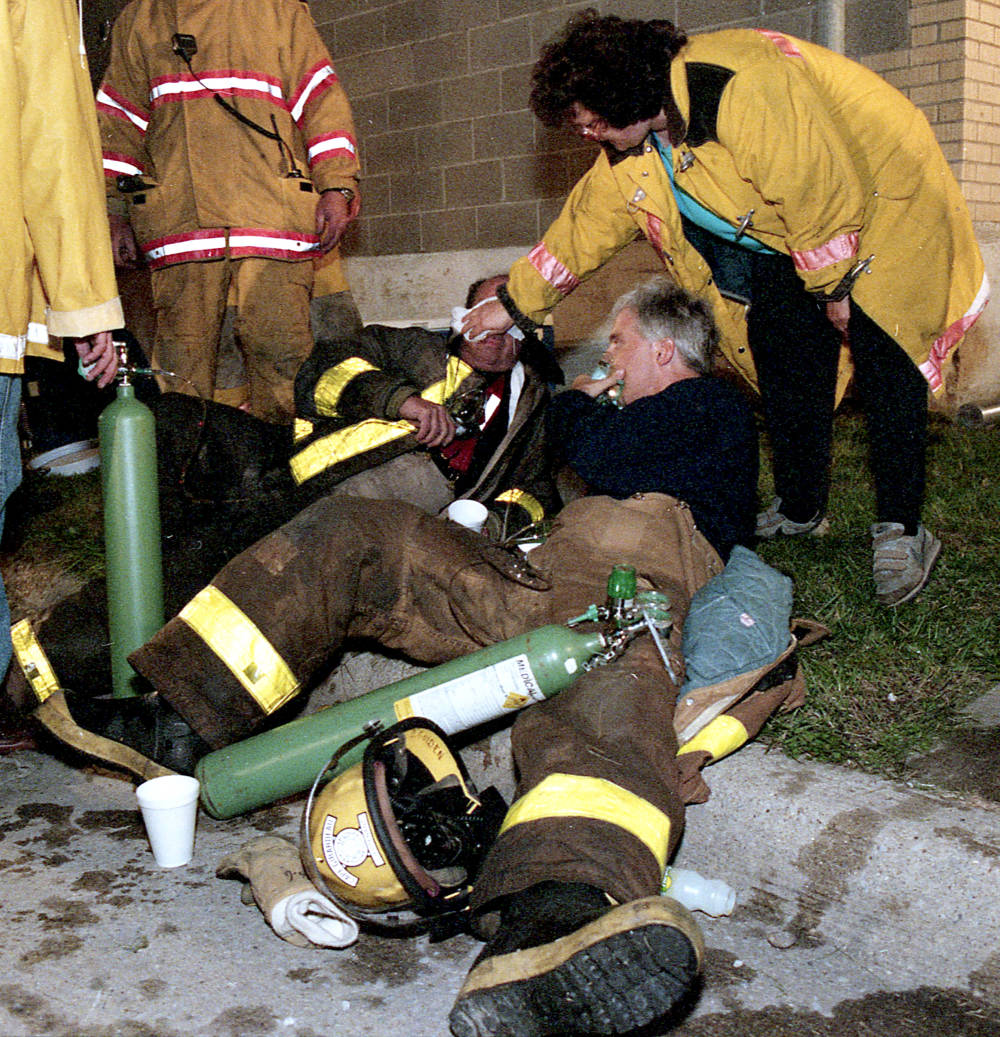 A Cape Girardeau firefighter was in serious condition Sunday night at Southeast Missouri Hospital after suffering a compound fracture in his upper leg and a fractured hip Saturday night.

Randol Morris, 39, was injured while he battled the blaze near the intersection of Kingshighway and William at Lanter Company and Plaza Tire.

A burning wall collapsed on Morris and narrowly missed another man, a firefighter said Saturday night.

Morris underwent surgery to repair his fractures Sunday morning. He was recovering in the Intensive Care Unit Sunday night.

Three other Cape Girardeau firefighters also were transported to the hospital Saturday night. They suffered from smoke inhalation and strain. The firemen were released from the emergency room by early Sunday morning.

The blaze at Plaza Tire was feeding off at least 6,000 tires inside the complex. The burning tires created a thick, black smoke which posed a danger to fire crews.

Local officials at the fire Saturday night couldn't recall a blaze causing as much commotion.

The intersection of William and Kingshighway was partially blocked most of Saturday night and early Sunday morning. Traffic lanes also were closed causing a traffic bottleneck.

Traffic was diverted from the area to allow firefighting vehicles to get in and out of the area.

Ridgeway said 100 firefighters were battling the blaze at one time Saturday night.

Some firefighters did take advantage of the county air van. The van provided oxygen to personnel who sought a break from fighting the fire. 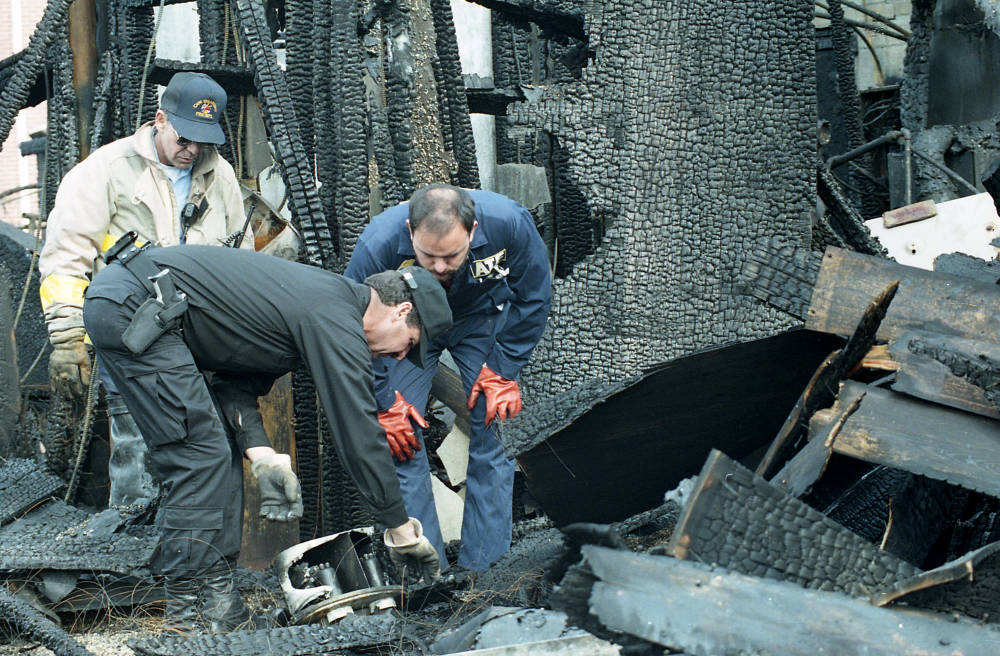 Representatives of the Cape Girardeau Fire Department, the state marshal's office and Federal Alcohol Tobacco and Firearms all worked to find the cause of the fire that damaged Plaza Tire and Lanter Company near the intersection of Kingshighway and William Street. (Southeast Missourian archive)