Twenty-five years ago, the grave of the only known Revolutionary War soldier buried in Old Lorimier Cemetery in Cape Girardeau was marked with a new military stone thanks to the efforts of former city sextant Terrell Weaver and the Sons of the American Revolution.

Uriah Brock enlisted in the Virginia Continental Line in 1776 for the duration of the war. Because he was too small to handle a musket, he served as a fifer.

Brock moved his family to Missouri in the early 1800s. Pension records have him living with a son, Hartwell, in Scott County for a time, as well as in Hubble Township near Jackson. The old veteran died in Cape Girardeau, according to Brock family tradition, in the house in which I now reside in downtown Cape Girardeau. Hence, my interest in this patriot as well as my own family's Revolutionary War ancestors. 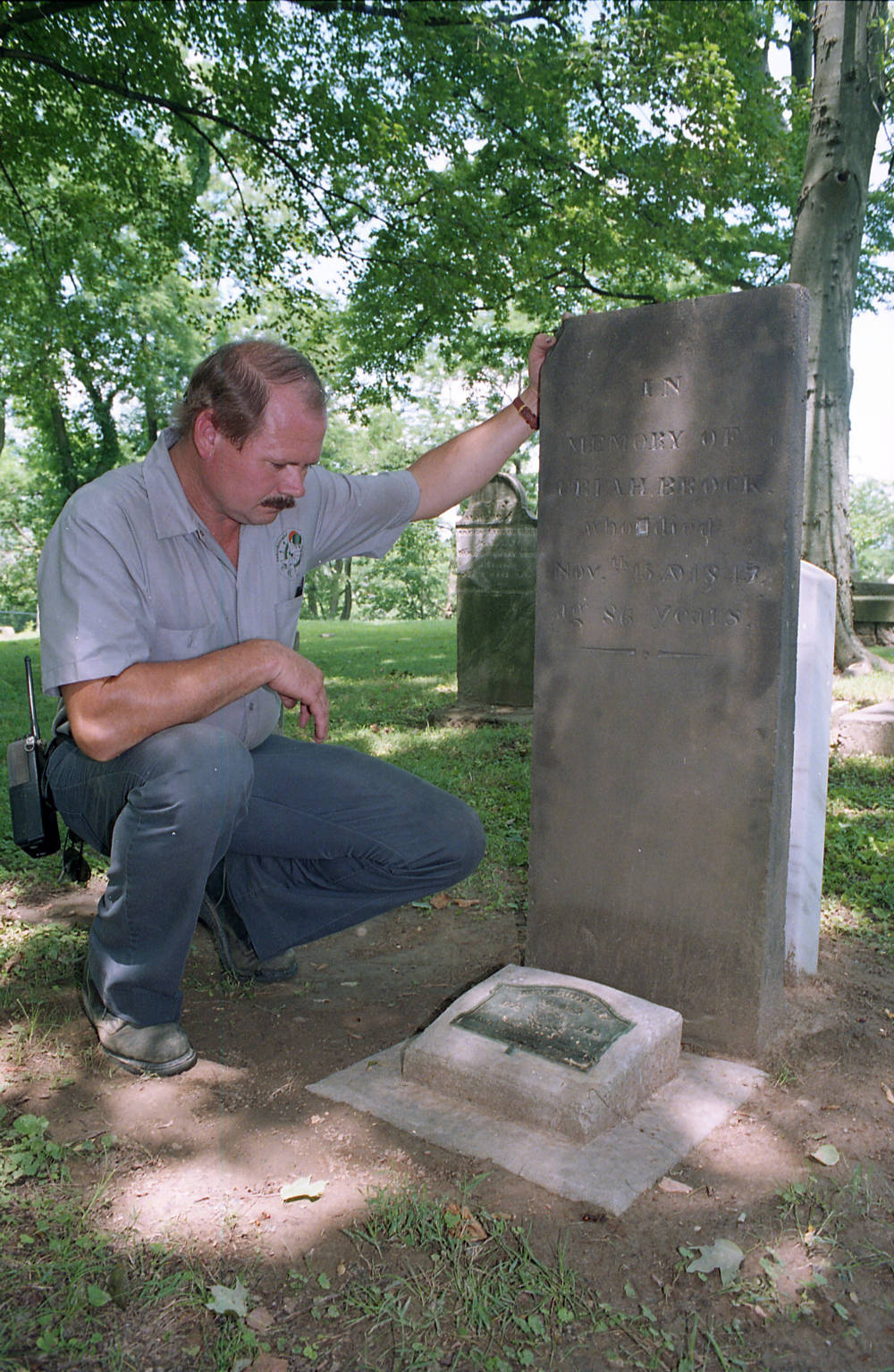 By MARK BLISS
Cape Girardeau cemetery sexton Terrell Weaver figured Revolutionary War soldier Uriah Brock's tombstone had long since disappeared from Old Lorimier Cemetery, carted off or toppled by vandals.
But thanks to some school children, he has rediscovered the tombstone, which had been standing in obscurity at the cemetery grave site for at least a decade.
Weaver said he spotted Brock's tombstone last March or early April, a few days after a group of L.J. Schultz Elementary School students had visited Old Lorimier.
"They were over here doing some genealogy work," recalled Weaver, as he walked through the cemetery Tuesday.
The students cleaned some of the stone markers so they could make rubbings of the names and inscriptions. Brock's plain headstone just happened to be one of the stones they cleaned, Weaver said.
In addition to the old monument -- which recently was placed upright -- there's a new, white marble marker at the grave site, thanks to the efforts of Wendell Miller, president of the local chapter of the Sons of the American Revolution.
The military tombstone, which was erected about two weeks ago alongside the existing monument, will be dedicated in a 6 p.m. ceremony Friday.
Brock is the only Revolutionary War soldier known to be buried in Old Lorimier Cemetery.
Brock fought with the First Virginia Regiment. "He was apparently too small to carry a rifle, so they made him a fifer," said Miller. "He was 16 when he went to war."
He later moved to Cape Girardeau. He died in 1845 at the age of 86.
The original marker faces west, one of a very few Old Lorimier Cemetery tombstones that face that direction, said Weaver. Most of the stones face east, as does the new marker.
Weaver said a Daughters of the American Revolution bronze emblem honoring Brock also was moved from another spot in the cemetery to the rediscovered grave site.
For some years the emblem, which originally was mounted on a metal rod, stood about 150 feet west of Brock's grave.
In the late 1980s, after the metal marker fell to the ground, it was embedded flat in concrete.
Weaver, who began his cemetery duties in 1984, assumed the metal emblem marked Brock's grave.
So did Miller, who thought it would be nice for the soldier to have a headstone.
The government provides headstones for documented military veterans' graves, he explained.
"So I ordered one and got it about a month ago," said Miller. "It was shipped by truck. It ended up at my house. It was lying in my driveway for about a week."
Weaver said it's just as well that Miller ordered the new stone, because the old headstone has a crack running through it. "In time, it is going to bust."
Weaver said the headstone recently was coated with a water sealer in an effort to better preserve it.
He said the DAR marker apparently ended up in the wrong location as the result of vandalism.
At the height of America's bicentennial in 1976, a Southeast Missourian newspaper photograph shows the marker situated beside the old headstone, not some distance away as was later the case.
Miller said he's surprised the old headstone stood undetected in recent years. "You would think somebody would discover it, but no one did."
Covered with lichen and darkened brown from age, the rectangular, sandstone marker stood for years virtually unnoticed on the east side of the hilltop cemetery.
The lichen made it difficult to make out the name, said Weaver, who had walked through the old cemetery countless times, never once spotting Brock's grave.
Unlike the new monument, the old headstone makes no mention of the war, just the date of his death and his age. The word age is spelled "ag" on the stone.
Weaver said it's not unusual to see misspelled words on old tombstones, which were generally made by local carvers. Brock's stone was probably quarried out of the hillside that borders Old Lorimier Cemetery, Weaver said.

Just in time for Independence Day, the Sons of the American Revolution dedicated a new, gleaming white military stone at Brock's grave on July 1, 1994. 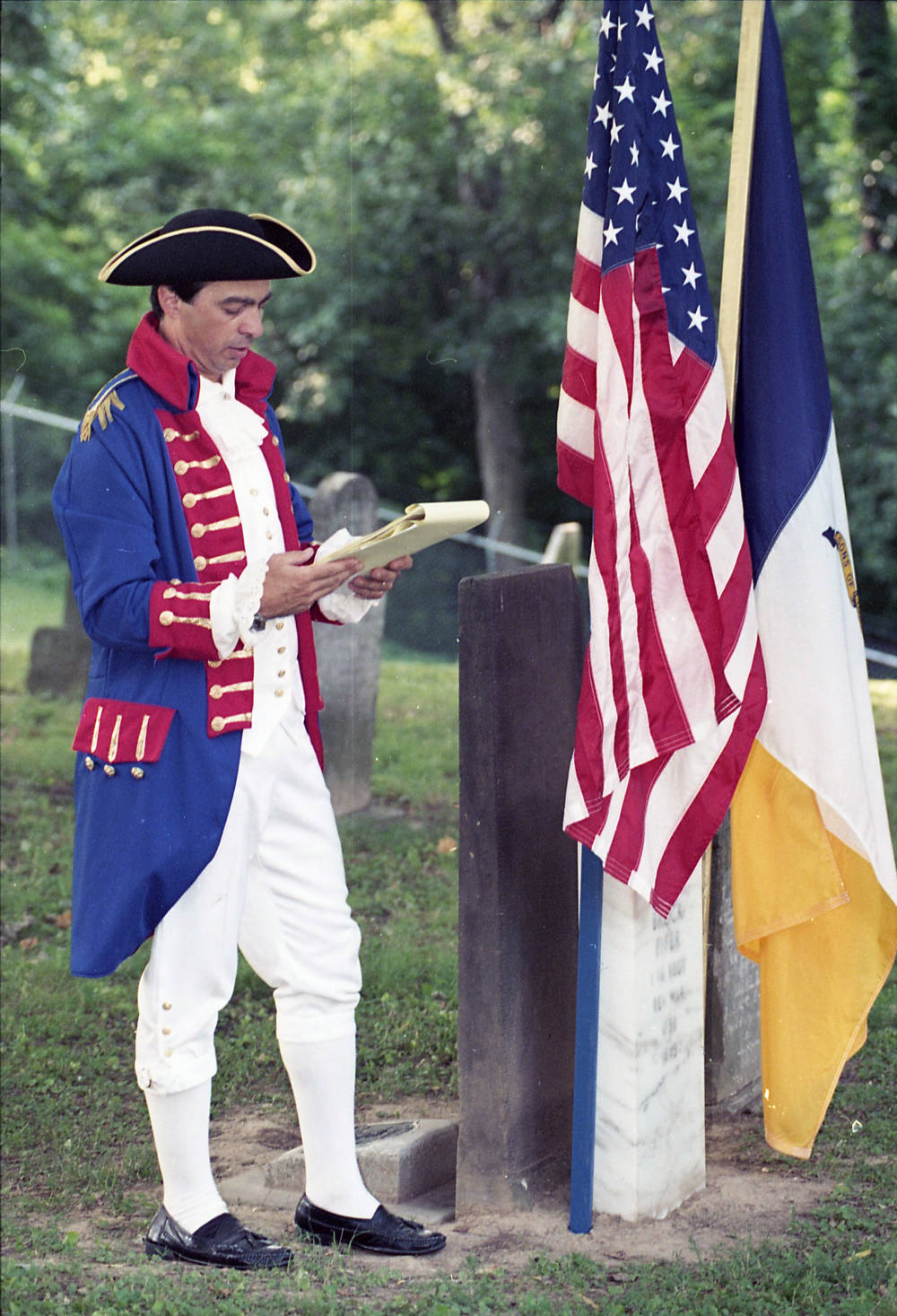 Wendell Miller, member of the Sons of the American Revolution, reads the history of Uriah Brock Fifer at Lorimier Cemetery on Friday. Fifer was a soldier in the 1st Virginia Regiment during the Revolutionary War. (Southeast Missourian archive)

This photograph clearly shows all three markers that now identify the final resting place of Brock. A small, bronze marker set in concrete near Miller's foot was placed by the Daughters of the American Revolution. The dark stone in the center is the original grave marker from 1845, facing west. And the white marker at right is a military stone, courtesy of the SAR. It faces east, as do most of the other stones at Old Lorimier Cemetery.

With three markers at the grave site, here's hoping Uriah Brock's burial place -- and his memory -- are never "misplaced" again.