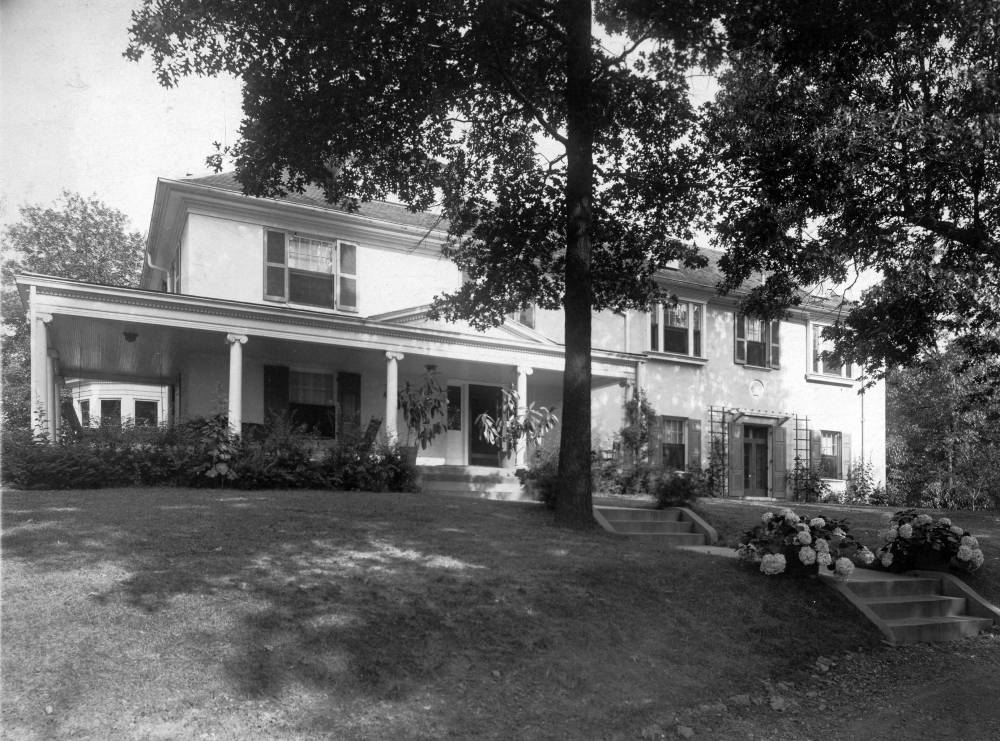 This photograph of Oakenwold was made prior to the devastating fire that gutted the residence in the spring of 1929. (Southeast Missourian archive)

Like a phoenix -- that mythical bird said to rise from its own ashes for a new life -- Oakenwold, the country home of the Peironnet family was gutted by fire in May 1929, only to be restored to its former glory shortly thereafter.

Oakenwold was built around 1902 on Big Bend Road atop a hill overlooking the Mississippi River by Mr. and Mrs. H.P. Peironnet. Harlan P. Peironnet, former mayor of Cape Girardeau and longtime merchant here, enjoyed the house only about a decade. He died in 1912 at the age of 60. His widow, Julia Moon Peironnet, succumbed in 1951, 10 days short of her 96th birthday.

The site of the house is one of the highest in Cape Girardeau. In 1923, when Charles W. Boutin began construction of his home in the 1100 block of Woodlawn, the Missourian carried a description of the future home and its location, comparing its altitude to that of Oakenwold: "Surveys recently made showed that the home of Charles W. Boutin, work on which was started today, will occupy one of the highest points in Cape Girardeau. The site has an altitude 30 feet higher than that of the H.L. Albert home, Oakenwold, north of the city. Boutin's ground floor will be even with the roof of the Albert home." (Harry L. Albert was married to Harlan and Julia Peironnet's daughter, Charlotte.)

The conflagration that destroyed Oakenwold made the front page of the Southeast Missourian on May 8, 1929.

PEIRONNET COUNTRY HOME IN GIRARDEAU DESTROYED BY FIRE; LOSS IS $40,000

Fire, originating in a basement room, almost completely destroyed Oakenwold, the palatial country residence of Mrs. Julia M. Peironnet in North Cape Girardeau on the Bend Road today. Damage to the building, which was virtually ruined, and to the furnishings, some of them of great value, is expected to exceed $40,000.

Although the property is within the extended city limits, firemen were forced to run hose lines more than one-quarter of a mile to reach the place and by the time water was brought to play on the building the first and second floors were blazing.

Flames swept through the entire building, butting the interior of all of it except the north wing which escaped severe damage but for a large hole in the roof. Household furnishings in this section, however, were heavily damaged by water.

Furnishings, valuable paintings and family heirlooms, some of them decades old, were either burned or damaged. Included in the prized possessions in the building were pieces of furniture which had been in the family for years and numerous articles of great intrinsic value gathered by the family while on European tours.

A high wind raged throughout the forenoon whipping the flames over the building, which was of brick, frame and stucco construction. Starting in the basement the flames spread rapidly to the 16 rooms of the residence.

The fire was discovered shortly after 8 a.m. by Lorene Ackman, who reported it to R.I. Young, caretaker on the estate. Young attempted to enter the basement, but was forced back by the dense cloud of smoke filling the ground floor.

Mrs. Peironnet, Mrs. (Charlotte) Zimmermann, wife of Dr. C.A.W. Zimmermann, who reside at Oakenwold, and Miss Ackman were in the house when the fire was discovered.

As soon as the alarm was spread several hundred persons gathered on the sloping grounds on either side of the mansion and scores aided in the attempt to rescue valuables from the burning building. Furniture and rugs were carried out from the first floor and much furniture was thrown from the second floor windows, most of it damaged in the fall.

The flames were halted as the fire entered the north wing of the building, where many of the valuables were stored. The roof of this portion of the building burned and the remainder was water-soaked and damaged and is almost a total loss. Many articles of clothing and other articles were recovered from this portion of the structure. For more than three hours members of the fire department and volunteers battled the flames. Creeping up between the walls and the huge chimney in the center of the main portion of the residence, every section of the structure was penetrated by the fire.

The Peironnet home was one of the most beautiful in this section of Missouri, and the most pretentious in Cape Girardeau. The main portion of the building was erected in 1902, the north wing being added in 1914. Resting on a high hill its elevation was higher than that of any Cape Girardeau building, a sweeping view of the Mississippi and the city being possible.

The residence for many years has been one of the showplaces of the city and has been the scene of many social events. It had a large living room which was in the nature of a ballroom, while the other rooms were extremely spacious.

It was tastefully furnished, with period furniture in many of the rooms, making a striking setting for the natural beauty of the building itself. Giant oaks nearby and on he sloping hills added impressiveness to it.

Mrs. Peironnet, who together with Dr. and Mrs. Zimmermann, after the fire, went to the home of Mr. and Mrs. G.L. Meyer, 430 Marie St., said she was unable to say now the amount of insurance she had to cover the loss.

The following month, the Peironnet family announced the house's restoration.

Oakenwold, perhaps Cape Girardeau's most distinctive residence site, will again be a place of rare domestic beauty. The stately old building, badly damaged several weeks ago by fire, is being rebuilt on original lines so as to conserve the individuality it maintained for many years.

Work on the structure is progressing under the direction of Herman Pape, contractor, and Mrs. H.P. Peironnet, owner, has assured Girardeans that the residence will retain its former colorful appearance and have the added attractiveness of modern design. Restoration of the huge structure has been carefully worked out by Reither and Lindsay, local architects, and the grounds will be maintained as in the past.

Restoration of the structure will include a large reception room and ornamental stairway leading to the second floor. A spacious tiled sunroom will be an added feature, and an attractive dining room will open into a conservatory. Servants' quarters and a number of baths are included in the new plans of the dwelling.

The building should be ready for occupancy within a few months and Girardeans and visitors will again have the pleasure of admiring the beauty of one of the most beautiful fine homes in this section of the state. 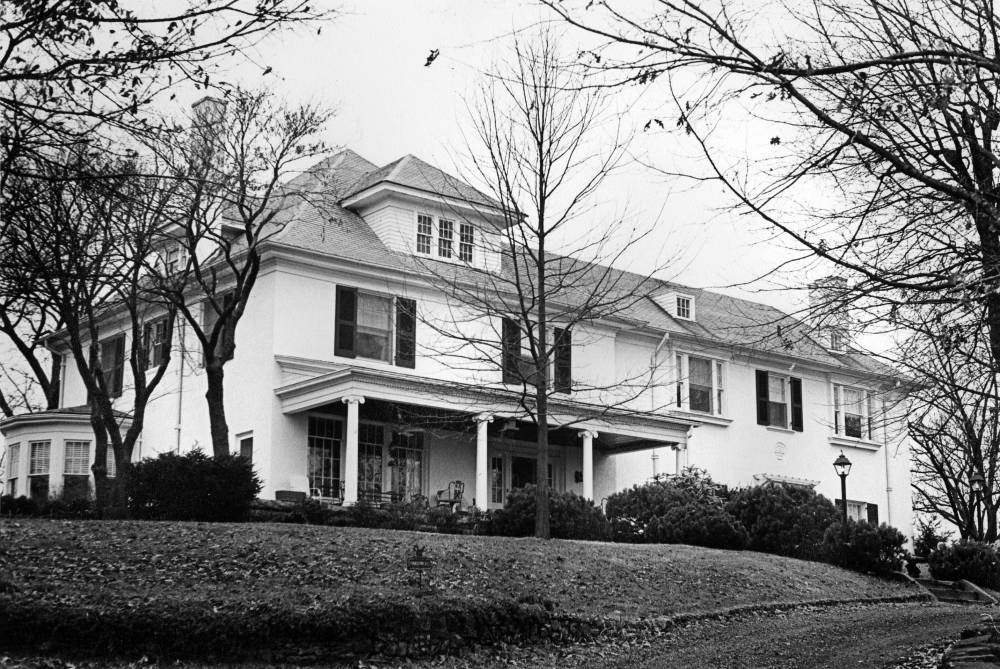 Oakenwold was featured in what is commonly referred to as the "Old-House Series," published in the Missourian in 1972-73. The Peironnet home was the 15th residence in the series, and the story was written by Sally Owen. She interviewed Charlotte Albert Black for the article. Black and her son and daughter-in-law, Mr. and Mrs. Wendell P. Black, co-owned the house.

The article, published Dec. 16, 1972, describes the result of the fire and described its restored interior:

"...In 1929, the part of the house built originally by the Peironnets burned, gutting the interior and leaving only the exterior walls and white porch columns standing. Fortunately, the 1914 addition was not badly damaged.

"Reconstructed, using the same floor plan and double-thick brick walls, the house is today much as it was at the turn of the century.

"Constructed during what Mrs. Black calls the 'Golden Oak Period,' large pillars were between room openings in the original house, she recalls

"The house itself is of a gracious southern design, with a long front veranda and gently sloping, well-landscaped lawn. It is a spacious house with wide, shuttered windows and a front door with glass side panels much like those found in old Mississippi and Louisiana homes. Exterior bricks are covered with stucco...

"Visitors step into a wide entrance which contains two pieces of furniture rescued from the 1929 fire. One is what Mrs. Black describes as a 'petticoat' table. It was actually a china closet, with a mirror underneath. The top portion has been removed. Purpose of the low mirror, Mrs.Black explains, was to allow women to examine their long skirts and see how they fell. A massive sideboard was also saved.

"A staircase of glossy mahogany, gracefully curved at the top, forms a rotunda-like effect in the upstairs hallway. There was once a stained glass window with the family crest on the staircase landing. That, too, was destroyed in the fire and was replaced with regular, rather than stained, glass...

"A large, oblong room, the living room is dominated by a classic mantel in one end. Mrs. Black says she recalls 'many a winter night when there was a roaring fire in that fireplace.' Decorative gold molding is found around windows in the room, and the French doors have beveled glass.

"Ceilings in the living room are 12 feet high, and 10 feet high in the rest of the house.

"The type molding used around the living room ceiling is an unusual example, Mrs. Wendell P. Black points out. Using a technique which employs plaster, the design was cast and then put up. The same method was often used in Williamsburg, Virginia, she says...

"Oakenwold, comments Mrs. Black, seated in the comfortably furnished library that offers a view of the Mississippi River by peaking through the trees, 'is just home.'"