A history of Leemon 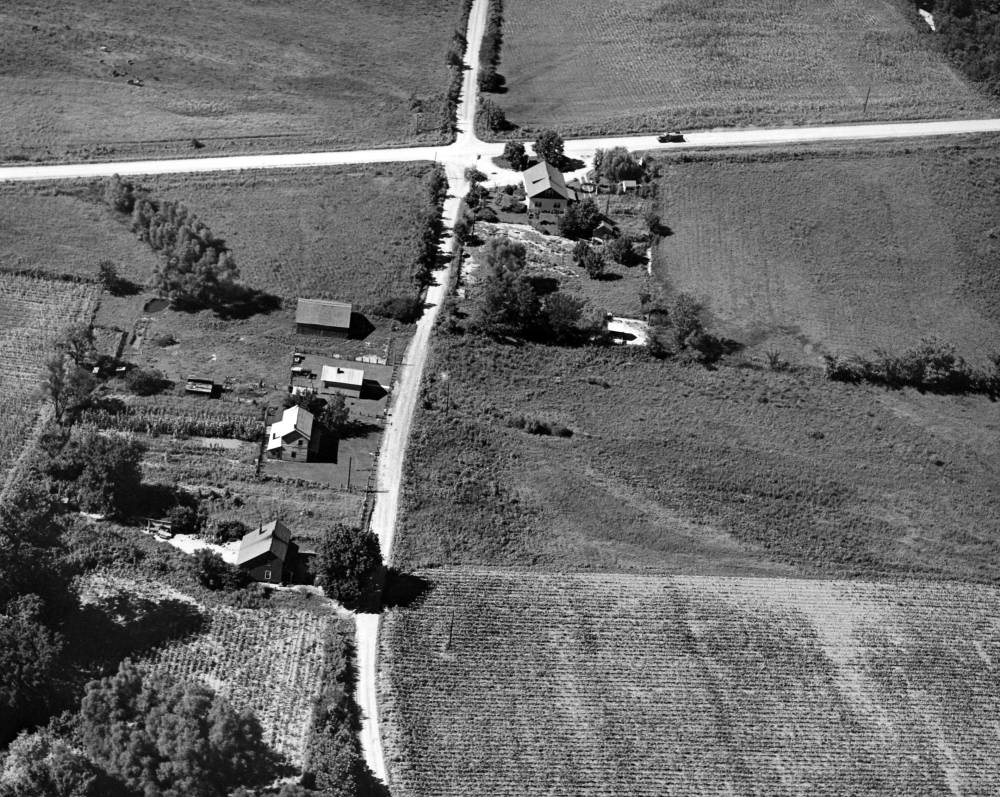 In 1949, The Southeast Missourian published a series of aerial photographs it called "From the Air" featuring area towns. While many of these features included articles about the towns, the one for Leemon, published Oct. 25, consisted only of the photo above and this brief description: "A few families gathered at various sports in Cape County many years ago and set up small villages. Some of these small concentrations remain, and one of those remaining is Leemon... Among the first to settle in the area was the McNeely family. Some time after the Civil War the place supported a post office, but the community is now served by a rural route. The photo, looking north, shows the Fruitland-to-Neelys Landing farm-to-market road running across the top of the picture, bisected by a rural crossroad. The building at the intersection is the Oscar Ward store, built by Charles Farrow, and the Wards have operated it for nine years. Other past store owners in the community were Logan Roberts and Earl McKee."
Longtime Missourian contributor and justice of the peace John G. Putz did a better job presenting Leemon's history in this undated article:

Twenty-one years ago, when the last authentic map of Cape Girardeau County was given to the public, the course Indian Creek was omitted from the drawing. Rising as it does near Pocahontas, the headwaters of the creek are traced from the springs to the Doyle place within a half mile of Leemon, and then there is a break of about two and one-half miles, the tracing appearing again in Section 12. And yet this omitted part of the stream is the most remarkable, as therein lies a natural sportive act where "Nature wantoned as in her prime, and played at will her virgin fancies."

The wide basin in Indian Creek, above Leemon, with its fertile bottom fields, suddenly narrow when the foot of Mount Nebo on the south boldly steps in the way of the creek and the waters, as if fleeing from the jutting prominence of the bold knob, swerve northward, only to be met by a spur of the range of hills that borders on the basin to the northward. In this narrow aperture, which would, in Kentucky mountain idiom, be designated as "the gap," is the little village of Leemon, a dreamy country place for small assembly of houses, clustering around the north approach of the bridge over Apple Creek. The place is not old, as age goes, but it has quite a lot of local history remarkable for its origin and subsequent changeful progress.

Harking back to the year 1849, we find a Tennessee pioneer, Thomas Hale (Hail) leaving his native (Bedford) county to come to this county, which at that time was being populated by a diversity of people seldom found in a community. Settlers came from Tennessee, Illinois, Kentucky, Georgia, Carolinas both North and South, from Germany, Austria and England, and it had become known abroad that this part of Missouri was an Eldorado agriculturally. On Oct. 8, 1859, Thomas Hale purchased 200 acres in Section 9, west of the present site of Leemon, and settled there with his family, consisting of wife and six children. Among the sons of the family was one Leemon, who was later to establish the trading post and post office to bear his name.

When President Lincoln called volunteers to arms during the war between the states, Leemon Haile offered his services to his country, and was made captain of a company of state militia, the main duty of which was to suppress roving bands of "bush-whackers" which had become a menace in this part of the state. Captain Haile, prior to his enlistment, had made his home in St. Louis, had married Miss Lizzie Chambers of Illinois and had for a while lived in Neelys Landing. After cessation of hostilities, he engaged in the business of manufacturing lumber, and on Aug. 16, 1865, set up a saw mill on the lands of Anderson Mitchell. The hills and valleys were at that time covered with virgin forests, yielding choice lumber in a wide variety. On Sept. 14, 1874, Leemon Haile purchased from Maria L. Niblack 200 acres of land on which is now the village of Leemon, paying $540 for the 200 acres. He then established his lumber manufacturing plant at the site near the present Leemon bridge, and applied for the establishment of a post office, which was soon granted and named in the honor of the founder of the trading post.

Leemon Haile's establishment and plant became widely known as a trading center and gathering place for the country round-about. His mills turn out the building material for many farm homes in the southeastern part of Shawnee Township. People from the countryside would assemble there to exchange gossip, sit around and watch the steam-driven circular saw dig its whining way into the hearts of the forest giants and convert them into useful boards and beams. Flor the youth of the community the plant was a source of constant wander and admiration. And when Leemon Haile erected an ice house on the bank of Indian Creek, and stored therein tons of natural ice packed in sawdust, it was the first time in the history of the community that ice was seen in the summer time, when he liberally gave his stores to neighbors and friends for their use.

Many were the days when the owner of the lumber plant would sit on a convenient log where he could oversee the work of the mill, while he would spin yards with his neighbors. Among them was one Joe Owens, the man with the wooden leg, who lived on the south side of Mount Nebo, but spent many a day with his friend at the mill. The two would then out-do each other in the telling of "whoppers," much to the edification of their listeners, of whom there was always quite a number. The Hail home, standing on a rise south of the mill, was the gathering place for the gentle-folks and always open to the friends of the captain and his wife.

Later Leemon Hail had moved to Allenville and there engaged in the lumber business in a larger way, but met business reverses, and died there in 1894, his comfortable fortune swept away, and his widow in want, finally found refuge in the county home where she died about 10 years ago. There were no children.

Leemon, whoever, continued as a trading post and post office, and had the distinction of being on two rural routes, one going out from Jackson, the other from Neelys Landing. About the year 1900, Pinkney Morton opened a general merchandise establishment at Leemon, and was made postmaster, after the office had been housed in the Jacob Dole home, a quarter of a mile up the creek, for some time. Morton was succeeded by B.F. Sides in the operation of the store, who sold out to B.B. McNeely. McNeely was succeeded by Charles Morton, Henry W. Putz & Son, Lee Masterson, Gohn & Martin, and the Leemon Store company, the present owner.

The automobile and fine highways have practically eliminated Leemon as a trading post as they have so many other places of greater and of lesser importance in this part of the state. But the site is permeated by tradition and folklore as the sand is by water. The steel bridge, the only one spanning Indian Creek for miles from Leemon, was built there in the year 1899, replacing a wooden structure which had become unsafe. John T. McNeely, a nephew of the founder, now owns the fine farm...