In early 1898 Frank Dunlap, with the help of his wife, Mary Charlotte (Van Frank) Dunlap, a Cape Girardeau native, began remodeling the Riverview Hotel on the river in downtown Cape Girardeau. They intended to convert the old hotel into a sanitarium, where the ill might come to regain their health.

One of the first descriptions carried in The Weekly Democrat newspaper of Frank Dunlap was this: "Frank Dunlap... is the man who made a trip around the world on a bicycle. He is well known all over the country."

Whether that statement is true or not, Dunlap had a great interest in bicycles, specifically bicycle racing. And in the summer of 1898 he organized a race between Cape Girardeau and Jackson. Between 300 and 400 people from St. Louis were expected to witness the race.

Soon, however, the event was transformed from a cross-country affair to a race on a board track.

Dunlap apparently used his influence in the bicycle racing world to interest Homer A. Canfield of St. Louis to get involved. An item in the July 23, 1898, Democrat stated that Canfield had "leased the Albert property north of the Riverview Sanitarium and will fit up the finest bicycle race track in the state." A few years later, the shoe factory would be built upon that site.

The July 30 edition provided more details of the track: "Cape will have a quarter-mile bicycle track. Homer A. Canfield, chairman of the L.A.W. (League of American Wheelmen) state racing board, writes that he has secured a good location. The track will be called 'The Riverview,' as it will be located on the bank of the river and spectators will be able to see for miles up and down river from the grandstand. According to terms of the lease, the facility must be completed by Sept. 15."

The race, which initially was scheduled for July 24, was delayed until July 30, and then delayed again to Aug. 21. Finally, the race and opening day of the Riverview Cycle Track was postponed until Labor Day, Sept. 5.

Henry Ossenkop, a Cape Girardeau builder, was given the contract to fence the property, as well as construct the board track and the grandstand. An estimated 38,000 feet of lumber, supplied by the Leming sawmill in Cape Girardeau, was required just to build the track. When finished, it was estimated the facility would cost about $3,000.

Labor Day rolled around. But, unfortunately, so did the rain. Showers halted all the races that Monday and again the next day. The first race didn't come off until Friday, Sept. 9. The next day's Democrat gave a brief account:

A March 21, 1967, story in the sports section of the Southeast Missourian elaborates on the track's history. Here's an excerpt: 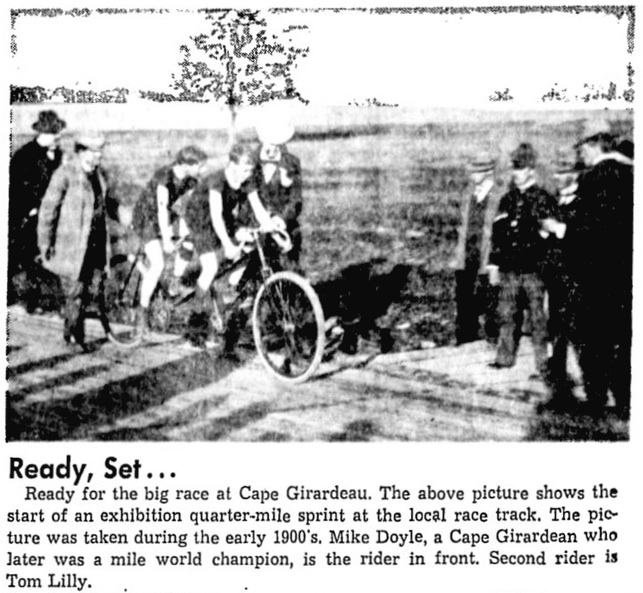 A noted heart specialist once said that if he could have his way, he would put the entire nation on bicycles for its health.

The two-wheel means of transportation, described as the fastest means a person can use his own power to get from one place to another, once afforded the United States with one of its greatest sports attractions -- bicycle racing.

About the turn of the century, bicycle racing rivaled horse racing in this country, and although it has lost some of its popularity, is still a favorite amateur sport.

During the early 1900s, Cape Girardeau became one of the most famous bicycle-race towns in the Midwest. A quarter-mile track, located where the International Shoe Co. building now stands, was constructed, and attracted some of the all-time, world famous greats.

Popular names of the times who appeared locally included Jim Michael of Wales; Bill Martin of South Africa, and Slim McFarland of California.

Cape Girardeau even furnished the sport with a world champion in the mile ride, E.M. Doyle, in the year 1901.

It wasn't at all unusual to see a couple thousand people gathered at the grandstands of the racing track to attend the regular "Grand-Circuit" races here.

The League of American Wheelmen outlawed Sunday racing and many of the races were held on holidays, Saturday and some weekday evenings.

A world-famous German racer, whose name we failed to obtain, often used the Cape Girardeau track for practicing in preparation for the annual six-day races, one of the top sports attractions in America.

The local races usually afforded bicyclists an opportunity to pick up prize money, totaling from $100 to $150, which was quite a prize in those days...

Oddly, for all the ink the newspaper devoted to Dunlop, Canfield and the track, there is little information about the actual races published in the Democrat. Perhaps they didn't last long enough.

By the fall of 1898, Duncan's name was in the news again, but not in a good way. The Oct. 15, 1898, Democrat reported on its front page that Frank Dunlop had attempted to kill Frank S. Yantis, former auditor of the Houck Railroad, at the train depot. Apparently, Dunlop took exception to remarks Yantis made about "some of the ladies connected with the family of Mr. Dunlop and also some ladies who make their home at the (Riverview) hotel. The alleged remarks were of a grossly slanderous character and well calculated to stir up the anger of a man who was related to those about whom the remarks were made."

Dunlop, having heard the remarks, went so far as to have an affidavit, witnessed by several residents, drawn up recording the remarks Yantis made.

Armed with the affidavit, as well as a pistol, Dunlop confronted Yantis at the depot. According to the Democrat, as "Yantis got off the train at the depot... Dunlop approached and drawing his pistol fired point blank at Yantis. The man who did the shooting was laboring under considerable excitement which doubtless interfered with his aim. The depot platform was crowded and eye witnesses say Dunlop evidently meant business. When Dunlop saw that he had missed his man, he seized his pistol by the barrel and struck Yantis over the head with it inflicting a painful but not serious flesh wound. At this juncture bystanders rushed between the two and Dunlop was disarmed."

While Dunlop was arraigned in court on a charge of assault with intent to kill, the case evidently went away. At least, articles about the incident disappeared almost immediately from the pages of the newspaper.

But that wasn't the end of Dunlop's legal problems. By the first part of 1899 Dunlop's hotel business was in trouble. In January, the hotel was placed in the hands of a receiver, with liabilities given as $20,000. There are indications that Dunlop failed to pay Albrecht and Rudolph Walther for some furniture he bought for the hotel. Online court records show that the Walthers got a judgement against Dunlop on Jan. 27, 1899, for $381.93. But Dunlop sold several pieces of furniture to his father-in-law, Philip R. Van Frank.

In March 1899, a legal notice was published in the Democrat:"Notice is hereby given that I, as assignee of Frank H. Dunlop and Mary C. Dunlop, will upon the 27th, 28th and 29th day of March A.D. 1899, in the Common Pleas Courthouse in the city of Cape Girardeau... proceed publicly to adjust and allow demands against the estate and effects of the assignors. Those persons having claims against assignors failing to attend at the time and place mentioned and lay before the assignee the nature and amount of their demands may be precluded from any benefit of the assets of the estate of said assignors. ROBERT G. RANNEY, assignee."

That was followed in August by a legal notice of a sheriff's sale: "By virtue and authority of a special execution issued from the office of the clerk of the Circuit Court of Cape Girardeau County, Missouri, bearing date 26th day of July, 1899, and returnable to the August term, 1899, of said court and to me directed in favor of M.E. Leming and against Henry C. Ossenkop, Frank H. Dunlop and Homer A. Canfield, I have levied upon and seized all the right, title and interest of said Henry C. Ossenkop, Frank H. Dunlop and Homer A. Canfield in and to the following described property: The leasehold interest of Homer A. Canfield and Frank H. Cunlop of, in and to the aforesaid real estate... Also a bicycle track, audience stand and fencing on said above described lots, and I will, on Wednesday, Aug. 23, 1899, between the hours of 9 o'clock in the forenoon and 5 o'clock in the afternoon of that day and during the session of the aforesaid circuit court, at the south front courthouse door in the city of Jackson, Cape Girardeau County, Missouri, sell the same at public vendue, to the highest bidder for cash in hand, to satisfy said execution and costs. BERNARD GOCKEL, Sheriff of Cape Girardeau County."

The successful bidder for the property apparently was M.E. Leming. By September he had "a force of hands at work taking down the bicycle track."

Dunlop's ill fortune appears to have continued, and the last item the Democrat carried about him was this on Jan. 20, 1900: "Frank H. Dunlop returned home last night from a trip to Southwest Missouri. The rumor that Mr. Dunlop had left town for good was false. He was away on business, and he tells us that he is now here to do business and has the money to do business with."