'James' Laskaris and the Coney Island

In the spring of 1942 residents of the United States had only one thing on their minds: War. Practically every page of the local newspaper had some news about the conflict: Head shots of men and women entering service or being promoted to new ranks and new dangers; rationing of rubber and sugar; classes geared toward airplane mechanics or aviation; cuff-less men's trousers; scrap metal drives and war bond rallies.

On March 27, 1942, a local restaurateur pledged in a front-page article in the Southeast Missourian that he would donate a whole day's business receipts to the war effort. The article called it his personal "War Relief Day."

That man was Demetrios "James" Laskaris, a Greek immigrant and most likely a naturalized American citizen, although I haven't been able to verify that. Here's his story.

LASKARIS TO GIVE DAY'S BUSINESS PROCEEDS TO WAR

James Laskaris, owner and proprietor of the Coney Island Lunch Stand, 513 Broadway, has designated Saturday as his personally appointed "War Relief Day." Beginning tonight at 12 o'clock midnight and continuing until 12 o'clock midnight Saturday, Mr. Laskaris will give all proceeds he derives from his business to war relief.

"I have been wanting to do something I can to help Uncle Sam win this war. I can't do very much, but I'm willing to give all I take in on Saturday toward war relief," Mr. Lakaris said. He estimated that receipts from his business on that day will amount to more than $100 and said the money will be turned over to the federal internal revenue office here to be sent to the U.S. Treasury.

Jim, as he is known to hundreds of acquaintances, has been in business here 20 years. He was not a member of the armed forces in the first World War and, being a little past military age, in the light of the current draft, he wants to help in the way he can.

"I want a lot of business Saturday, because the more business I do the more it will mean to Uncle Sam," he said.

A reporter learned that Jim has already shown his patriotism by purchasing a substantial block of defense bonds.

The day proved enough of a success that Laskaris repeated his "War Relief Day" later that year.

The entire day's receipts to be given to the United States Treasury to help in the war effort, Mr. and Mrs. James Laskaris announced today that $146.54 was taken in Saturday at the Coney Island restaurant, 513 Broadway.

This exceeds a normal Saturday's business by from $50 to $60, and this was despite the handicap of the inclement weather which prevailed Saturday.

The money, accompanied by a letter of explanation, will be sent at once to the Treasury Department.

Once before Mr. and Mrs. Laskaris gave a day's receipts of their restaurant to the war effort, the amount that time, back in March, amounting to $127.50. In return they received a letter of appreciation from the treasury.

Records show that James Laskaris was born Oct. 26, 1888, in Sparta, Greece. He immigrated to the United States in about 1904, traveling to his new home alone. Once here, he joined an older brother already in the country, Panagiotis I. "Pete" Laskaris.

James was employed for some years helping to build railroads and even worked in the mines in the Lead Belt. By 1928, however, he was married and living in Cape Girardeau. With his wife Rose's help, he ran a restaurant -- the Coney Island -- at 509 Broadway, likely living behind or above the place of business. One account of his business history here says, "Laskaris came to Cape Girardeau a quarter of (a) century ago (circa 1921) as a railroad worker, first established a sandwich shop in a wagon and remained to amass a modest fortune through hard work and long hours of endeavor."

In 1930 contractor Tom Rickard built James a new restaurant at 513 Broadway. Excavation for the foundation began in June of that year for a "two-tone colored brick" structure of Spanish design. It was to have arched entrances and windows. The building was to have a frontage of 25 feet and a length of 50 feet.

James Laskaris passed away at age 58 in Los Angeles, California, on Feb. 10, 1945. His obituary explained, "He had suffered for several months from a dropsical condition and with his wife went to California hoping to improve his health." His wife and his brother accompanied the body back to Cape Girardeau for burial at New Lorimier Cemetery.

His estate, worth $13,389.15, was settled in May 1946. His widow inherited half of the estate, and the rest was apportioned among relatives here and in Greece, including his brother, Pete, of Cape Girardeau and his sister, Antona Spyros Poulas of Greece.

Pete apparently operated the Coney Island for a while, but it was eventually sold to Pete George. (Pete Laskaris died in 1956 in a Cape Girardeau nursing home. He is buried close to his brother at New Lorimier.)

Just when it closed isn't known, but I did find a short story from Jan. 25, 1960, that said the building at 513 Broadway was being remodeled and expanded to house the Electric Supply Co. The building at that time was owned by W.D. Deevers. 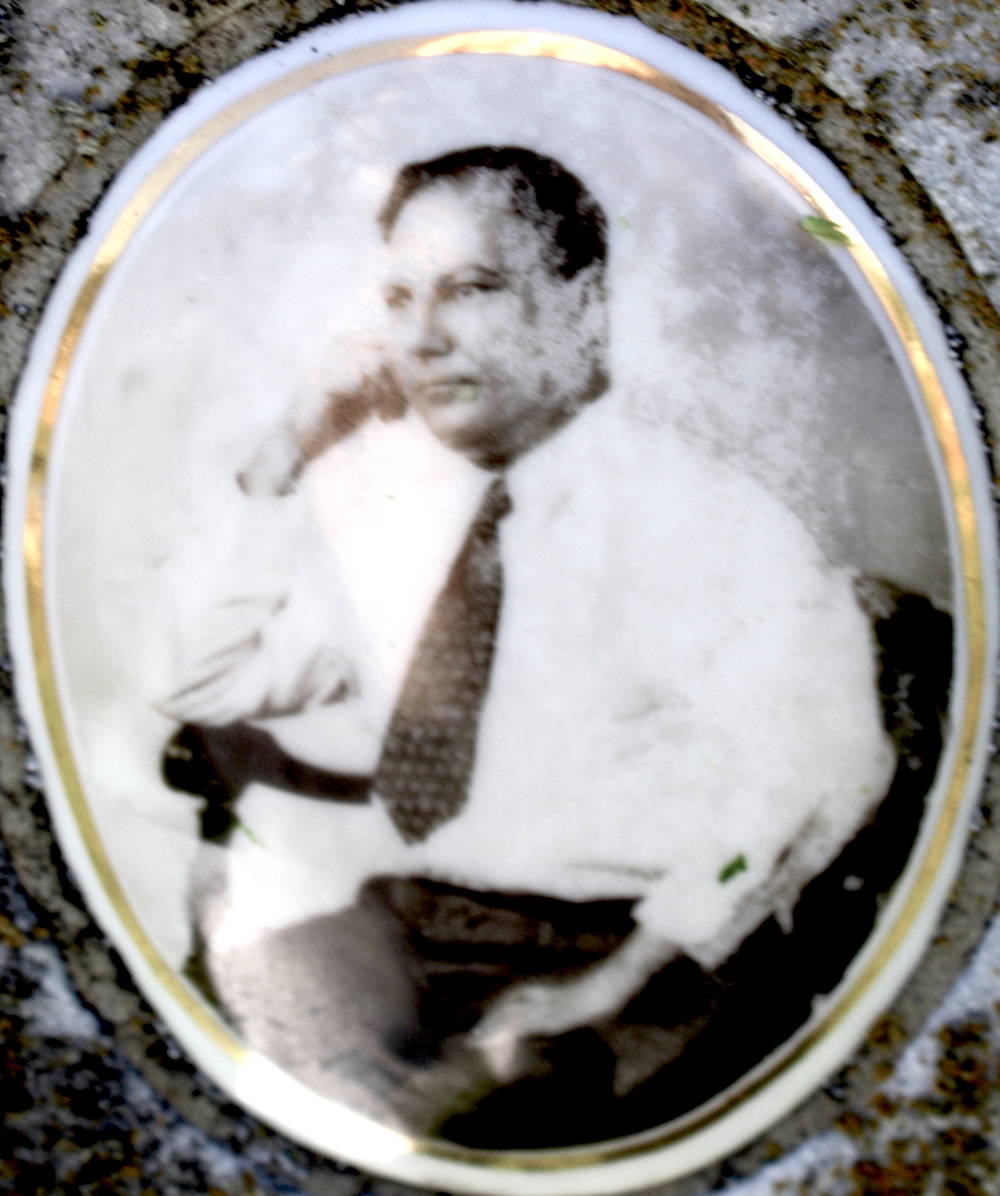 This is an enlargement of the portrait of James Laskaris from his tombstone at New Lorimier Cemetery.