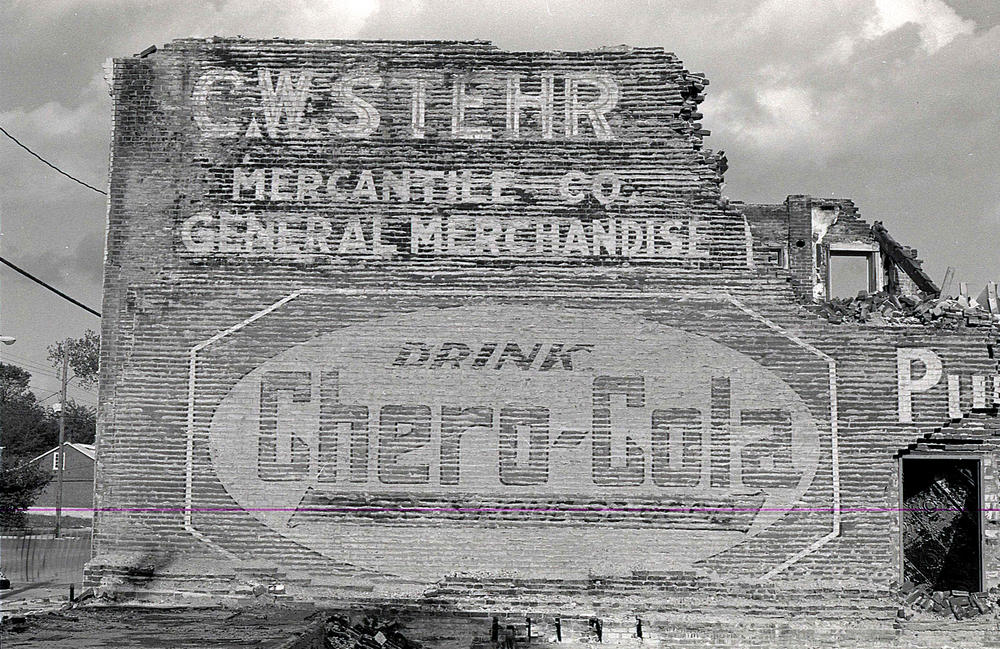 In the spring of 1993, when the walls of the old Orpheum Theater on Good Hope Street came tumbling down, a vision of Haarig's past was revealed. This sign was painted on the west wall of the former C.W. Stehr Mercantile store. It was revealed when the Orpheum was razed.

One of our photographers at that time, knowing I was related to the Stehr family, captured this view of the sign, and it was published in the Southeast Missourian on May 21, 1993.

Chero-Cola was a short-lived industry in Cape Girardeau. In October 1914, K.O. Grassham of Paducah, Kentucky, traveled to our river town looking for a location for a plant which would manufacture "a popular new drink called 'Chero-Cola.'"

Grassham's efforts proved successful and in November 1914 G.W. Abell, manager for the Chero-Cola Co., came here from Paducah to open the factory. By that time most of the machinery had arrived, and Abell's task was to hire and train the men needed to produce the soft drink.

By December 1914, the factory, which was located in the Morrison Building on South Spanish Street, was manufacturing the cola. Initially, workers used city water to make the soft drink "with poor results." Once they switched to pure well water, they began producing "a tasty beverage."

An article on the front page of The Weekly Tribune and the Cape County Herald newspaper on Dec. 18, 1914, gave details of the opening of the business.

The branch factory here sported machinery worth "in the neighborhood of $10,000," according to Grassham. He continued, "We will employ at the plant about 10 men during the winter and perhaps twice that number in the summer.

"Our plant is as sanitary as is possible to make it. Our bottles are washed in alkali water at a temperature of 120 degrees, and after they have remained in the solution for 15 minutes, they are put through three rinsing machines, after which they are thoroughly drained before being filled. Our syrups are also strained three times before using, and nothing is overlooked that could tend to preserve cleanliness in the preparation of the drink."

Bad luck seemed to plague the company during its brief time here. An example is found in this item, which I included in a previous blog: 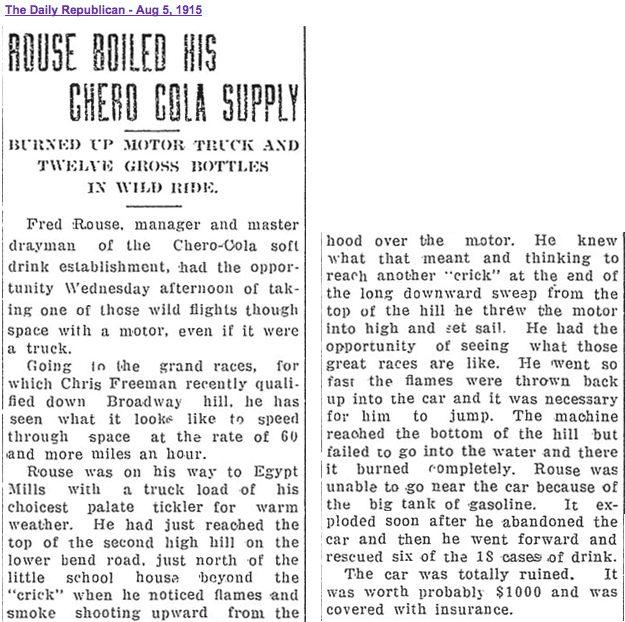 On Dec. 22, 1915, The Daily Republican, forerunner of the Southeast Missourian, reported that the Chero-Cola plant had been slightly damaged by fire the previous night. The fire was confined to the business offices, and the books of the company were "burned to ashes."

Being of a suspicious nature, I have to wonder if the company was having financial problems. Perhaps the fire was an "inside job" to mask its troubles.

FIREMEN SAVE BOTTLING WORKS FROM EXPLOSION

An explosion that might have wrecked the entire building occupied by the Chero-Cola Bottling Company on South Spanish Street last night as narrowly averted when firemen broke into the office of the company and carried out a five-gallon can of gasoline which was surrounded by flames.

Both the openings of the gasoline container were open and Fire Chief A.C. Dittlinger, after the fire had been extinguished, declared that it was a remarkable circumstance that the gasoline had not been exploded.

"The flames were virtually playing about the mouth of the can, when we went in," he said, "and I belief if it had stayed there much longer, the gasoline would have raised the roof."

The fire is believed to have been started when a large heating stove became overheated. The interior of the company's office was gutted with fire and all the company's records were lost in the blaze.

The stove had been filled with coal early in the evening and closed tight for the night, Fred Rouse, manager of the concern said. It hade been customary to leave a fire burning in the heater stove over night, he said.

When the fire became too hot, the woodwork nearby caught fire and the blaze started up the side of the wall.

The blaze was first discovered by Patrolman Arthur Whitener, who ran to a fire alarm box nearby and turned in an alarm. Aud True, an express man, also saw the fire a few moments later and telephoned to the operator, describing the location of the fire.

Workmen employed at the bottling works rushed to the scene of the fire and attempted to force their way inside to aid in taking out some of the books, before the fire department arrived.

Within a few moments the fire department arrived at the building and Chief Dittlinger ordered the volunteer workers to come away from the door. Before the fire company was prepared to throw water on the blaze, to kick in the doors would create a draft and aid the blaze in getting a start, he said.

Little damage was done to the machinery inside of the building, Mr. Rouse declared last night after an inspection of the plant. The machinery is valued at about $8,000.

In the office all the books of the company were wiped out. One of the books contained $600 worth of open accounts, of which Rouse said he had no other record.

He estimated the damage to the office and building will be about $500. He said he did not know if the part of the establishment that was burned is covered by fire insurance. The policies are held at the home office of the concern, and he declared he did not remember if they included the office and fixtures.

He said the machinery, he was sure was insured, but the policies had been renewed but a few days ago.

The gasoline that Mr. Rouse had placed in the office near the stove, he said, he had planned to use in cleaning machinery parts and in addition, he and his workmen had planned to take one of the company's cars down for repairs today.

An additional hazard for the firemen in the bottling plant was danger form a possible explosion of several large gas drums used in the bottling process. Liquid gas at a pressure of 1,400 pounds to the square inch is contained in the steel drums. This gas is used in carbonizing the soda water as it is manufactured.

Should the firemen have knocked one of the drums out of place and had the stop-cocks at the ends been knocked off, Rouse Said there would have been an explosion that would have thrown the plant and probably some of the building on either side into the sky in hunks.

Alas, nothing in the Missourian archive sheds any light on my suspicions. But on June 12, 1916, the newspaper published the following brief item:

"The Chero-Cola Company, which has been operating in Cape Girardeau the past 18 months, has quit business and all the machinery, bottles and other property of the company has been hauled to the levee, where it will be loaded on a boat and taken to Paducah..."

Chero-Cola fared better further south. It was developed by Claud A. Hatcher, a grocer in Columbus, Georgia. Today, we know the drink as RC Cola or Royal Crown Cola.