The disappearance of Roy E. Schneider 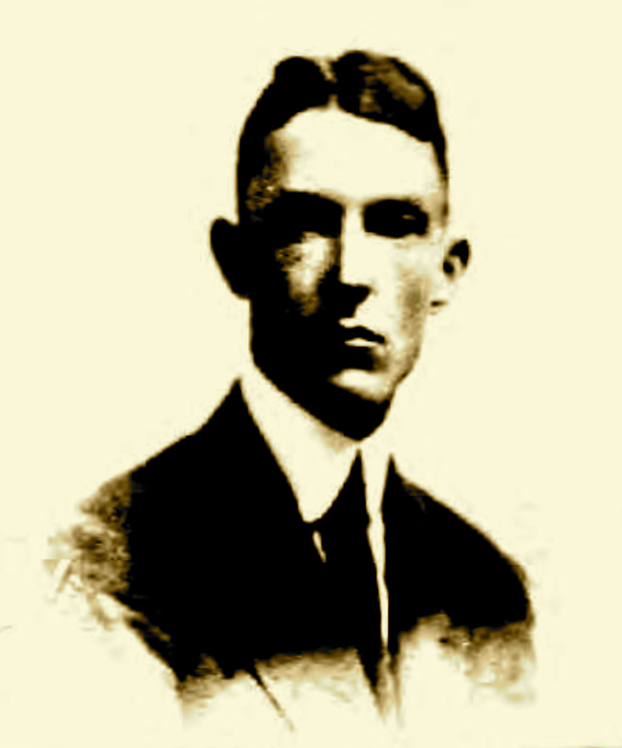 Roy E. Schneider is a man of mystery. In fact, that's not even his real name.

The native of Cape Girardean County was born Roy Ehrenschneider on Feb. 21, 1894, to George and Mary Krehbiel Ehrenschneider. At the time he entered military service in 1917, Roy shortened his surname -- for obvious reasons -- to the more conventional Roy Ernest Schneider.

I've found stories about him from time to time in the pages of the Southeast Missourian. Some claimed that he was a hero pilot of World War I, but it's more likely that he was an airplane mechanic or a trainer of mechanics or pilots. The later stories all agree that Roy went missing in the 1930s and was never heard from again.

Using Ancestry.com, with its millions of records and numerous family trees, I was only able to locate four documents that refer to him. One was a 1910 Federal Census report, which had him living with his parents and sisters in Cape Girardeau. The other three are immigration records. One is a passport application and another is an application for consular registration in Brazil. The photo above was taken from his passport. The final document was a ship's passenger list.

His passport application confirms that Roy served in the U.S. Navy from June 1917 to June 1919. His physical description was ordinary: 5 feet, 10 inches tall; medium forehead; grey eyes, medium nose; medium mouth; medium chin; dark hair; ruddy complexion; oval face. The application, dated June 23, 1919, also says he was a resident of Riverside, Connecticut. It indicated that he was a mechanic and intended to travel the next two years in Brazil, Bolivia and other Latin American countries for commercial purposes. An accompanying letter said that he was "an employee of the Curtiss Aeroplane & Motor Corporation" and that he desired the passport "for travel to Brazil, Argentina, Chile, Peru and other Latin American countries."

His consular registration continues the stories of his travels. It says he left the United States on Aug. 2, 1919, arriving at Rio de Janeiro, Brazil, on Aug. 27, 1919. It noted that he was an airplane mechanic working for the Curtiss airplane corporation of New York City.

A passenger list for the ship President Hayes has Roy departing Rio de Janeiro and arriving back in the U.S. at the port of Los Angeles, California, on Dec. 13, 1923.

Notes in the files of the Southeast Missourian show that he returned to Cape Girardeau early in January 1925 to visit his parents. They said he was a mechanic with an airplane manufacturing plant in Brazil.

While I have been unable to unearth any more government documents about his travels, an article in the Missourian dated Dec. 26, 1930, said that he had been visiting Cape Girardeau for Christmas, the first time in two years that he had been home. He was then in the employ of the General Motors Export Corp., stationed in Brazil the two previous years.

It's there that Roy's paper trail ends.

In April 1941, George Ehrenschneider, Roy's father, told the newspaper he was going to have his son declared dead, so that his estate might be settled. The article indicated the family had last had contact with Roy on Feb. 12, 1934. Here is that article, along with one from the following month that describes Roy's adventurous life. 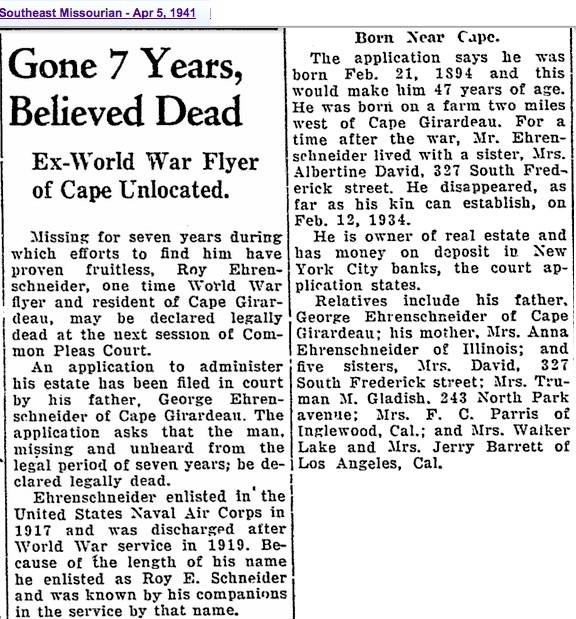 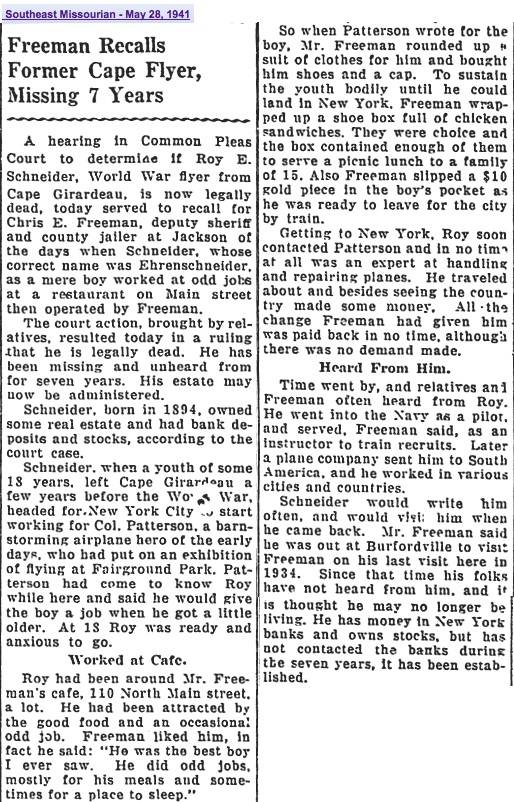 A call to the Cape Girardeau County Archive Center in Jackson produced a thick file of documents pertaining to the settlement of Roy's estate. It also added another nugget of information concerning his disappearance.

After visiting family and friends here for several days, Roy left Cape Girardeau in his automobile for New Orleans on Feb. 12, 1934, with the intention of going to Mardi Gras. One of his sisters, Albertine David, received a postcard from him from New Orleans dated Feb. 17, 1934. That was the last communication the family had from Roy. In late February or early March 1934, they were contacted by the people with whom Roy had been rooming stating that he had disappeared, leaving behind his clothes and personal effects.

For seven years family members and their attorney, Rush H. Limbaugh, attempted to find Roy, even publishing ads in the Times Picayune newspaper offering a reward for information about him. In addition his employer, General Motors Corp., made efforts to find him to no avail. He was declared legally dead on May 26, 1941, and the lengthy process of dividing his small estate among his parents and five sisters began. It consisted of about three acres of land on the east side of Clark Street north of Broadway in Cape Girardeau, as some stock in General Motors, savings and checking accounts in the National City Bank of New York, and an Adjusted Service Certificate for $1,260 issued by the U.S. Veterans Bureau. In all, his estate was worth around $6,280.

I found nothing more in print about Roy or his family until the death of his mother, Mary, on Aug. 3, 1943, in Marion, Illinois. Her obituary doesn't mention Roy, alive or dead. The following month, the Court of Common Pleas ordered Roy's estate, amounting to $6,441.19, distributed among his father and sisters, Mrs. Albertine David, Mrs. Alma Parris, Mrs. Irene M. Gladish, Mrs. Mary Lake and Mrs. Mamie Barrett.

Again, the trail grows cold, until the Oct. 12, 1944, death of George Ehrenschneider in Cape Girardeau. The obit in the Missourian described him as a native of New Orleans and as being "76 years old, a painter and for 23 years a resident of the Cape Girardeau community." It lists his five daughters as his only survivors, and says he was predeceased by his wife and "a son, Roy Ehrenschneider, (who) died 11 years ago."

Apparently the deaths of Roy's parents delayed somewhat the probate process, and his estate wasn't completely settled until July 1951.