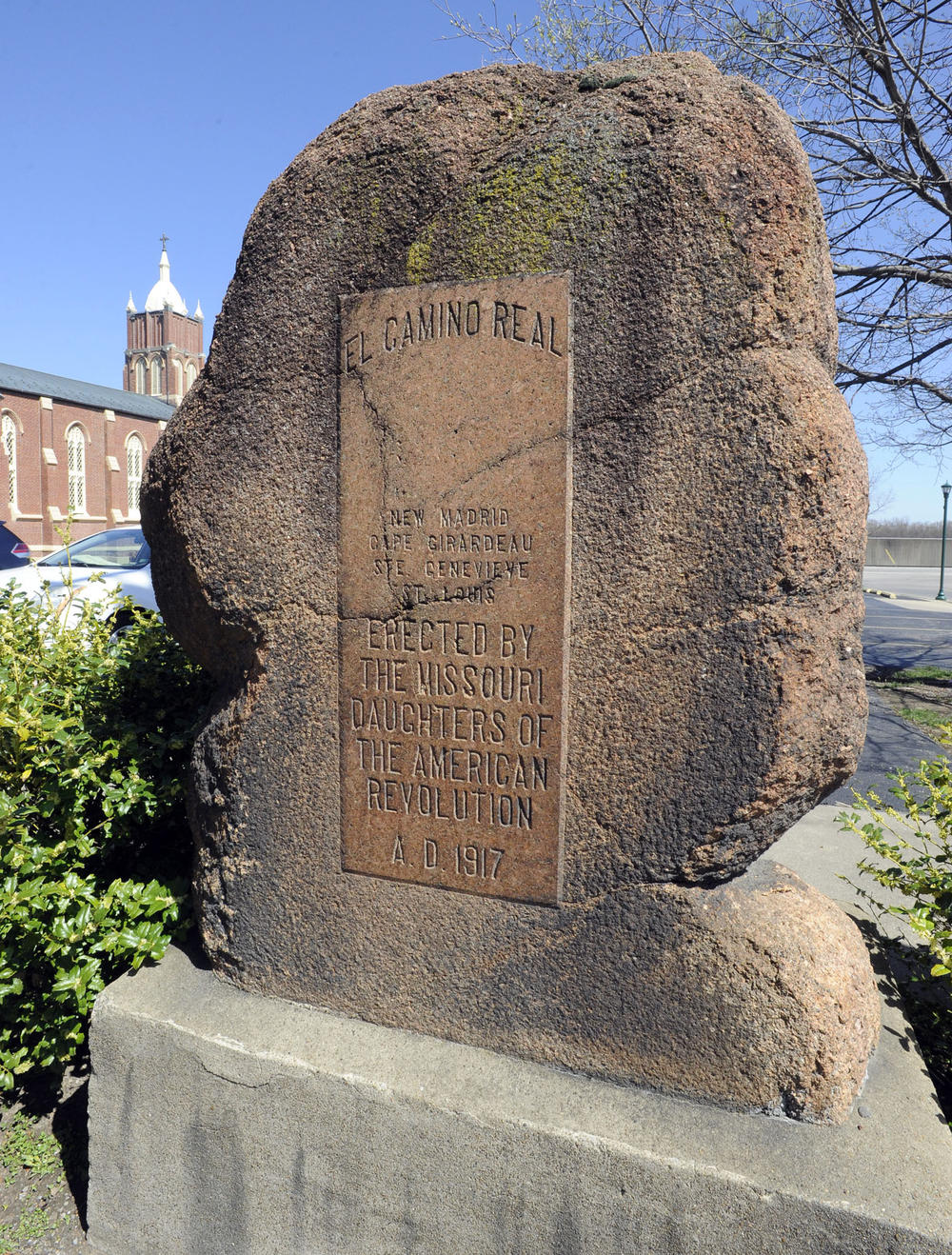 This marker was erected by the Daughters of the American Revolution and stands at the corner of Spanish and William streets in downtown Cape Girardeau. (Fred Lynch ~ Southeast Missourian)

For those of us who spend any time in old cemeteries hunting our elusive ancestors, Daughters of the American Revolution markers at the grave sites of Revolutionary War patriots are easily recognizable.

But graves aren't the only thing the D.A.R. have marked. If you've been keeping up with the Missourian's "Out of the Past" column, you'll no doubt recall that members of the Missouri D.A.R. in the early 1900s worked to recognize the route of the original El Camino Real -- the Royal Road or Kingshighway. Fellow blogger Fred Lynch provided the history of that road in 2012, focusing on the Cape Girardeau-Jackson area: http://www.semissourian.com/blogs/flynch/entry/45781

A short item appeared in The Daily Republican newspaper in June 1914 asking that anyone with any knowledge of the location of the original "Kings Highway," or other incidents connected with the road, contact Mrs. John Kochtitzky of Cape Girardeau. It noted that the Daughters of the American Revolution, of which Kochtitzky was the state chairman of the "old tracts committee," was attempting to locate and mark the road from New Madrid to St. Louis.

By the fall of that year enough information had apparently been gathered, and Kochtitzky and Mrs. Mark H. Salisbury, along with noted historian and head of the Cape Girardeau Commercial Club Allan H. Hinchey, drove from St. Mary to Ste. Genevieve along Kingshighway.

Hoping to gain monetary support for their endeavor, the Daughters appealed to the Missouri General Assembly, and in March 1915 it was announced that a bill to locate and mark the highway using an appropriation of $5,000 had passed in the House of Representatives. However, Missouri Senators weren't so generous. They rejected the bill in the fall of that year.

Still, the Daughters persevered. A newspaper item from the Oct. 16, 1915, edition of The Republican noted that, despite the setback, members had used the funds they had on hand to purchase three granite boulders from Graniteville, which would be placed at New Madrid, Cape Girardeau and Ste. Genevieve. (Benton, New Madrid and Caruthersville were later added to that list.)

The following spring, plans were made to place the Cape Girardeau marker on Spanish Street, near Old St. Vincent's Catholic Church, where it still stands. One side of the granite boulder testifies to the route of Kingshighway, while the other side notes the home of the city's founder, Louis Lorimier, was constructed near that site.

In November 1917, the granite boulder in Cape Girardeau was dedicated. 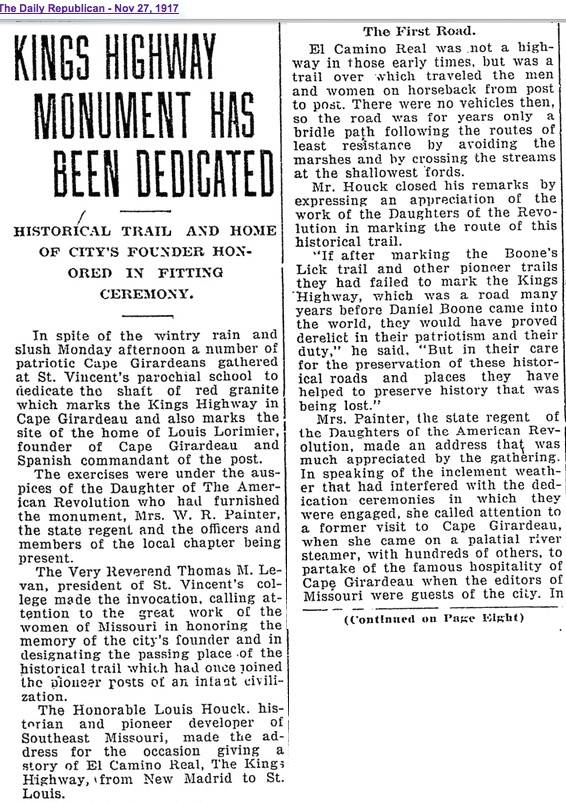 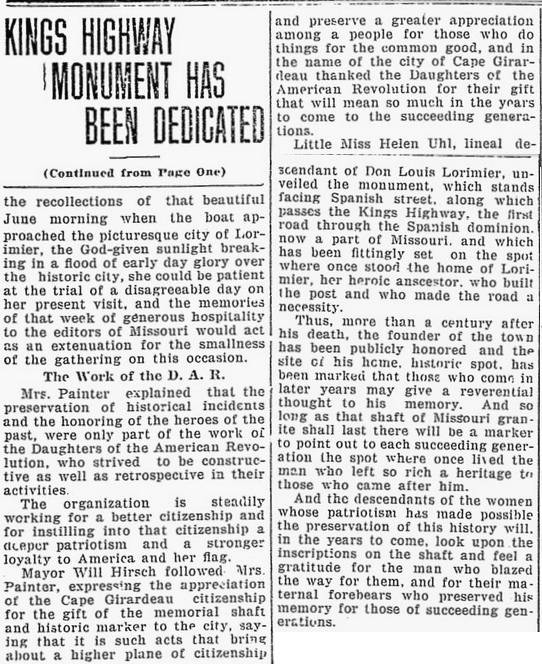 While researching the Missourian archives for this blog, I located a map published in The Daily Republican on March 25, 1915, which shows the route of El Camino Real. It also included the text of a circular the Daughters of the American Revolution had published giving the history of the highway. The circular was distributed to each member of the Missouri Legislature in the hopes of gaining support for the organization's efforts to mark the historic route.

The oldest public road in Missouri, and which during the Spanish domination became known as the Camino Real, King's Highway, (and also as the Illinois Road), extended from St. Louis to Little Prairie (now Caruthersville), and, thence a bridle path and foot path led to Campo de la Esperanza, located in Arkansas opposite what is now Memphis, Tenn.

The first settlement in Missouri was made near the present city of Ste. Genevieve, in what is still known as "the Big Field" in 1733. St. Louis was next settled in 1763. In 1772 a settlement existed where now is located New Madrid, then known as "L'Ause a la Graise" (Cove of Fat), but in 1787 Col. George Morgan laid out New Madrid and Fort Celeste was erected there by the Spanish government. In 1793 a Spanish military post was established at Cape Girardeau and in 1794 Little Prairie (now Caruthersville) was located, and in 1797 a town was laid out at this point and Fort San Fernando built. The establishment of these various Spanish posts naturally led to the gradual opening and establishment of the Camino Real between the posts, with a route or line of road more or less defined.

This road between the Spanish posts at first was merely a foot or bridle path, traversed by the Couriers des Bois and hunters. Gradually, as the population of the country increased, this road became more distinct and well defined. In 1797 large numbers of American settlers crossed the Mississippi to secure the free concessions of land offered by the Spanish commandants to all such Americans as desired to locate in the country, and these traveled north on this road, and by them int was also called the "Illinois road," because the country around St. Louis and as far south as the Meramac in those days was known as the Illinois country. St. Louis was always described by the Spanish officials in their records and public documents as "St. Louis of Illinois."

This Camino Real -- King's Highway -- starting from St. Louis, ran sough from that post to a point near the mouth of the Meramac, where a ferry then existed. Thence following the general direction of the river, although in the upland at some distance from the river bank, the road came to a point near where the Joachim empties into the Mississippi and where a ferry was also operated in 1798. Between the Joachim and Plattin a distillery was operated at that time, and the settlement between these two creeks was an important American settlement during the Spanish domination. A mill was operated on the Plattin in 1798. So it is quite clear that the Camino Real passed near the present towns of Crystal City, Festus and Herculaneum. Going south, this Camino Real passed through the present town of Bloomsdale; crossing Establishment Creek near where this place is now located, and thence the road went to Ste Genevieve, the premier Spanish post and settlement of Missouri and where a Spanish fort was located. Here the Camino Real connected with bridle paths and foot paths leading to Potosi, then known as Mine A Breton, and to Mine La Motte, and going to what in those days was known as "the mine country."

From Ste. Genevieve this Camino Real followed the west side of the Big Field to what is now known as Dodge's Creek, and thence to the mouth of the Saline, where in 1700 the French first began to boil salt, and thence up the Saline to the Big Shawnee Spring emptying into the creek. From this spring the road ran to the present city of Perryville, and thence to the Big Shawnee village on Apple Creek, some two or three miles east of Appleton. From the Big Shawnee village the road followed what was known at the time as the Shawnee Trace to the Spanish post of Cape Girardeau, on substantially what is now known as the Perryville Road. The Camino Real from Ste. Genevieve south, after leaving the bottom where is located the Big Field, followed the ridges, but here and there during the last century has in many places been moved from the ridges to more unfavorable ground. It should also be noted that after the establishment of Nouvelle Bourbon a road led from Ste. Genevieve to this post, and that very likely the original line of road, after crossing Dodge Creek, ran up Aux Vasse Creek to a ford on a road leading directly from Nouvelle Bourbon to the Big Shawnee Spring.

From Cape Girardeau south to New Madrid the road is still well defined, excepting that part of the road across the big bottom south of Cape Girardeau, known as the Grand Marais in Spanish times, and where the Camino Real ran near the river and which has since been washed away, but the location at Cape Girardeau is well defined, and so also a point at the end of what is now known as the Rock Levee in Scott County is well ascertained as being a part of the original highway. So also is the location at Benton and the road near Morley, and thence to New Madrid. The road from Morley to New Madrid is to this day known as the King's Highway -- El Camino Real.

From New Madrid the road or path ran south to near the present village of Point Pleasant, a settlement near the mouth of Portage Bay. The country along the road was generally occupied by Spanish grantees, and the surveys made for them show where they lived. Of course the road ran through or along these surveys. Below Point Pleasant the road must have followed Portage Bay, a well-known carrying place between the Mississippi and the waters of Little River, and then across this watercourse near its head. Spanish grants and surveys also indicate settlements at this point.

From Portage Bay and Open Lake the road likely passed through the high land near the banks of the Mississippi River to Bayou Gayoso, where also a number of Spanish grants were located and settlers had established themselves during the Spanish domination. Thence to Little Prairie the road ran not far from the river. At Little Prairie at that time was located Fort San Fernando, and the Spanish Commandant of this part of the New Madrid district resided there.

Along the Camino Real all the first settlers of Missouri traveled in early days and before the country was acquired by the United States. It was the great highway of that time. All Emigrants intending to settle in the Spanish country were required to secure permits from the post commandants resided in the four Spanish posts -- New Madrid, Cape Girardeau, Ste. Genevieve and St. Louis, and unless they came up the Mississippi, could only reach the various posts along the road. Many emigrants came down the Ohio and landed in New Madrid, and thence following El Camino Real -- the King's Highway -- traveled north as far as the Mississippi at Kaskaskia, going to Ste. Genevieve, and thence went higher up or further down the King's Highway, or by the bridle paths into the interior and Mine Country. In 1802 the expedition under De Lassus, starting south of the Maramac, followed the road to New Madrid.

It should also be noted that one of the first laws enacted, June 20, 1808, by the governor and judges of the Louisiana Territory, was an act to lay out a road from St. Louis to Ste. Genevieve, Cape Girardeau and New Madrid. This road, it can well be said, must have substantially followed the Camino Real, and probably was intended to definitely locate it.