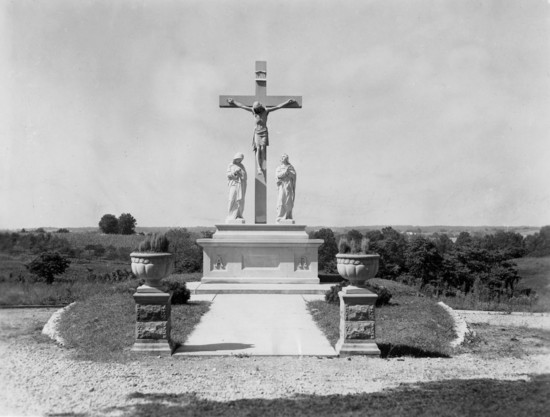 Three generations of my family are buried at St. Mary's Cemetery here in Cape Girardeau. I fully intend to continue that tradition and have already purchased my plot north of Fr. Pruente's crypt (pictured above from the 1930s) and in the same row as my childhood neighbors, Helen and Charlie Burger.

The cemetery is a peaceful place, despite it being so close to Perry Avenue.

It was not such a peaceful place in 1940, however, when it became the center of a dispute between the city of Cape Girardeau and the former city sexton, who was also St. Mary's grave digger.

As early as 1921, Ross Shade dug the final resting places for the dearly departed in Cape Girardeau. He was judged to be dependable with his spade, and all the local undertakers used his services. But over the years, with the changing of leadership at City Hall, he sometimes fell out of favor.

Missourian records show that in April 1931, City Commissioner Phillip Steck told Shade that the city no longer needed him and that he would be replaced by Pete Hamilton. Steck admitted that there had been no complaints about Shade's work and that he had nothing against him. At the time, Schade was caretaker for Fairmount Cemetery, "receiving a salary of $75 per month during seven months of the year for cleaning the cemetery." With the additional money he made digging graves for local undertakers, Shade averaged about $150 a month. From that amount, he paid his help.

Four days after receiving his pink slip from Steck, however, he was reinstated. Shade told the newspaper the "dismissal was the result of a misunderstanding on the part of both men."

But trouble with the city didn't end there. In 1938 Shade was again replaced, this time by Herman Nagle, once more at the behest of Commissioner Steck. Steck said the move was made because of "irregularities," alleging Shade did work of a private nature while employed by the city.

Apparently, the city didn't want Shade digging graves except in city-owned cemeteries. In addition, in reading between the lines, I wonder if the sexton's job wasn't seen as a patronage position, going to whomever the mayor or the other city fathers wanted to reward for their support.

In February 1940, after again being reappointed city sexton, Shade apparently had enough of the City Hall shenanigans and announced his intention to run for city commissioner. However, he apparently never actually filed for the seat, as his name did not appear on the April 1940 municipal ballot.

A month later, it did appear on the Cape Girardeau police blotter, when he was arrested for... digging a grave at St. Mary's Cemetery.

Missourian clippings show that on May 8, 1940, city commissioners passed a new ordinance making it illegal for anyone but the city sexton to dig a grave in Cape Girardeau. On May 21, Shade, again the ex-city sexton, was caught in the act of preparing a grave at the privately-owned Catholic graveyard. An editorial from the Southeast Missourian explained the situation. 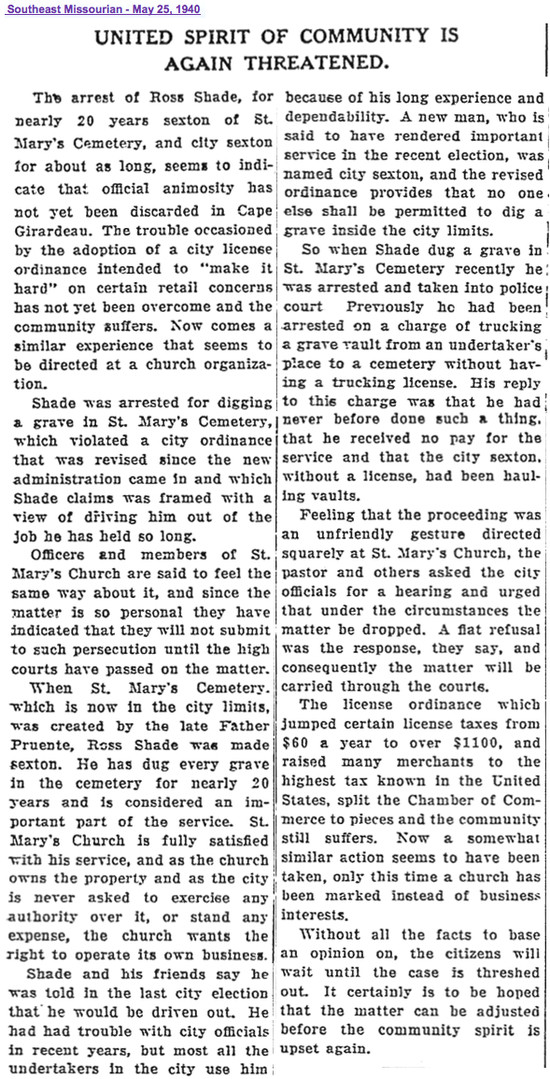 A short time later, at a packed hearing in municipal court, Judge Paul E. Kaiser assessed Shade a fine of $10, the minimum amount that could be handed out for the charge of illegally digging a grave in Cape Girardeau. Shade's lawyer, Judge O.A. Knehans, immediately declared he would appeal the decision to the Common Pleas Court.

Summing up his position, the defense attorney said Shade felt the new ordinance was "unreasonable and unfair." Further, Knehans contended that "St. Mary's Church Cemetery... should have a right to provide their own sexton, and to manage their own affairs."

City Attorney Robert Oliver, however, "declared St. Mary's Cemetery is not private and is subject to public control because of the public health situation. No cemetery except a family graveyard is private within the meaning of the law, the city attorney said."

The article also gives a revealing picture of the state of the city cemeteries:

"(Oliver) said the city, representing the public, can't have many different persons digging graves. One man was designated so that the city can control the making and filling of graves, he stated. The ordinance may seem unfair to the man who was discharged as sexton (i.e. Shade) but not to the public...

"He pointed out that the amended ordinance provides that the sexton, now Claude Kelley, shall file a $200 performance bond, so that the city and those who have burials may be protected. He stated that no adequate records have been kept of burials in Fairmount Cemetery, owned and managed by the city, and that the present administration proposes to see that complete records are kept on all future burials in the cemetery..."

Knehan's attempt to appeal to the Common Pleas Court was short-circuited by his legal opponent. Late in July, "charging that the city (of Cape Girardeau) cannot get a fair and impartial trial in Cape Girardeau (What a statement! - Sharon), Robert Oliver, city attorney, has filed application for a change of venue from Common Pleas Court to Circuit Court at Jackson, in the city case against Ross Shade." His application to the court stated in part, "that the defendant, Ross Shade, has an undue influence over the inhabitants of the city of Cape Girardeau, and therefore the city of Cape Girardeau cannot obtain a fair and impartial trial."

Even while awaiting a new hearing in Circuit Court, Shade couldn't "behave." On Aug. 23, 1940, he was again charged with working at St. Mary's Cemetery. This time, however, he didn't dig a grave, but, according to Shade, merely "placed some greenery at a graveside and did other work." That second case seems to have faded away, with the city failing to file formal information. Perhaps someone at City Hall wisely decided not to pursue this last case of errant tomb decorating.

Fittingly, on Halloween 1940, the appealed case of the city of Cape Girardeau against Ross Shade, by then in the employ of the privately-owned New Lorimier Cemetery, was heard by Judge Frank Kelly in Circuit Court at the county seat. His legal team had grown to include Rush H. Limbaugh Sr.

City Attorney Oliver again presented his argument that the ordinance under which Shade was charged "was a reasonable interpretation of power given the city to regulate practices which might affect the public health."

Knehans and Limbaugh countered that "the city exceeded its authority in adopting such an ordinance, that it could not legally say who should dig graves in privately owned cemeteries. They cited as an illustration that the city, under its new plumbing code, could not legally say that only certain plumbers could do work within the city."

Kelly agreed with the defense, holding that the ordinance was "unreasonable and void." He declared that the "city had no authority under the Missouri law to enact such an ordinance." He also offered the city a glimmer of hope by approving the city attorney's request to take the decision to the St. Louis Court of Appeals. The Missourian's morgue offers no information on whether the city actually did appeal Kelly's decision.

What happened to Ross Shade, you ask? Mr. Shade continued to work as a grave digger in the area until about 1952, when he moved to a farm north of Cape Girardeau. He died at age 71 on July 30, 1957. He was buried at Oak Grove Cemetery at Charleston, Missouri.