I have to admit, when I first read the Republican's 10th Anniversary Edition, I was surprised to learn that at one point Cape Girardeau County was home to eight whiskey distilleries. J.A. Withers' distillery in Allenville outlasted them all.

Here's the writeup from the anniversary edition on the distillery, along with a few other items I found about it and the man who owned it. 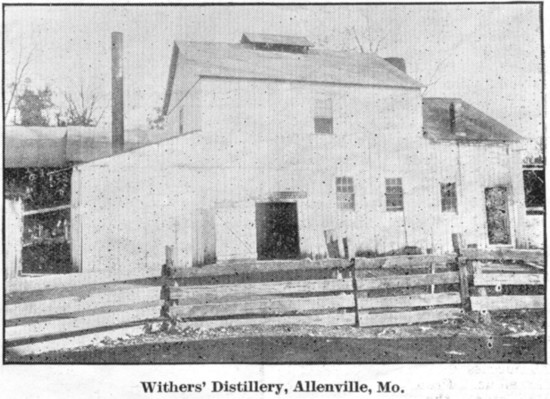 One of Allenville's most distinguished citizens and a man of considerable influences is J.A. Withers, owner of the distillery and vice president of the State Bank of Allenville. He was born in Alexander, County, Illinois, on the third day of May, 1873, his parents being (James M.) and Ellen E. (Moore) Withers. Having received his education in the public schools near his parental home, he served his apprenticeship as a jeweler, and worked in that trade until 1892, when he came to Allenville. Here he followed the same business until 1906, and then bought the present business from J.D. Dameron. He at once prospered, bought the real estate on which the plant is located, and a 160-acre farm in Arkansas, also residence property near Allenville. In 1911 he assisted in organizing the Allenville State Bank, and was later made its vice-president.

His father conducted a liquor factory in North Carolina, and all his forefathers followed the same business, so it was natural that John A. (would)continue in that vocation. He manufactures only one kind of whiskey, and calls it "Withers." He makes a specialty of his three-year-old corn whiskey which has a reputation for its purity.

The business was organized when there were eight distilleries in Cape Girardeau County but his is the only one left in the county at the present time. It was constructed by his father, J.M. Withers. While Mr. Withers makes whiskey and sells it, he himself uses the same very sparingly. He has never permitted any rough house tactics around his place, and there are never any fights or disturbances near his establishment. No accidents nor mishaps, resulting from the use of liquor, have ever happened in this distillery.

Mr. Withers was married to Helen E. Adams on the 26th day of March, 1903, and the happy family consists of the two, and four sons, Roy, Edward E., Adam R., and Waldo, also two daughters, Myrtle E. and Opal A. Mr. Withers has been president of the village board of education. In politics he is a Democrat, and socially a Mason. He owns stock in the Allenville State Bank, and, as aforesaid, is one of its officers.

The family takes delight in taking a spin in the high-power car that Mr. Withers owns and operates. He also enjoys a hunting and fishing trip occasionally, and is regarded as a good fellow by his friends and acquaintances.

This business was established in 1892 by J.D. Dameron, and was continued in his name until 1906, when he retired from business and sold out to J.A. Withers, who has been conducting the same since that time, with signal success.

The plant contains the latest improved machinery, and is one of the most up-to-date distilleries in the state. Annually there are from four to five thousand bushels of corn converted into whiskey, the capacity being about two barrels per day. The products of the "still" find a ready market locally, and in ten states throughout the southern country. A large percentage of the output is disposed of through the mail order route. Nearly every train that pulls out of Allenville carries with it some of the liquor manufactured by J.A. Withers, in jugs or barrels. The business has been very profitable, and has made its owner financially comfortable.

A 1929 article published in the Southeast Missourian notes the "gradual decline of the saloon," no doubt helped along by Prohibition:

"In 1913 saloon keepers agreed to cut out all free lunch, which had long been the main attraction. (Just how freely saloon operators did away with free lunches is debatable. The fact that the Missouri Legislature banned the practice in the spring of 1913 probably had a lot to do with how agreeable they became. -- Sharon) In 1917 only 14 saloons were left in Cape Girardeau and only 21 in Cape Girardeau County. There once had been 33 in the county. In 1918 the saloons cut out beer canning, which was probably the severest blow to personal liberty. Also in 1918 prohibition was voted on, the city going wet by 59 votes, the county by 732 votes and the state by less than 9,000. The great majority of counties went dry but St. Louis saved the day for the wets. In 1919 the Missouri Legislature ratified the Prohibition Amendment, being the 37th state to do so and on July 1, 1920, national Prohibition became effective, all the saloons (and, presumably, Withers' Distillery) quitting business at the same time...

"Bootleggers and booze rowdies kept the country in constant turmoil in the years preceding Prohibition, the records show. Distilleries at Allenville, Appleton, and other places sold liquor at wholesale to all who applied. Individuals also sold home-made liquor under cover. The most notorious fight and general orgy ever recorded in Cape Girardeau County was staged at Allenville when the town marshal, named (O.W.) Hull, fought a barkeeper of Delta over the spoils from gambling and bootlegging. A small circus was at Allenville and the trouble started when the wives of the two men 'jawed' each other during the afternoon performance. The men decided to fight it out and everybody left the tent to see the fight. The men stripped their shirts, prepared a ring in the woods, laid down their pistols and went at it rough and tumble. They fought several hours until both fell exhausted. It was such an unusual affair that St. Louis newspapers sent special feature writers to do it justice, and no other event ever brought more disgrace and condemnation to Southeast Missouri...."

As noted in the Republican's 10th Anniversary Edition, John A. Withers enjoyed automobiles. After Prohibition deprived him of his livelihood, he began selling Chevrolets, becoming one of the proprietors of Cape Chevrolet Sales Co.

In January 1921, Withers was injured in an automobile accident, when his car was struck by a Lorberg Funeral Home ambulance at the corner of Ellis and William streets. 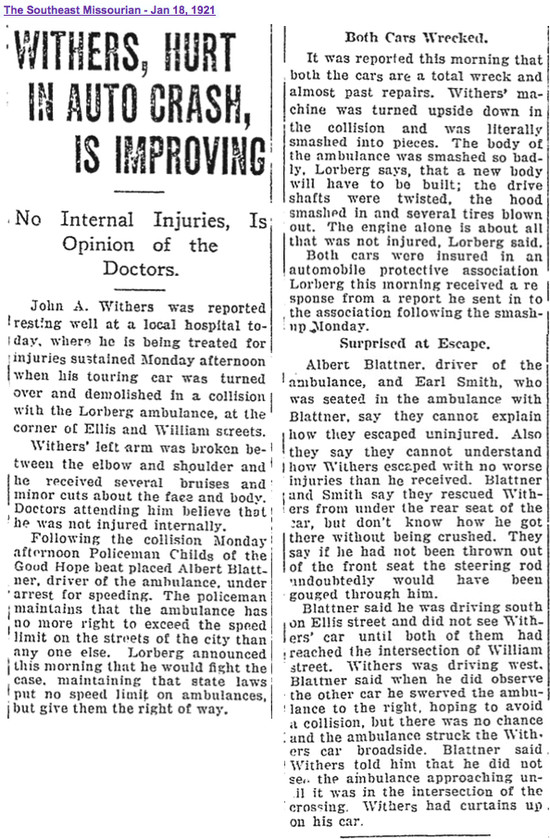 He was released from the hospital about a week later. How well he fared after that, the Missourian files don't say, but his death came only four years later. Curiously, his obituary doesn't mention his years as a whiskey maker in Allenville. 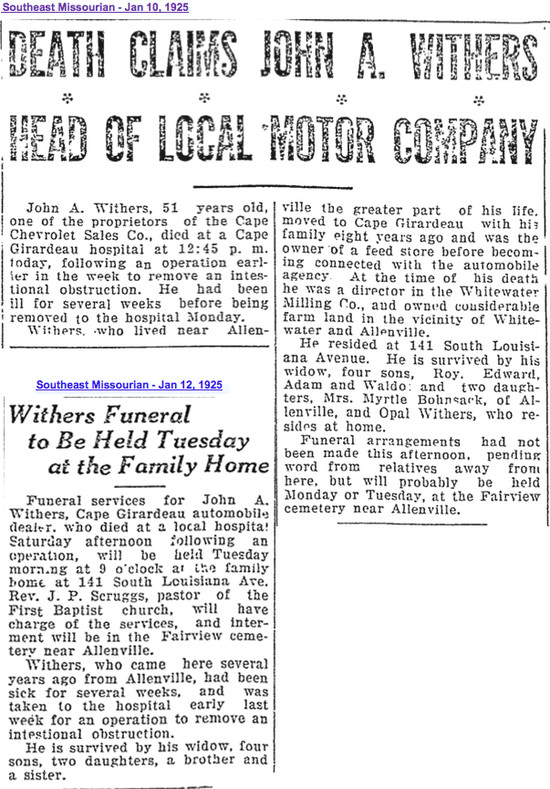 His widow survived him by 32 years. 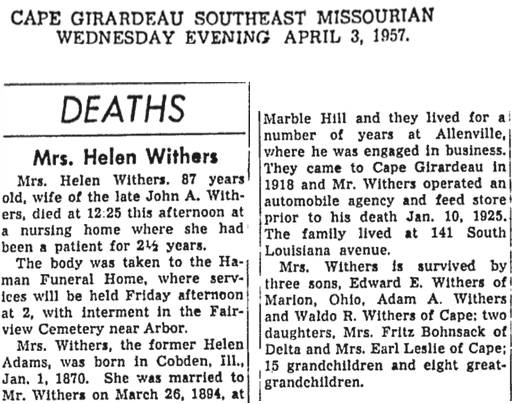