Last year, the Southeast Missourian observed its 110th anniversary. Our special section commemorating the start of this publication didn't appear on the actual anniversary, Oct. 3, but rather was published several weeks later.

The Naeter Brothers, who began publishing this newspaper in 1904, also celebrated its 10th anniversary with the printing of a special section. However, they waited until Feb. 27, 1915, to publish the edition. The publishers offered this explanation for delaying the section: "When this edition was thought of, it was the intention to issue it Oct. 4, 1914, the tenth anniversary, but it was then decided to have it cover the 10 years dating from Jan 1, 1905, to Jan. 1, 1915, because this paper did not get a start, and the Cape hadn't got well under way until the beginning of the year 1905."

Some of you may be familiar with this edition. A number of years ago, the Jackson Heritage Association re-published it as a fund raiser. For those of you wondering if your copy is an original 1915 edition or a reproduction, it's easy to tell them apart. The reproduction was published without the original cover, which was brown and orange and featured a photo of The Daily Republican building. Another easy way to tell if you have "the real thing" is that the 1915 version was printed on slick paper; the reproduction was printed on newsprint.

The anniversary edition is a time capsule, offering a glimpse of how things were in Cape Girardeau County in 1915, with great emphasis placed on the histories of county towns and businesses. I thought I would reproduce some of the more interesting articles in this space, scanning original photographs from the edition where possible or substituting similar ones. The first story I've selected is about a Jackson dry goods emporium. 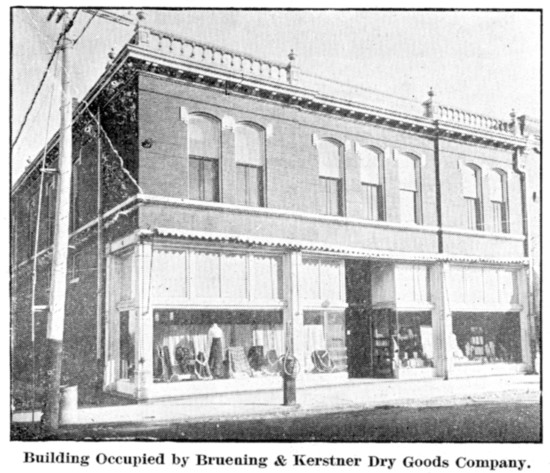 This business was established in 1896 in a small building, and is now located on the corner of Main and South High streets in the largest business building in the city of Jackson, occupying two floors and basement. At the beginning the two partners (William Bruening and Albert W. Kerstner) were sufficient to wait on the trade, but now a large force of clerks is constantly maintained.

Besides a full line of dry goods and clothing, the firm handles staple and fancy groceries, and the second floor is filled with furniture and stoves; in fact, is a furniture store within itself. This department is under the supervision of an experienced furniture man, and every other department n this large establishment is headed by competent superintendents. All kinds of produce is bought in exchange for goods. The shoe department of this great store is stocked with the best footwear that can be obtained on the American markets, and kept up in all its branches as the trade demands.

The building is equipped with modern conveniences, such as heating plant, electric lights, water, freight elevator, cash carriers, etc. A plate-glass front adds to the appearance of the place and gives a fine opportunity for window displays, which are always attractive and neat.

The firm name of Bruenig & Kerstner Dry Goods Company has become a household word with the public, and the reputation of the concern extends far beyond the confines of Cape Girardeau County. The name of the progressive owner stand for honesty and fair dealing wherever they are known, and both enjoy an enviable reputation in the business world of the city and county.

That success will finally come to him that strictly applies himself to business has been fully demonstrated by the man whose name appears at the head of this article. Although not a native of this country, strictly speaking, as he was born three years before his parents immigrated to America, he has all the qualities of a shrewd American business man and staying propensities of the same. After his parents left their home, Brokoloh, in Hanover, Germany, William Bruening, who was born there in 1863, on the 3rd day of November, was brought to the United States in 1866. Henry Bruening and Rosetta (Eggers) Bruening, the parents, settled near Gordonville and soon after young William attained the age of 6 years, sent him to the Lutheran parochial school near their home, at the Zion church. Later William attended in succession the public schools, the Cape Girardeau Normal, and the Teachers' College at Addison, Illinois. He held a position as clerk in a general merchandise establishment and taught school for several years.

On Oct. 29, 1893, he was married to Bertha Sebastian, and has an interesting family of eight children, three sons, William, Paul, and Walther, and five daughters, Stella, Elsa, Alma, Helene, and Pauline.

He is also a stockholder in the People's National Bank and the Jackson Building and Loan Association, member of the Jackson Commercial Club, and has several terms been a member of the Jackson Board of Education and its president. He has been a lifelong Lutheran, and in Politics is a Republican. During his very few spare hours he seeks recreation in the world of harmony.

Among Jackson's eminently successful business men A.W. Kerstner stands in the front ranks. Born at Gordonville on the 30th of December 1873, his father, Henry Kerstner, and his mother, Auguste (Ahrens) Kerstner, sent him to the parochial Lutheran schools near Gordonville in early childhood, and after finishing that course he entered the public schools of that town. Having attended there he took a short course in the Cape Girardeau Normal, after which he began work as a clerk in the general store of his father in his home town. In February, 1897, he began business in Jackson on his own account and in partnership with William Bruening, opening a small mercantile establishment, which has grown to large proportions, the firm being known all over this section as one of the most reliable in the county.

On May 3, 1896, Mr. Kerstner was united in marriage with Miss Emelia Schneider, who is the daughter of Judge and Mrs. William G. Schneider, and this union is blessed with one daughter, Gertrude. He and his family are members of the Lutheran church, and are socially prominent in their home city.

Mr. Kerstner is the president of the Bruening-Kerstner Dry Goods Co., and under his supervision the large business runs along smoothly and successfully. He is a stockholder in the People's National Bank of Jackson, an active member of the Jackson Commercial Club. He owns residence property on Russell Avenue, and was at one time devoted to the raising of fine poultry on his premises. He owns an automobile, and his hobby is to drive the same along the fine highways at a leisurely gait. He can be counted among the "live ones" in Jackson, and among the most enterprising of its citizens. 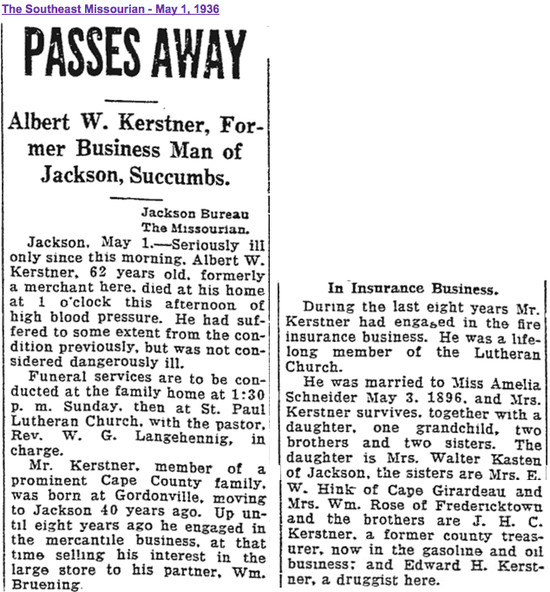 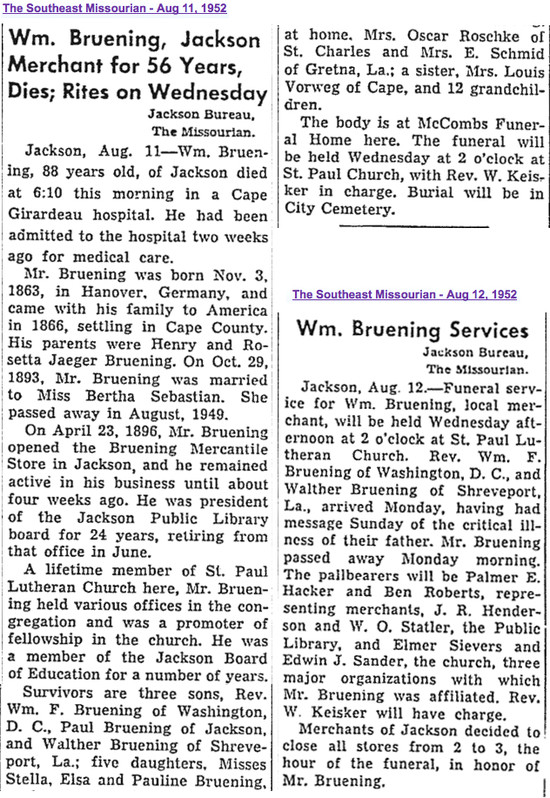