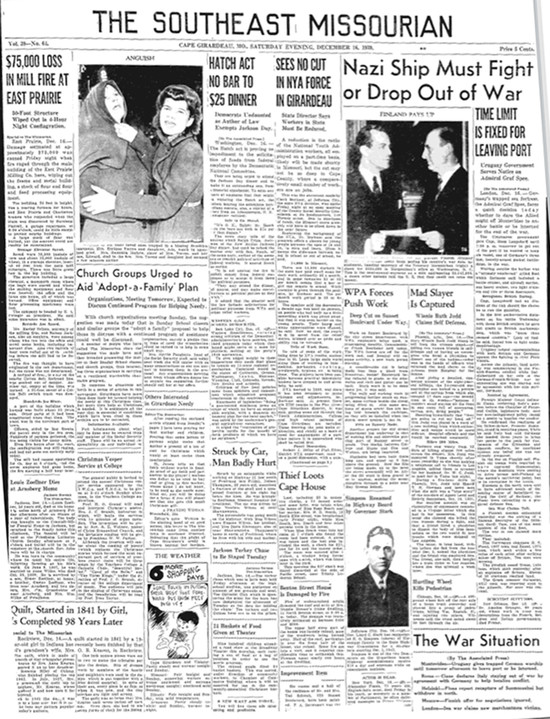 I never know what I'm going to find as I page through the old issues of the Southeast Missourian, looking for items to use in the daily "Out of the Past" column. Dec. 16, 1939, struck me as having some interesting items.

The front page was filled with news about the war in Europe; a huge fire at East Prairie, Missouri, that destroyed a flour milling operation; prospects for employment through the National Youth Administration and the Works Progress Administration; the capture of a "mad (female) slayer" in Phoenix, and efforts locally to feed and clothe the needy.

Tucked away in the lower left hand corner of the page was an interesting item about a quilt:

Special to The Missourian.

ROCKVIEW, Dec. 16. -- A quilt started in 1841 by a 19-year-old girl in Indiana was recently been finished by that girl's grandson's wife, Mrs. O.B. Kerns, in Rockview. The quilt, which is made of thousands of tiny triangular pieces, was begun by Mrs. Anna Kearns. She passed it on to her daughter, Mrs. Rebecca Miley of Oblong, Ill., who finished piecing the top in 1902. In July 1937, Mrs. Miley presented the quilt top to her nephew, Mr. Kearns, whose wife quilted it and now uses it for a bedspread.

Back in 1841 the design was known as a lone star, but it is not the lone star pattern popular with today's quilters.

One inch square pieces were cut in two to make the triangles put into the design. Bits of dresses worn by members of the family and neighbors were used in the design, which is put together with a blue dotted material. In spite of their age, every piece is as firm as when it was new, and the tiny stitches are tight and strong.

The quilt was so large that Mrs. Kearns took seven inches off each side. Even then, she had to use seven yards of cloth for the lining.

Here are some of the other advertisements and articles that drew my attention in the Dec. 16, 1939, edition.

This ad shows that the Rainbow Room in the Idan-Ha Hotel was under new management. Eldon Bone and his wife, Muriel, operated the hotel for around 20 years. 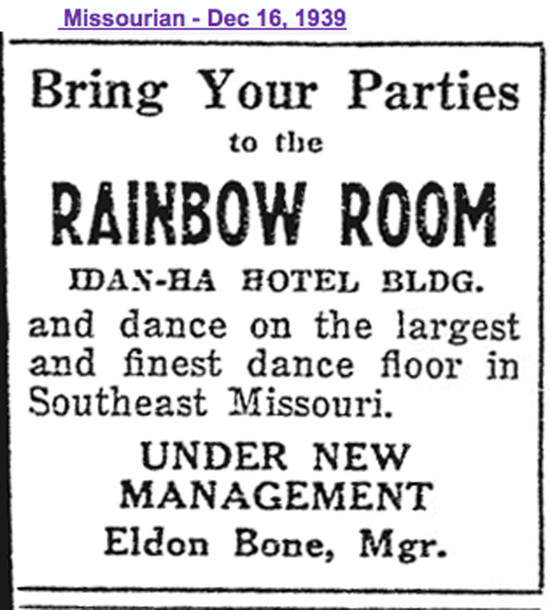 Then there's this small item about mules. These aren't just any mules. They're publicity-seeking mules. They seem to have made a habit of appearing in the pages of the Southeast Missourian. I wrote about them before in this space.

Three years before this 1939 item appeared, the mules made the front page of the local newspaper, when Jim pushed his partner Blue into the swimming pool they were helping to dig at St. Vincent's College in Cape Girardeau. You can read about the happy ending here: http://www.semissourian.com/blogs/fromth...

In the 1939 incident, the mules, no doubt at the instigation of Jim, wandered away from the college and attempted to adopt farmer L.F. Hunze. Hunze sheltered and cared for the animals until they could be persuaded to return the Vincentian Brothers. 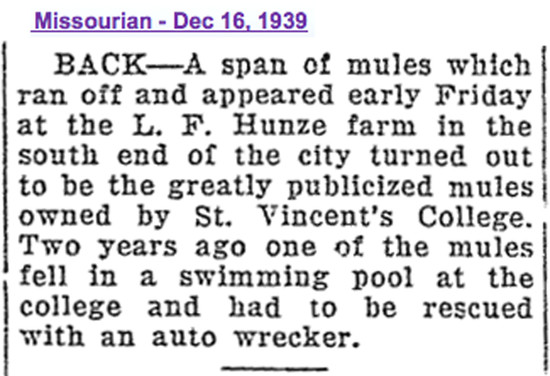 Here are another couple ads that caught my eye. 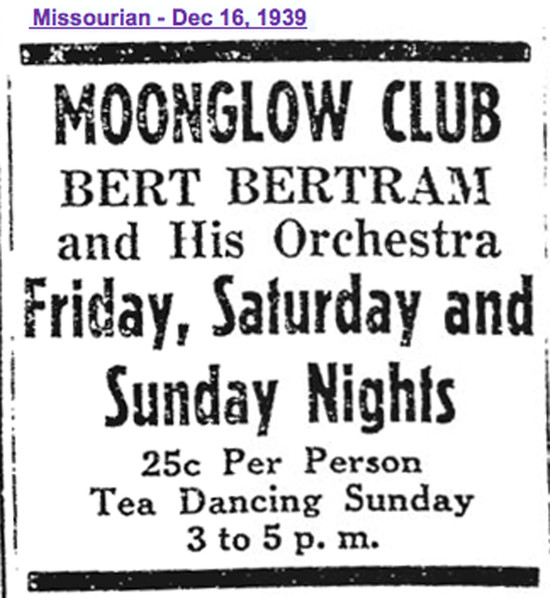 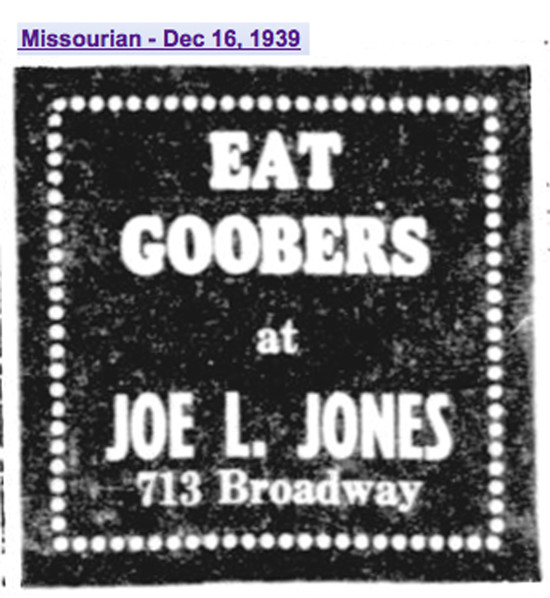 I've heard of Moon Distributing, but not the Moonglow Club. However, Joe Jones' place on Broadway was a popular hangout. For years he operated it during the warm months of the year, at times with his son, Oda. For such a landmark in Cape Girardeau, there is very little in the Missourian archives about the business. Even Joe Jones' obituary in 1978 simply says he once owned an eating establishment on Broadway.

The elder Jones was a retired Frisco lineman. Perhaps he was looking for a safer line of work, when he opened his eatery in 1921. Our records show he was injured a couple times while working as a lineman. In an 1918 incident, he was knocked from a telegraph pole near St. Louis by a live wire and severely burned.

In April 1921 he purchased the newspaper stand at the old Frisco depot at the foot of Broadway, on the riverfront, and had it dragged on a sledge to "West Broadway," where he intended to conduct a soft-drink stand. In 1929, he opened in a new building constructed at the site of his old stand, 715 Broadway. Our records don't say exactly when he stopped selling his popcorn, soda pop, and goobers, but it was likely after April 1952, when he broke a hip in a fall, the same hip he broke seven years before.

In that same 1939 edition, I found an anniversary writeup. I'm unfamiliar with the surname, but perhaps some of my readers will know the couple.

Finally, there were two items about an upcoming concert to be held at the Sikeston, Missouri, armory. What makes the items interesting are the performers: Duke Ellington and his orchestra, along with Ivie Anderson.