As an amateur genealogist, I've spent some of my best days in cemeteries. I love walking the rows of markers, reading the inscriptions and pondering the lives lived.

I suppose it's natural, too, that I enjoy stories of the odd happenings that surround cemeteries and burials. This first example left me wondering, "Why would anyone steal a 300-pound grave marker?" 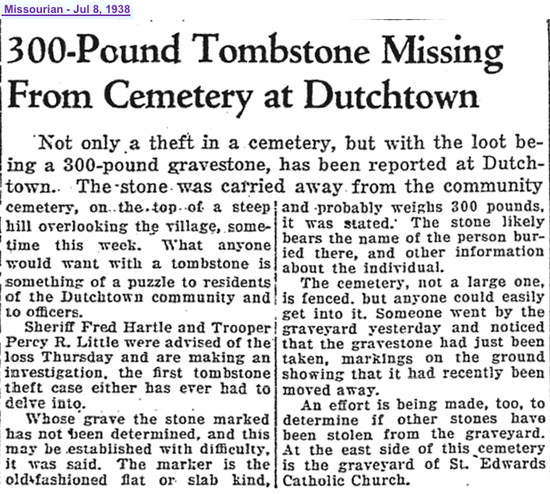 Now, a 300-pound stone isn't something that an ordinary person can just heft and toss in the back of a pickup. It's a mystery still looking for a solution, as far as I know.

And then there's the tale of the Jackson physician -- unnamed, of course -- who took his own life. I've often heard stories of suicides and the un-baptized being buried outside Catholic cemeteries. But as the graveyards grow, they surround the burials that were, at first, shunned. In the case of the Jackson physician, he was buried on the wrong side of the fence and the wrong-way around.

Finally, the story about the final obsequies for Capt. Edmund Gray Jr., founder of Gray's Point in Scott County, Missouri.

Gray was born in 1834 in Ohio, but as a boy he was brought to St. Louis by his family. While still a youngster, he began to serve under his father and brothers, who were riverboat pilots. Young Gray took to the life like a fish in water. His obituary states that he "soon became so efficient that he was given a pilot's papers before reaching his majority."

Gray served as a pilot or captain of riverboats for the Anchor Line out of St. Louis until 1898. At that time, he gave up the longer hauls and began running the transfer boat at Gray's Point until the Thebes, Ill., railroad bridge was completed.

Not only was Gray a longtime steamboat captain, he was also a longtime Mason. He held membership in the St. Mark's Lodge A.F. & A.M., in Cape Girardeau for over 40 years. And it was to his Masonic brothers that he turned when he planned his last rites. This excerpt is from Gray's obituary in The Daily Republican newspaper on Wednesday, Feb. 28, 1912:

"When his son, Charles W. Gray, came to the Cape Tuesday, to arrange for his (father's) funeral he called on the secretary of the Masonic lodge, W.H. Huters, and was surprised to be told that for 25 years a paper had been in the archives of the lodge containing instructions as to his father's burial.

"A quarter of a century ago Captain Gray gave into the hands of Henry Pott, treasurer of St. Mark's Lodge, written instructions as to his burial.

"Captain Gray was a clean man in his thoughts and in his person, and this prevailing trait showed strong in his directions for his interment. He requested that he be clean shaven and thoroughly cleansed after death and that he be interred in a grave six feet deep, his body being encased in concrete that would completely envelop him; that the ropes which lowered his coffin to its last resting place should be dropped on the casket and they, too, be encased in the concrete covering. He desired that a tablet bearing his name and time of death, a photograph of himself and a small Bible be placed in the coffin beside him. He also requested that his body be buried beside the grave of a beloved daughter who died many years ago, and that interment be at midnight."

The next day's edition carried a story that stated Capt. Gray was buried as he had instructed the previous midnight.