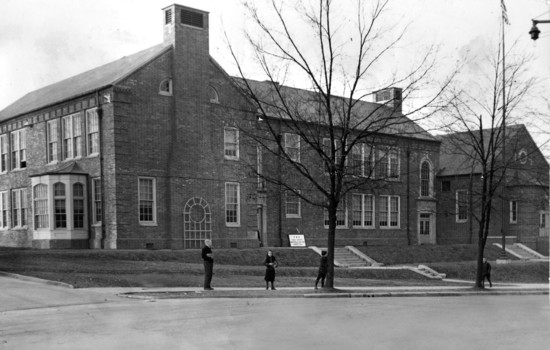 If you're a faithful reader of the "Out of the Past" column, which runs daily in the Southeast Missourian and on this web site, you've probably been following the progress of construction of the new Lorimier School on Independence Street 75 years ago.

The story actually began in 1928, when the school board decided to abandon the original Lorimier School, built in 1871, because of safety issues.

A tour given a Missourian reporter by school board president Albert M. Spradling reinforced the notion that the school was unsafe. According to a newspaper story, they found "that the southwest corner of the study hall is sinking, and has shifted its position by several inches.

"That large cracks in the brick work are apparent on all sides of the building, especially on the south.

"That the floors quiver with the least motion, and that a man can rock an entire room just by his weight.

"...An investigation showed that the roof leaks in a number of places, and the whole interior is badly in need of redecorating. Plastering has fallen in a number of rooms."

On Aug. 29, 1928, the school board voted to close the school and move all its equipment to the Broadway School.

Apparently, Old Lorimier wasn't on the threshold of collapse, as one might conclude from the description of the old building. In fact, it remained standing until 1935. Before laborers with the Works Progress Administration could begin tearing it down, eight or 10 squatter families had to be evicted. The site was then cleared and leveled, ready for a new school that wouldn't be built for two more years.

Ground was broken for "New Lorimier" on Jan. 6, 1937. Teacher/principal May Greene, for whom another school in Cape Girardeau was named, turned the first shovel full of dirt. 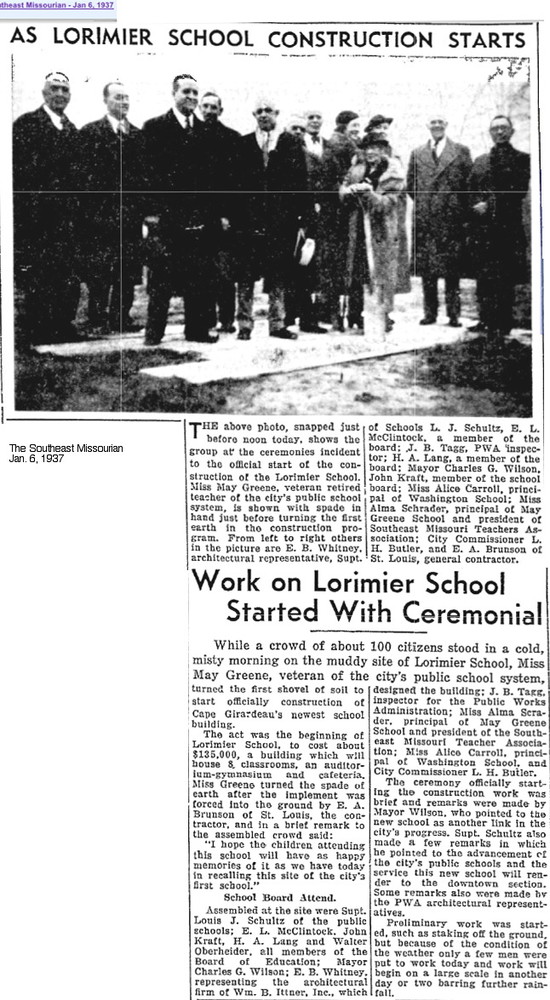 "Out of the Past" entries show how quickly construction then progressed:

Sheets of parchment bearing signatures of former pupils of Lorimier School will be included in a box to be placed in the cornerstone of the new school; papers will be placed in banks, at the Missourian and elsewhere, allowing those who attended Lorimier to sign their names.

The cornerstone for the new Lorimier School is placed in an afternoon ceremony; with a large number of leading educators of the community and district participating, current and historic papers are sealed into the two-foot Bedford limestone block, which is installed in the main wall of the structure, just to the left of the main entrance to the new school.

When the new Lorimier School opens in the fall, it will accommodate 320 pupils, which should relieve crowding in other schools of the system; construction work on the news brick school is moving steadily forward; Brunson Construction Co. plans to pour concrete for the second story floor next week.

With 45 men working, the Lorimier School construction job is moving forward, the exterior taking shape rapidly; framework for the roof over the west wing, which covers the gymnasium, is being placed at present.

Roofing of Lorimier School by the E.A. Brunson Construction Co. is nearly half done; inside, workers are laying the floor of the gymnasium, and plastering should be started this week.

Contracts aggregating $9,875.75 for furnishings at Lorimier School were let yesterday by the school board; the largest contract went to E.a. Holscher Office Furniture Co. of St. Louis, which includes window shades, seats and miscellaneous furniture.

The Cape Girardeau School Board has decided to close Broadway School when new Lorimier School opens in September; all but 75 of Broadway's pupils were scheduled to move to new Lorimier anyway; those remaining students will be absorbed into Franklin, Washington and Jefferson schools.

Workers pour concrete for a drive at the east side of Lorimier School, and next to the S.D. McFarland residence; the drive leads to that property and to the rear of the new school, connecting with Independence Street at Fountain Street.

Finally, on Sept. 7, 1937 -- 75 years ago tomorrow -- New Lorimier School opened its doors for the first time to students. It wasn't quite finished, but enough of the equipment had been installed to make classes possible.

Dedication of the new facility was delayed until January of the following year: 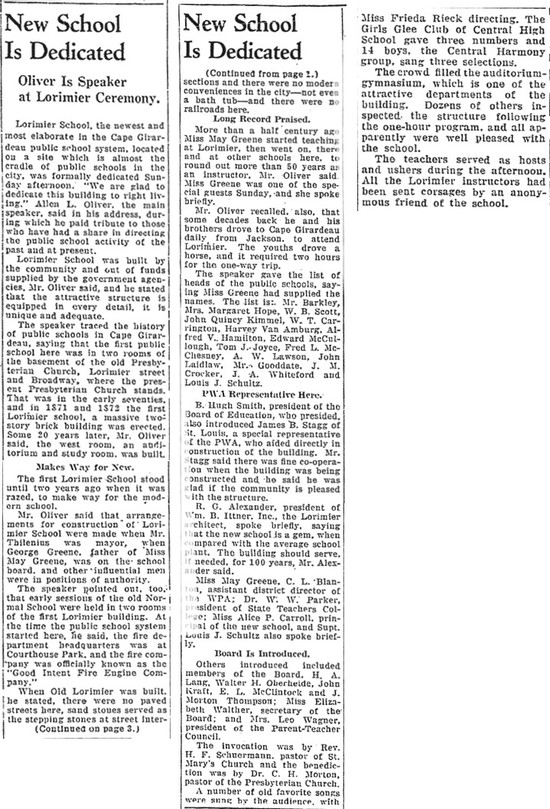 The school named for this city's founder continued to be used through 1976. After much debate, the structure was then sold to the city of Cape Girardeau. It was renovated and became the town's city hall.

Maxine Busch Boren, who was a member of the inaugural class of New Lorimier School in 1937, volunteered her memories of the first days of the school. 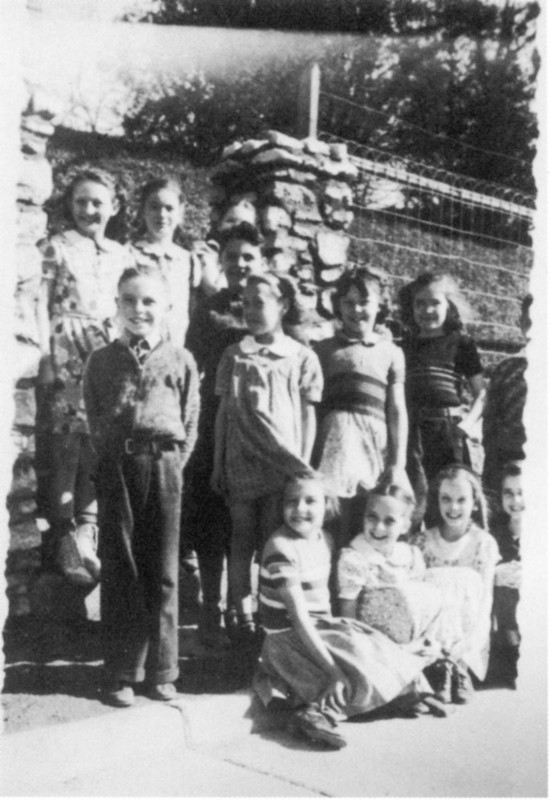 My 10th birthday, Sept. 6, 1937, was a great day for me. It was the opening of the newly built beautiful Lorimier School.

The new school was great, with the first floor being for the younger children. Mini bathrooms and mini water fountains with tile nursery rhymes.

All the teachers were young and unmarried ladies. Married lady teachers could only be substitutes. Hal B. Lehman was the only male teacher.

I have so many good memories of the school and all the good friends I met there. There are not too many of us living, but a few of us are.

Every Spring when we had Play Day, we would always do the May Pole Dance.

I have always felt lucky to have been educated in the Cape (public) schools and also luck to have lived my entire life here in Cape. Everything has changed so much through the years. I think I would like to go back to the olden days as I had a wonderful life growing up living here in Cape.

I lived at 220 N. Lorimier and went to Lorimier School. The Courthouse Park was our playground and in the summer they would let us play in the water fountain.

I met my husband Gerald at Central 69 years ago and have been married 65 years. Had two sons, Nick and Steve, and they both were educated in the Cape (Public) School system. My two granddaughters Courtney and Stephanie also went through the Cape schools.

There has never been another school built here in Cape as beautiful as Lorimier.

P.S.: My granddaughter Stephanie Boren Wessell is a teacher at Clippard School. My granddaughter Courtney Boren Landgraf is a nurse at Saint Francis Medical Center. They both got a good education through the Cape (Public) Schools. 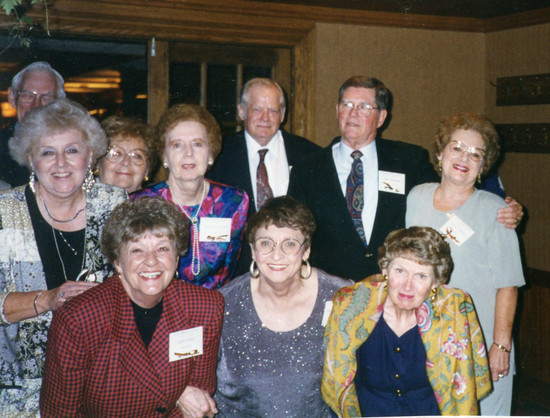