The last of the proud steamboats to be named for the city of Cape Girardeau met its demise in a steady downpour, not plying the waters of the Mississippi River, but moored at St. Louis just above the Eads Bridge.

On Dec. 2, 1967, the steamer -- then called the River Queen -- slid slowly into the water. Two days later, a photo of the boat and the story of its sinking appeared on the front page of the Southeast Missourian: 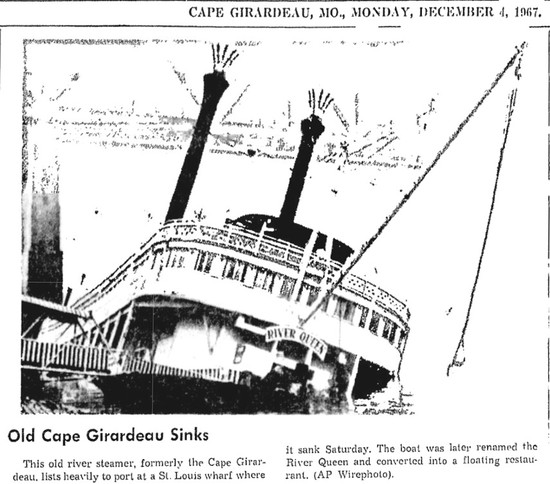 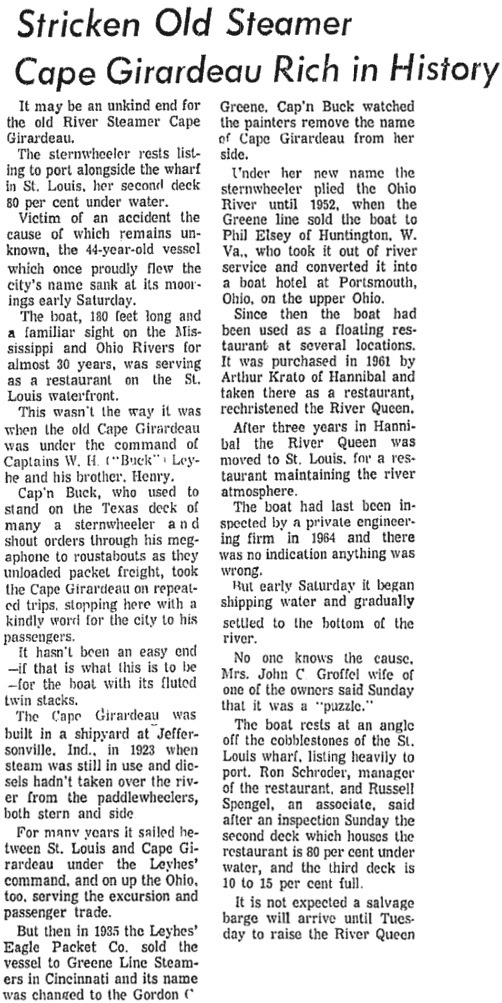 Despite efforts to salvage the steamer, the Queen couldn't be saved. According to steamboats.org, its hull can still be seen when the river stage is low. The website -- http://www.steamboats.org/history-education/greene-line-steamer-gordon-c-greene.... -- has a good history of the boat, as well as photos of it in its heyday and as a ruin.

The River Queen/The Sternwheeler/Sarah Lee/Gordon C. Greene/Cape Girardeau was the third steamboat operating on the Mississippi River to bear the name "Cape Girardeau." The first had been the Bald Eagle. It was renamed the Cape Girardeau in 1901, and continued under that moniker until 1910, when it sank off Turkey Island, south of St. Louis. The Eagle Packet Co., which owned the packet, almost immediately put the Spread Eagle in the St. Louis-to-Cape Girardeau run, and it became the second Cape Girardeau. That boat, too, succumbed to the river, sinking five miles north of Chester, Ill., on Oct. 21, 1916.

On April 23, 1924, with Capt. William "Buck" Leyhe barking orders from the upper deck, the third and final steamer Cape Girardeau docked here for its christening ceremony. A crowd of more than 5,000 persons jammed the wharf to welcome the town's namesake. It was christened by Mary Christine Rolwing, a 16-year-old Thebes, Ill., girl, who broke a silver-encased bottle against the boat's bow.

The boat continued to serve this town for the next dozen years. In 1932, however, its years of churning the muddy waters of the Mississippi ended, when it was placed in the tourist trade on the Illinois rivers. Eagle Packet finally sold the boat to Greene Line Steamers of Cincinnati, Ohio, in 1935.