As one of Fred Lynch's blog contributors recently noted, there once was a Catholic church in Dutchtown. The Diocese of Springfield-Cape Girardeau's history of the Southern Missouri diocese -- "The Catholic Church in Southern Missouri," published in 2005 -- contains histories of each parish in the diocese. However, St. Edward's is barely mentioned.

Only a brief item in a listing of parishes established before the diocese was erected in 1956 gives any information on St. Edward's. According to the list, the Dutchtown church was formed in 1898 as a mission church. At first, priests from Immaculate Conception parish in Jackson attended to parishioners' needs, but over the years those responsibilities were shared among priests from Chaffee, Advance, and St. Mary's at Cape Girardeau.

Because of a shortage of priests, Bishop Ignatius Strecker ordered the church closed in 1967. The parish was merged with the same churches whose priests had attended it over the years. Here's a shortened version of the story about the closing of the St. Edward's, published on the front page of the Missourian Aug. 21, 1967: 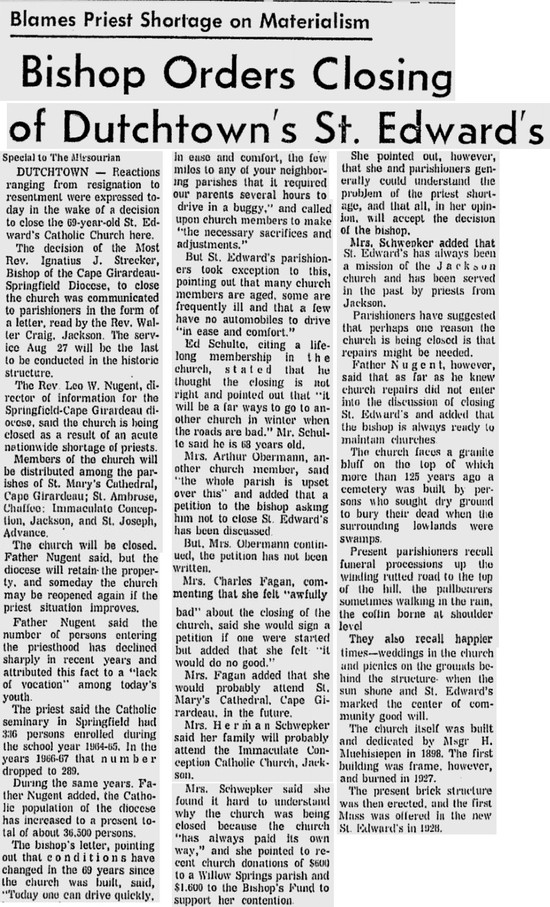 One small note of correction concerning this story. It says that the original edifice, a frame structure, was destroyed by fire in 1927. However, that church burned Jan. 29, 1928. Here's a story about the conflagration:

By August of the same year, a new St. Edward's was dedicated and in use.