Since Fred Lynch began writing his popular blog -- f/8 and Be There -- he's challenged my research abilities. Three times a week, Fred features old photographs taken in Cape Girardeau and the area, most by long-time Missourian photographer G.D. "Frony" Fronabarger.

On occasion he will use an older image. Such was the case on July 4, when he featured a picture made in 1919 of the original swimming pool in Fairground Park.

You can click here to see the picture and read the blog.

Fred and I studied that photo a long time, trying to place its location in modern Capaha Park. We finally concluded the picture was made north of the pool, looking south toward Broadway. What threw us was the large structure in the upper right corner of the print.

Our first thought was that it was the original Southeast Missouri Hospital, but in 1919 that facility didn't exist.

I contacted Sally Owen, who works at Southeast and is that institution's unofficial historian. She pointed out that there was a farm house on Lacey Avenue before the hospital was constructed. She was even kind enough to send me a well-written booklet that chronicles the hospital's history.

Using her information, I was able to track down a Southeast Missourian story announcing plans for the hospital and, toward the end of the article, talks of the moving of a building from the site. The story was published Sept. 23, 1926: 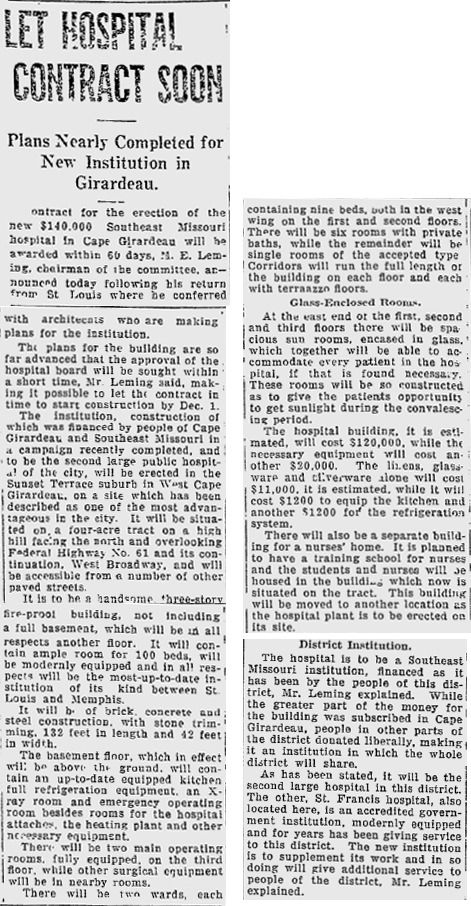 Sally's booklet explains how the site was cleared:

"After the (Ben) Greene farm was purchased for the hospital site, local contractor A.H. Gerhardt was charged with the responsibility of moving the two-story frame house down the steep hill, where it was to serve as the nurses' quarters. The lane leading up the hill to the house was unpaved and bumpy, and the house proved to have a mind of its own on moving day, breaking loose from its rollers and bouncing down the hill on its own momentum. Where it stopped [surprisingly, none the worse for wear] became its permanent location."