As I was hunting for an item about the opening of the Chaffee municipal swimming pool in 1936, I stumbled across the photo of a forgotten Cape Girardeau legend: Fred L. "Pop" Stacy.

Anyone who swam the waters of Cape Girardeau's Capaha Park pool in the 1920s and '30s knows exactly who I'm talking about. Stacy reigned over the pool as lifeguard from the early 1920s to his retirement in the mid 1930s.

The exact years of his employment with the city are confusing, with various articles giving different dates. While his obituary in December 1948 indicates he resigned in 1934, a story published in 1935 noted that he had completed his 14th year as lifeguard. The story continues: "Mr. Stacy, who is 73 years old, estimated that during his time as lifeguard, he has watched over approximately 1,000,000 persons swimming in the pool and that, while no one was drowned, he has had to take approximately 1,000 persons out of the pool for some reason or another. He has missed only a few times being present when the pool was opened." 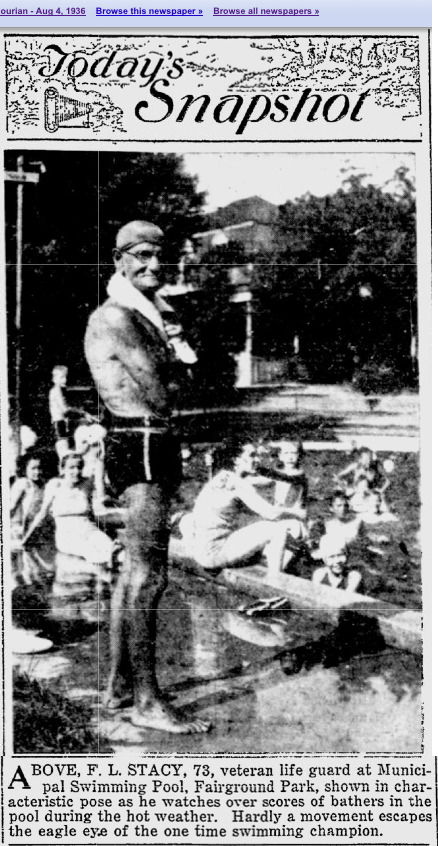 Before coming to Cape Girardeau in 1918, Stacy had a career as a railroad engineer, both with the Illinois Central Railroad and the Cotton Belt Railroad.

His larger-than-life reputation was enhanced by his real-life heroics. Working for the I.C.R. in 1893, he prevented the robbery of a passenger train headed for the Chicago World's Fair. The Missourian published a front-page article about the incident on June 27, 1933: 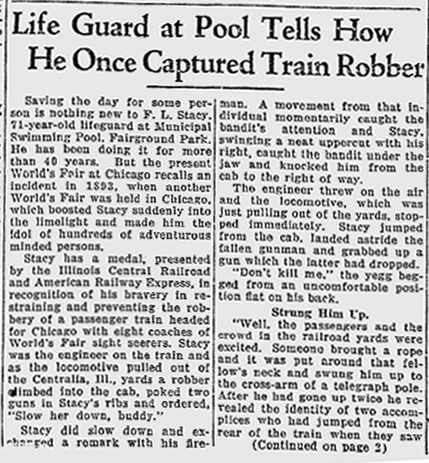 Aside from saving lives and capturing hoodlums, Stacy had another claim to fame. He was the father of Jess Stacy, noted jazz pianist, who played with the Benny Goodman Orchestra.