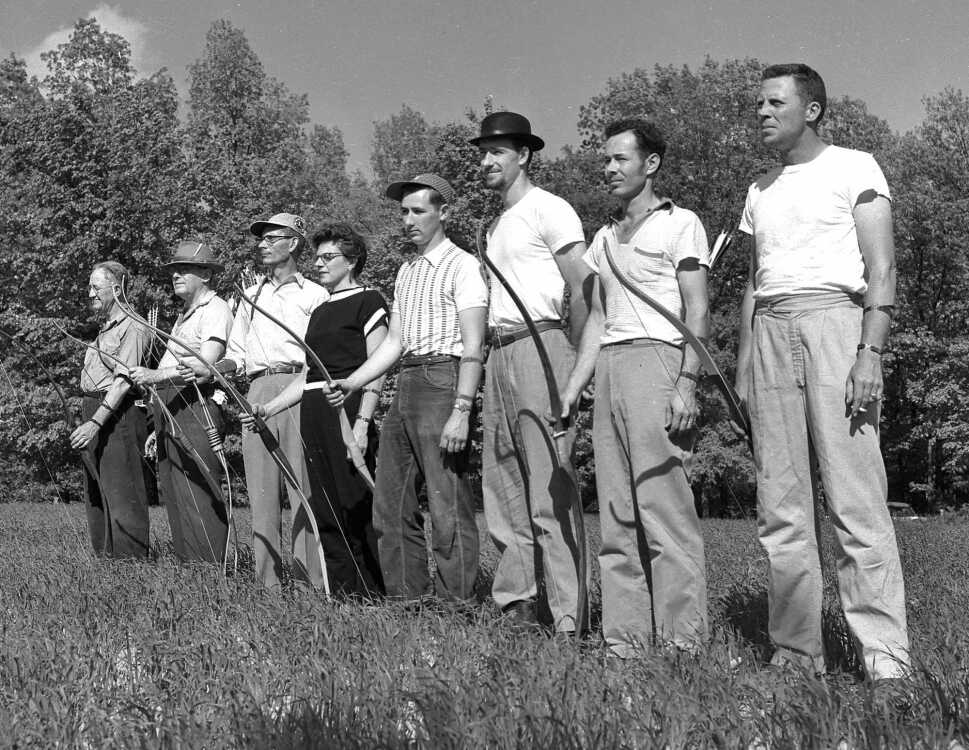 Order this photo
Craig Watkins of Justin, Texas provided this information: It's a photo of the winners of one of The Bootheel Bow Hunters events in the mid to late 50's. The man on the left is Ellis Trickey. The woman is my mother, Annabel S. Watkins. The man on the right is W.T. "Bill" Watkins, my father. He owned the Watkins Shell Station on the S.W. corner of West End Blvd. and Independence. About the same time he and T. J. Mulkey started The Country Store on West End next to the Sunny Hill Dairy. I recognize the two men next to my father, but not sure I have their names correct." Bruce Watkins adds: "Also the guy with the black hat is John Boardman who was a renowned architect in Cape Girardeau." (G.D. Fronabarger photo)

The Bootheel Bowhunters Club was a group of archery enthusiasts in the 1950s and 1960s in the Cape Girardeau area. A few items were found in the Southeast Missourian's Out of the Past archives.

Don Eastwood of Chaffee, Mo., was presented the club's big game trophy and Clinton Kasten of Jackson the Order of the Bone trophy at a recent meeting of the Bootheel Bowhunters Club.

Barry Hazen is the best archer in the state of Missouri, having swept to a smashing triumph in the state championship tournament at Rolla, Mo., over the weekend; while Hazen was taking the big title, nine of the 15 representatives from Southeast Missouri's Bootheel Bowhunters Club placed in the top three of their respective classes.

One of southeast Missouri's and Cape Girardeau's newest sporting facilities will have a grand opening Saturday night.

The Bootheel Bowhunter Club's indoor archery range in the 800 block of Broadway is already in business, but this weekend there will be a special welcome to guests. The range is located in an upper floor building over the RCA Electronic Supply store on Broadway.

All archers are invited to shoot at the range, although private equipment must be brought with the shooters. Later the club plans to have rental equipment available.

A non-member of the Bootheel Bowhunters Club must pay $1 per round (28 targets are 120 shots). An archer connected with another bowhunter club must pay 75 cents per round and local club members 50 cents or $4 a month.

The club also operates a scenic outdoor range for shooting in fair weather. The old range is being replaced by a new one on Cape Rock Drive, which should be ready, for club members only, in mid-April.

When weather is not perfect for outdoor shooting, as well as for those who like to shoot at night, the indoor range will remain open the year around. Hours are from 7:30 to 10 each night, club members taking turns managing the range.

In addition to the 10 shooting lanes, there is a lounge and kiddies' room for those family members not shooting.

Business at the indoor range is already bustling. There are leagues, which shoot on Tuesdays and Wednesdays.

The shooting lanes are fixed to have six different shooting distances each. On a round, an archer shoots four arrows each at the six-inch target from 20 feet, 10 yards and 15 yards and four at the 12-inch target from the 20-yard, 25-yard and 30-yard distances. Then he takes one more shot at each target from the farthest point to the closest in what is called a "walk-in." Four of these series make up a round.

Dennis Gibson of Cape Girardeau "Robin-Hoods" an arrow while shooting at the indoor range of the Bootheel Bowhunters Club; Gibson's second arrow splits another arrow already in the target center. 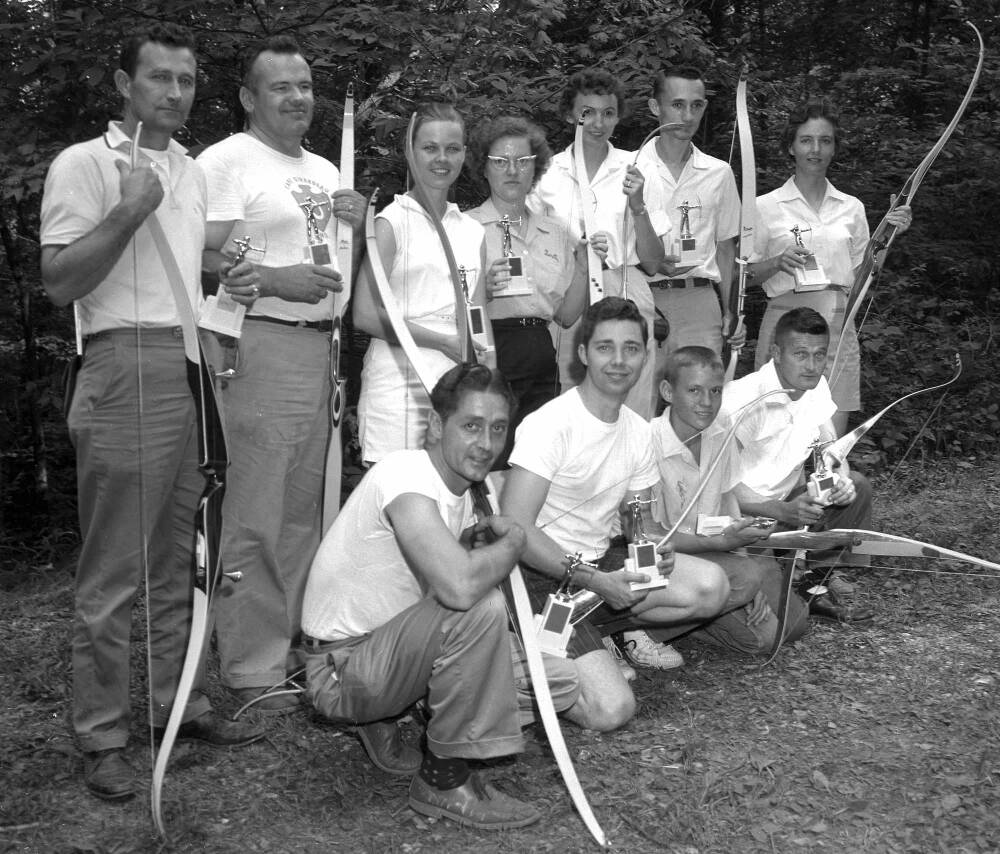