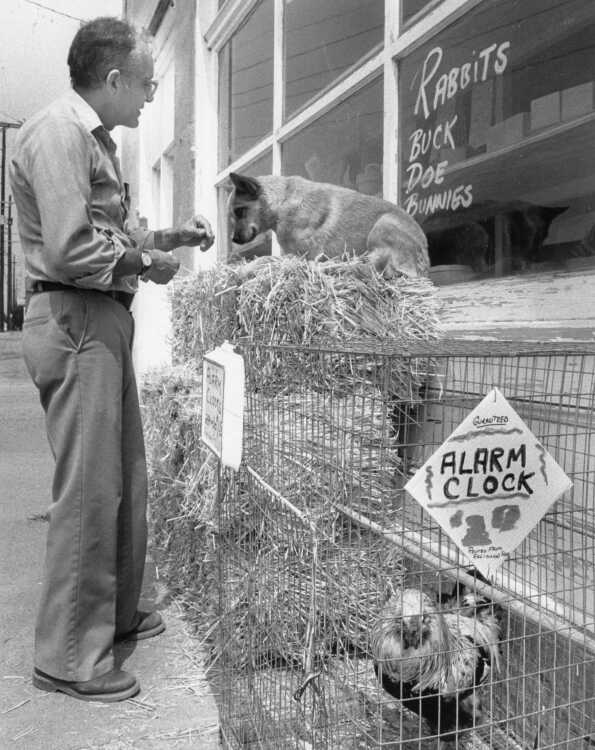 Order this photo
H.C. "Hank" Mellone, owner of Eggimann's Feed & Seed Store in Cape Girardeau, took time to play with Snuggles, the Mellones' Texas Heeler dog. Snuggles could usually be found resting on a bale of hay outside the business, 514 Independence St. Also shown here was a rooster, which Mellone referred to as an "alarm clock." (Fred Lynch/Southeast Missourian archive)

It all started with a chick and an egg

By B. Ray Owen

CAPE GIRARDEAU — When O.E. Eggimann decided to bring the henhouse from the country to the city by establishing a market for poultry and eggs in Cape Girardeau, he included a couple of clearly urban innovations.

Eggimann was the first businessman to sell baby chicks through a feed store, and he was the first to hatch eggs for his customers at a hatching charge of $1 each.

“We have incubator hatcheries going most of the time,” says H.C. “Hank” Mellone, who is just the fourth owner of the operation, which these days also specializes in garden seeds and supplies.

People still bring in eggs to place in the incubator.

"We've hatched ducks, geese, quail, pheasant, turkey and chickens here," Mellone said. "It's not something that we do for pay. It's just a service for some of our customers."

Mellone, a former University of Missouri Extension Service employee, and his wife, Norma, acquired the business in March of 1985, from the estate of A.C. "Doc" Brase, and Gladys Cain, who owned one-fourth of the operation.

The operation of this store is kind of an extension of my career," said Mellone. "I've always been a gardener, and I've always owned animals. This is my way of staying in contact with both."

The business was established in October of 1938 in a building which had housed Pollack Hide & Fur. With the late O.E. Eggimann was Brase as a partner, Eggimann sold his interest in 1946, half of it to Brase, and the other half to Mrs. Cain.

The building is much the same today as it was in 1938 -- unassuming, with slightly creaking floors, high ceilings and the pleasant, heady aroma of animal feed. There is no "Muzak" at Eggimann's, just the soothing strains of classics and, on occasion, bird call tapes.

"We love this old building," Mellone emphasized. "Our thinking here is that of an old-style store. We wouldn't even think about changing it in any way."

Although garden seeds and supplies are the bread and butter items for Eggimann's, the store is diversified in its stock.

"We're one of the few operations left which still sells seeds by the scoop," said Mellone. "We have four scoops here, from A to D, each a different size." Actually, Mellone has several scoops, ranging from the modern plastic, to metal, to the old wooden spoons used when the store was in its infancy.

In addition to seeds, the store has a wide selection of plants -- tomato, pepper and a garden-full more.

If you need horse products, dog products, bird feeders or fishing bait, the store has those items as well.

Also in the store's inventory is an old kerosene brooder heater.

"Years ago, before the electric brooders, people utilized the kerosene heaters to keep the brooder houses at an even temperature," said Mellone.

The store is also one of a handful carrying pigeon feed.

"We're probably one of the few places where you can get pigeon food," said Mellone. "We have a lot of people in this area who raise pigeons for racing."

"The 'fish truck' pays us a visit, and we sell fish for farm ponds, or for whatever use buyers have for them," said Mellone. "The buyers don't have to provide any containers. The fish are placed in oxygen and ice water, which is supplied by the hatchery.

"We have a lot of people come here and buy 100 to 200 fish," said Mellone, adding that fish feed is also available at the store.

Working side by side with the Mellones is "Snuggles," a Texas Healer who can usually be found sitting on a bale of straw in front of Eggimann's Feed and Seed Store, on Independence Street.

"Snuggies," as she is lovably called by her owners, has her own bank bag.

When "Snuggies" hears the word bank, her ears perk up, she lets out a bark, and then patiently waits until her owners give her permission to leave her hay bale vantage point.

"She's not allowed to get off the bale of hay unless we tell her," said Mellone. "She always barks when she wants off, and we tell her it's okay."

Neither cat nor fellow canine can entice Snuggles from her perch.

"She may bark, but she won't get off that bale of hay," said Mellone.

When Mellone and Snuggles go to Cape Mercantile Bank, her bank bag, with the word, "Lollipop," scribbled on the side, is passed to the teller, who puts a lollipop inside.

"Snuggles is allowed to eat the lollipop later," said Mellone.

Another permanent resident of the store is a ringneck dove hen.

"These (ringneck doves) are popular birds," said Mellone. "We sell them as soon as we breed them."

The ringneck dove hen is busy the year round, hatching and raising two young doves at a time.

"She lays two eggs and sits on them two weeks, actually 15 days," said Mellone. "When they hatch, she cares for her young three to four weeks, and they are sold.

While the ringneck dove is a quiet bird, "Alarm Clocks" are not.

"That's what we call our roosters," Mellone explained. "We usually don't keep them too long -- luckily -- before someone buys them."

The next "Special Day" coming to Eggimann's is "Ready to Lay Pullets Day," on September 19. In the meantime, it's business as usual for the Mellones, Snuggles and the 40-year tradition that started with a chick and an egg. 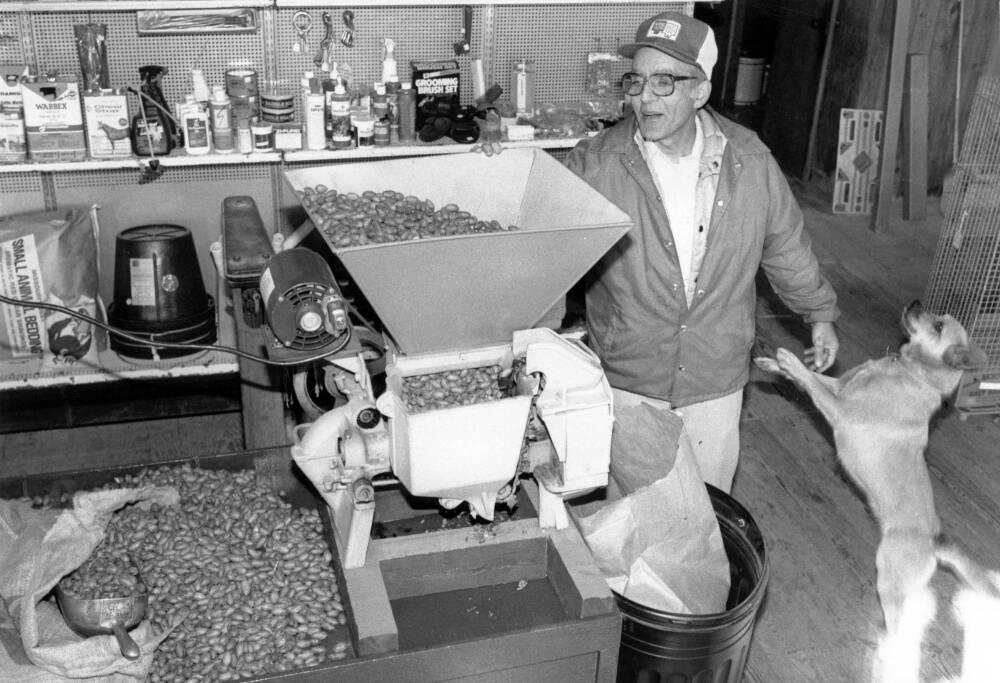 Order this photoPublished Nov. 19, 1989. Hank Mellone, owner of Eggimann Feed, 514 Independence St., watched as pecans fed through his new pecan "nutcracker." Mellone said the pecan crop was down that year, but he was still getting plenty of requests for nut-cracking jobs. Snuggs, Mellone's dog, waited for a sample from one of the cracked pecans. (Fred Lynch/Southeast Missourian archive)