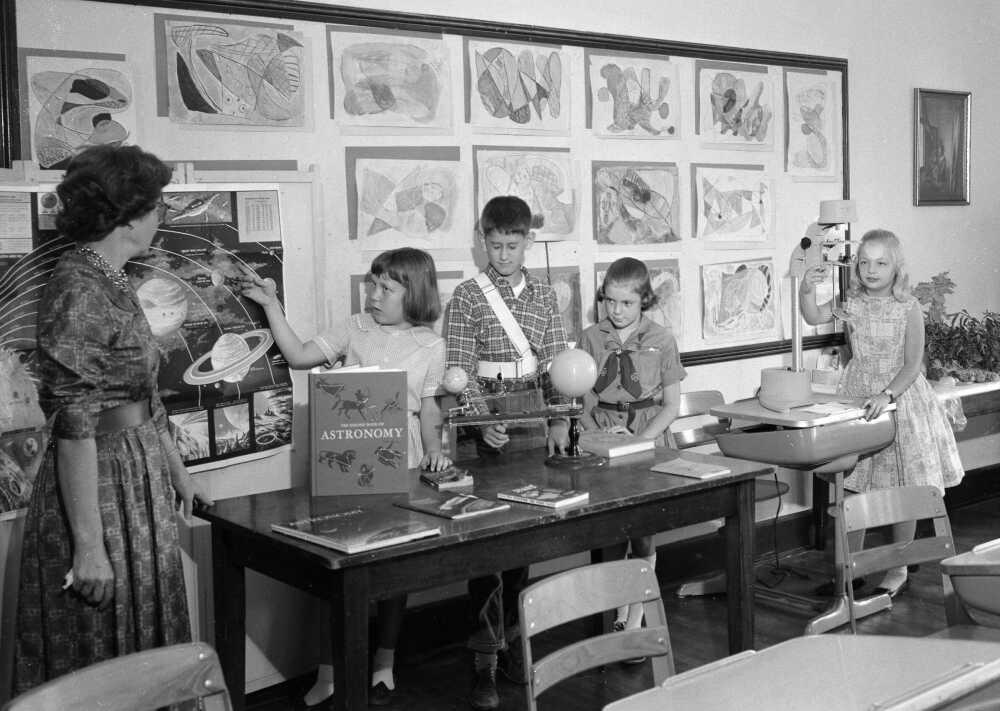 Sixth grade pupils at Franklin School study science. The teacher, Mrs. Idell Sitzes, watches as Sandra Birkman uses a colored map of outer space to point out the galaxies and to tell of lightyears. Behind Sandra, Tim Ludwig uses a model planetarium to demonstrate motions of the earth, sun and moon during their cycles, as Sally Spickelmier looks on. At right, Mary Rawlins uses a microprojector. (G.D. Fronabarger photo)

At Franklin, School of the Week

Over on Louisiana, on a terraced terrain, is Franklin School, once referred to as “that new school at the edge of town,” but now, an elementary school in the heart of the city.

Operating at capacity, Franklin’s 18 classrooms are filled daily by 520 children enrolled in kindergarten and grades 1 to 6. When the school was erected in 1927, its L-shaped wings took in considerably fewer pupils than now. To this front section and south wing were joined the north wing and gymnasium some five years later. There has been no addition to the school since that time.

Principal John Miller said, “We feel that Franklin has kept pace with the changing times. Even though it is an old school, it is still doing its job serving many youngsters. Classrooms, planned for an educational program by 1930 standards, have been altered where necessary, and fixtures and equipment are up to date.”

The Franklin graduate of the 1930s, were he to visit Franklin today, would find some changes. Gone is the old lunch room he once visited. The room is now a classroom. Today’s children have their lunch at tables in the gymnasium, economizing on floor space. The library-study hall is also a classroom, with a partition separating it from the first-aid room.

On the other hand, there are landmarks around that strike a familiar note for former students. There’s a bust of the school’s namesake, Benjamin Franklin, in the lower hall, serving as a permanent greeting to visitors and pupils. “Old Ben” has been there a good many years. (Last year he met with an accident, toppling from his pedestal. Until necessary repairs were made, he was placed on a cot in the first-aid room by sympathetic admirers.)

Principal Miller believes his faculty is “top notch.” Of the 20 teachers, four have their master’s degree, and others have done graduate work. New teachers this year are Mrs. Ruth Iahn, first grade, and Miss Darla Gatewood, third grade.

“We have made a conscientious effort to make our new teachers feel at home here,” Mr. Miller commented. “This year we had an orientation program in the local system for all new teachers, and we have tried to follow this through in the opening weeks.”

A lively group of first graders, back in their room after noon hour play, were bubbling over with comments about their first month at school. Mrs. Iahn introduced the class to a reporter whose query, “What’s the most important thing you’ve learned to do since starting school?” brought these answers:

Mary Lee Harrington: “Art work.” Douglas Blumer and Cherly Pender: “To spell C-A-T.” (The class learned to spell this word when a cat strolled into the room one day.) Rodney Wilson and Kenneth Lowes: “Gym class and playing games.” Lana Golden and Cathy Patterson: “Painting.” David Snell: “Fishing for numbers, like we did today.”

Debra Stone and Teresa Seabaugh, two bright-eyed girls from Mrs. George Weltch’s fifth grade, were seen in the hall struggling with a large aquarium which they had filled for a pet bluegill. In an effort to give the fish new interest in living, the girls had decided to change the water. Mr. Miller smiled and said a few minnows might be more appreciated.

In another room off the hall, Mrs. Lois Swink, a teacher at Franklin for 15 years, was still busy at her desk, giving little heed to the dismissal bell. Mrs. Swink has always taught second grade and still finds this age group interesting.

Franklin School, following the same curriculum as the other public elementary schools, is experimenting with the unit procedure of teaching social studies. Also called a core teaching curriculum, the plan combines research, art, speech and calling on outside speakers, with the pupils themselves working out a plan for the study. Proving popular with sixth graders, the procedure stresses democratic group process and open discussion.

A valuable aid to teaching science on the elementary level, despite crowded conditions, is the portable science lab, purchased with NDEA money. The lab on wheels can be moved from one room to another and is readily accessible for experiments or demonstrations by teachers and pupils.

Franklin is proud of its Student Council, which was organized last spring as an outgrowth of a mock election held at the height of the Nixon-Kennedy campaign. Through council projects, useful gifts have been bought for the school, and currently the group is making plans to buy a new cot for the first-aid room.

Another popular event at Franklin is the spring science fair in which many pupils participate. The Parent-Teacher Unit awards prizes to the young winners, rewarding their interest and efforts in this field.

Jack Russell, physical education instructor, has begun an intramural program which is open to all boys who have not played in competitive sports earlier in the year.

In its three-decade history, Franklin School has had only three principals, Miss Nellie Krueger, Ray Miller and now John Miller. After three years as teacher of a sixth grade at Franklin, he stepped into the principalship last year. “There’s no better work anywhere,” he observed. And he has six years in industry, plus a service record in the Korean War, to base this deduction on. “I made the switch in jobs because I want to do something self-satisfying. Working with and for children is just that. I like it!”

[A new 50,000-square-foot Franklin Elementary School that opened in 2013 replaced the old school. Voters approved a bond issue in 2010 that provided $10 million for the project that took two years to complete.]

This previous blog has pictures of the original and new Franklin School:

Franklin School, then and now