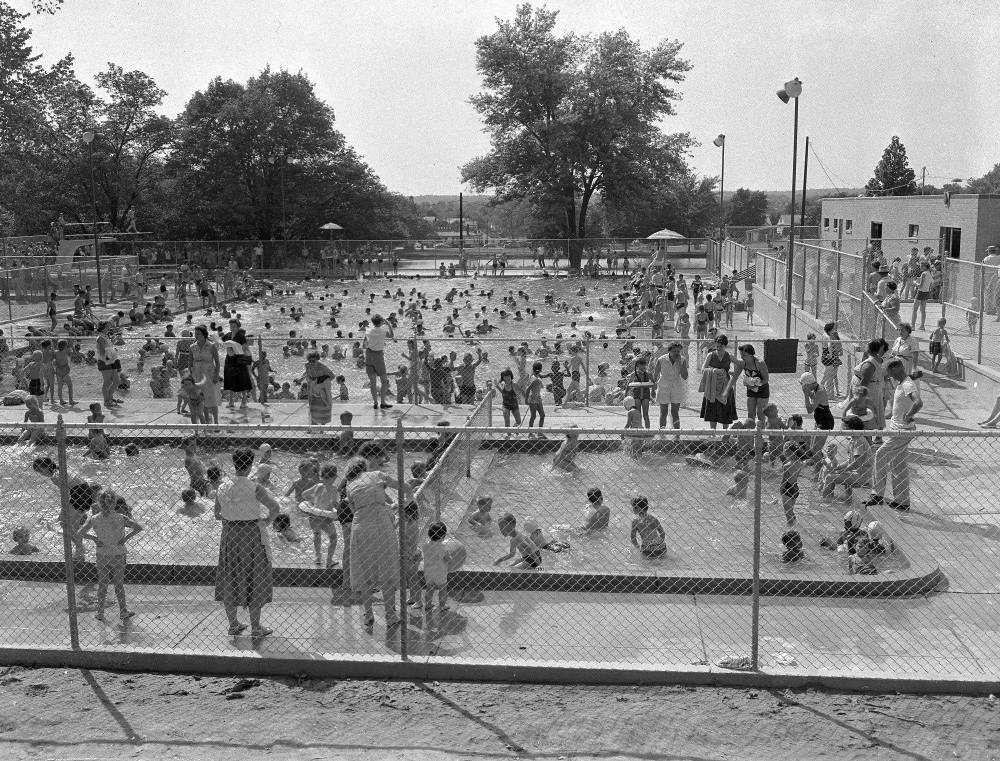 The first day for the new swimming pool at Capaha Park really brought 'em out as the picture indicates. Without a pool of any kind for a year and with only a tiny, old one for many years, swimmers found the new one just what they expected. Receipts indicated an opening day patronage of more than 1000 persons. (Photo by G.D. Fronabarger)

Hundreds Take Dip Amid Much Confusion

Anxious to try out the new swimming pool, hundreds gathered at Capaha Park Thursday afternoon for the official opening and to say they swamped the attendants in charge is putting it mildly. As Park Commissioner J.W. McBride put it, it was "a madhouse," so severe was the confusion.

However, by nightfall things had gotten straightened out and during the evening everything went off in an orderly manner, the commissioner said.

Figures indicate an attendance the first day of more than 1100. Of these 673 paid, 277 were admitted on merchants' tickets and, in the opinion of Commissioner McBride, another 150 "just got in some way" without paying. Of the number about 800 were in the pool in the afternoon.

The merchants' tickets were ones given them by the police department in lieu of tickets to a circus which the department was to sponsor, but which was canceled.

In the 18 days which it has been open, the new municipal pool in Capaha Park has earned more revenue than the old city oval did in a full season, Park Commissioner J.W. McBride announced today.

He said the pool had earned $3289.53 over the period and that 10,084 swimmers had used the pool. The earnings include $1100 paid by the police department for tickets distributed to merchants who participated in the circus promotion which was canceled.

The figures show an average pool attendance of 560 swimmers daily and earnings averaging $182.19 each day.

According to a story in the Southeast Missourian on June 18, 1959, the admission price for children's tickets was $2 for 12 swims. Adult tickets were $5 for 12 swims.