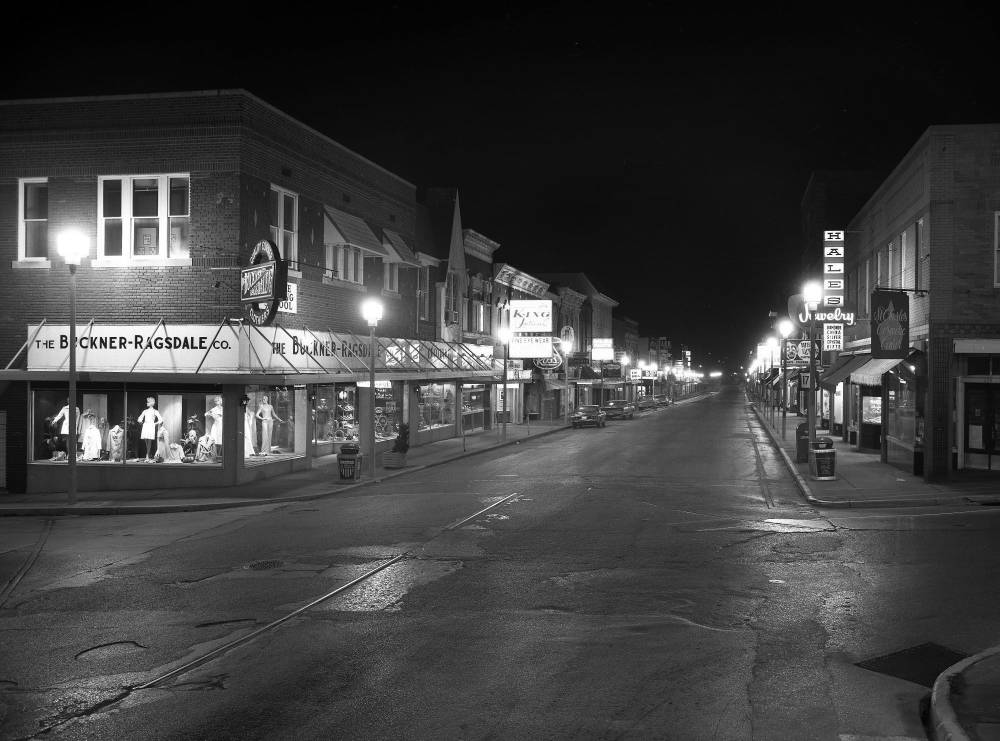 This is the latest photo we have found by G.D. Fronabarger. We believe it was taken about 1972 according to the stores listed in the 1972 city directory. Notice a remnant of a trolley track. 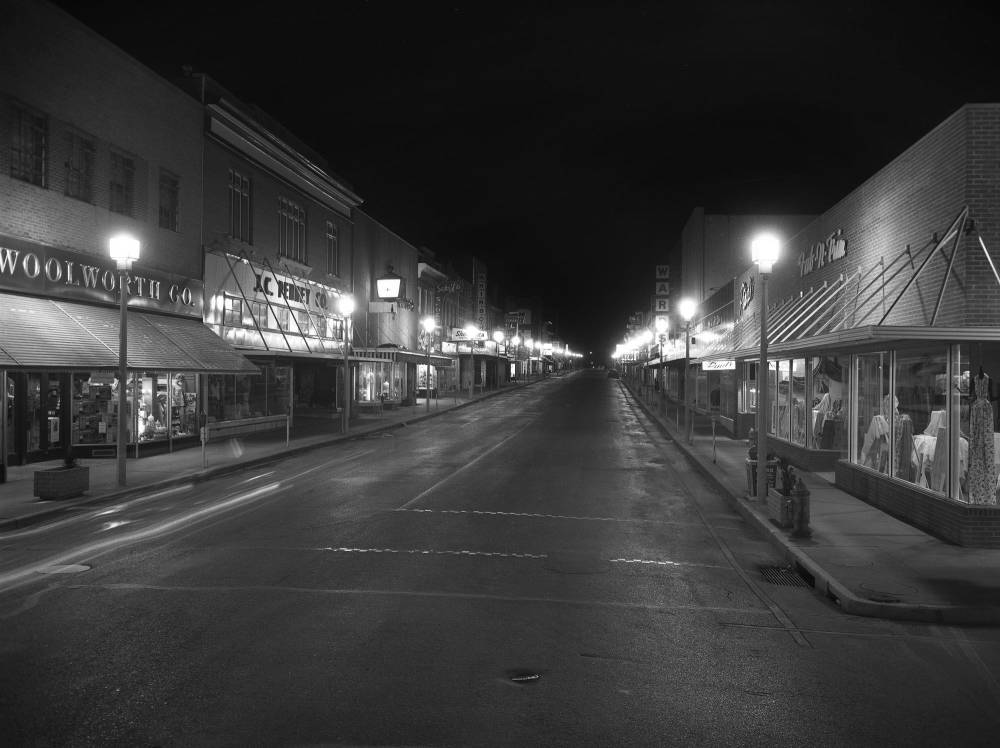 This photo was probably taken at the same time from the south at Independence street looking to the north on Main Street.

Braving the cold, crisp air that registered 38 degrees on the thermometer, an estimated 500 persons early Thursday night attended opening ceremonies on the First National Bank parking lot for the three-day celebration of Cape Girardeau's downtown white way lighting system. Many more were in cars or elsewhere in the area.

Robert E.L. Lamkin of the Buckner-Ragsdale Co., who has spent 65 years in business on Main street, threw the switch to turn on the decorative and larger luminaries shortly before 7 o'clock. An area on Water, Main and Spanish and cross streets of Broadway, Merriwether, Independence and Themis, which had been in darkness, began to blaze with glowing rays.

"They're brighter...they're prettier...they should be extended up Broadway" were a few of the comments heard as shoppers crowded into stores and on the streets.

Within half an hour, many of those in the downtown area were laden with packages as they took advantage of the special bargains offered by merchants. More shoppers were downtown today and still a large number is expected Saturday as the celebration continues.

The new white way system is a project of the Cape Girardeau Metro Association. Property owners and merchants in the benefited area paid the major part of the $139,234 project cost with the city and Missouri Utilities Co. also sharing the expense. Southwestern Bell Telephone Co. participated by placing its telephone cables underground and is in the process of removing its old wooden poles and overhead wires from the downtown area.

At the ceremony, Robert B. Hendrix, executive vice president of the Cape Girardeau Chamber of Commerce, paid tribute to the cooperation that resulted in the project.

Mayor Pro Tem Bradshaw Smith, representing the City Council and citizens of Cape Girardeau, called the white way system a dream that became a reality. He expressed the community's appreciation for the project, commended Metro members for their progressive thinking and said the project is "an outstanding job...a fine asset to the city."

Norman H. Ueleke, president of the Metro Association, introduced the speakers and other platform guests.

In his remarks, Mr. Hendrix said the idea of a white way lighting system was born many years ago in a meeting of what was then called the Downtown Merchants Association, now expanded to the Cape Girardeau Metro Association.

"By the cooperation of merchants, property owners, the city, Missouri Utilities Co. and Southwestern Bell Telephone Co., we now have the finest lighted shopping area in the country," Mr. Hendrix said, emphasizing it was done with all local funds and that not a cent of federal money was involved.

He said that some citizens will wonder how the new lights will help them, maintaining the merchants sponsored the project for their own good.

"Sure, they did it for their own good. Every businessman here and anywhere else in the country is in business only as long as he can make a profit. Profit is not a four-letter word as some would have you believe," he stated.

Profits are a source of taxes for all levels of government which, in turn, pay for better schools, streets, fire and police protection.

"Without the taxes that profits provide, we would still be driving Model A's on dirt streets lighted by candles," he said.

In conclusion, Mr. Hendrix remarked that "profit and cooperation both were needed for this project and I salute those who used both."

Miss Paula Kester of Scott City, a beautician who works and often shops in Cape Girardeau, remarked on the noted difference in the new white way system and old lights. "I'm looking forward to doing my Christmas shopping in the area, it's much brighter. I think a shopper will feel more safe with the brighter lights and I'd like to see them extended up Broadway," she said.

Here from Chaffee for the ceremony were Mrs. Naomi Lauck and her son-in-law and daughter, Mr. and Mrs. Roy Surface. They said they had not shopped too much in Cape Girardeau at night, but believed the downtown area is now much more attractive to nighttime shoppers with the new lighting system.

"I don't think you'd get mugged in these bright lights, although I thought I might before the lights came on, it was so dark," Mr. Surface commented. He said he would like to see the white way system on Broadway, Independence and William.

"Even to Chaffee," Mrs. Lauck said.

And then a reporter heard a man jokingly remark, "I'd like to see them all over town -- I sold them." He was James W. Briscuso of the Graybar Electric Co. of St. Louis, who was here for the celebration.