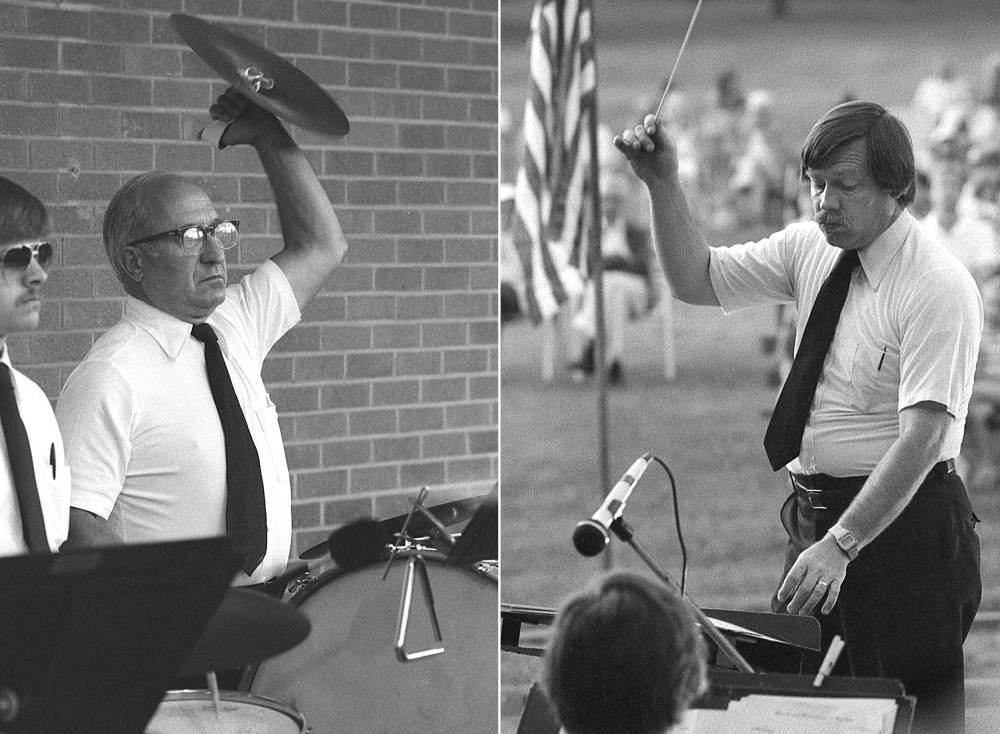 ABOVE: Alfred Jones, left, adds percussion sound to the Cape Girardeau Municipal Band. Here he waits for the right time for a cymbal crash. At right, director Jon Fisher leads the musicians during a Wednesday night concert at Capaha Park. BELOW: A line of trombonists are in full form here during a concert. They are, from left, Marlin McCutchen, Rick Shell, David Little, Fred Goodwin and Mark Goodwin. (Fred Lynch photos) 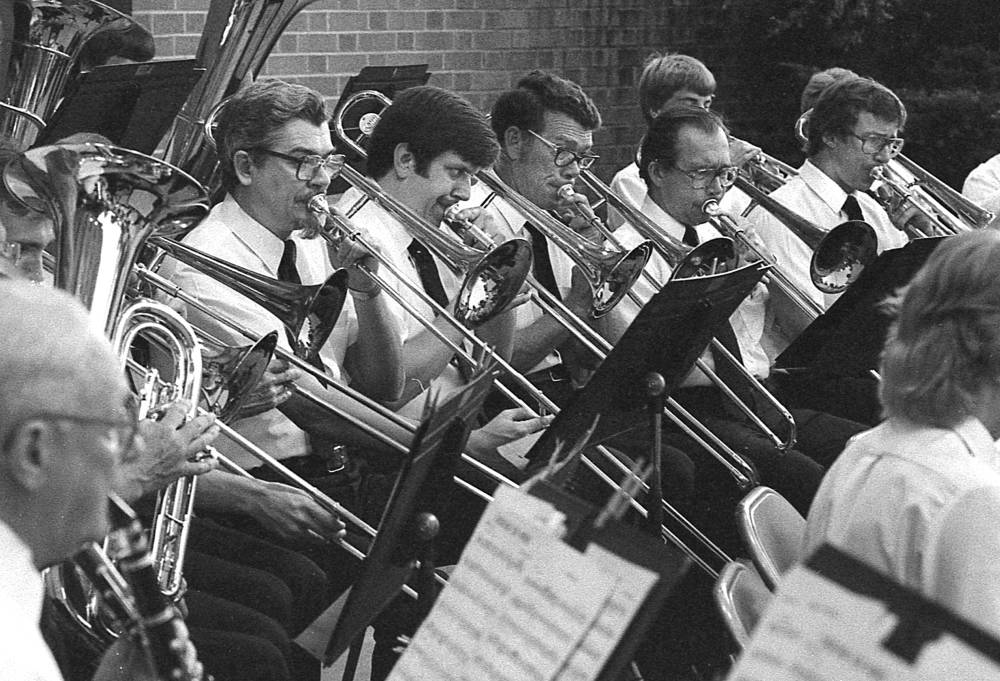 It may be seventy-six trombones leading the big parade, but they're most likely marching to the rhythmic sound of the big, bass drums.

There's something about the steady rat-a-tat-tat or the boom-ba-ba of a band's "meat and potatoes" instrument, the drums. That something snared the interest of Alfred A. Jones many marches ago.

Jones, who retired in 1980 after 38 years with Missouri Utilities Co., is familiar to most everyone who attends the summer concerts of the Cape Girardeau Municipal Band. And the bass drummer ought to be familiar--he's been with the band a half century.

After graduating from high school here in 1933, Jones was an "apprentice" with the band one year. After the regular bass drummer decided his business interests would preclude his continuing with the band, Jones took his seat. "And I've been playing ever since," he says.

Outside of one year with the Navy (a year he spent with the prestigious Navy Drum and Bugle Corps at Great Lakes), Jones says he has never missed more than a half dozen concerts. "Out of about 700 concerts, I've been there for 694 of them," he proudly adds. Jones has been an officer of the band or on its board since the 1940s.

An interest in music "was in my blood," Jones says. He took violin lessons with his great-uncle, Charles Armgardt, the band director at the old Normal School, now SEMO State University. Jones began playing drums in the May Greene School band, a small group directed by the high school band teacher. From there he went into high school band, and in 1929 started playing with a small dance band to make a little extra money.

Although he is not an original member of the Muny Band, Jones is well versed in its history. The late William G. Bock organized the first band here. It carried the lofty name of the Eutonia Coronet Band, and was established in 1881.

There was a Cape Girardeau City Band around 1893, and Schuchert's Band, apparently an outgrowth of the former, was organized soon after. For years Dr. C.E. Schuchert directed the group of musicians. It was after World War I (the band enlisted en masse) that the group reorganized and gave itself the name it carries today.

During the late 1920s, two band members, Schuchert, a dentist, and Arthur W. Harrison, a businessman, were instrumental in promoting passage by the state Legislature of a bill enabling cities of under 20,000 population to levy up to two mills to underwrite band expenses. The bill was signed into law in 1927. Prior to that time, the band raised funds primarily by playing at county fairs and picnics.

It is the band's tradition to begin its concert season on Memorial Day at the service commemorating the war dead, Jones says. "The band used to march up to old Lorimier Cemetery from the (Common Pleas) Courthouse. That was in 1934 or '35. There was always a speaker, and wreaths were placed on a few graves. Later on, the ceremony was moved to the riverfront, and a plane would fly over and drop a wreath over the Mississippi." In recent years, the observance has been held at the veterans' memorial in County Farm Park.

Jones says he finds it amusing that some of his fellow band members now are the children and even grandchildren of men he played with years ago. He recalls that he and his wife and the parents of present band director Jon Fisher used to double date.

Jones also remembers when band concerts were held in the old bandstand in Common Pleas Courthouse Park. "Doc Ford (the late Walter H. Ford, former Cape Girardeau mayor) would bring his boys, Walter Joe, Jerry and Don, down to the concerts." One day when he was at the Ford home reading a basement utility meter, "I came back up, heard some noise and found four or five neighborhood kids having a march. One of them had an old tin bucket and they were arguing over who would be Mr. Jones," he fondly recollects.

Jones (along with a good many Muny Band members) was also a member of the old American Legion Drum and Bugle Corps, a group which took the state championship in 1950, 1951 and 1952 and later placed 13 in the nation two years and fifth in the nation the third year. At the 1952 event, in Los Angeles, Jones recalls that the group was personally congratulated by Hollywood mogul Cecil B. DeMille. "We did a 60-man complete turnaround in a straight line. He said he didn't see how we could do it," Jones notes.

Many of the tunes that fill the warm summer evenings at Capaha Park are ones that Jones knows by heart. Even after 50 years, "the concert seasons seem to go so fast," he adds. "I've made lots of friends over the years through association with other band members. It's always fascinated me about all the different facets of life they come from--doctors, lawyers, businessmen, music teachers. But we're all doing our best to play our instruments. Our one common denominator is to play the best music possible. Our love of music is far greater than the small check received for our services."

Jones loves his music. And when he's on stage he's reaping another benefit as well. "When I'm playing music, there's only one thing in mind. Watch the music and watch the director. If I had a problem before I went to the concert, the slate was clean and I could face whatever problem it was when I came home."