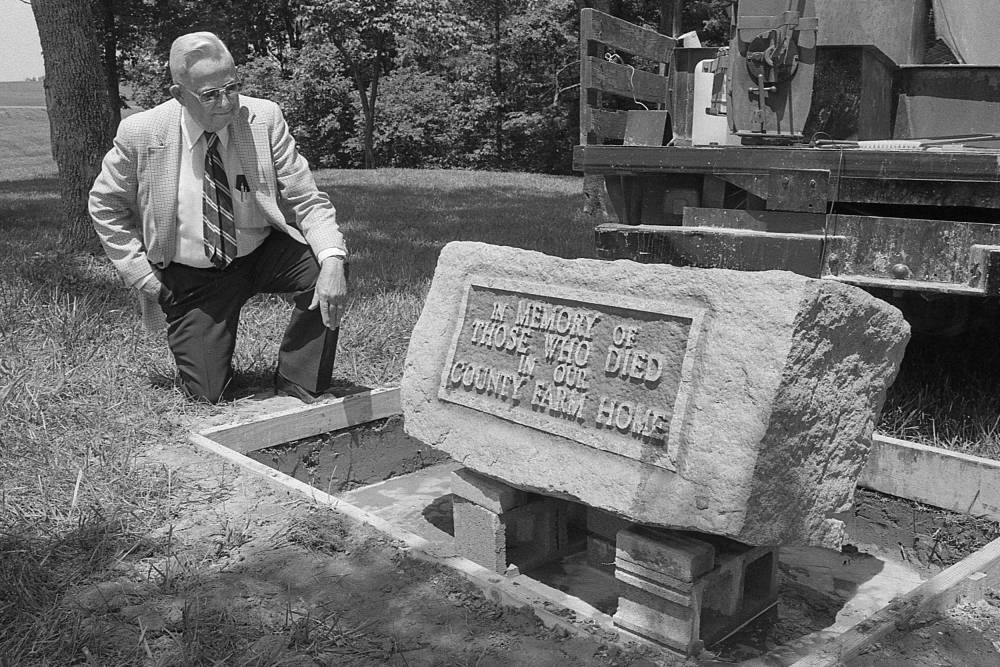 A.C. ("Doc") Brase of the County Farm Board shows one of the monuments set in place at County Farm Park as a memorial for persons who died in the County Farm Home many years ago. There are no exact records of how many people died at the home, or how many are buried on the grounds. Some estimates, however, are as high as 700. (Fred Lynch photo)

Trudging over the hill...to the poorhouse

Over the hill they came, some old, some ill, some young, some well, most penniless, all together in body and all alone in spirit.

Some of those who found their way to the County Home for the Friendless in operation at the site of the present Senior Citizens Nutrition Center at County Farm Park from 1875 to 1956, stayed only days before moving on. Some were in residence months, and some, years. Some never left.

Little Maggie Suckaw, mother dead, father in jail, brought to the County Farm one cold November day in 1891 is still there; so is orphan Eddie Morgan, periodically in and out of the farm from the age of 13 until his death at the age of 25; and there's "Axe-handle John," a German native who brought his craft of fashioning handles for woodchoppers. The nameless, five-day-old infant deserted on the steps of the farm never left; neither did Mr. Schaefer, a horse collar maker for nearly half a century.

Maggie and Eddie and John are but hundreds of the lonely people whose final resting place was Potter's Field on the County Farm. That there were ever cemeteries on the land (there were two, one for whites and one for blacks) has long been forgotten by many. Only slight indentations in the earth where old graves have settled offer a clue.

For those buried in Potter's Field, there was no ceremony. There was a wooden casket, laid to rest without tears, unmarked, overgrown in a short time with brambles. In its 70 years, the County Farm served a total of 1,888 inmates, records indicate. Its often haphazard registers show only a fraction of those who died and were buried there; some have estimated the deaths there to be more than 700.

A.C. ("Doc") Brase said that the memorials were put at the cemetery sites after so many years because "these people deserved something." As early as 1923, the County Court had urged that the graves be marked, records show.

The massive red granite stones were donated by a quarry near Ironton.

"I've always felt these people should be recognized," Brase commented. "They were human. It was unfortunate they had to go in the home, but there was no place else for them to go."

While federal and state governments have assumed much of the responsibility today for the care of the indigent and the elderly, that was not the case during the earlier years of the farm's operation, Brase noted. "A few people just had to go to the poor farm," he said. "They had no choice. But their graves should be recognized."

The structure that originally served as the almshouse was replaced with a new $40,000 building that opened in late 1923 with much fanfare, and the announcement that each of the farm's inmates received a change of clothing and a bath upon moving in to occupy the new quarters.

The floor plan of the new building included two wings, one for men and one for women, divided by a common dining room where food was dished up, Army chow line style. Poorhouse inmates who were able raised chickens and other animals on the land, did gardening and were responsible for keeping the poorhouse clean.

Years ago, it was common to "farm out," most generally to a relative, those persons totally unable to earn a livelihood. In "farming out" people, the County Court allowed a stipulated sum every three months for the support of poor persons. However, that practice was discontinued entirely in 1916, and all the indigent were forced to enter the County Farm.

The people who came to the poorhouse may have shared a common bond of poverty, but they had very diverse backgrounds. The registers show birthplaces of inmates from England, France, Germany, Ireland, Missouri, Tennessee, Illinois, Kentucky and much of the Eastern Seaboard.

Their reasons for coming were just as diverse. Carefully recorded under "disease" in the farm registers are such maladies as "deaf; lazyness (laziness), fits; whiskey; old age; palsy; dropsy; wound; pregnant; no home; chills; sore feet; nearsighted; foolish; deadbeat; simple; crippled and cranky; fallen woman; dope fiend; old scamp..." There were special notes by some admissions, including a 12-year-old girl admitted for "boils" and a 2-year-old admitted as a "poor forsaken baby, mother ran off." And there was "Irishman," who apparently thought there were snakes in his boots.

Some orphans at the home were fortunate enough to have the scribbled notation "adopted" beside their names. But the unlucky many were sent on to an orphans home.

One 92-year-old woman came to the poorhouse, stating simply that she "wanted a rest." She remained there, resting, until she died a year later.

The farm had superintendents (there were 10 in its 108 years), and also a County Board of Visitors charged with overseeing conditions. A furor was raised in 1923 about what were described as "deplorable" conditions. A Missourian news account details a group of horrified women board members finding a dying man alone and uncared for in the basement of the farm.

The news article notes that a plain wooden casket had been placed near his cot, apparently awaiting the purpose for which it was intended. When the old gentleman died, the news account noted that there was a "whisper and shake of the head as the news passed around, but that was all. Such things had happened before, they said."

There generally were between 20 and 40 inmates at a given time at the home. In the 1930s, records show the average cost for keeping an inmate at the poorhouse was about $100 per year.

When the institution closed in 1956, there were still 11 inmates listed on the books. They were transferred to other facilities. For some years, the facility was used as the home of State School 11 for the Handicapped. More recently it had been the site for the Cape County Nutrition Center.

Read about the closing of the County Farm Home with a photograph from 1952 in this previous blog: