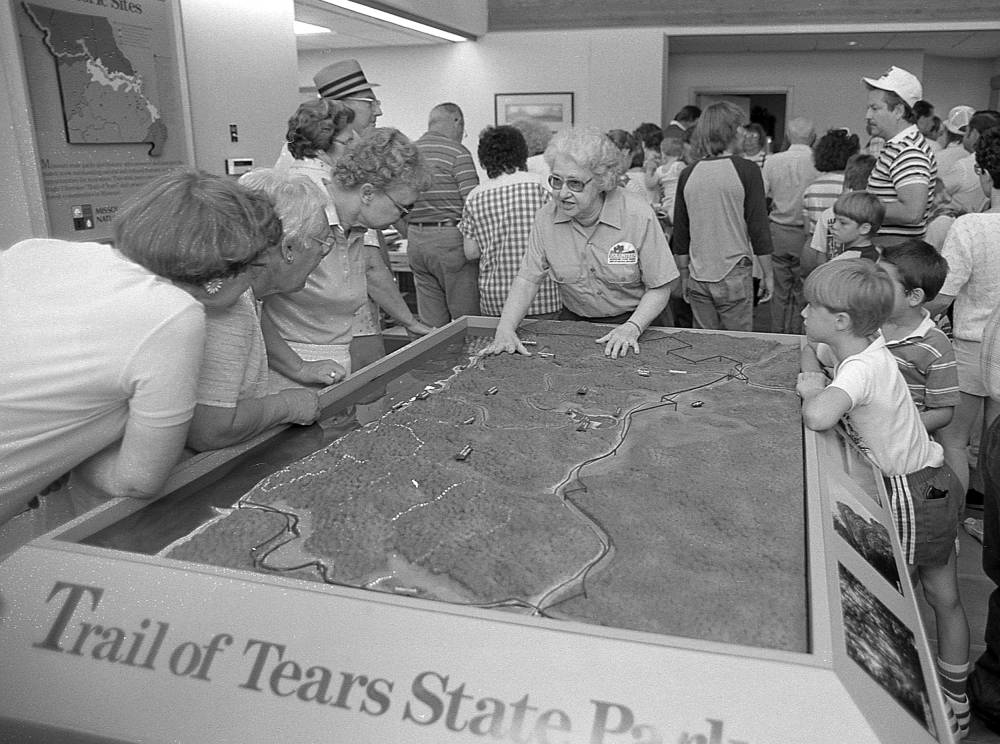 Marie Exler, a volunteer at the new Visitor Center at Trail of Tears State Park, explains the center's topographic model of the park to guests after the dedication ceremonies for the center Sunday. The center includes displays concerning the park's natural and cultural history. (Southeast Missourian photo)

Tragic Trail of Tears recalled with dedication of park center

CAPE GIRARDEAU - A tragic event in American history was remembered Sunday at the dedication of the new visitor and interpretive center at Trail of Tears State Park.

The tragic event was the forced exodus in 1838-39 of more than 13,000 Cherokee Indians from the southeastern United States to Oklahoma.

The harsh journey took its toll on the Cherokee people; one-fourth of them died on the 1,200-mile journey, whose route has become known as the "Trail of Tears."

The state park here is named as a memorial to the Cherokee Indians because the Trail of Tears route went through the park area. The new $501,000 interpretive center contains a number of displays highlighting this infamous chapter in American history. Natural features of the park land are also highlighted in the center.

Trail of Tears State Park is the only state park in Missouri that borders the Mississippi River. Its rich soil supports mature hardwood forests of white oak, black oak and hickory covering the rugged hillsides.

Park officials say more than 300 people attended Sunday's dedication ceremony, which was highlighted by an address by John Ketcher, deputy chief of the Cherokee nation, which is headquartered in Tahlequah, Oklahoma.

"As we meet here today, we hope we will remember this event in our tragic history so no one will ever again have to be removed from their land unless they want to be," remarked Ketcher.

It's been almost 150 years since the Cherokee Indians traveled through this area on their migration to Oklahoma.

"They left no monuments in their passing, but the land itself is a monument," noted Wayne Gross, director of the Missouri Division of Parks, Recreation and Historic Preservation.

He noted the rugged landscape of the 3,307-acre park looks much the same today as it did when the Cherokee Indians wearily marched through the area.

Gross pointed out that the Cherokee Indians had attempted to retain their homeland in the southeastern United States through legal and constitutional means.

"They bargained and negotiated and signed treaties, and they even gave away some of their land," said Gross.

But eventually, in response to pressure from settlers, President Andrew Jackson signed a bill in 1830 authorizing the removal of the Cherokees, who lived in North Carolina, Georgia and Tennessee.

Today, the Cherokee nation continues to survive. The nation itself is situated in the 14-county area of northeast Oklahoma.

"We are a new government; it is one that has been developed in the last 15 years," he noted.

For many years, the Cherokee chief was appointed by the president of the United States. But under the new system of government for the Cherokees, the chief is now elected by the Cherokee people. There is a 15-member Tribal Council which governs the nation.

"The Cherokee nation is involved in education, job training and health--in all areas that our people may need assistance in," noted Ketcher.

More than 85,000 Cherokee Indians throughout the U.S. are considered to be members of the Cherokee nation, he said.

Ketcher noted that early in their history, the Cherokee people decided that education was important in dealing with the white settlers.

"We have made great progress because we have been able to work together in a cooperative effort," he stated.

"We are surviving and we are doing great, and we invite you to Tahlequah, Oklahoma, the headquarters of the modern Cherokee nation," Ketcher told the crowd.

President Ronald Reagan's signing of a bill last year establishing the Trail of Tears as a national historic trail is helping draw more public attention to the heritage of the Cherokee Indians, Ketcher commented following the dedication.

He noted that plans call for a "Trail of Tears" interpretive center to be established in each state along the route of the Cherokee exodus.

Ketcher said the Cherokee government is working to preserve the tribe's proud heritage.

During the dedication, state Rep. Marvin Proffer (D-Jackson) praised the efforts of Cape County citizens in development of Trail of Tears State Park.

He noted that the land on which the state park is located was purchased by the citizens of Cape County in the mid-1950s with proceeds from a special bond issue.

After the bonds were paid off, the land was given to the state of Missouri with the provision that it be used as a state park and named as a memorial to the Cherokee Indians.

"Let's always remember our heritage and our past, and make the future better for all people," state Proffer.